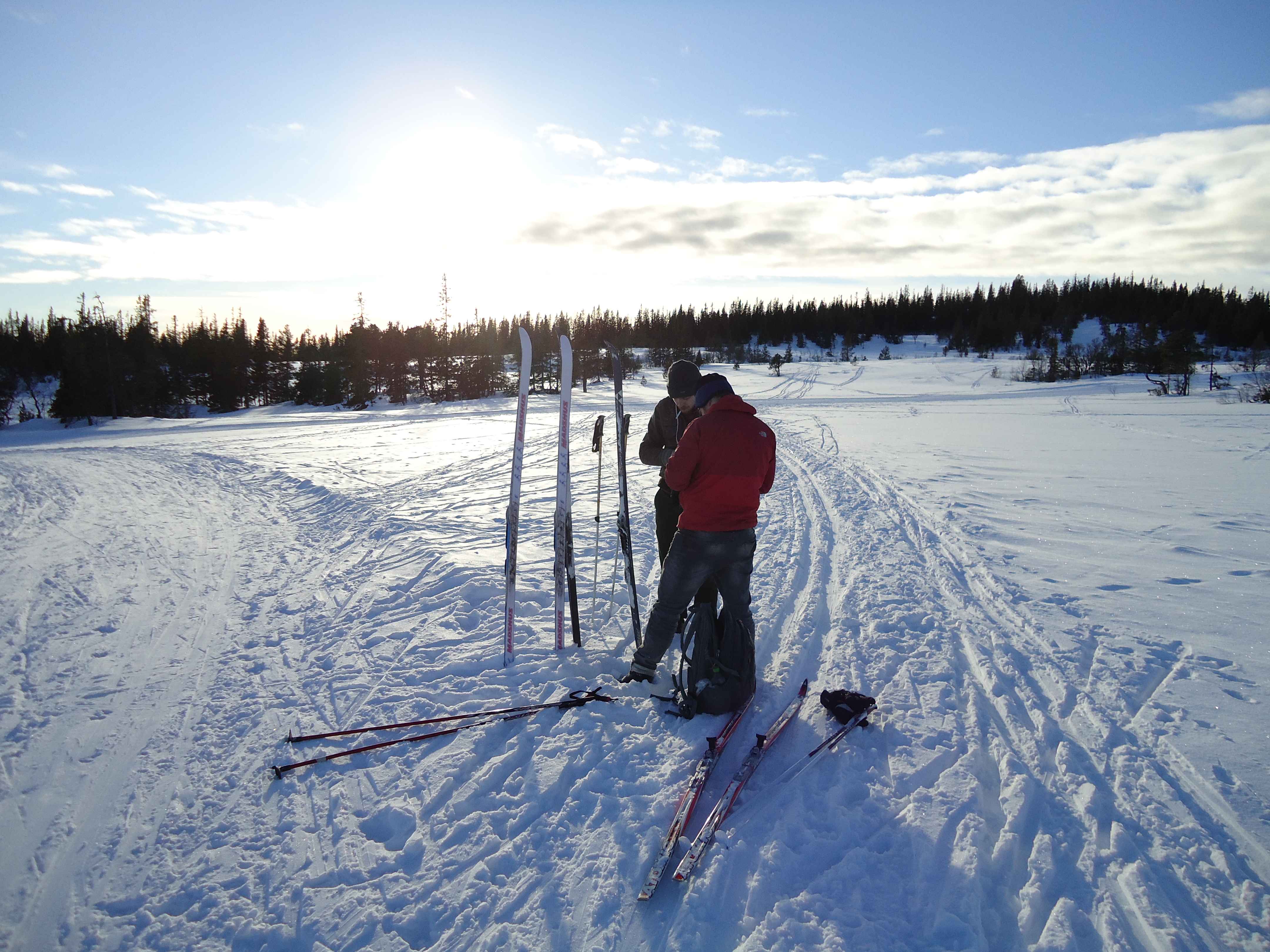 On the 17th of february my brother JR, Dieuwertje, and I embarked on a 4500 km trip to Trondheim and back. We and Brutus started driving in the morning at around 9:00, after some shopping and filling up on diesel. First, we would pick up JR in Zwolle. He left Terschelling very early to be able to meet up in Zwolle at around 10:00. This worked out perfectly according to plan, so at 11:30 we reached the border of Germany. There we tested Brutus’ maximum speed, which is 175 km/h. Surprisingly it reaches that speed very rapidly so I suppose it is limited somewhere. No worries, because going 175 probably causes a vortex in the tank.

Near Ostetal we filled up on Diesel again (tank and 2 jerrycans) and carried on. We carried on with a slight miscommunication about who would actually pay the diesel, so that none of us actually did. We noticed this about 50 km down the road. Luckily we were able to deal with the police (in German! *proud*) very efficiently and we could leave the money in the next gasstation so we wouldn’t have to circle back.

At around 17:00 we crossed the Danish border to enter the sloping landscape of Jutland. Before leaving we decided to only drive, and not take any ferries. So at 19:00 we reached the Storebælt bridge with quite a breeze, and the Öresund bridge at 21:00 with almost no wind at all. At 0:30 we finally reached Göteborg, for our stay in a hostel. For me it was a 16 bed male dormitory that smelled like an old cheesefactory, while my brother was “lucky” there was confusion over a bed. He was placed in a much smaller, less smelly, dorm room. Dieuwertje stayed in a 12 bed female dorm, that was probably perfect.

The next day we got up at 8-ish and managed to leave at 9:30. Well done! It was a long day of driving. We had a little break in fucking Åmål and near Flipstad (:P). We changed about every 2 hours and at 22:30 we arrived in Åre, where we met my good friend Nina and later her house mate Maureen in the cabin that she booked for us. 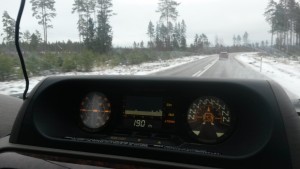 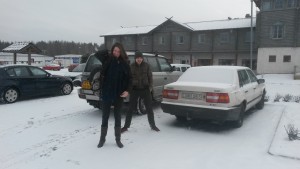 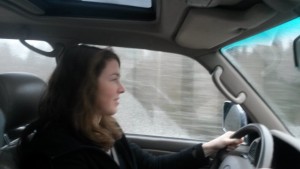 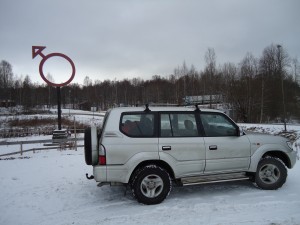 3 days of snowboarding, cross country skiing and walking around! After a night at -17C we noticed that a bunch of window washer fluid leaked out from under the car. I found out that the fluid should be fine up to -20, so the cause of it is still a mystery. There was a lot of fluid left, so we had no trouble with it afterwards. 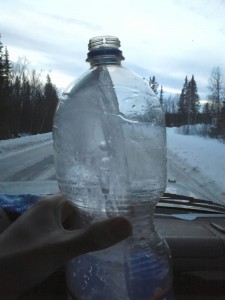 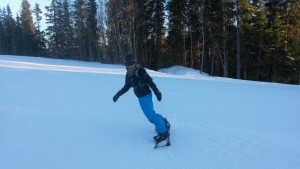 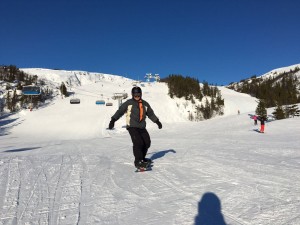 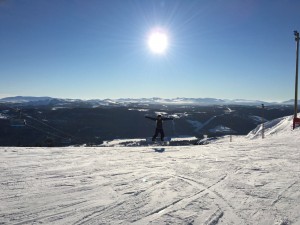 The 21st of February we left from Åre to Trondheim where we arrived at 19:00 at a friends (and my old) place. Nostalgic. The roads were icy but traction was still fine.

In Trondheim I met some old friends over the course of 3 days. Stefan, Yngve, my old choid (A Cappellissimo), old colleagues and friends. It was great! We also managed to squeeze in a day of cross country skiing in Bymarka, a nature reserve near Trondheim. 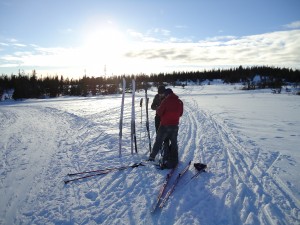 We taught Dieuwertje how to glide downhill, and within no time we were on our way to find a spot to make a campfire and grill some pølse, like real Norwegians! 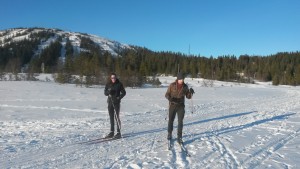 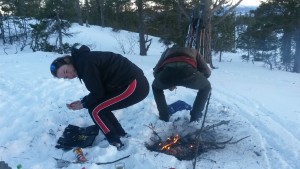 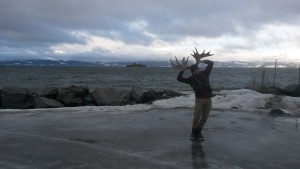 JR showing off his antlers

On the last day of our stay in Trondheim, Stefan defended his PhD thesis. After this, we had a couple of beers at a friends place. In the evening there was a dinner and party at Festningen. Good times. 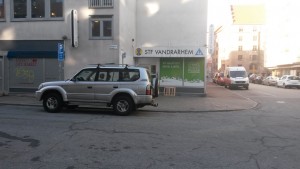 The next morning, at 7:30, after a few hours of sleep, we drove off in the direction of Malmö. This distance might have been a little ambitious, but after a brutal 16 hour 1100 km drive through snowy mountains and over icy roads, we made it! Desperately needing sleep, we put the car right in front of the hostel, and went to bed.

After a small delay due to a fine, sore foot, and slow breakfast, we managed to get on the road at 9:30. Not too bad, taking into account that we “only” had an 11 hour drive left. The plan emerged to drop JR off in Harlingen so he could fetch a ferry back to Terschelling. This worked out as planned, and with about 45 minutes to spare, he was on his way over the Wadden Sea to Terschelling. After that Dieuwertje and I continued to Amsterdam. By this time my foot was really sore but luckily it was Dieuwertje’s turn to drive.

When we arrived in Amsterdam we noticed this: 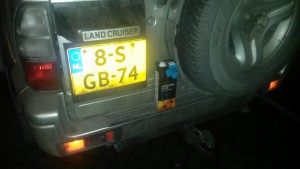 The last stretch was about 35 km to Utrecht. Made it!

Thanks JR and Dieuwertje, for this great nostalgic trip to Trondheim!