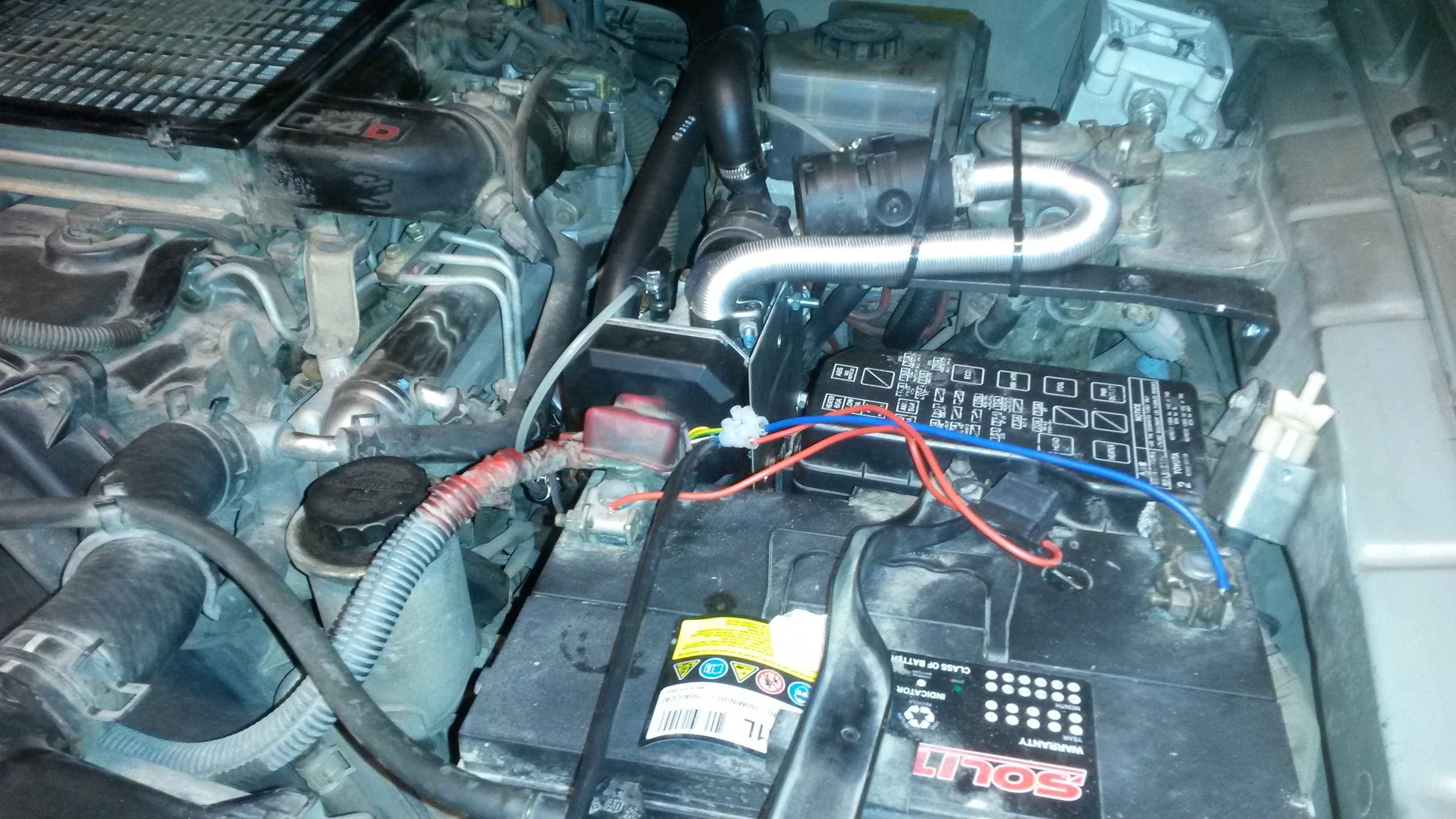 Since my last post I managed to install my secondhand Webasto Thermo Top C diesel heater in Butus’ engine compartment. Here I will shortly describe how I did that, might anyone attempt to do a similar thing. Sorry if my terminology is a bit vague but my mechanical English might be a little rusty.

First I went looking for manuals, images and forums online that could help me to identify what I would need to start the install. The basic idea is that this heater heats up your coolant, so that the engine is warmed up to be able to start better and cleaner in cold weather situations, and also for the heat exchanger to be able to warm up air for the compartment. The heater has a bunch of connections. These are: coolant fluid in and out, air intake and exhaust out, electricity in for the water, air and glow plug

Also the heater needs to be installed inside the engine compartment somehow. Webasto deliver standard build-in sets with their product that are specific to car brand and model. The Land Cruiser KDJ95 build-in set however, was no longer available, so I went to a shop to fetch the parts I thought I would need. These included a pre bent coolant fluid hose, a bunch of clamps, transparent fuel lines, clamps and connector tubes, A metal exhaust hose with red isolation clamps, and an air intake hose (metal) to connect to the air intake filter that was delivered with the heater.

The manual first instructed me to reposition a few parts and cables inside the engine compartment. These included a relay box, fuel drain hose and some fuel lines and electrical wiring. 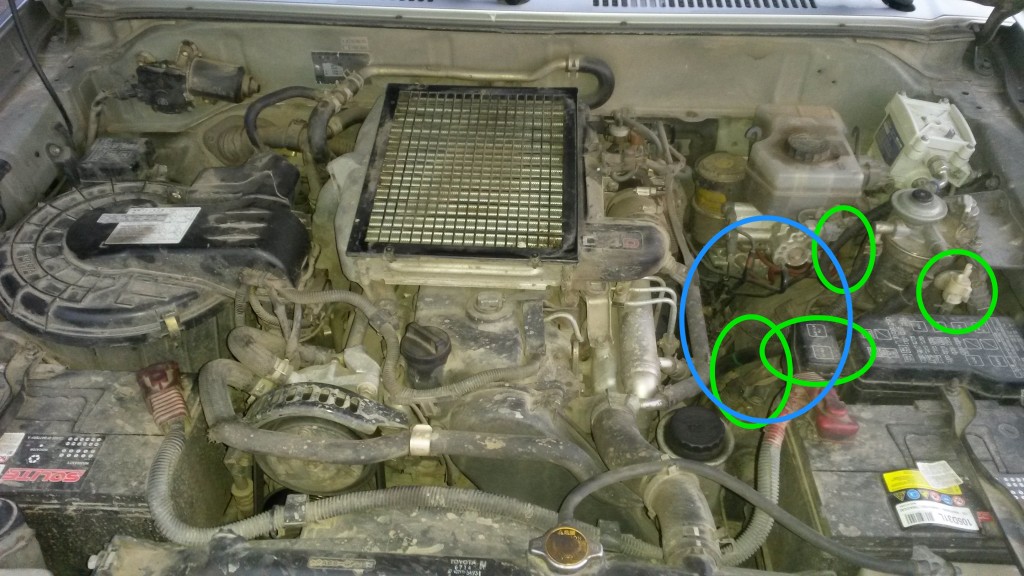 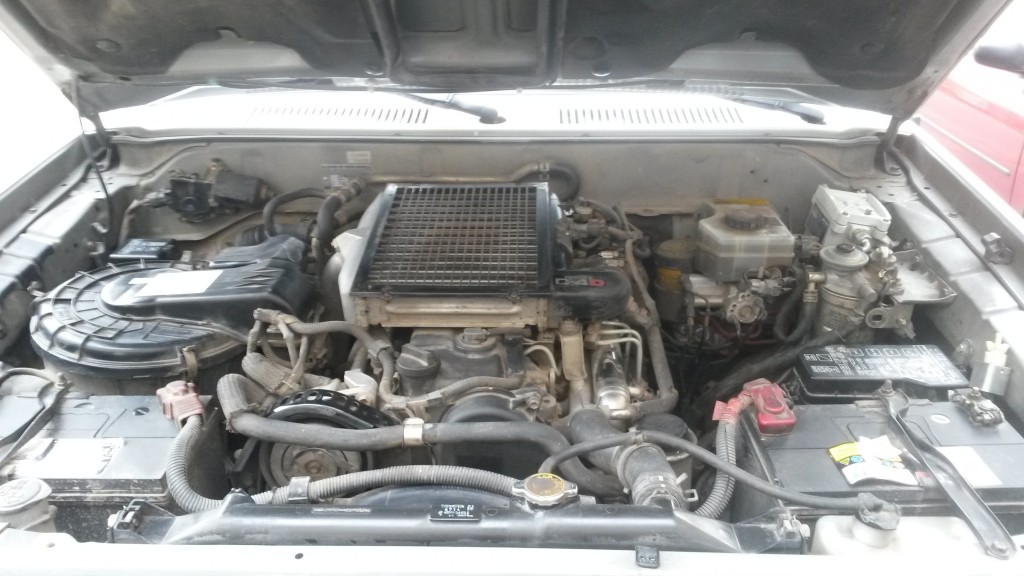 To install the heater in the compartment I needed some metal parts. So I started looking around what I could use to connect the engine to. I found a metal rod and a stainless steel plate that seemed perfect to connect the heater on. I needed to bend the plate so the bottom side would line up with the wheelwell. 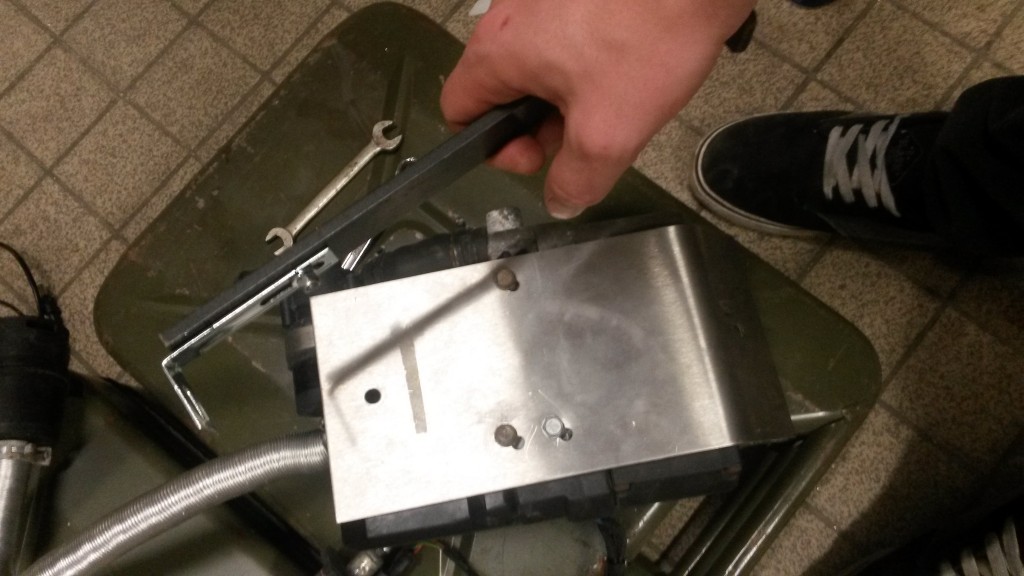 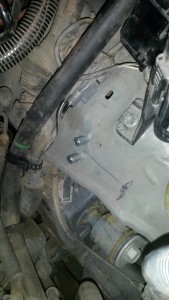 After fitting the heater to the bent metal plate I drilled some holes in the wheelwell. I took some measurements, but nothing too precise. Then I mounted some spacer bolts on long nuts to go through the wheel well and placed the bracket in the compartment to see how it would fit.

After this I unmounted the bracket again to connect it to the heater. finally I installed the whole packaged and it fitted like a glove. The exhaust tube should lead to the wheel well so I needed to remove the battery to be able to mount it under there. 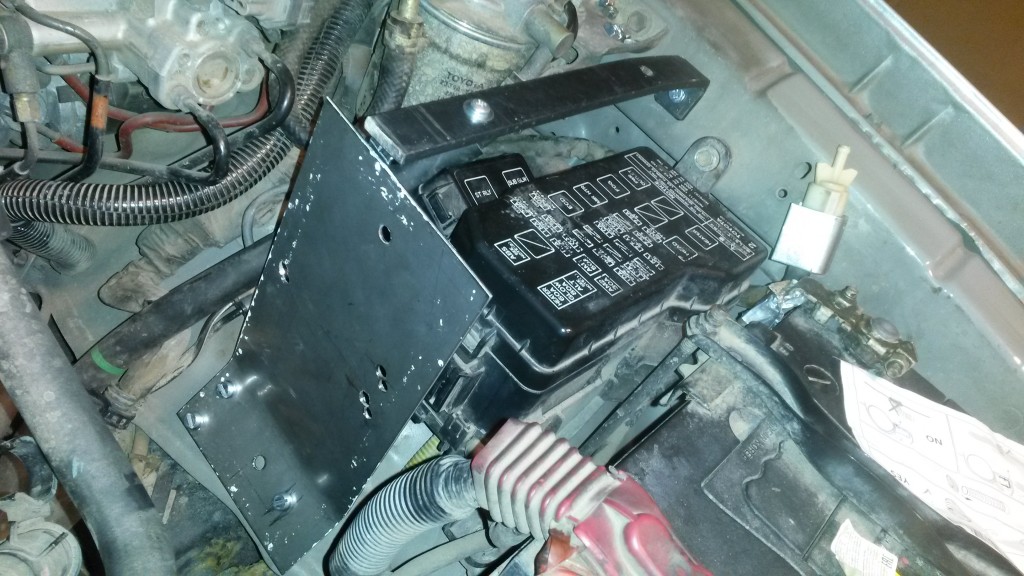 When the exhaust tube was finished I started pre-cutting the coolant hoses. They needed to be fit using parts of the old coolant loop hose. 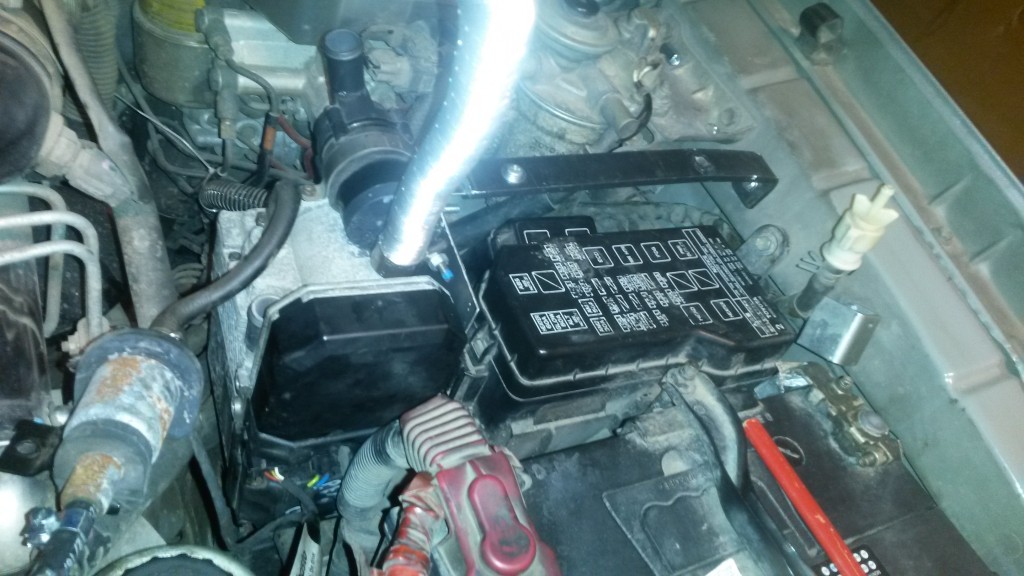 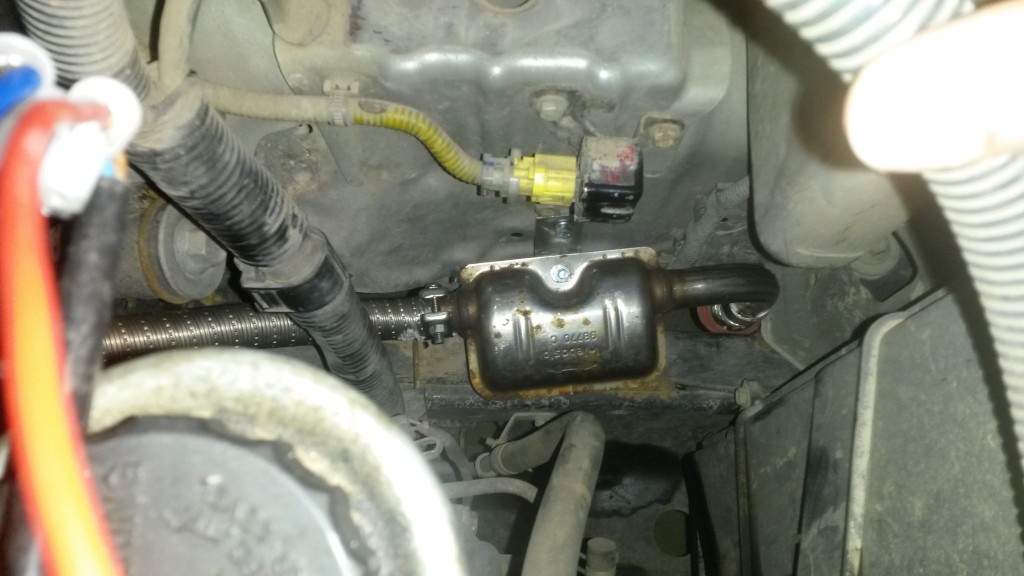 Fitting the exhaust, leading it to the wheelwell 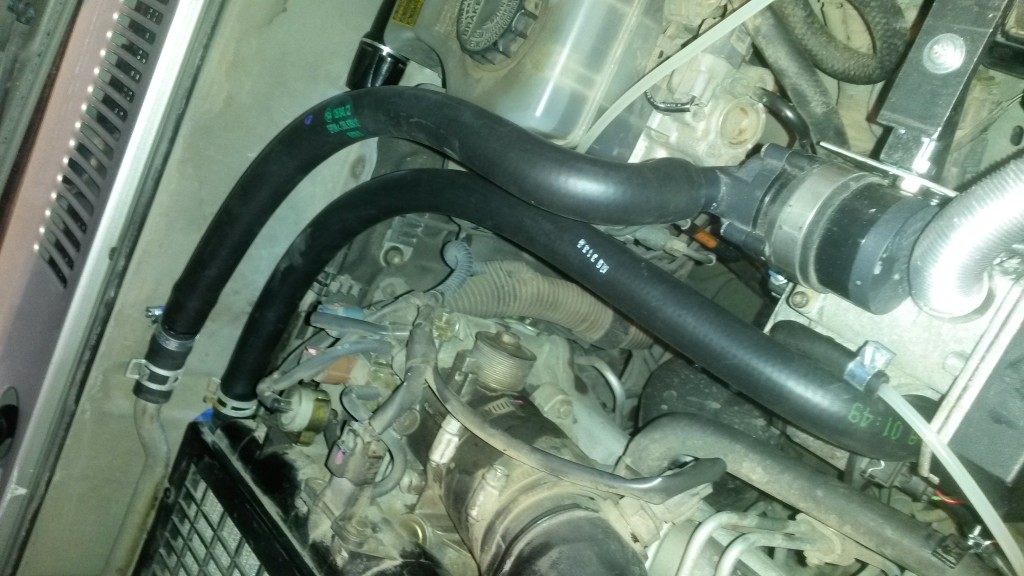 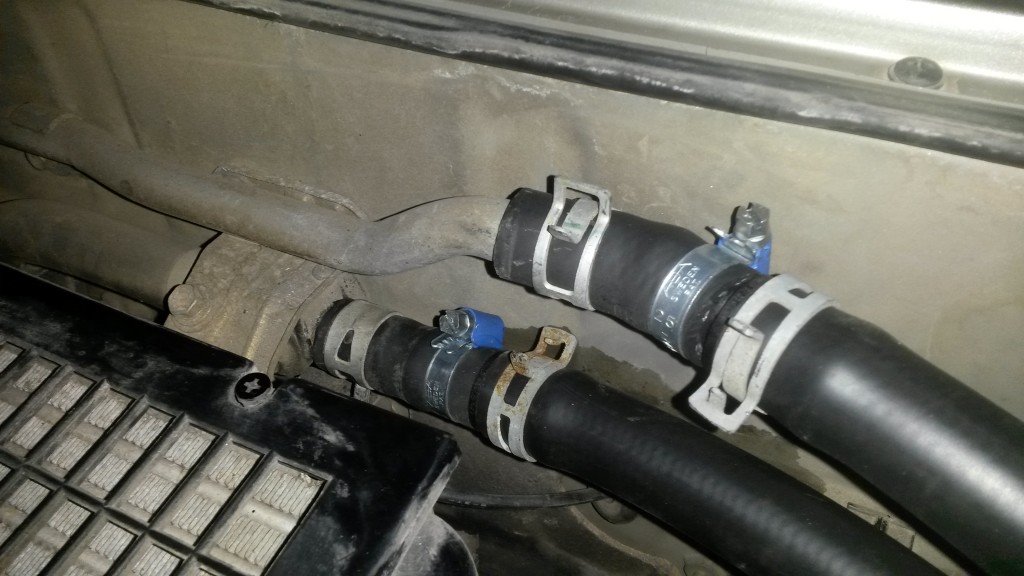 finally I needed to install the fuel pump and split the original fuel line that goes to the fuel filters. Brutus has 2 fuel filters. the first one is able to filter water and large particles. The original filter can do the rest. This was a bit scary because I heard that a diesel that sucks in air is hard to start up again. Once I installed the split and connected the fuel pump I started Brutus back up to test. It worked but the engine shut down after 20 seconds. It took about 30 seconds of starting to fire everything up again, but it has been running fine ever since. 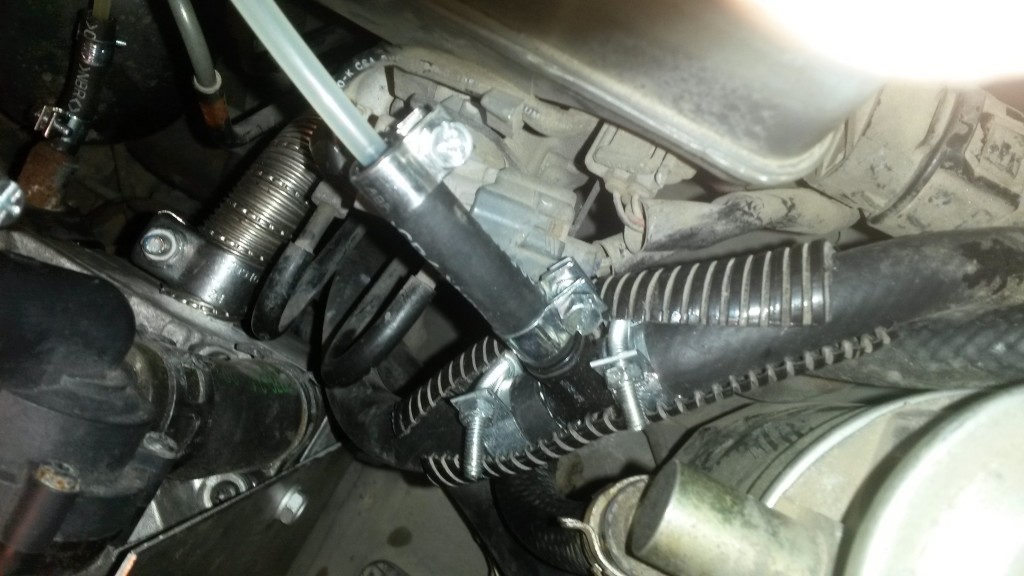 Now it was time to test the heater! I turned the starter key to active (the setting before starting) so that the air flow could be turned on. this also causes the coolant fluid blocker to open up. The heater should not be turned on if the contact is not set because there will be no coolant flowing. I flipped the heater switch and viola! The car heated up to a nice 20˚C in about 5 minutes. And to about 40˚C in about 10 minutes. Quite a potent heater 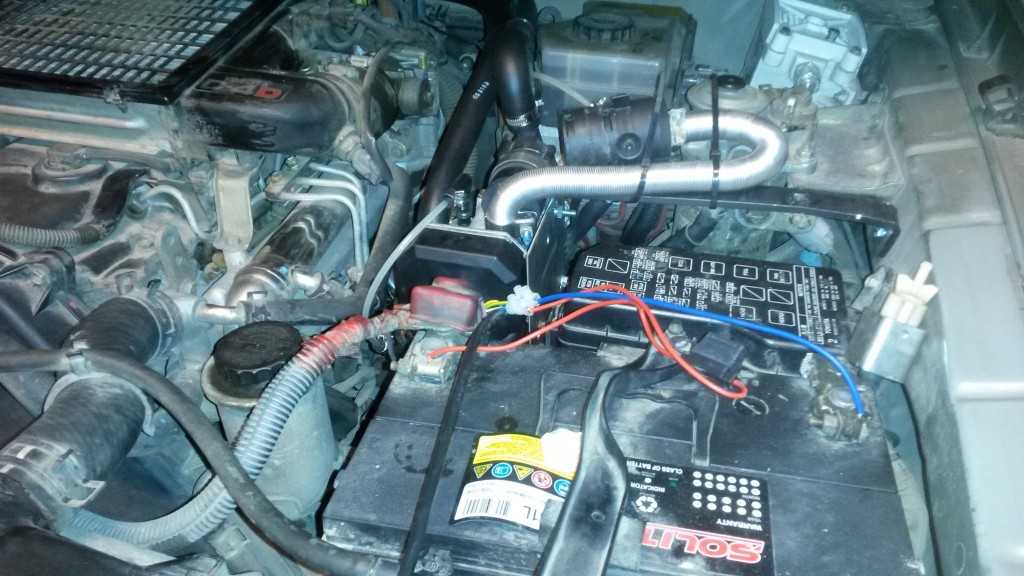 A few weeks later I also found the nozzle to lead the wire for the on-switch into the passenger compartment. It was located under the first fuel filter (top right in the image above), which was a little hard to temporarily remove. After some time I managed to remove it. To get the cable through the nozzle, I stuck in a screwdriver from inside, near the gas pedal, to the engine compartment. I taped the wire to the screwdriver and pulled it through the nozzle. Now I only need to make it waterproof by adding some kit.

I’m still working on the heater computer system. This is an arduino based system that can turn the heater on based on temperature sensors, remote control and a timer. I’ll post more on that later.

All in all I think I saved about €500 by getting a second hand heater, installing it myself and having a lot of fun doing so.