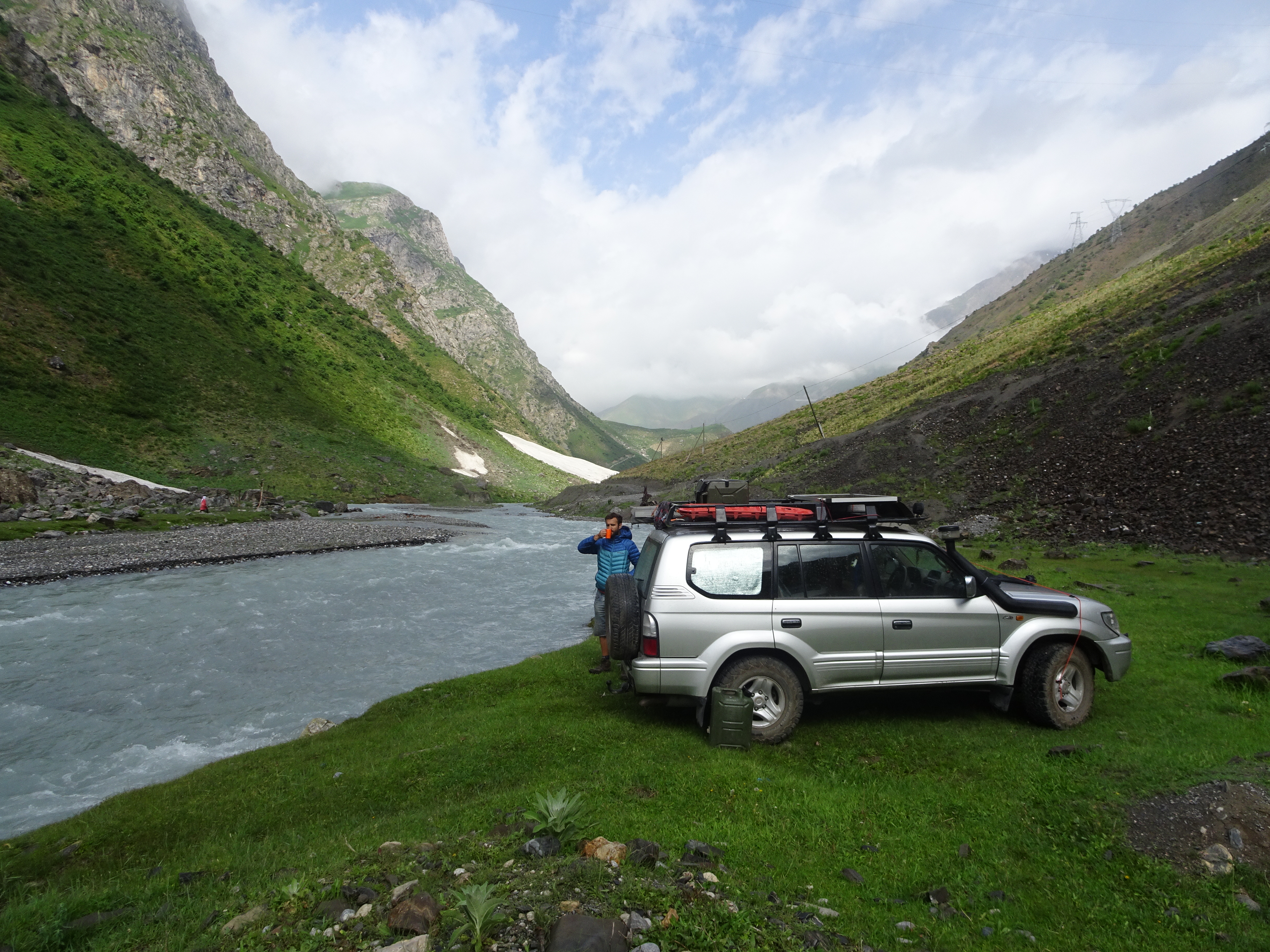 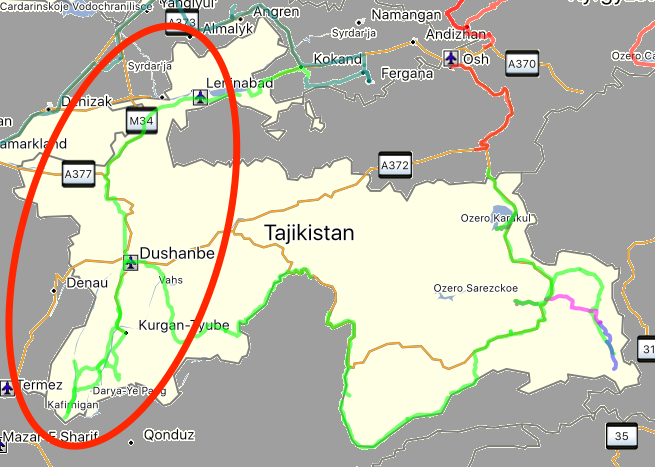 At the Uzbekistan – Tajikistan border on the Fergana valley side it was really quiet. We (Daniel and I) arrived and there was no one waiting. For the 5 hours we were there not a single person came through. On the Uzbek side we were inspected thoroughly. They checked all the registration slips and the most of the car had to be emptied. A German Shepard went through and around the car and all the stuff laying on the concrete. It’s not allowed to leave the country with more dollars than you came in with. Since I came with a torn 50 and had some money sent with Western Union I had a lot more. So I hid it on my person and hoped they wouldn’t frisk me. They didn’t, so rather relieved I left for the Tajik part of the border. There, we were helped by 2 nice soldiers who even spoke some English. We filled in the registration forms and got a bunch of forms and documents. After that one of the soldier suddenly started to speak in Russian to ask us for some extra money. No more English. Very strange. So we just declined without a problem and went to the next of three more stages. Car registration, and 2 more documents I don’t remember the function of. And they would costs about 35 dollars in total. At first I thought they were trying to get more money off us but after refusing for a while they threatened to keep our passports and finally showed us official documentation with the prices. The problem was that we only had fifty and hundred dollar notes and they had no change at all. So after some debate one of the border personnel got in the car with me and we drove to the first village over the border to get some money from a bank. But when we got there all banks were closed. We tried to change my dollar notes in shops and people on the street and finally someone was willing to give us Somony for Dollars. With a pocket full of Som we went back to the border where I was able to pay the different departments for their documents. The only problem was that the internet was down. The guy tried for 2 hours to fill in the forms but nothing happened. Only when he got the old fashioned forms out and filled them in, the internet suddenly started working. Finally the form could be filled in and printed and after a good 2.5 hours we were able to leave into Tajikistan!

It was quite late but we still had a couple of hours of daylight to find a proper camping spot. We found one near the Kairakum reservoir in the north. A quiet spot behind the dyke, in an almost Dutch scenery. Good company, a few beers and bugless starry sky made an excellent evening after the whole border ordeal. 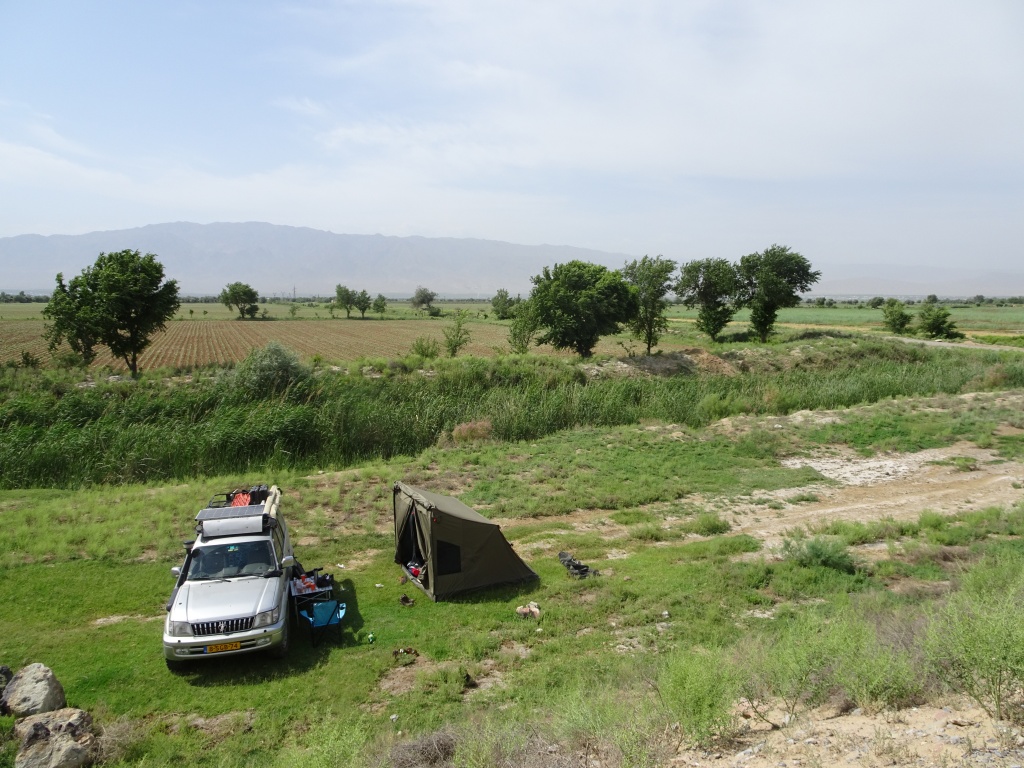 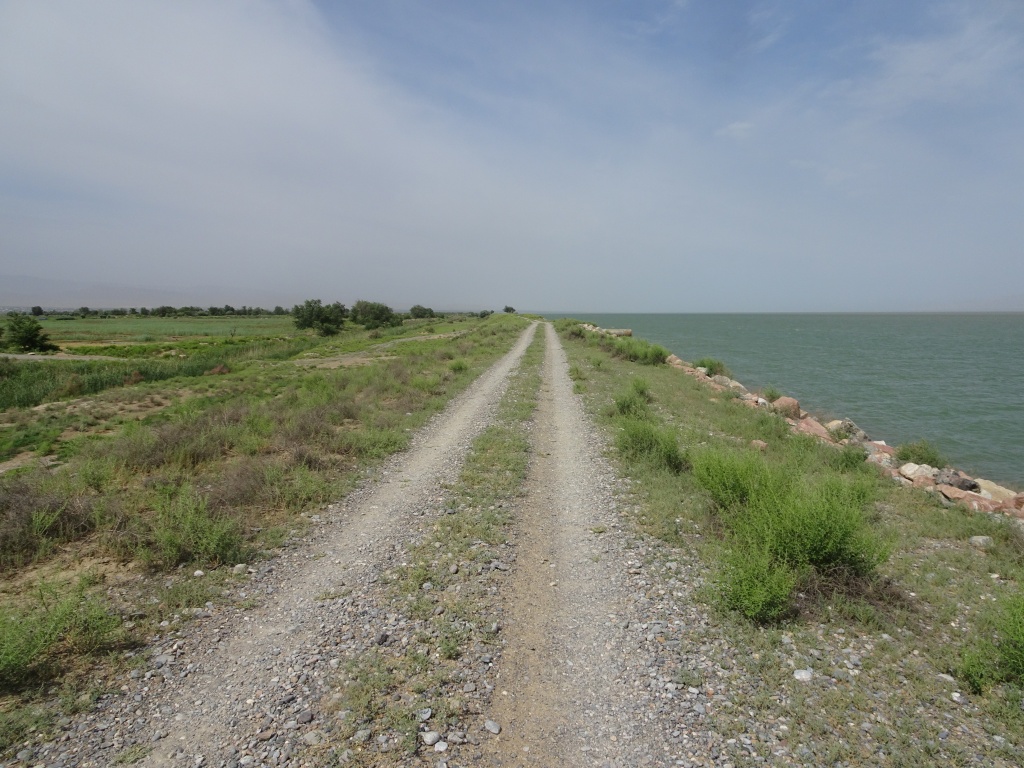 After breakfast we went for a swim in the reservoir after which we headed in the direction of Dushanbe. It was still quite a drive to get there. On the way there were beautiful sceneries while we slowly headed into mountainous terrain. On the side of the road in a barren gorge there was a small sign that said Pete. Pete was a small town in an oasis of trees and I decided to drive left again. When I parked, Daniel woke up and we decided to go for a small walk. We met some people on the way who gave us a friendly hello. When we were at the end of the town we walked back to the car, where a committee of people seemed to be waiting for us. We said hello and were invited for tea, in what appeared to be the mayor’s office. A guy in a military uniform joined us and other people brought in bread, cheesy stuff and condensed milk for us to try. We had a few laughs and they managed to tell us that we were the first tourists in Pete (at least for a long time). We decided to drive some more that day and said goodbye to the people of Pete. After a short ride dusk set in and we found a nice place near the road side river. We were at 2500(?) meter so the temperature was rather chilly. We noticed that there were people on the other side of the river, and the next day a man and a kid came over to give us breakfast and to say hello. They also invited us to come check their place so we wen back over the river with them, on a shabby cable cart thingy. We sat with them in their tent while they fed us bread, butter, kefir and tea. I didn’t want to intrude to much by taking pictures but got a selfie out of it. After that we said goodbye and packed up camp to drive to Dushanbe that day. Quite early in the afternoon we arrived at Hello Dushanbe hostel and went for a beer and a walk through town soon after. Dushanbe has a rather oversized park with fountains and waterfalls and the largest flagpole in the world. Nice stuff to keep you busy for a while. 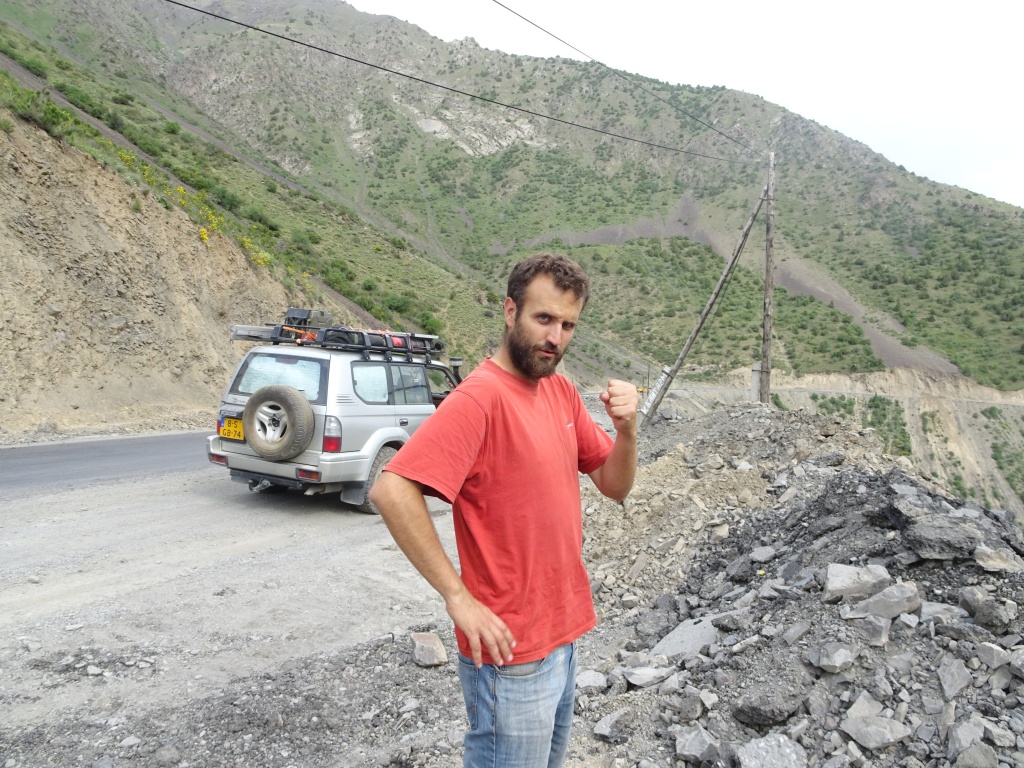 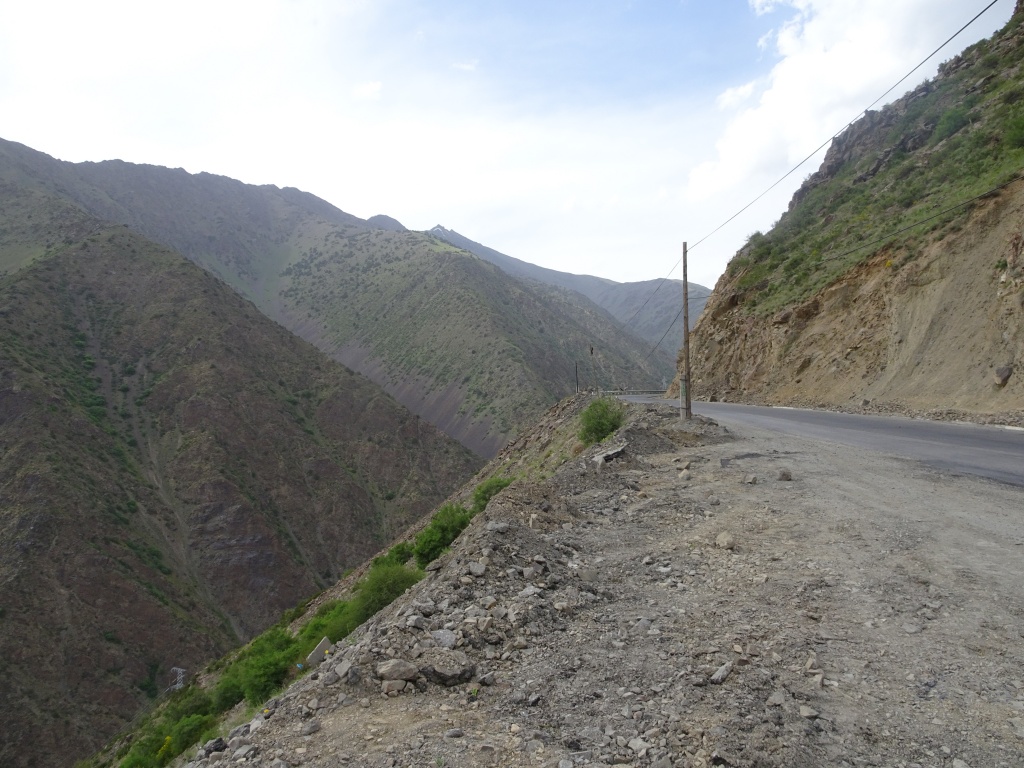 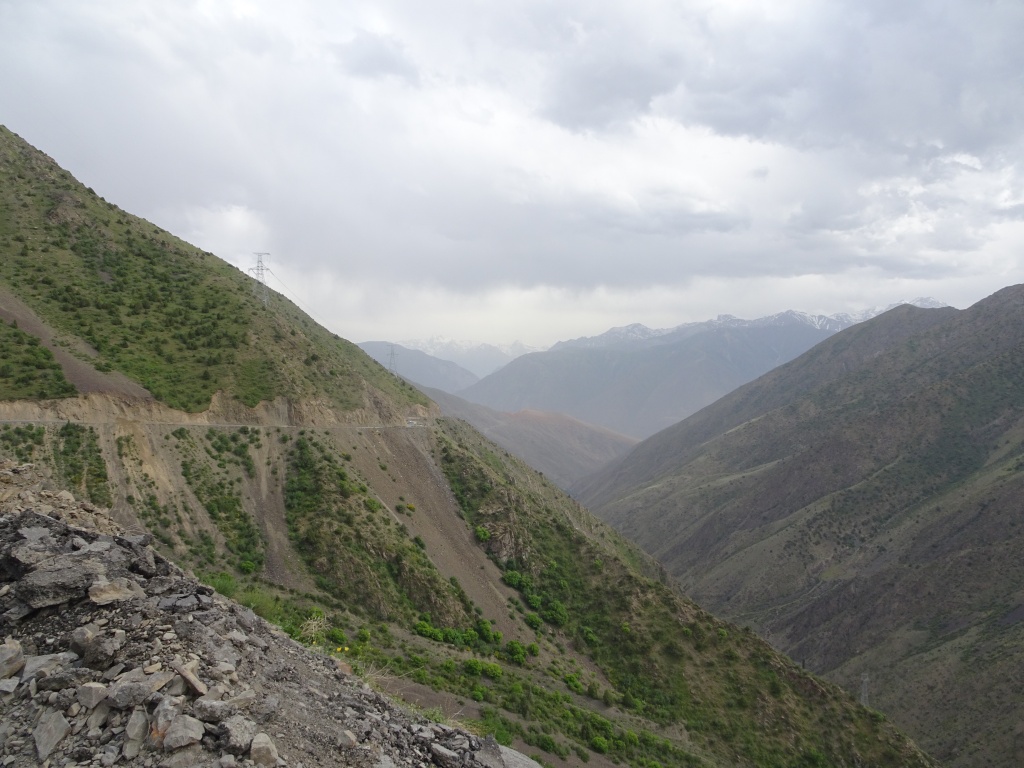 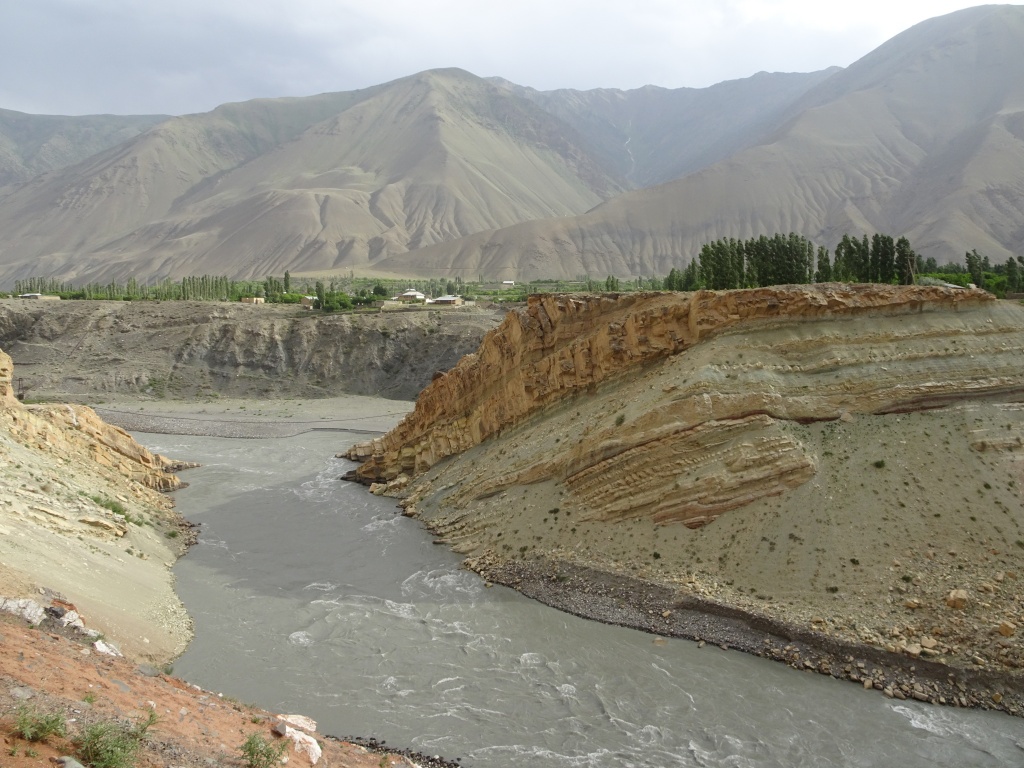 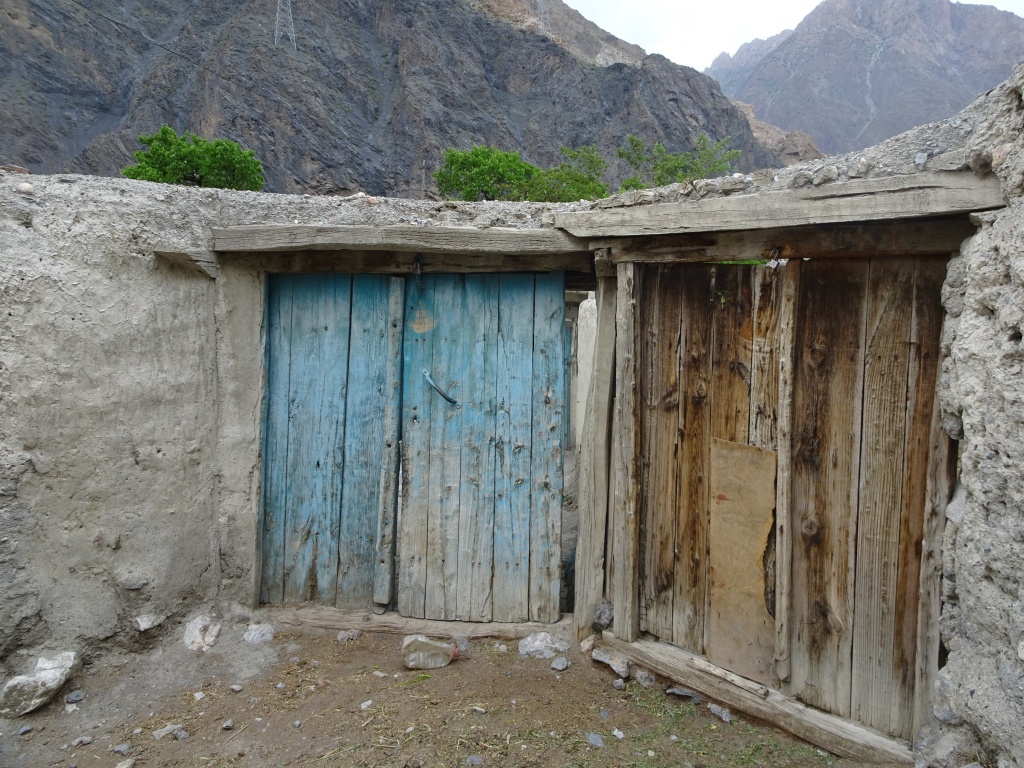 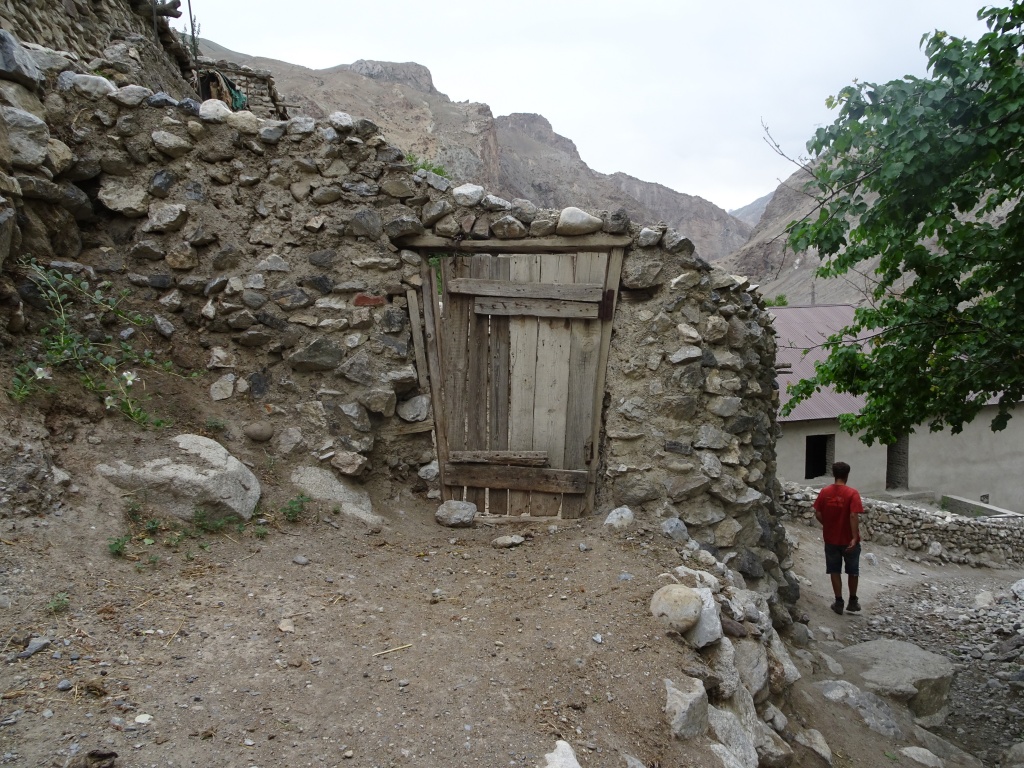 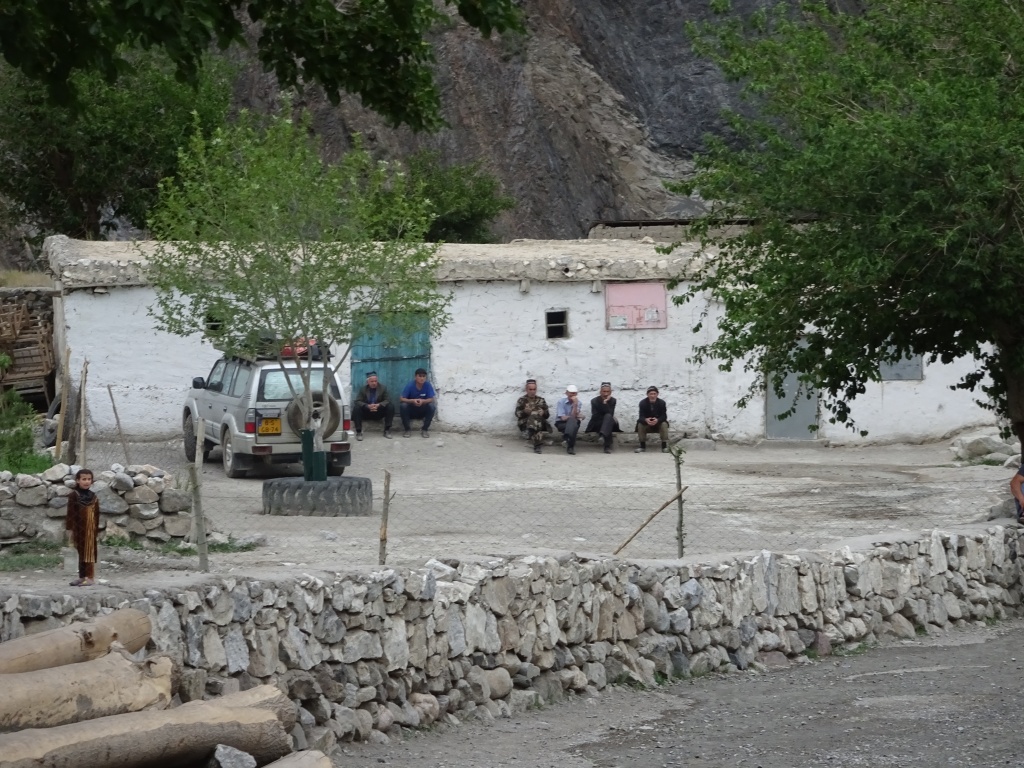 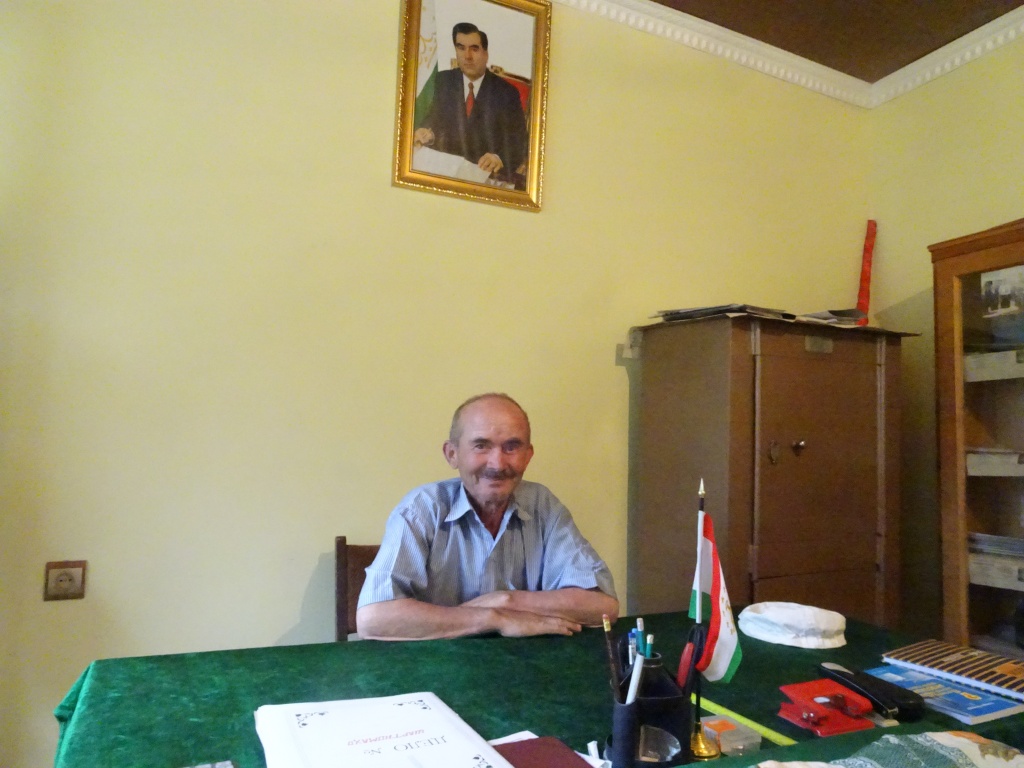 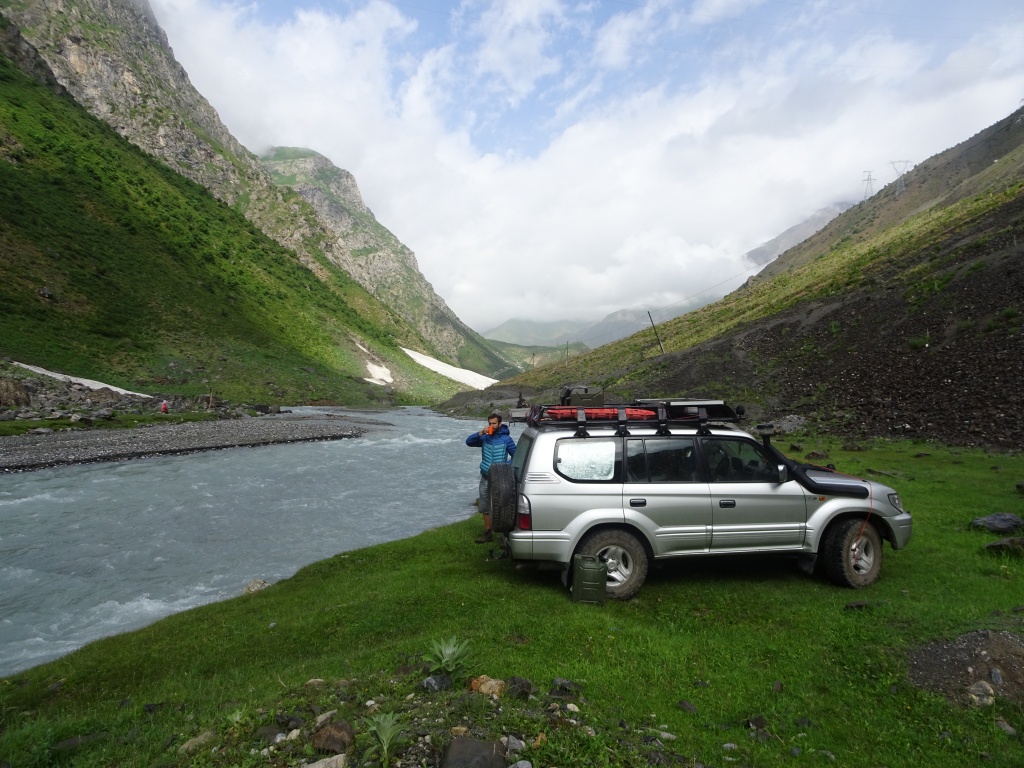 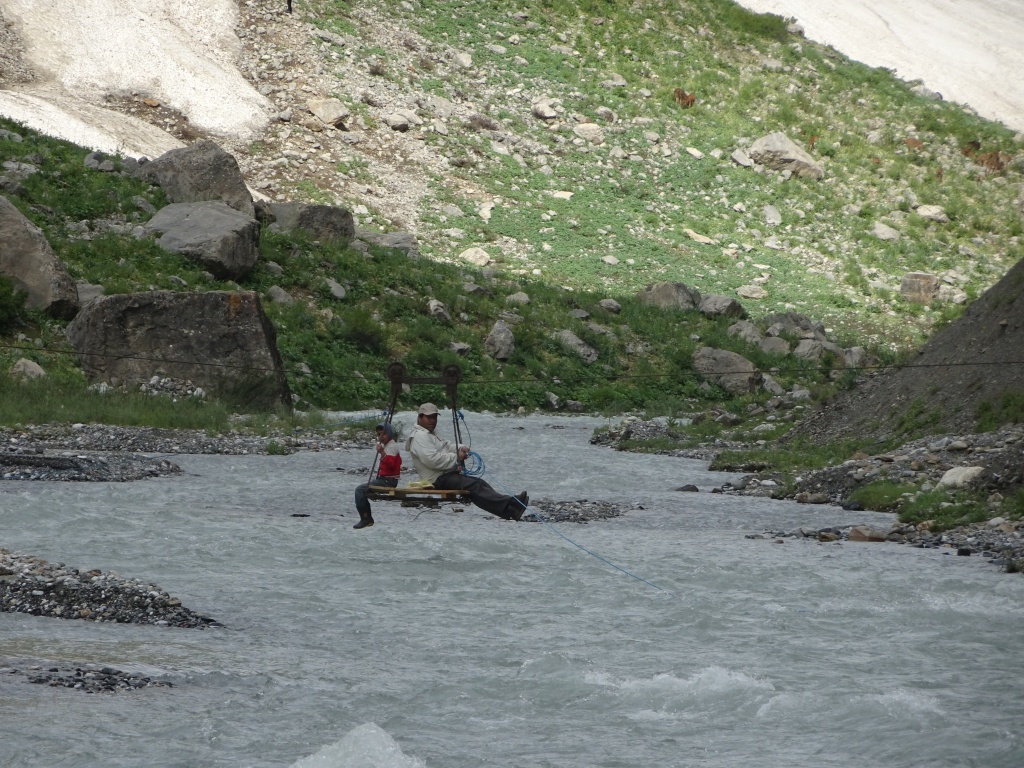 Our neighbors coming over with gifts 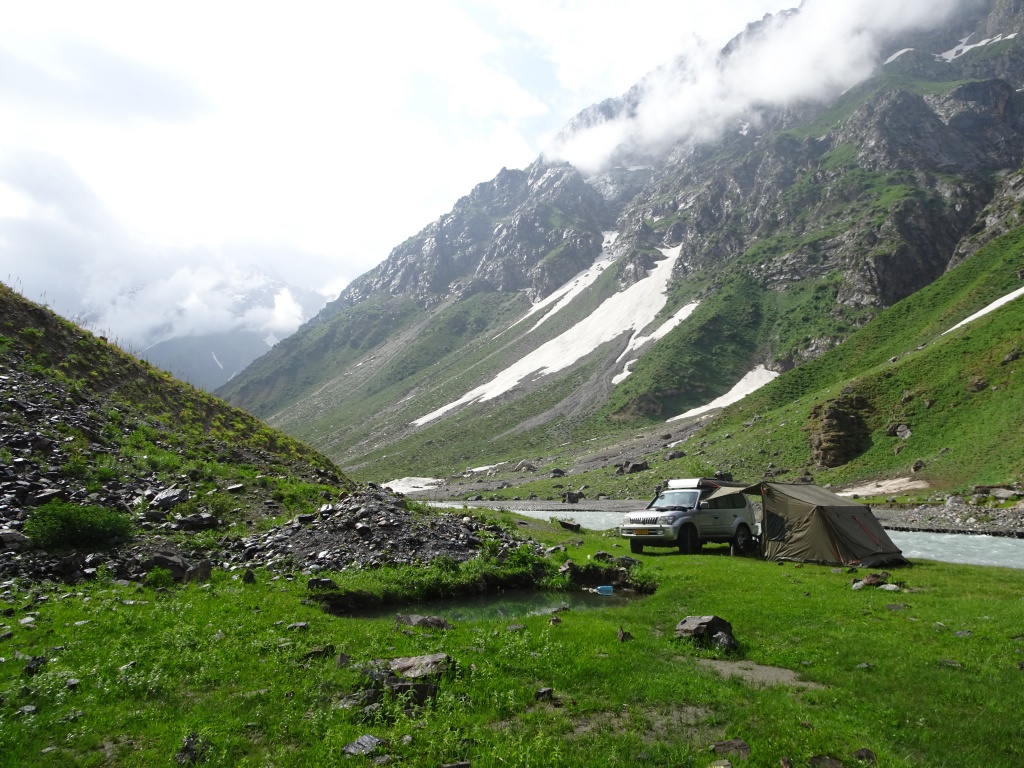 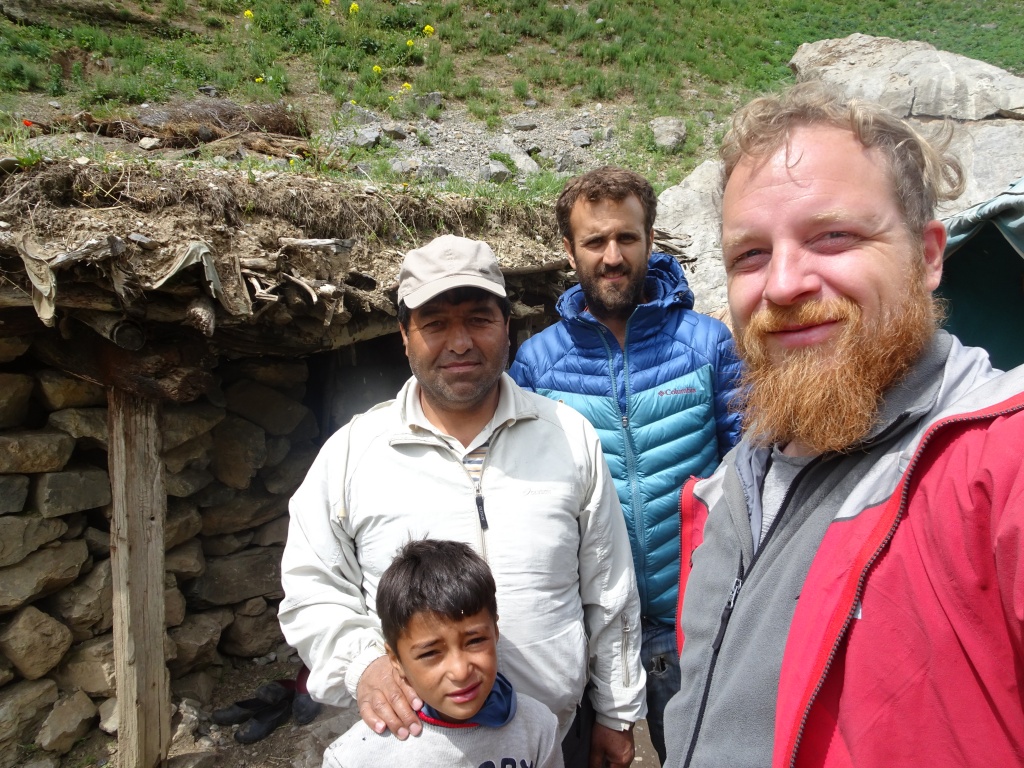 The next day it was time to visit the bazar not very far from the hostel. Daniel, Ed, a dutch girl and I, after which of course we went for a couple of beers. I stayed in Dushanbe for a few more days, writing blog and relaxing. Ed decided to join Daniel and my for some time in the Pamirs so we made a test trip to the south-west of Tajikistan, a place where not a lot of tourists go. At least, we didn’t see any in our 3 days there. Also we found it paramount to visit the towns Communizm, Engels and Bolsjewiek. Also we wanted to see if the town Dusti was really dusty. It was. 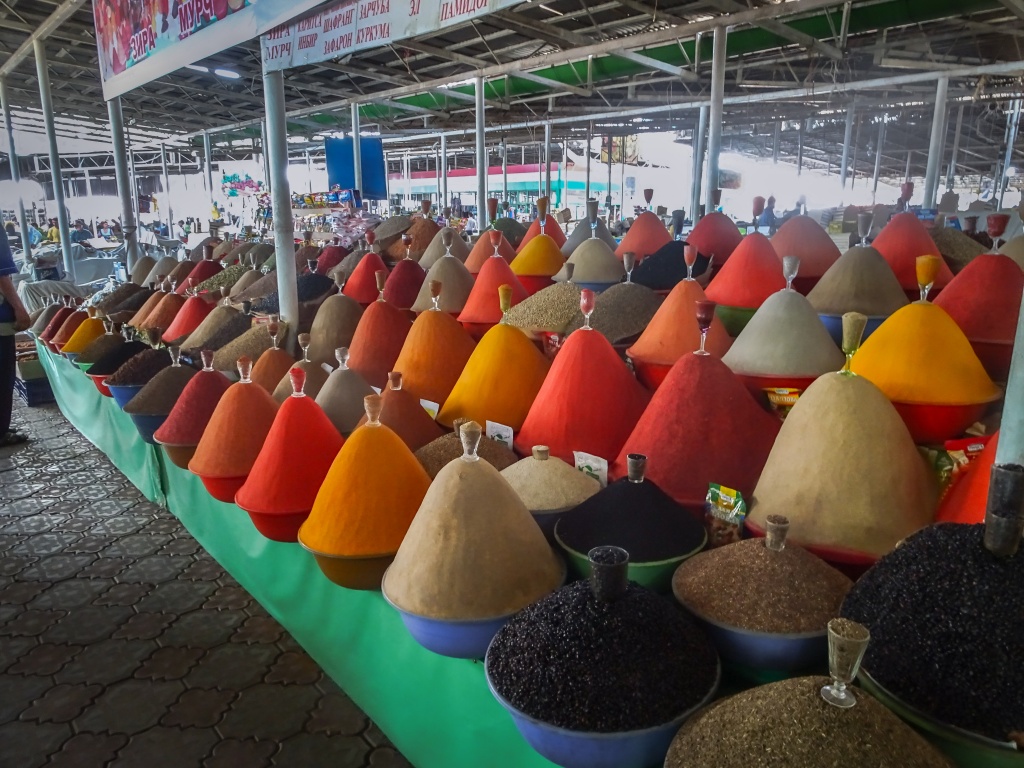 Spices at the bazar 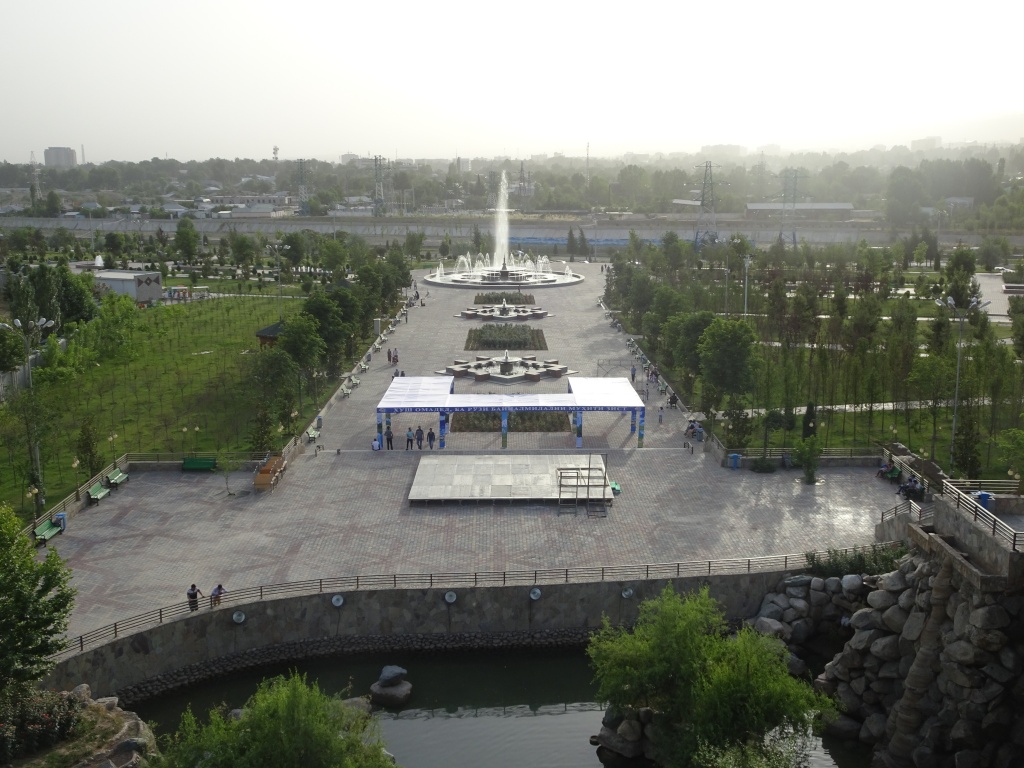 Some stuff in Dushanbe 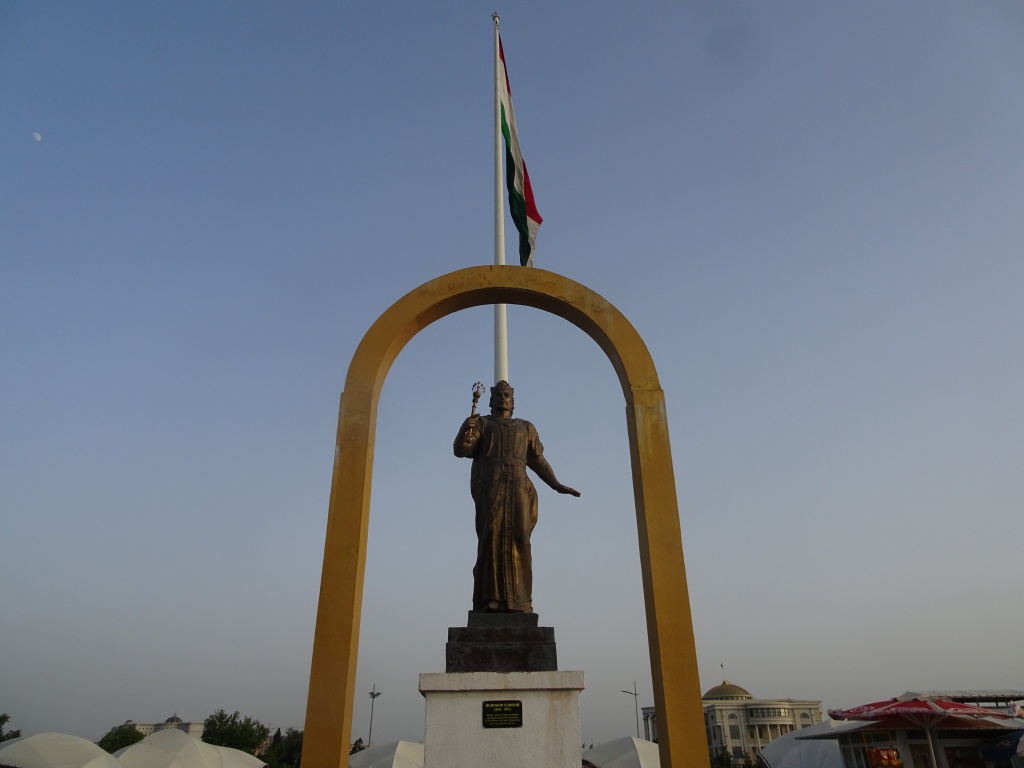 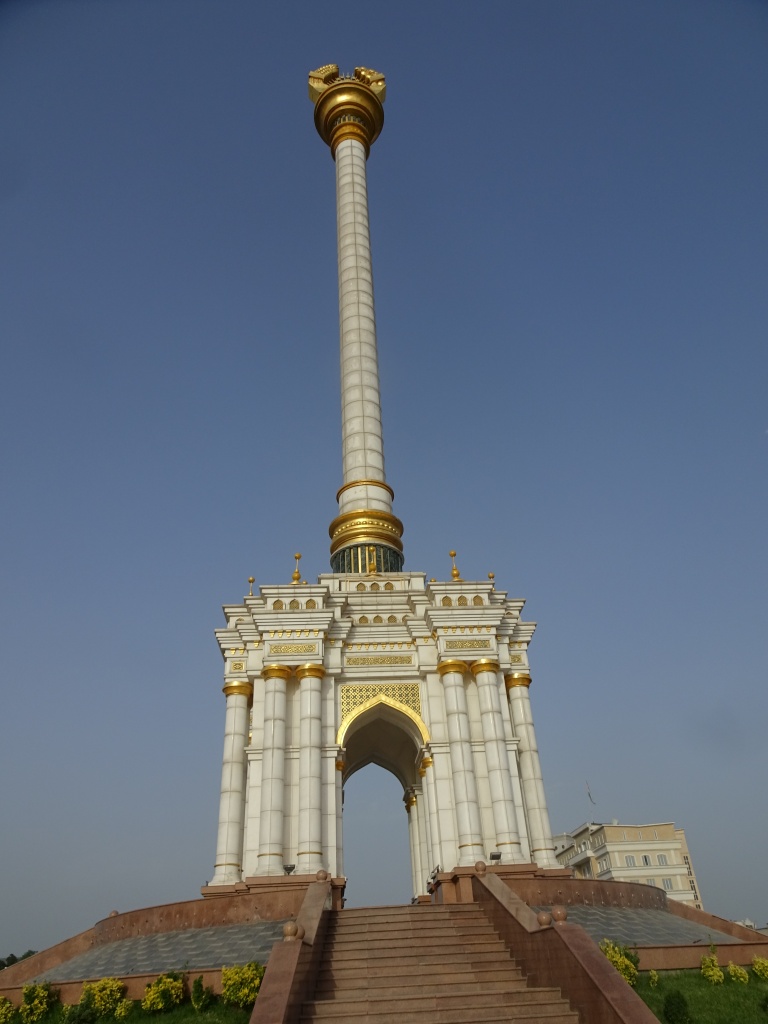 The first day we drove to a secluded camping spot behind a village. The second day I got rather sick in the car and we had to stop because of that. We wound up in a rather hot and dusty place near a stream. A terrible place to be puking and shitting in misery. But, after some hours I found the power to try to look for a more decent spot to camp. We found one about 20 minutes later in a nice meadow. That evening I already felt a lot better so we could continue our trip the day after. Communizm, Engels and Bolsjewiek were absolutely not interesting and didn’t even have name signs. So, a little disappointed we drove to the border of Afghanistan to ask if we could cross it to camp near the river. The border guard looked at us like if we were joking, which I guess we were. A little. But not entirely of course. I guess it was worth trying? We made a plan to cross some mountain range to a national park. On Maps.me there was a path leading to the east through the mountains. It turned out to be quite off-roady before ending up on a flat area with sandy roads leading in several directions. One of them led to the edge of the reserve where we found a sort of farm house with bunch of puppies, an old car and a kid that seemed to be guarding the place. The kid stopped us and wouldn’t really let us through. He called his boss and after some explaining he made it clear that we had to wait for the guy to arrive. And after a 45 minute wait we saw a huge dust cloud and a very cranky guy appeared in an old Opel station car. You’re not supposed to be there and where is your permit and what do you mean you just want to camp here? Still unclear about what these people were actually doing here and why they were not happy about us being there, we started fantasizing about them being opium producers or smugglers. The guy told us to follow him and he drove off like a maniac. We did but couldn’t quite keep up without destroying something but after some time we ended up in the same place as he did. There was a small cabin there with some guys. One of them was happy to meet us and the other guy lightened up a bit too. We were told to wait while HIS boss would drive our way. One hour they told us. We moved into the house where we drank tea and tried to communicate. As it turned out they were guarding the nature reserve so our fantasies of running into smugglers and drug dealers were a bit over the top :). About 1.5 hours later the chief arrived, looked at our passports and told us 30 seconds later that we were not allowed to stay or camp in the reserve, which we were already pretty sure of anyway. I’m not sure why he had to come all the way there for. We were told to follow him out of the reserve. Again, they drove like utter maniacs and I didn’t want to stay in their dust clouds, so 15 minutes later we lost them and went looking for a camping spot, having checked that we cleared the nature reserve. That night we slept really well at our peaceful site near the river. We woke up well rested and it was time to head back to Dushanbe to prepare for the Pamir highway. I think the test was successful. 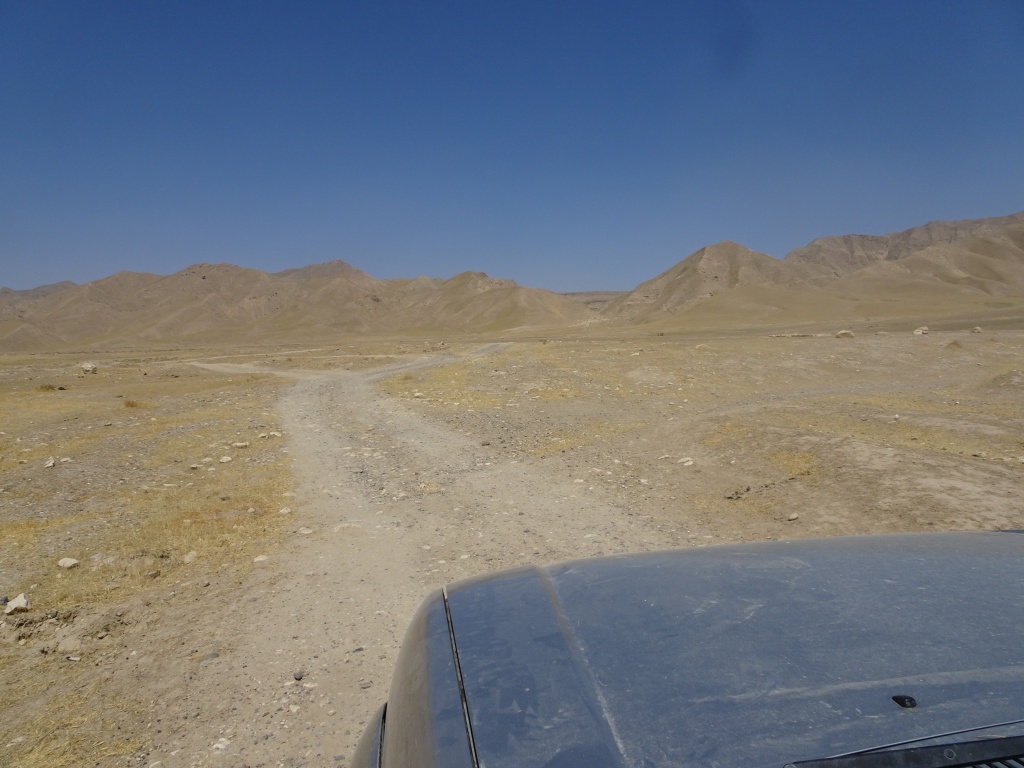 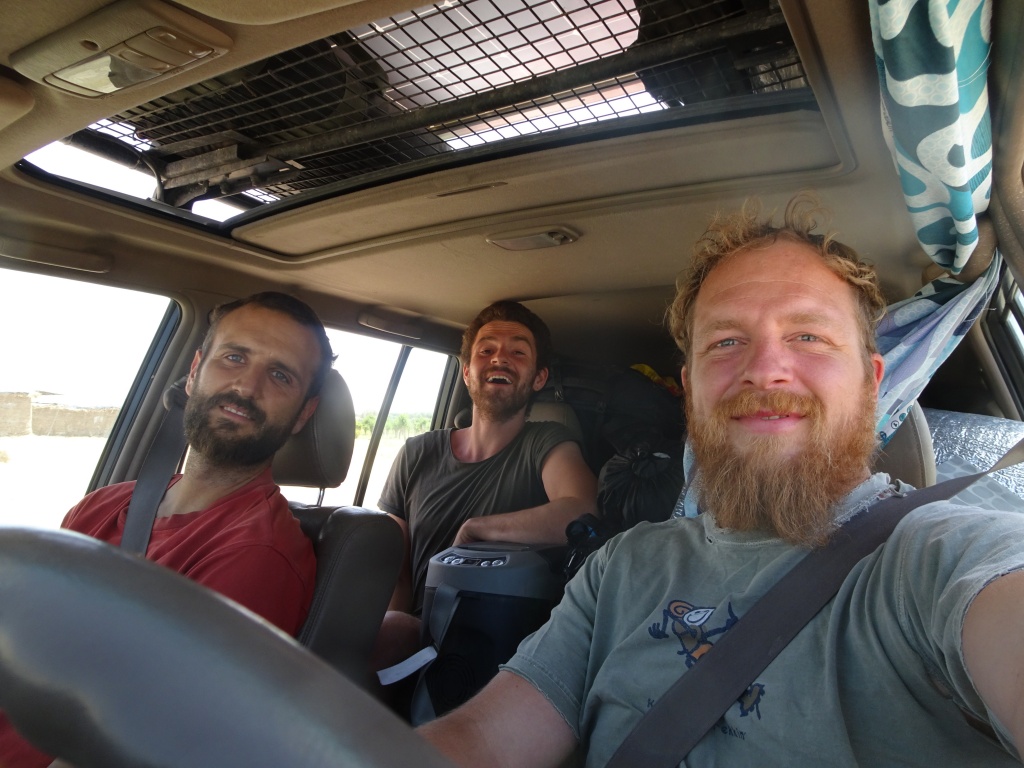 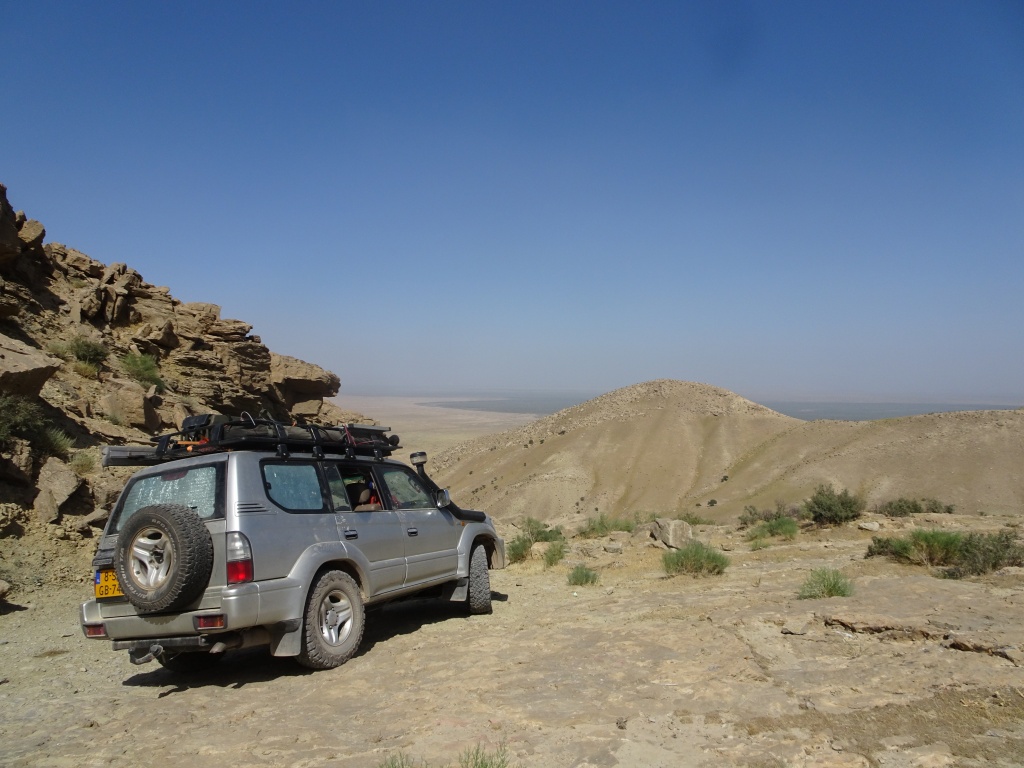 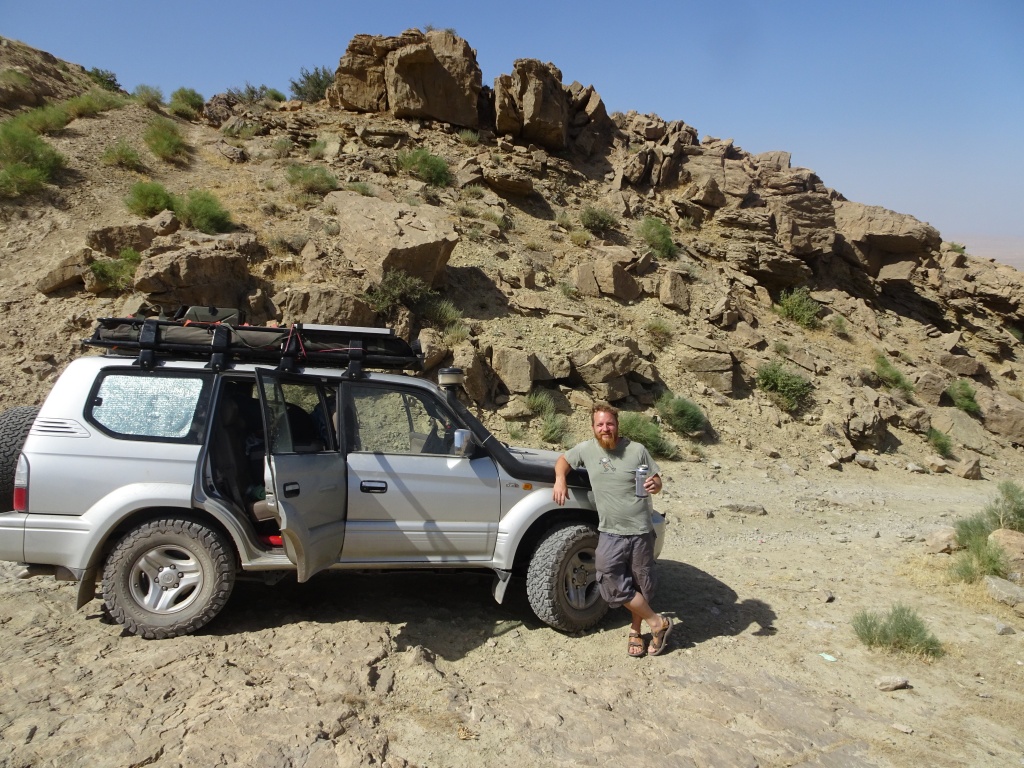 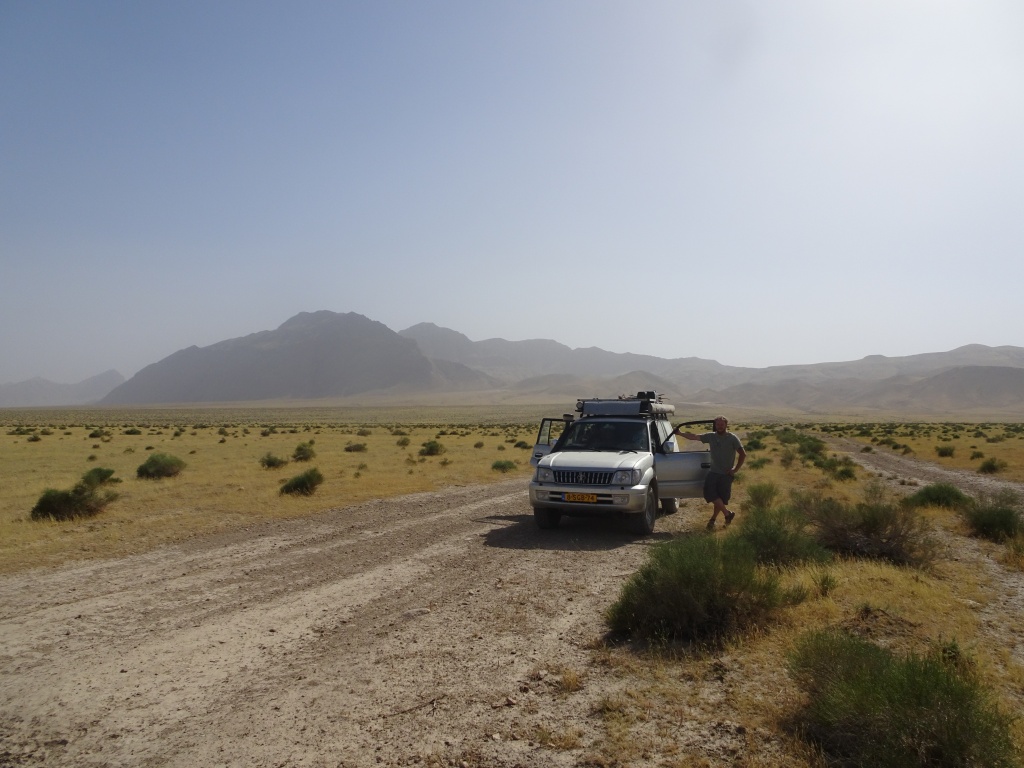 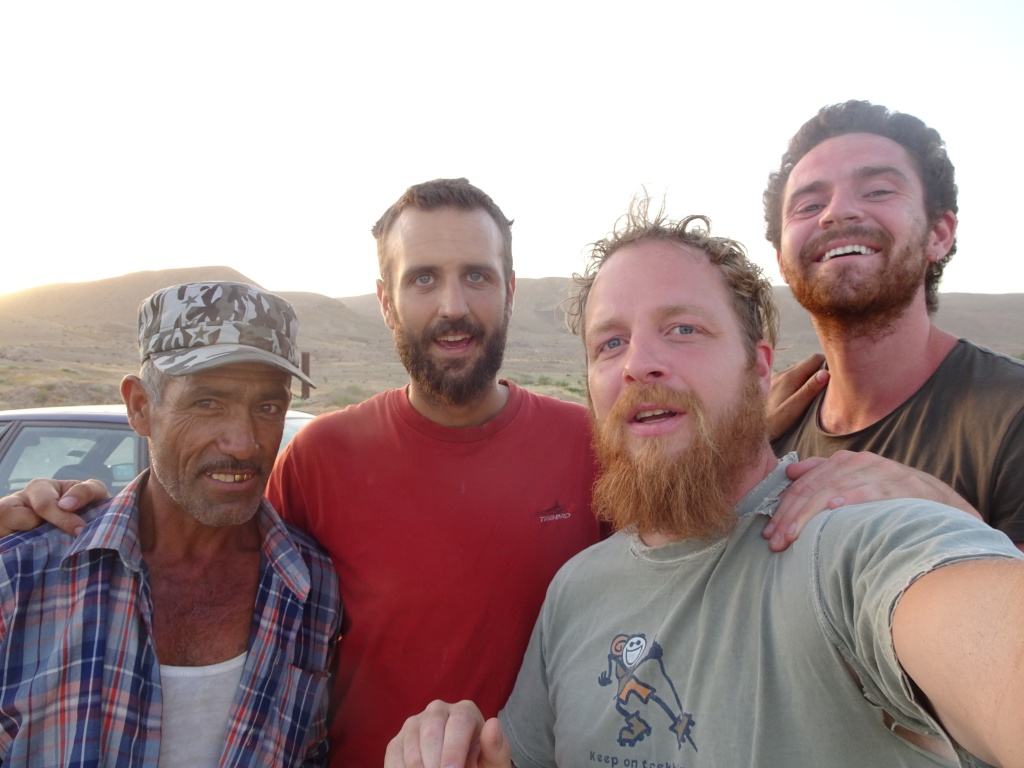 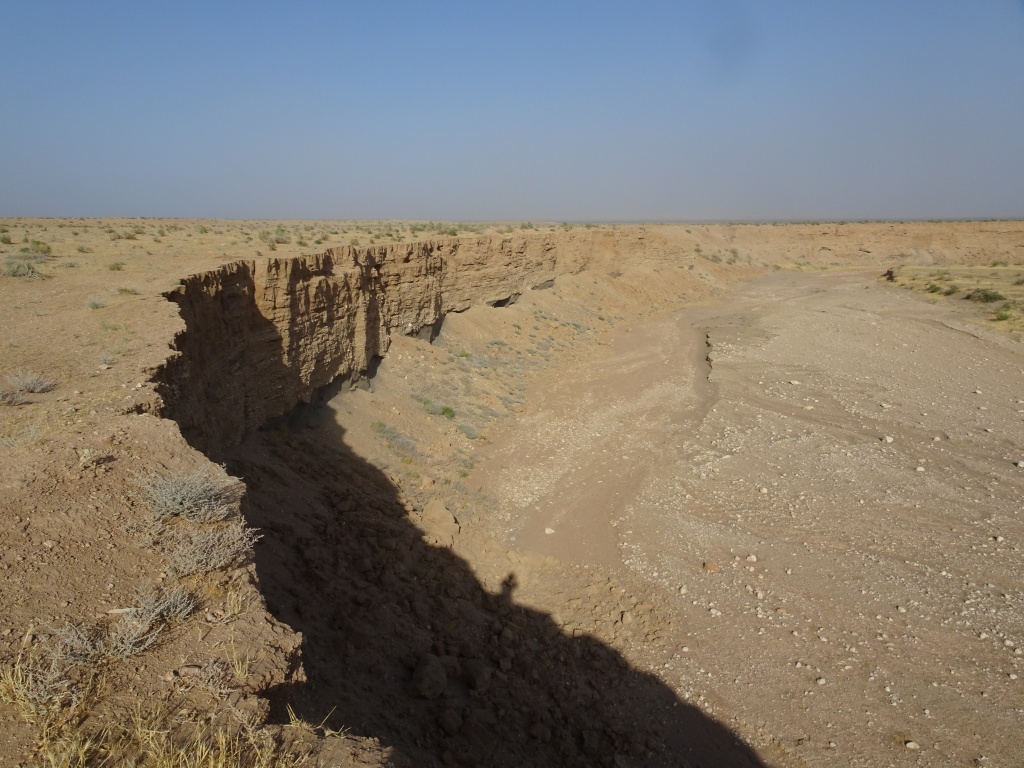 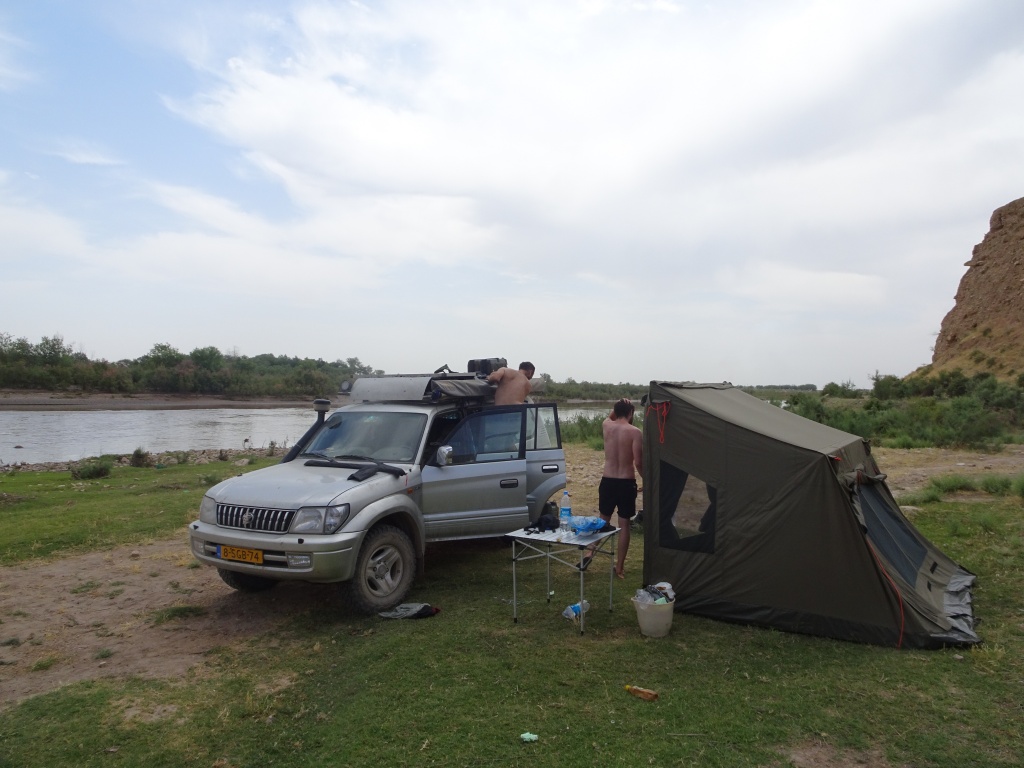 We spent two days in Green House hostel because we heard that it has a bit better atmosphere for overlanders, which was true. We met a bunch of motorcyclists there who were either going to the Pamirs, or to Uzbekistan.

Before leaving to the Parmir region we did some proper groceries and filled up the car completely with water, noodles, chocolate, vodka, pasta rice and so on. On to the next post!