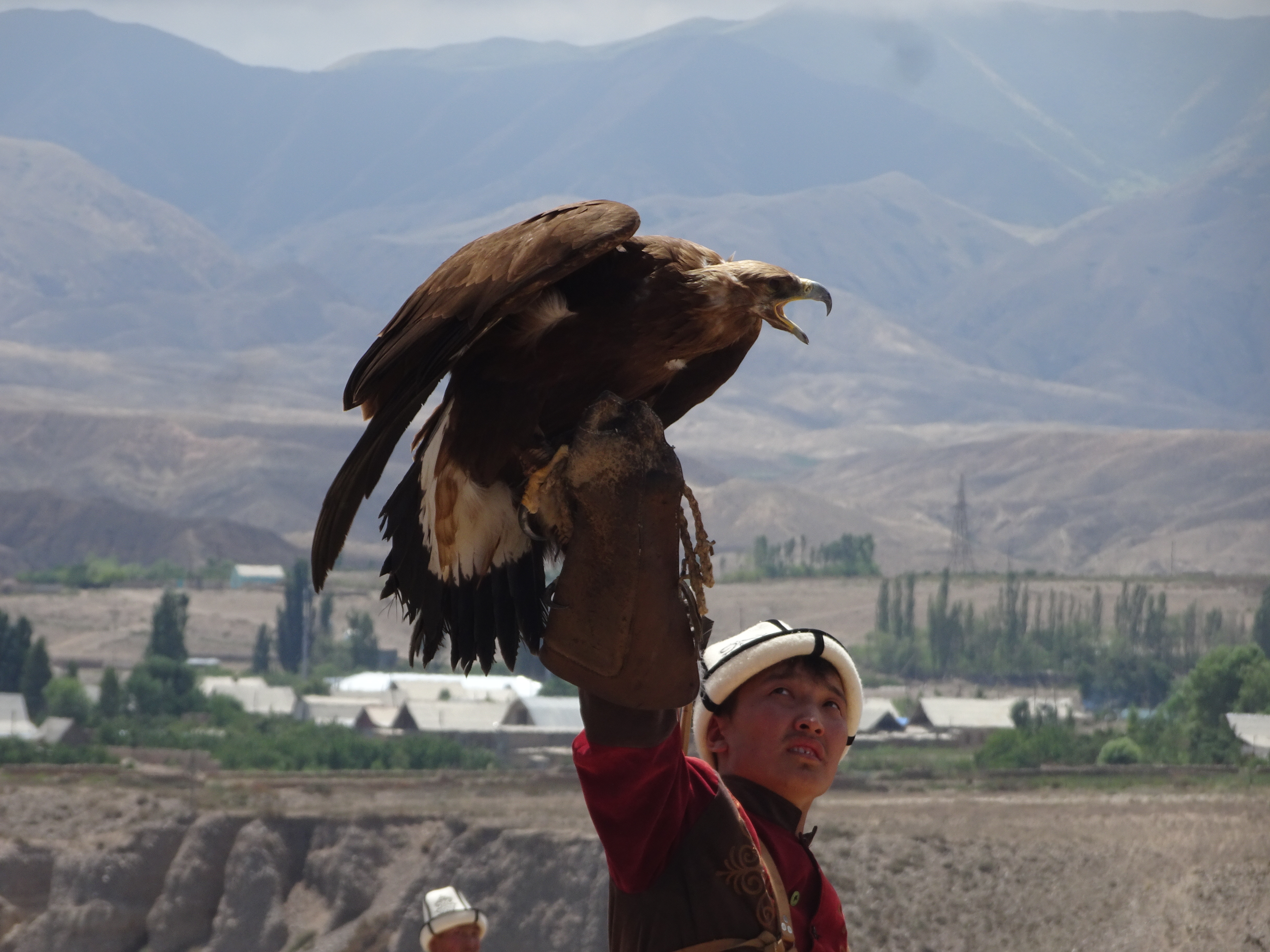 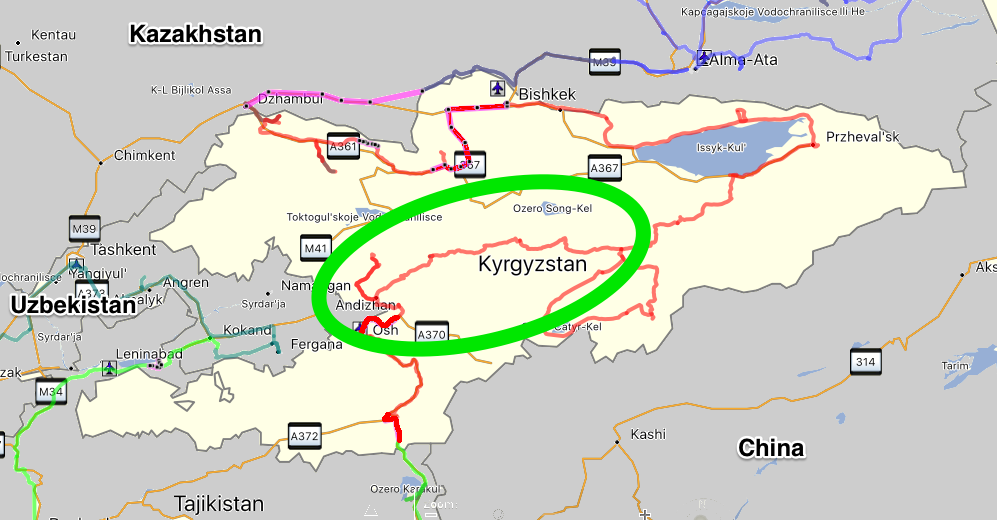 After I picked up Ilse from the airport, we drove back to the hostel to drink some tea and talk. We decided to drive off the same day, towards Arslanbob. We tried to find a spot to camp near Uzgen but we only found a lake with a load of rubbish and tons of people fishing. Also tons of insects. So we drove on until we found a nice spot on a hill near Shoro Bashat. We set up camp (except for the watermelon falling on Ilse’s head) quite efficiently!, had a beer, caught up on a bunch of things and played an oldskool card game. There was another one of those horror spiders that decided he didn’t want to leave. When I tried to chase it away it went straight into defense mode and I had to kill it with my sandal :(. 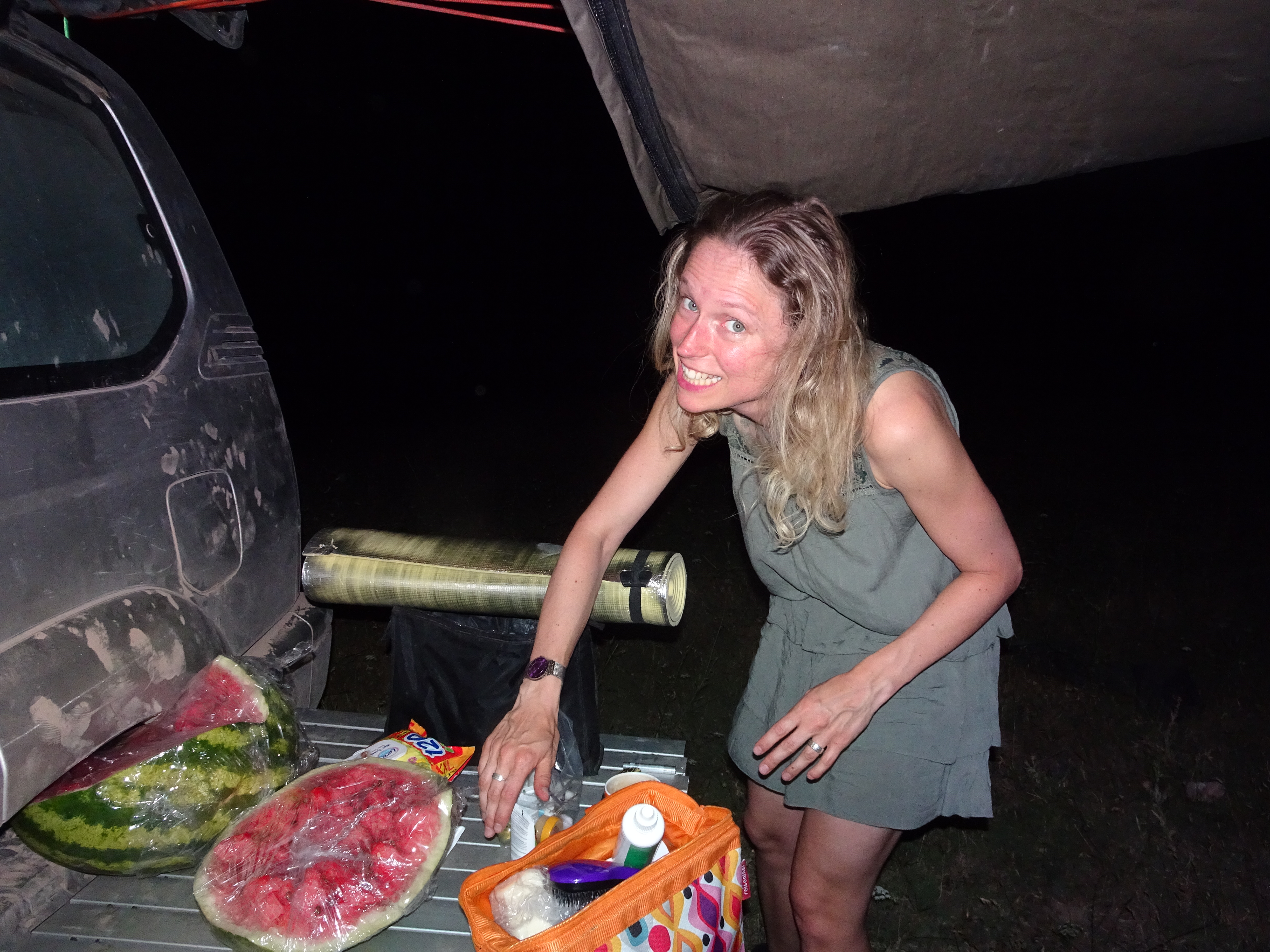 After the melon fell on the head 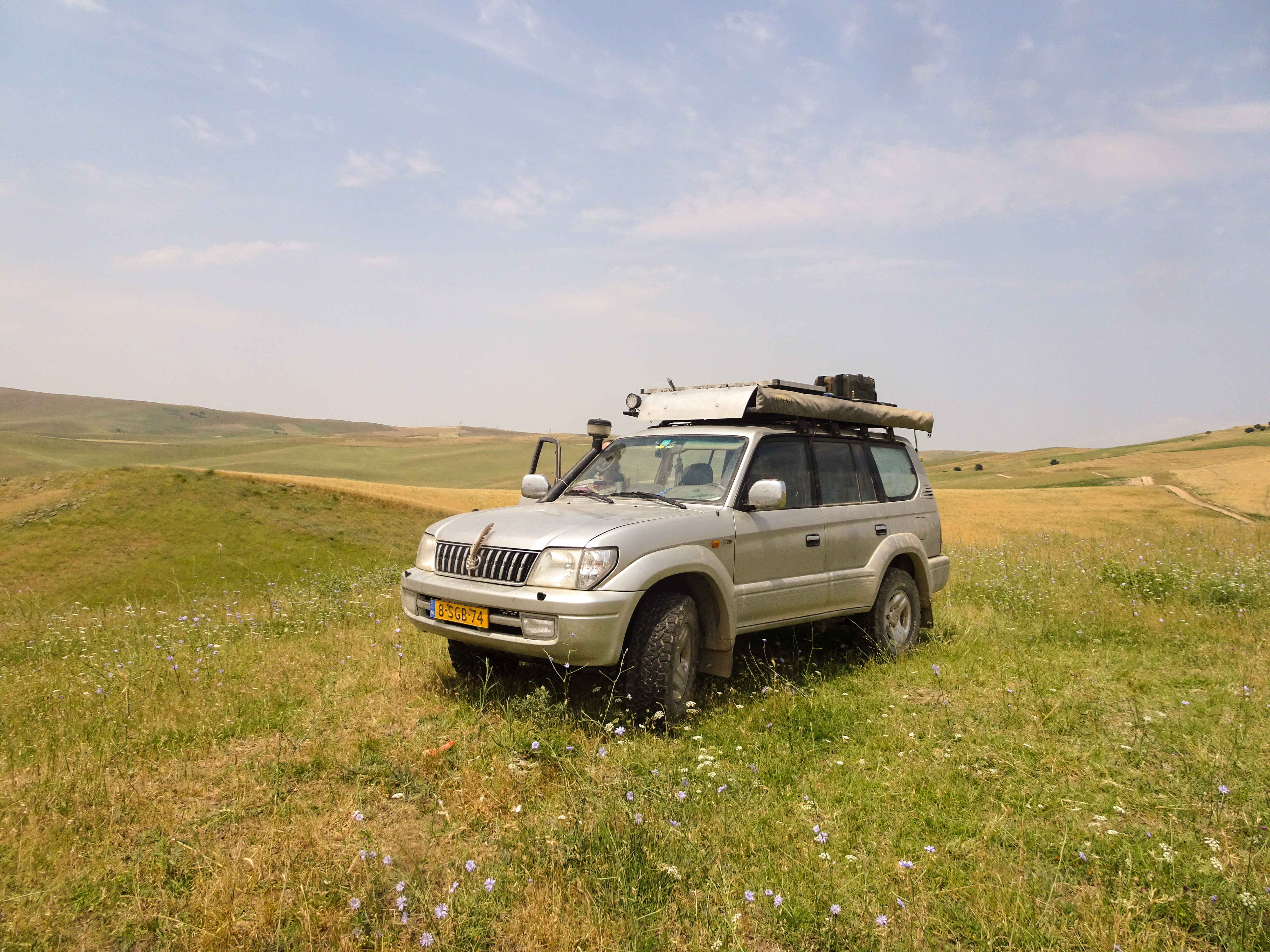 After we cleaned up the camp

After waking up, we said hi to a local who passed by on his horse, made breakfast, relaxedly cleaned up camp and went back on the road. The road to Arslanbob was ok, and driving there was chill. In Arslanbob however, the road became largely non-existant. First we visited the 100 meter high waterfall. On the way back to the car we cleaned up the path a bit because it was very littered. I hope it helped It was already getting a bit dusky when we started looking for a good spot to camp. There were a few options but they were not to our satisfaction, so finally after an hour of searching we found a nice spot next to the path to the waterfall. My stove broke down when we wanted to make a dinner. The pump sort of disintegrated. But I brought a spare stove! Before, I thought that was ridiculous, but it turned out to be a good plan. We stayed there for 2 nights, mainly because of the crappy weather. There was rain, some wind and a violent hail storm. Luckily also some sun in between showers. The whole time there were little UAZ 4×4’s passing by with a ton of people that wanted to see the waterfall, waving to us happily. When we cleaned up camp, the sun had been shining for a while so everything was dry. We drove off towards the east, passing the ridiculously popular fair ground in Arslanbob. 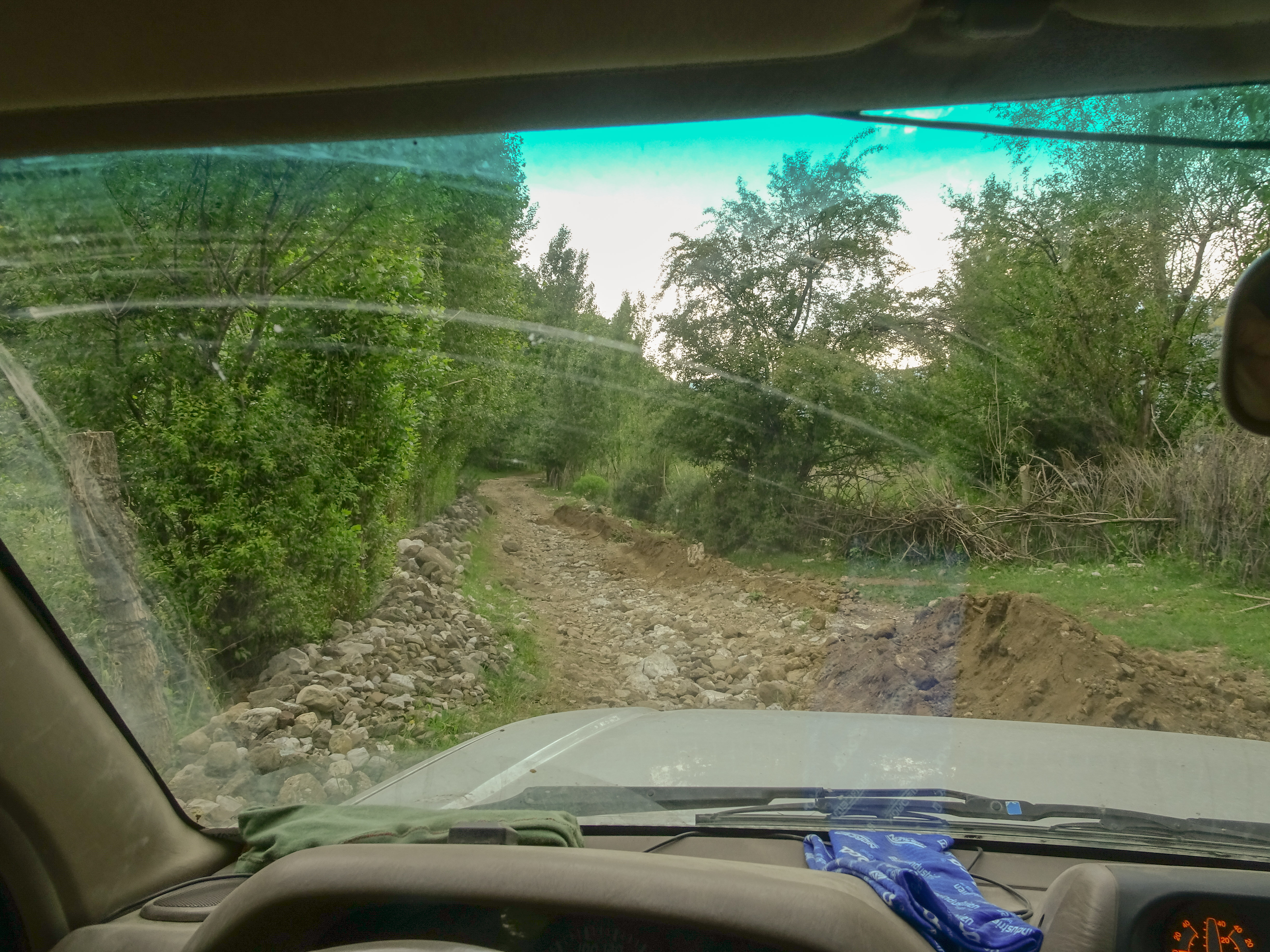 Driving up the hill, finding no place to camp 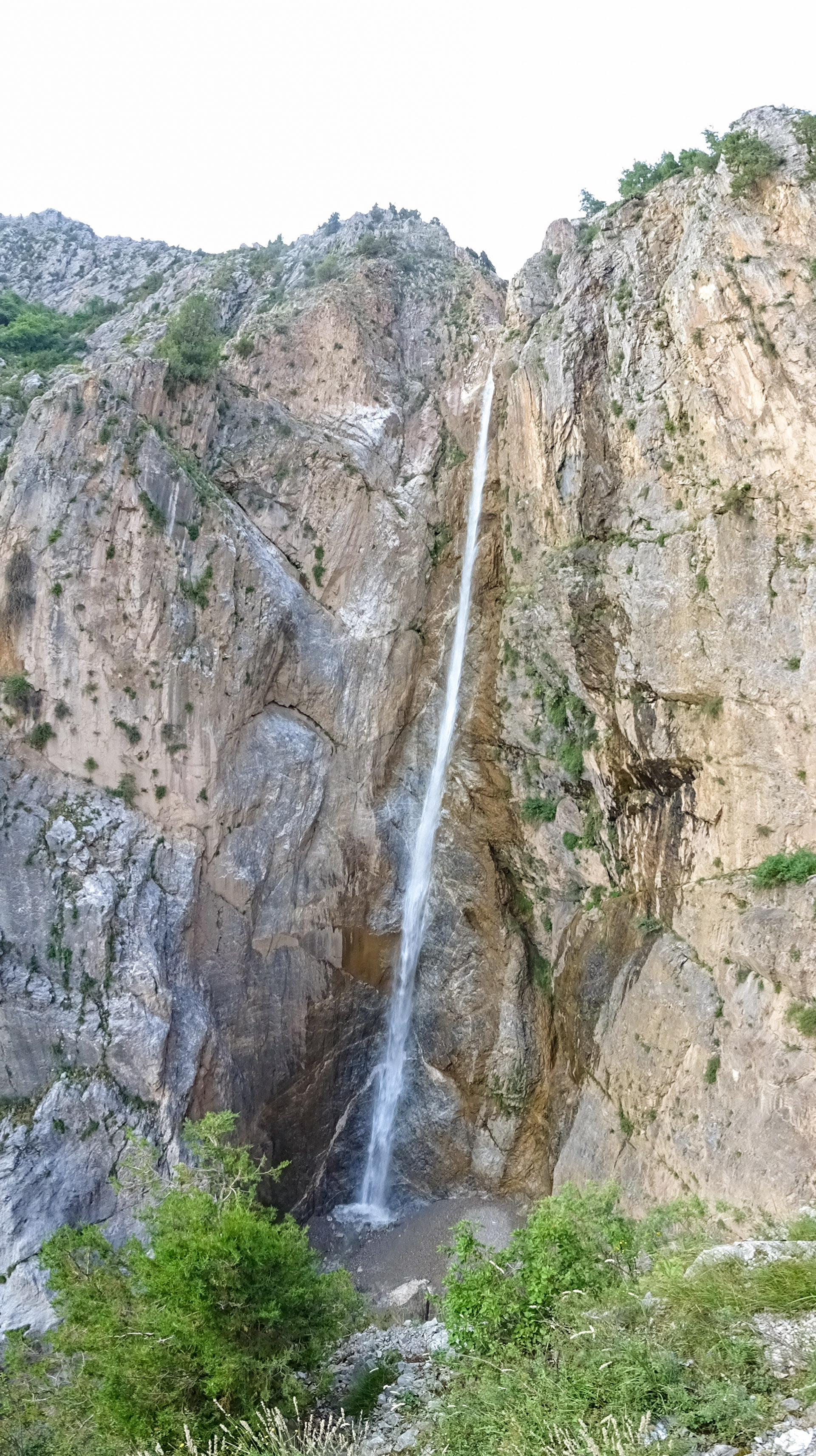 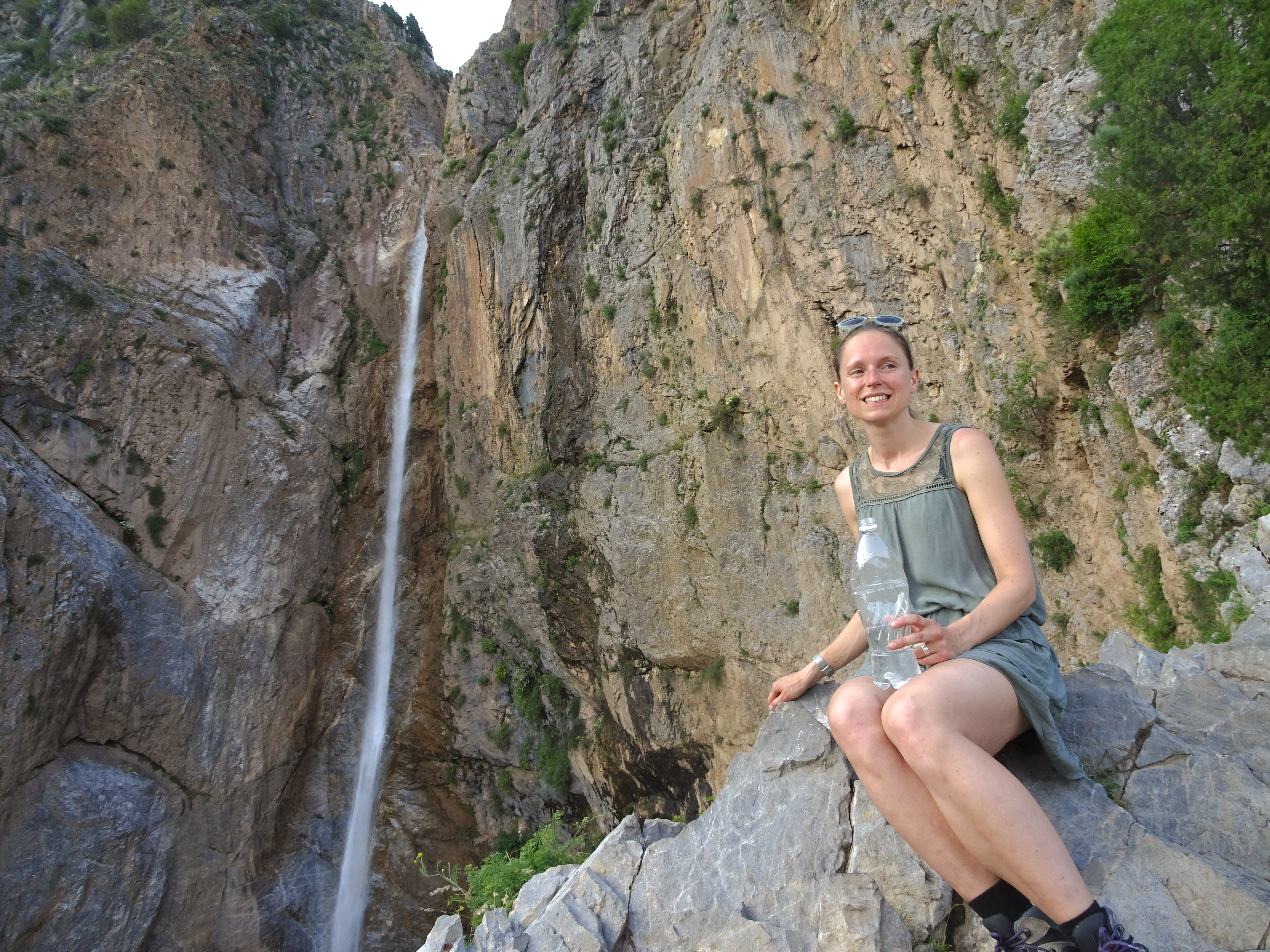 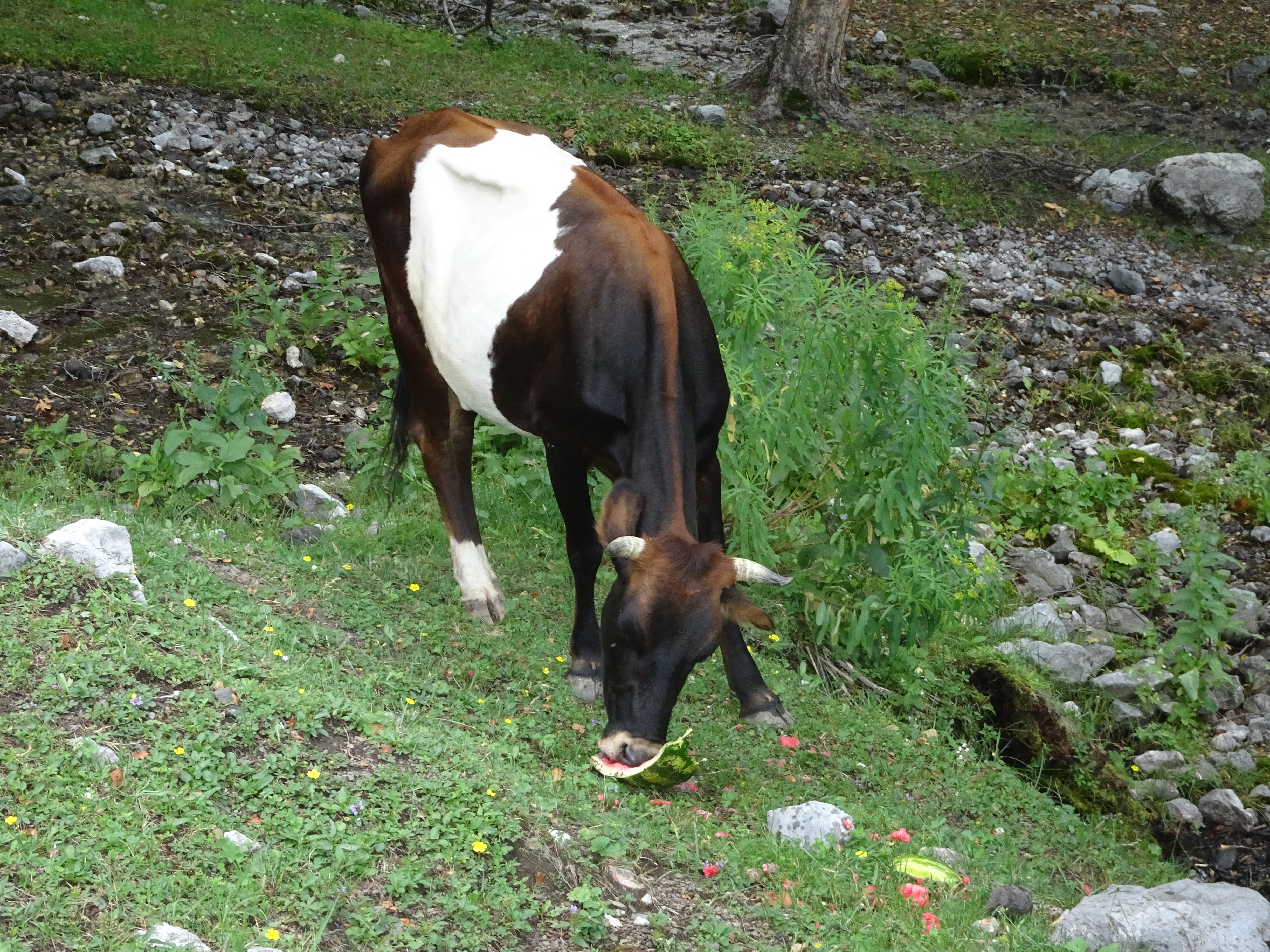 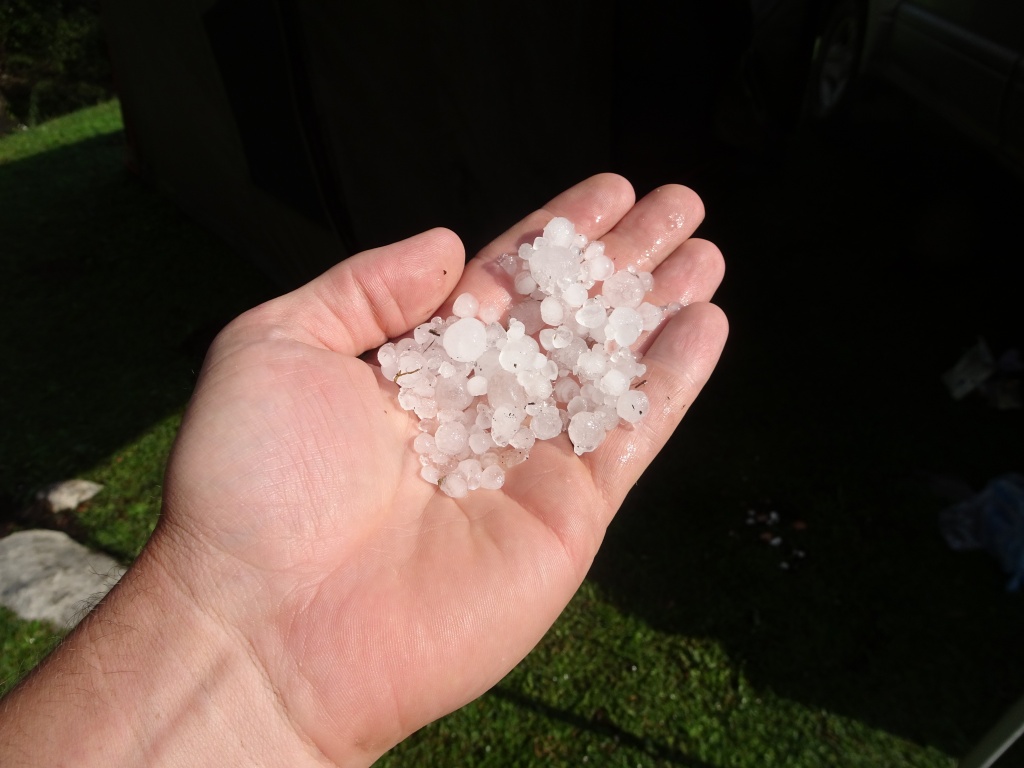 After a violent hail storm 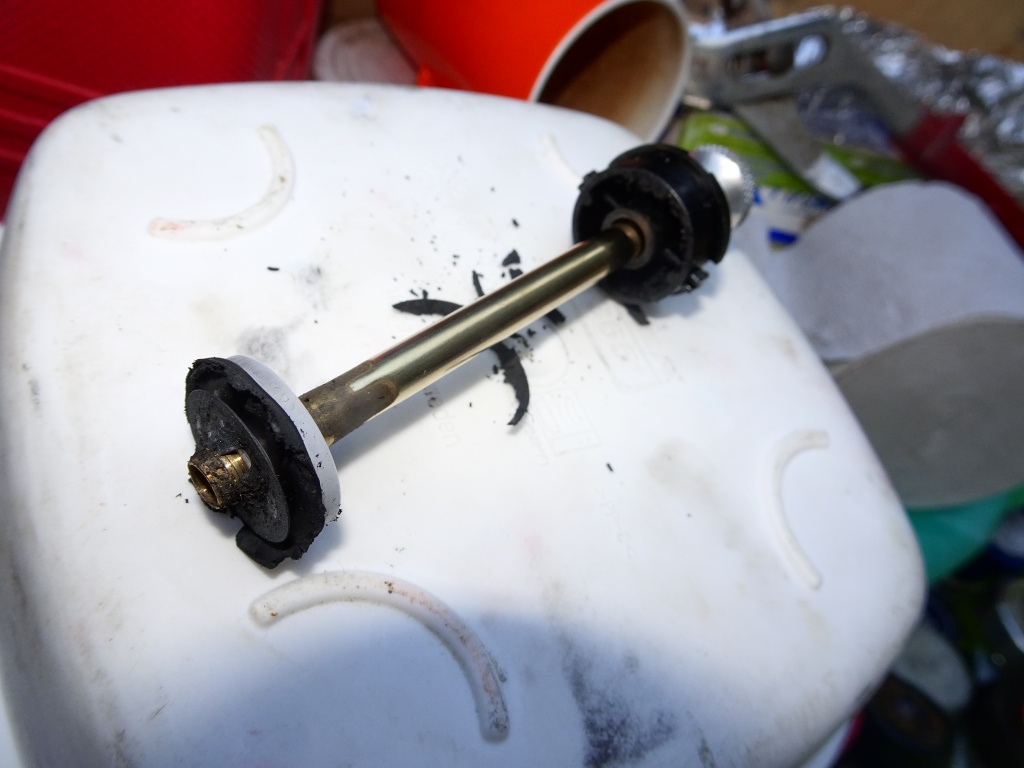 We drove east through increasingly more beautiful landscapes. Kyrgyzstan is so incredibly green and lush, and the skies were clouded in the most vivid way. The sun shone through with golden rays, lighting up certain area’s as if it was their turn to receive warmth.

There was an extremely windy pass that we had to go over. The car was shaking and when we parked and got out, we were almost blown off the mountain. After that, we started looking for a spot to camp. We drove off the road, to the left and entered the green rolling hills between higher peaks. There were multiple paths leading to various huts and tents, and there were patches of animal ground. Eventually we found a place with a good view and reasonably little animal dung. We set up camp, after which we made a nice potatoes and salad meal. The night was quiet and starry, and a bit cold. 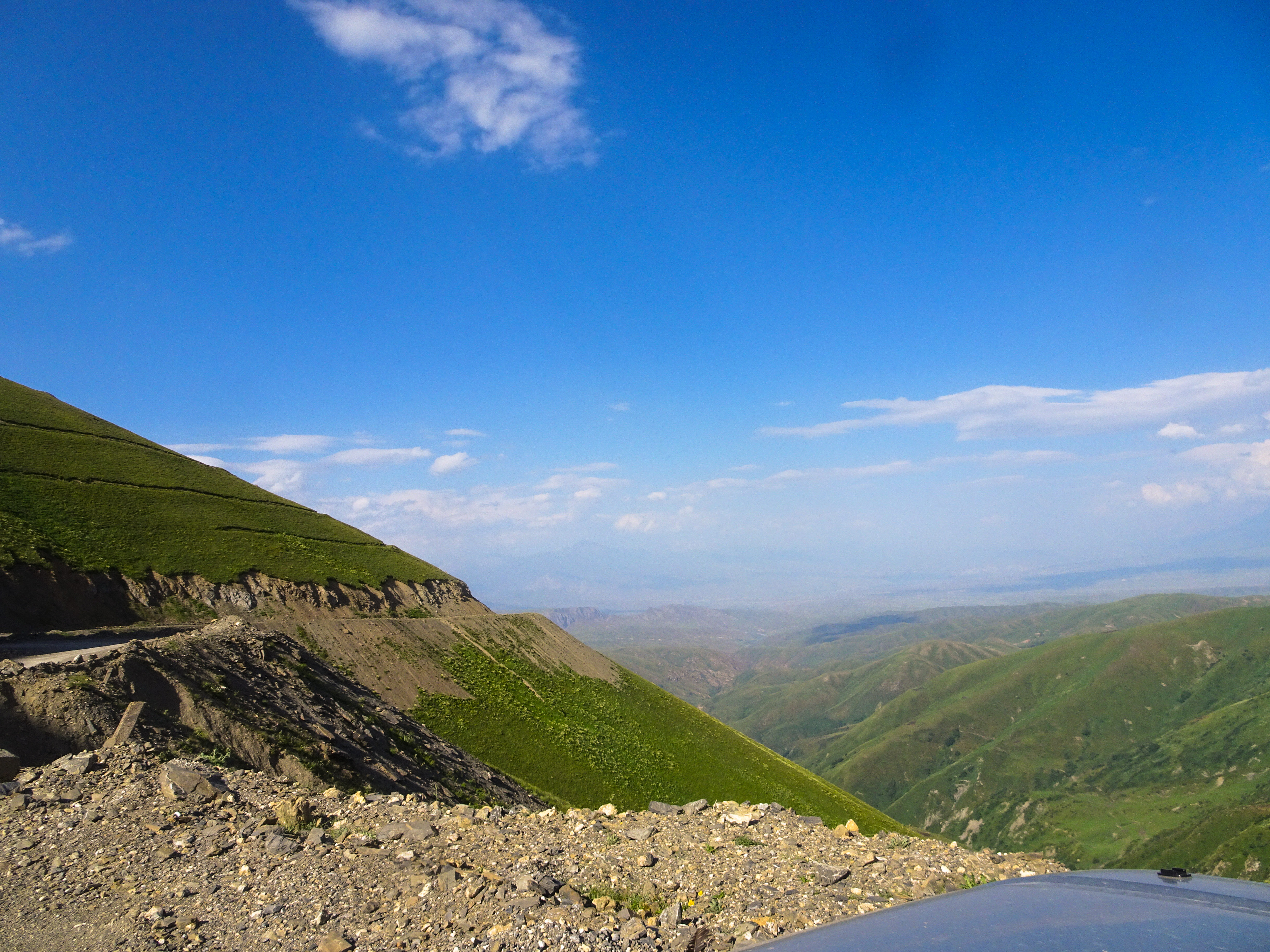 One of the many roads on the side of a mountain 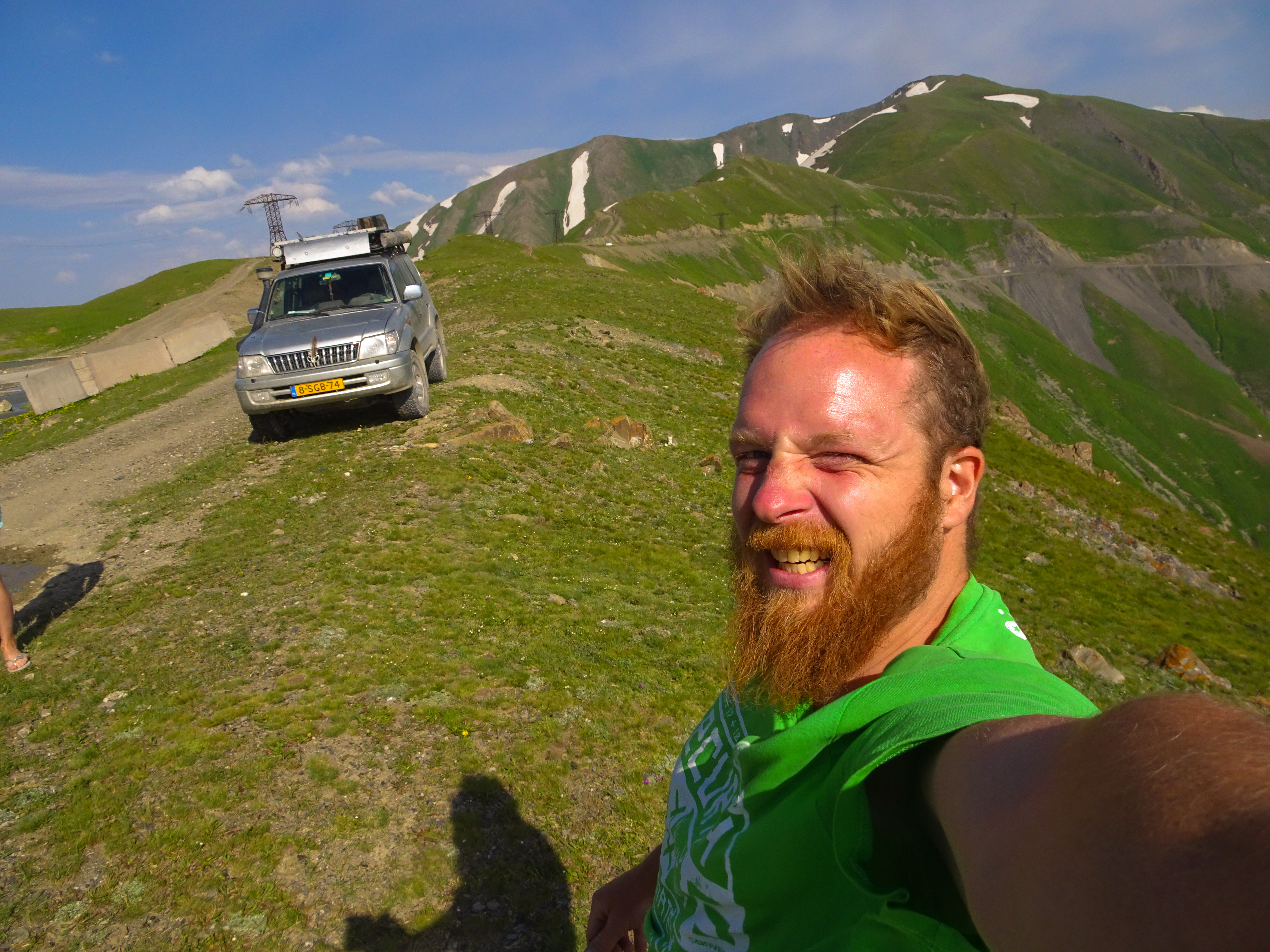 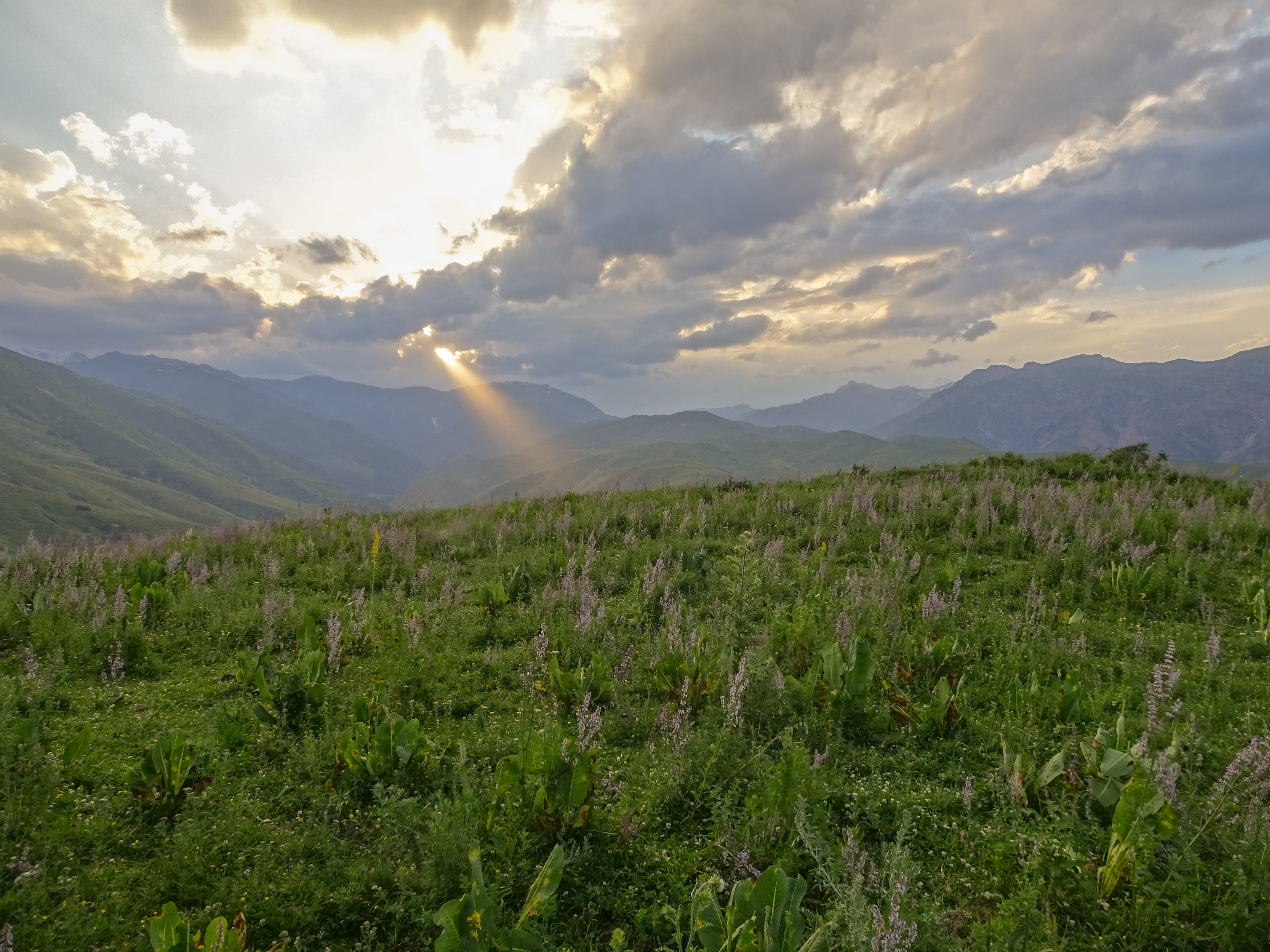 Bless this area, in particular 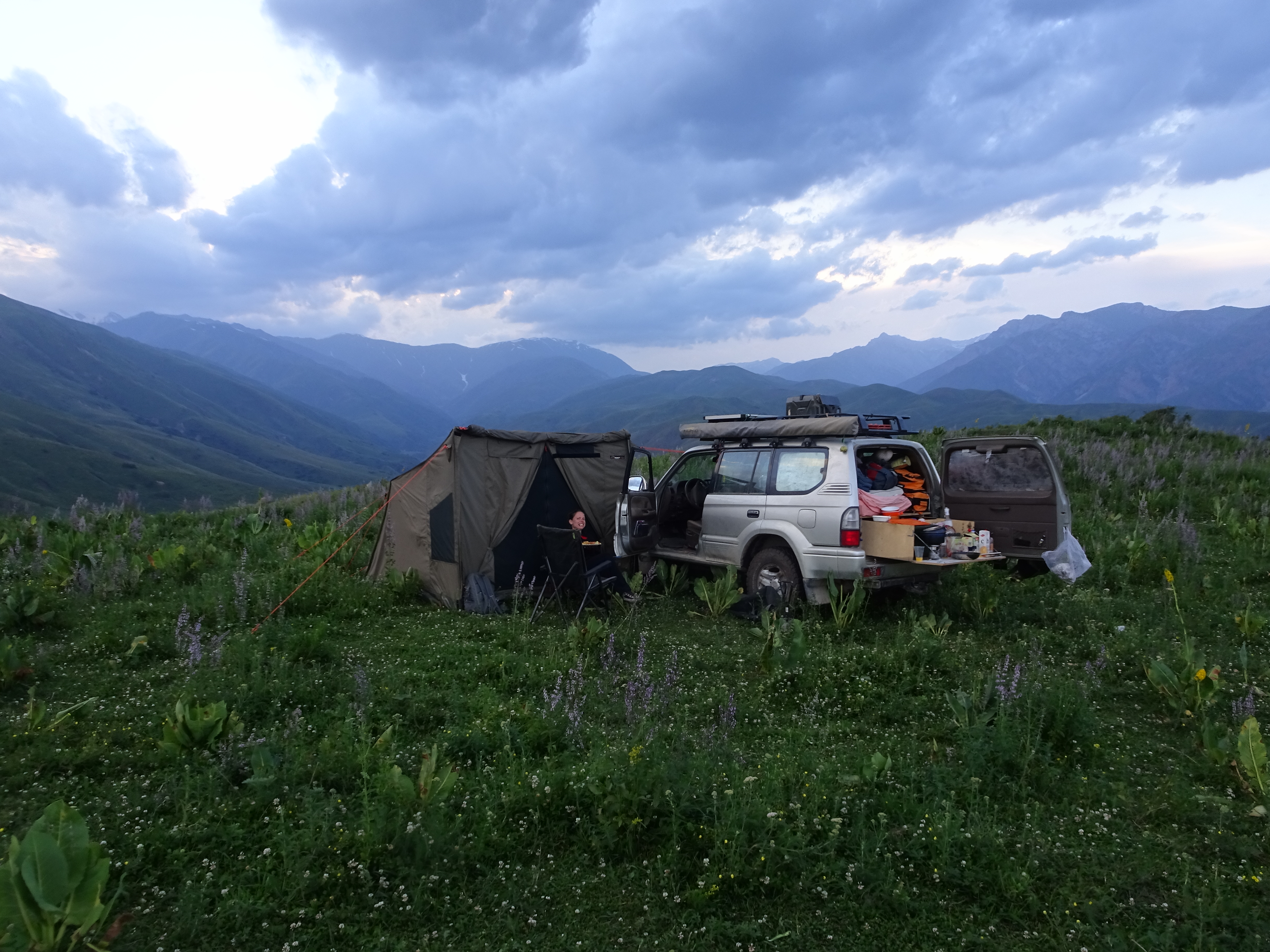 When we woke up there were 2 herders with their horses and cows standing near our tent. People in rural areas simply sit down and watch you do your entire morning ritual and camp cleanup. Sadly, one of the guys was a little too interested in my pocket knife and would like to have it as a present. I did not give it to him since it was my only good knife. When he left, he passed the door of my car and simply took it without me seeing it. I noticed when he had been gone for a while. A little grumpy, I started the drive towards Naryn. We were planning to pick up a permit to drive south to a lake called Kel-Suu, which was formed by an earthquake, followed by a rock slide. Also, the area is known for awesome off road adventures. The grumpiness quickly subsided because the landscape turned truly epic. Amazig rock formations amidst the ever present bright green, and crazy views over huge mountain area’s. Right after another pass, we met again with Eliot and Mayu (on their bicycles), which I had met before, also in Murgab. We caught up a bit, looked at the view together, and decided to find a spot together to camp. So Ilse and I drove ahead to start looking for a nice spot. We followed the curvy road down the mountain to enter a flat area. There were some old buildings to the right and a row of trees for cover from the (still quite strong) wind. We waited for them to come down from the mountain and set up a cosy camp together. We played games (Janush ), had a few beers and smoked some of the marijuana that Elliot found on the side of the road :). It didn’t do much but it was entertaining. The next day started pretty good, but soon it started raining relentlessly. Elliot and Mayu decided to stay another day and night, watching some movies and stuff in their tent. Ilse and I packed everything up and left for Naryn. 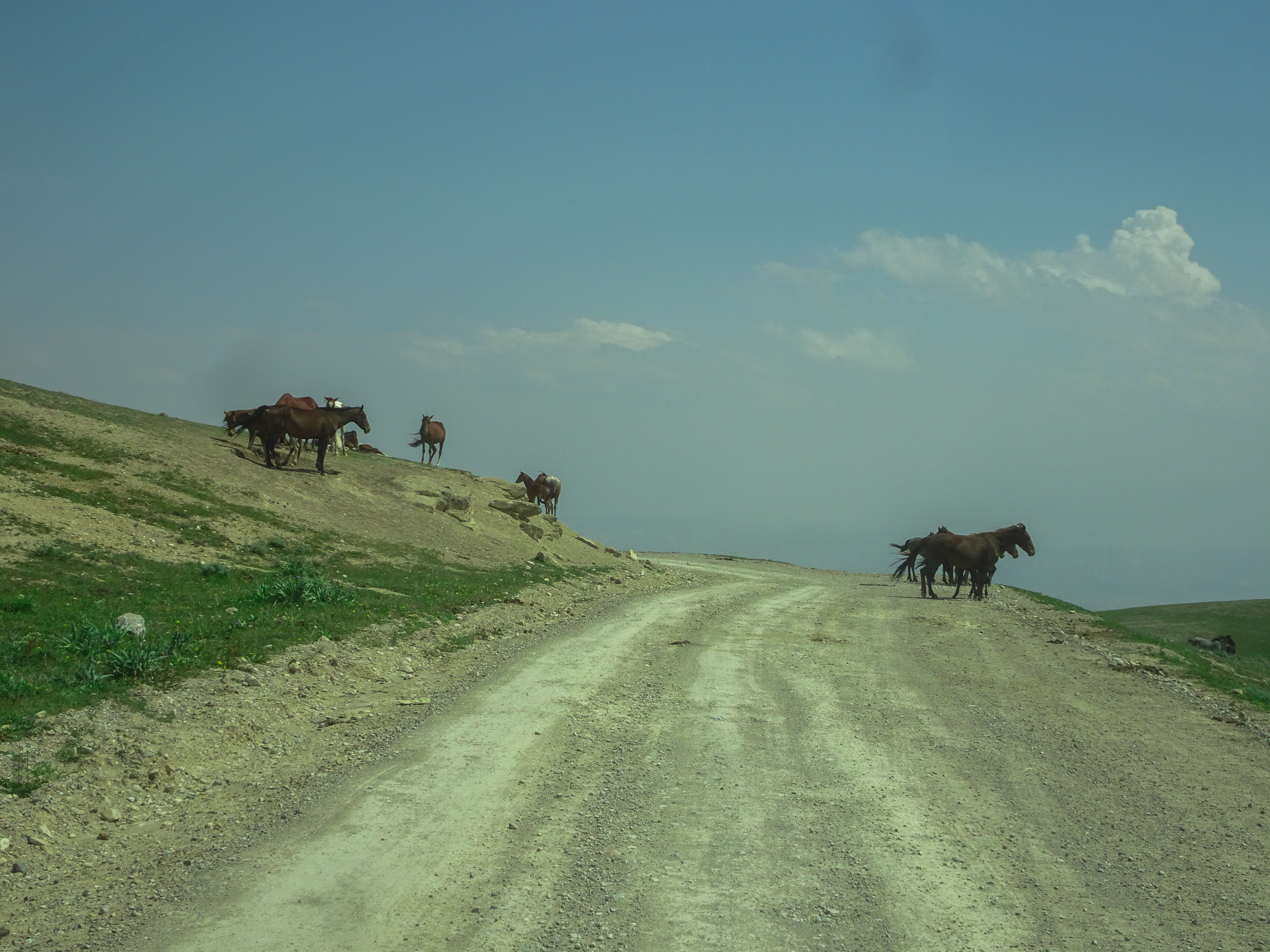 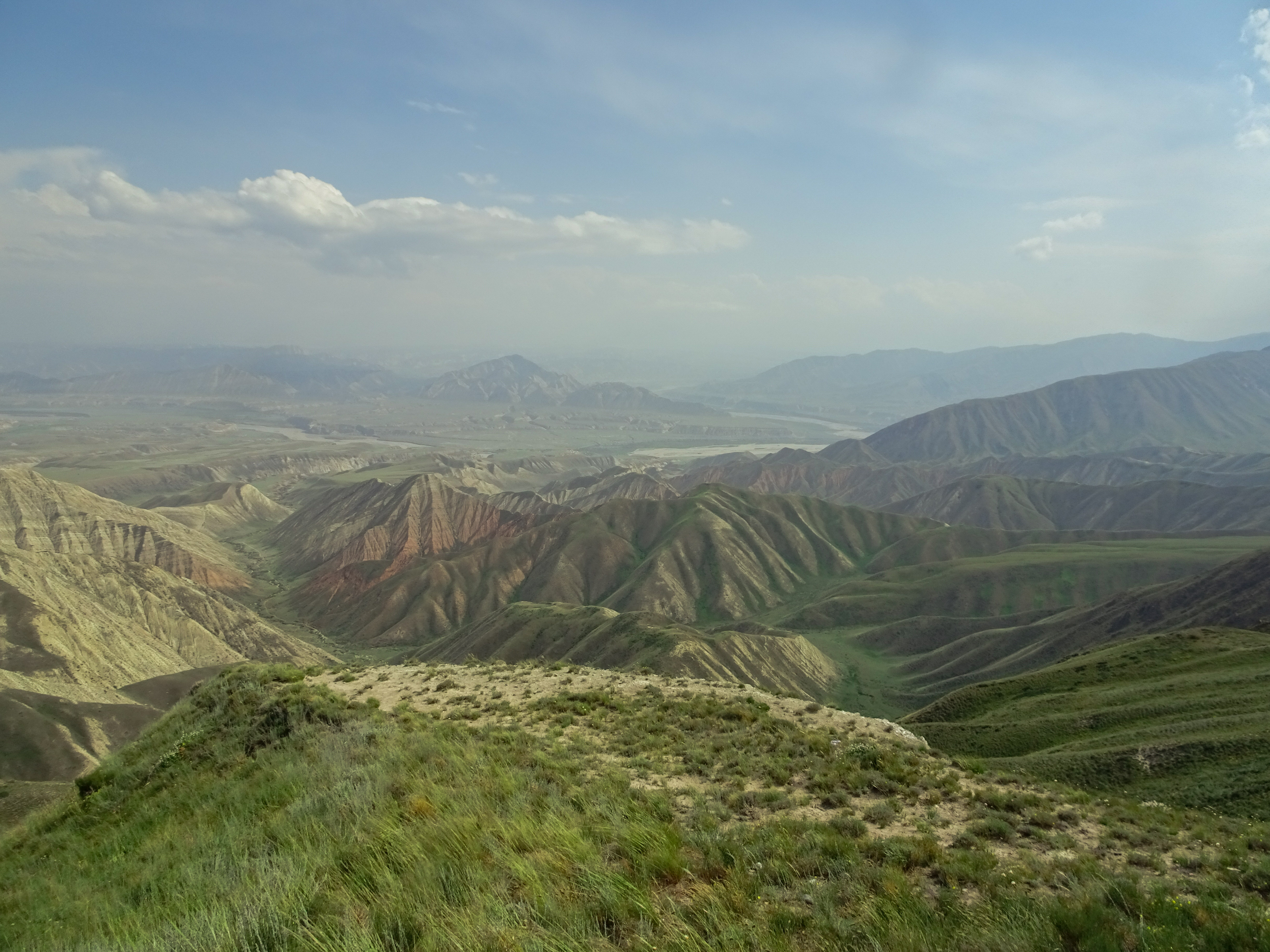 The view from after the pass 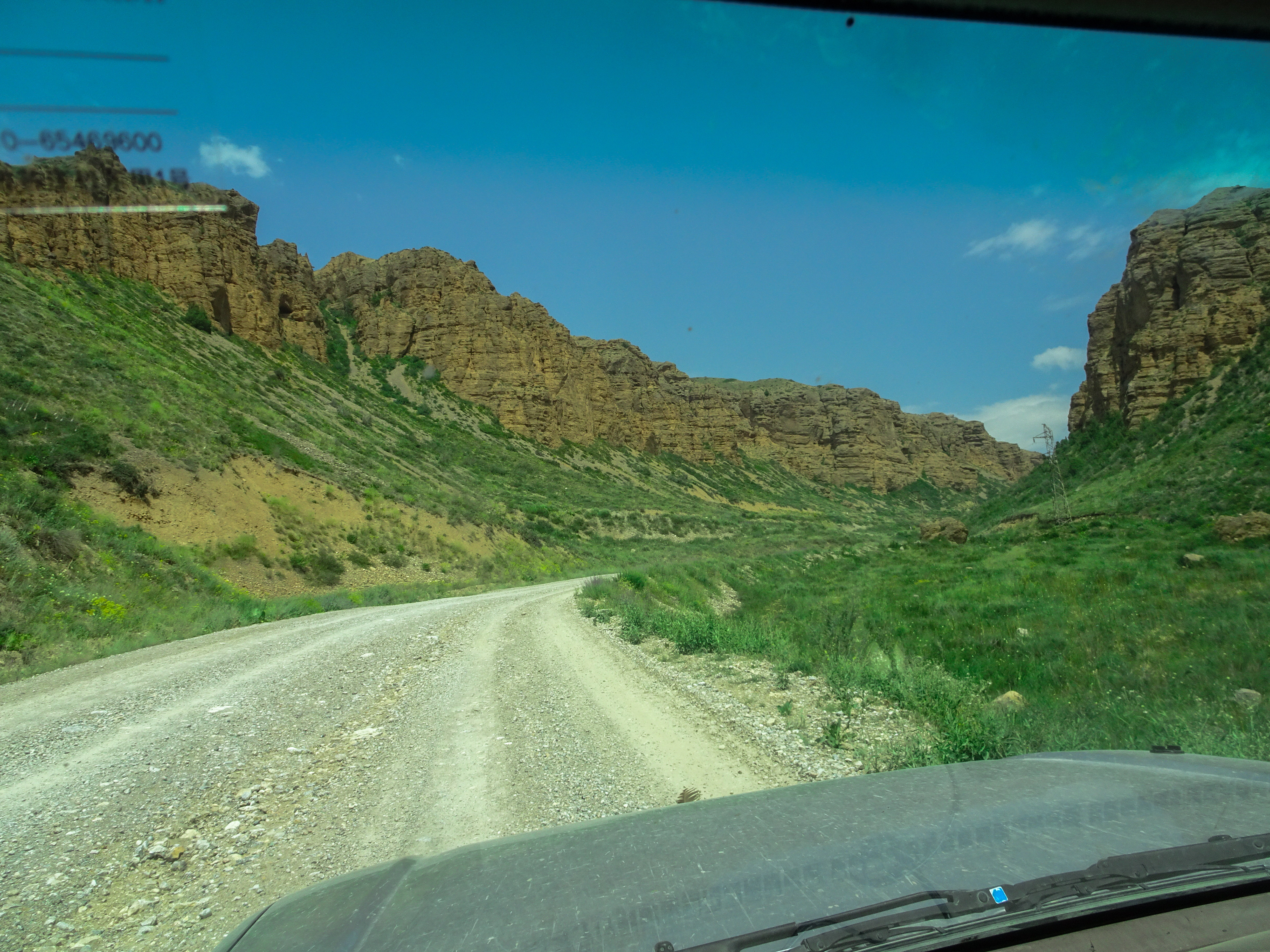 Beautiful rocks on both sides of the road 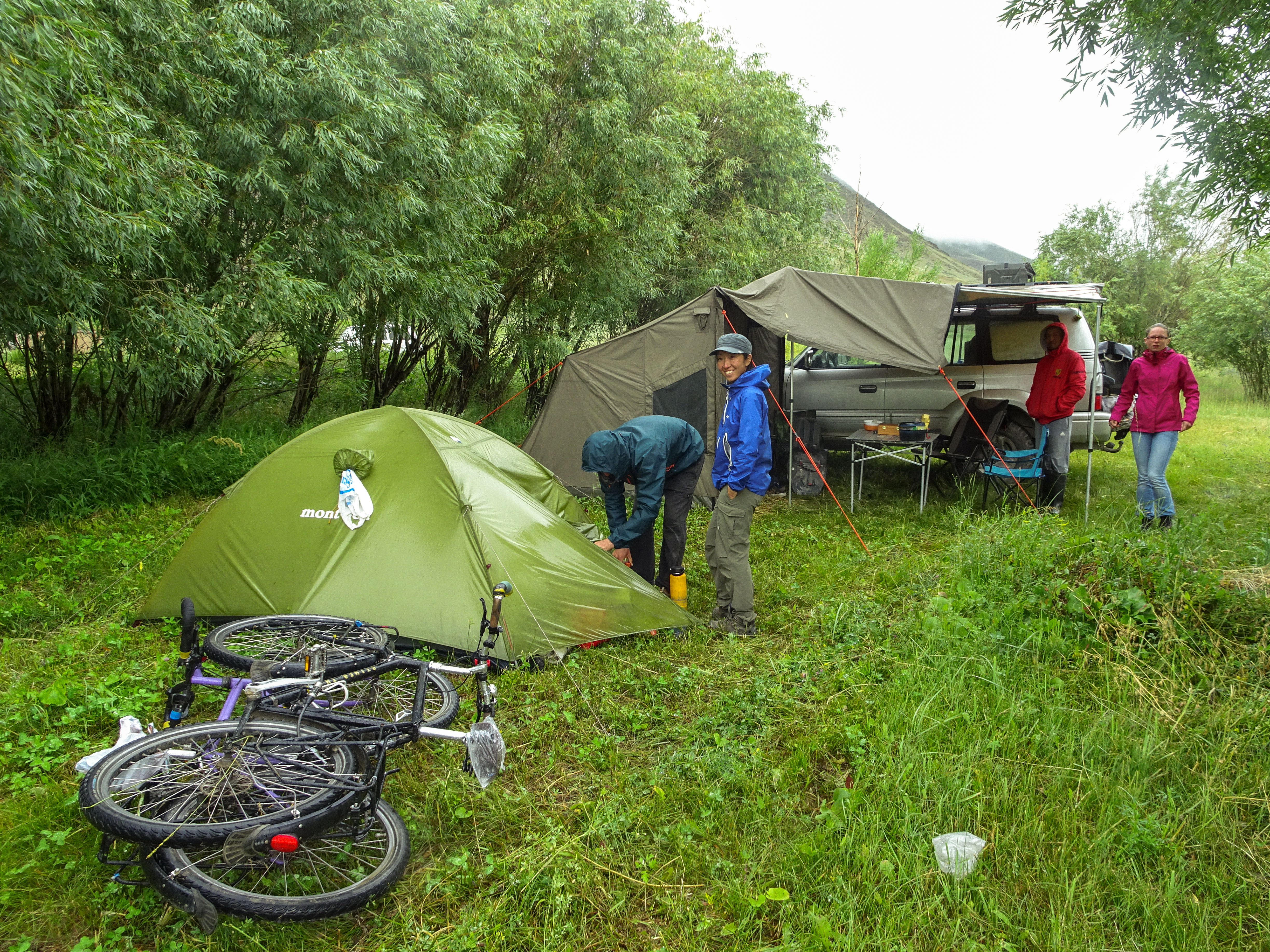 Our cosy camp the next morning

There was a broken bridge, about 30 kilometers from our camp. We asked where we should go and people pointed us to a road that is not on the map. But it was a rather good one, with not a lot of options to go the wrong way. Off the beaten path, and a pretty one as well! 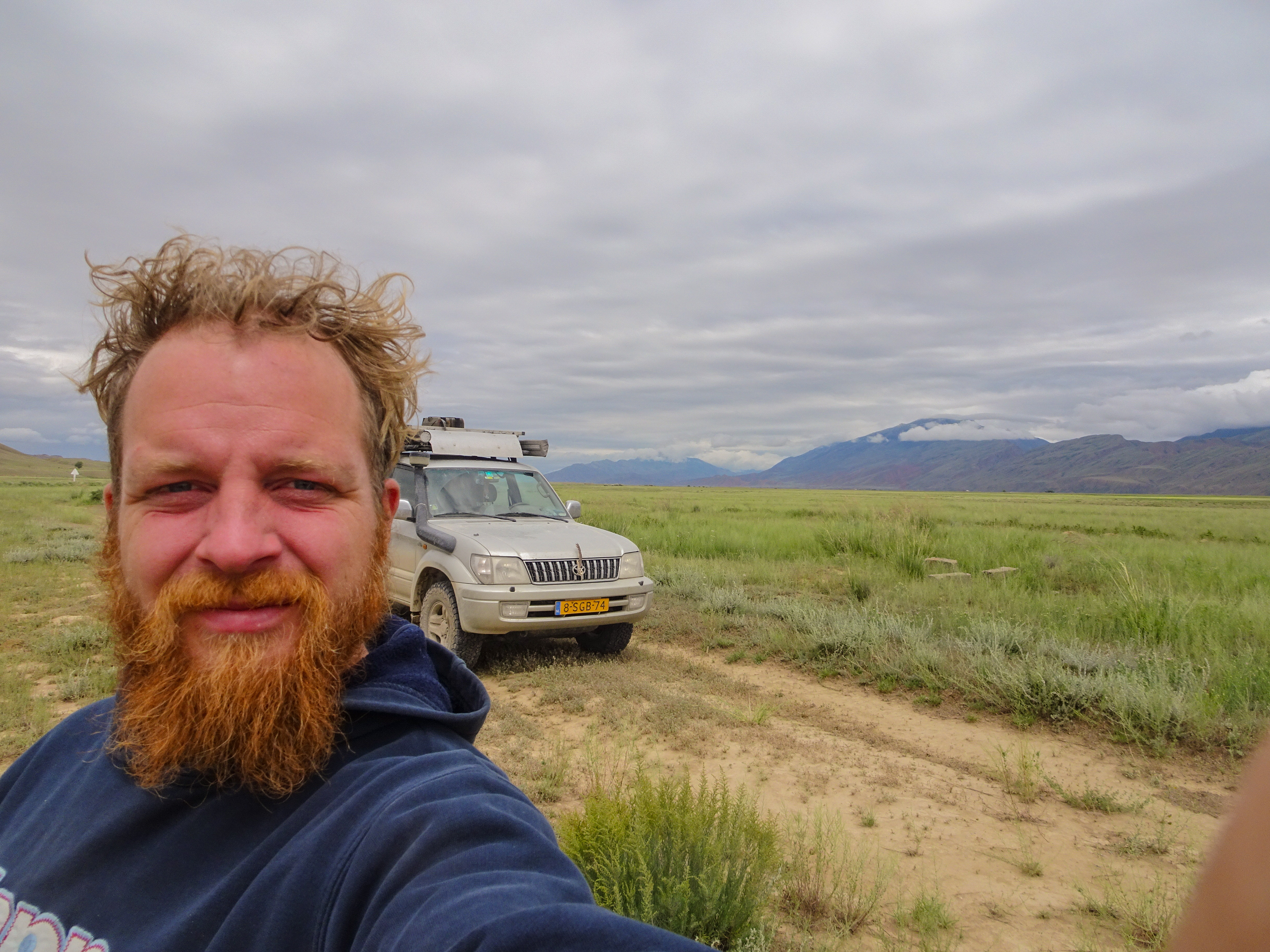 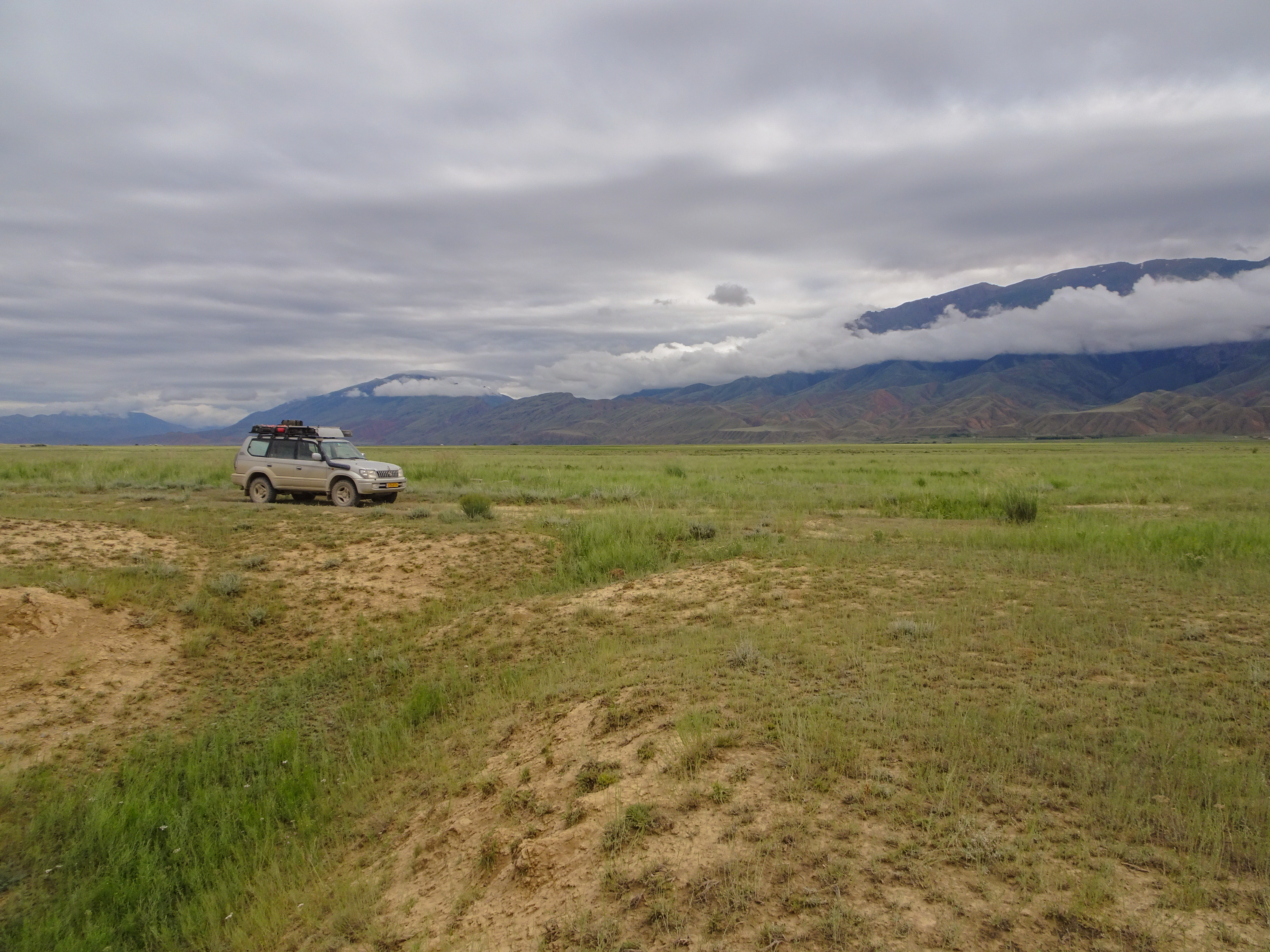 The road led us safely to Naryn, where we stopped directly in front of the CBT (Community Based Tourism) office. CBT is a big thing in Kyrgyzstan, and in a lot of place you can find something similar. We went into the building and were helped out by a very nice (but little stressed) lady. She arranged the permits for us that same day, and also a place for us to stay the night near the office. While she was busy with the permits, Daniel walked into the building! And not a very long time later, also Fanny! We tried to meet that evening for a beer but Fanny couldn’t make it. So Daniel, Ilse and I went for a dinner and beer in a local restaurant. The food was good in this… interesting place. But at some point the music started, which was so loud that my ears literally cracked. So we got the hell out of there, to find out that we were sharing our flat with… Ashley and Natalie (we met in Osh)! Naryn really is a gateway into the rest of Kyrgyzstan.

People were talking about a cultural festival near lake Karakol, with free transportation there, and back. Everybody we knew was going so we decided to postpone our trip to Kel-Suu and join them the next day (at 6). 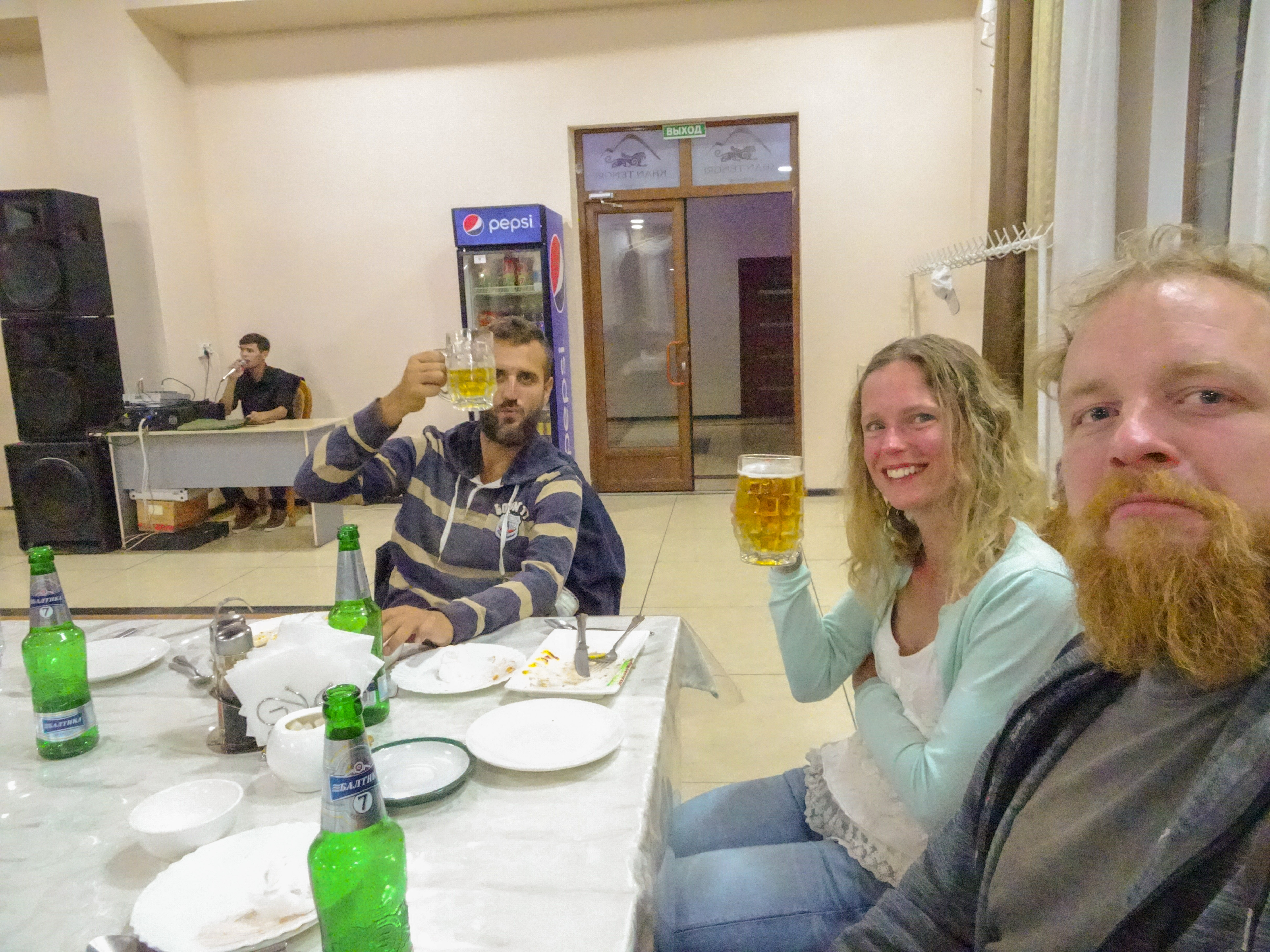 Waking up at 6 sucks, but we managed. The minibus left a little after 7 with a bunch of people. We arrived about 3 hours later at the festival grounds. There were all kinds of local customs, clothes, games and music. And a lot of sun. At some point Ed and Mark also turned up. Also the Austrians were there with their massive truck, but we didn’t get to talk much. There were a few versions of plov, one of them by the people that gave us a demonstration in Osh. It looked like everyone I got to know on the way since Dushanbe clustered together that day. 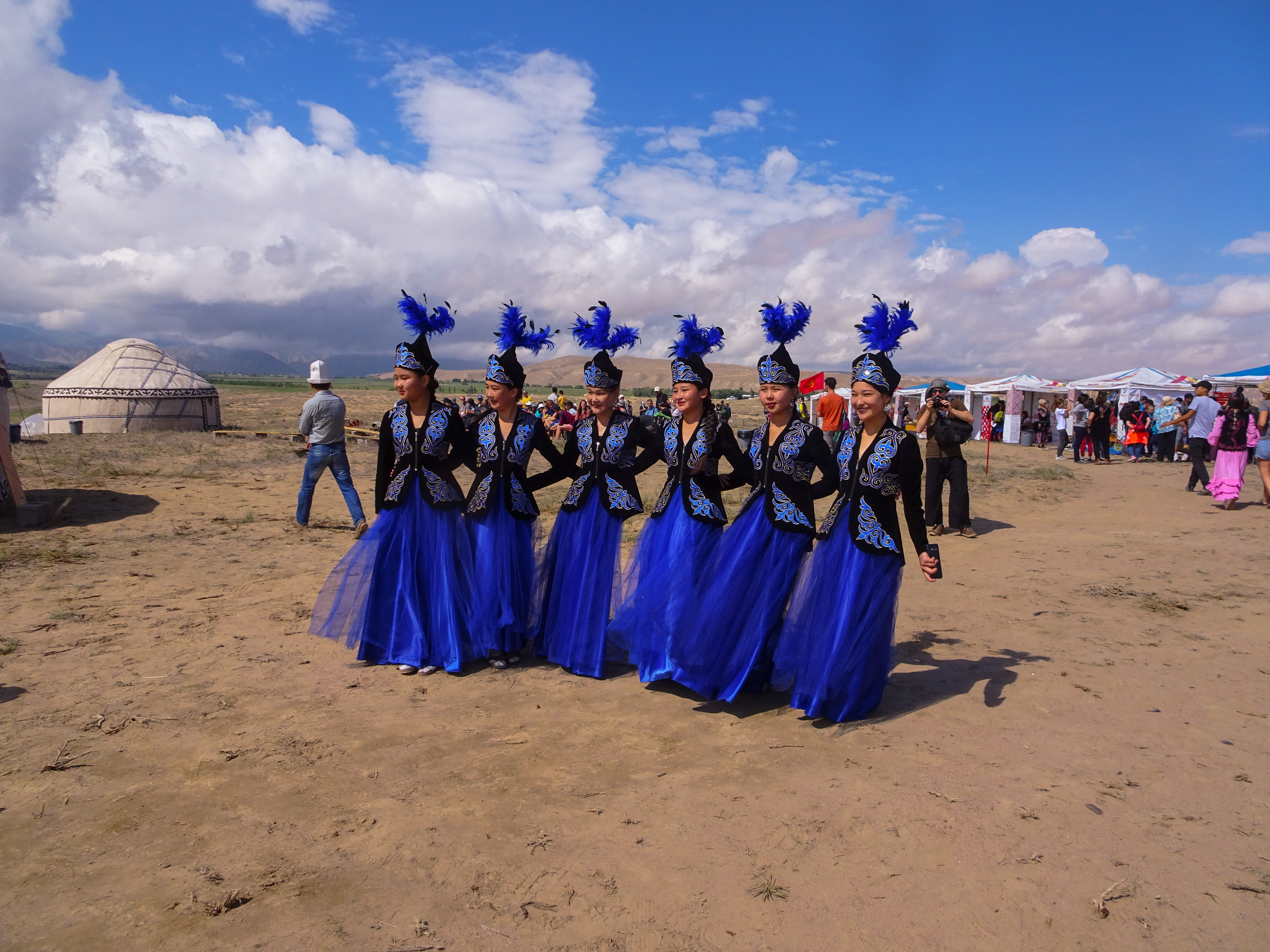 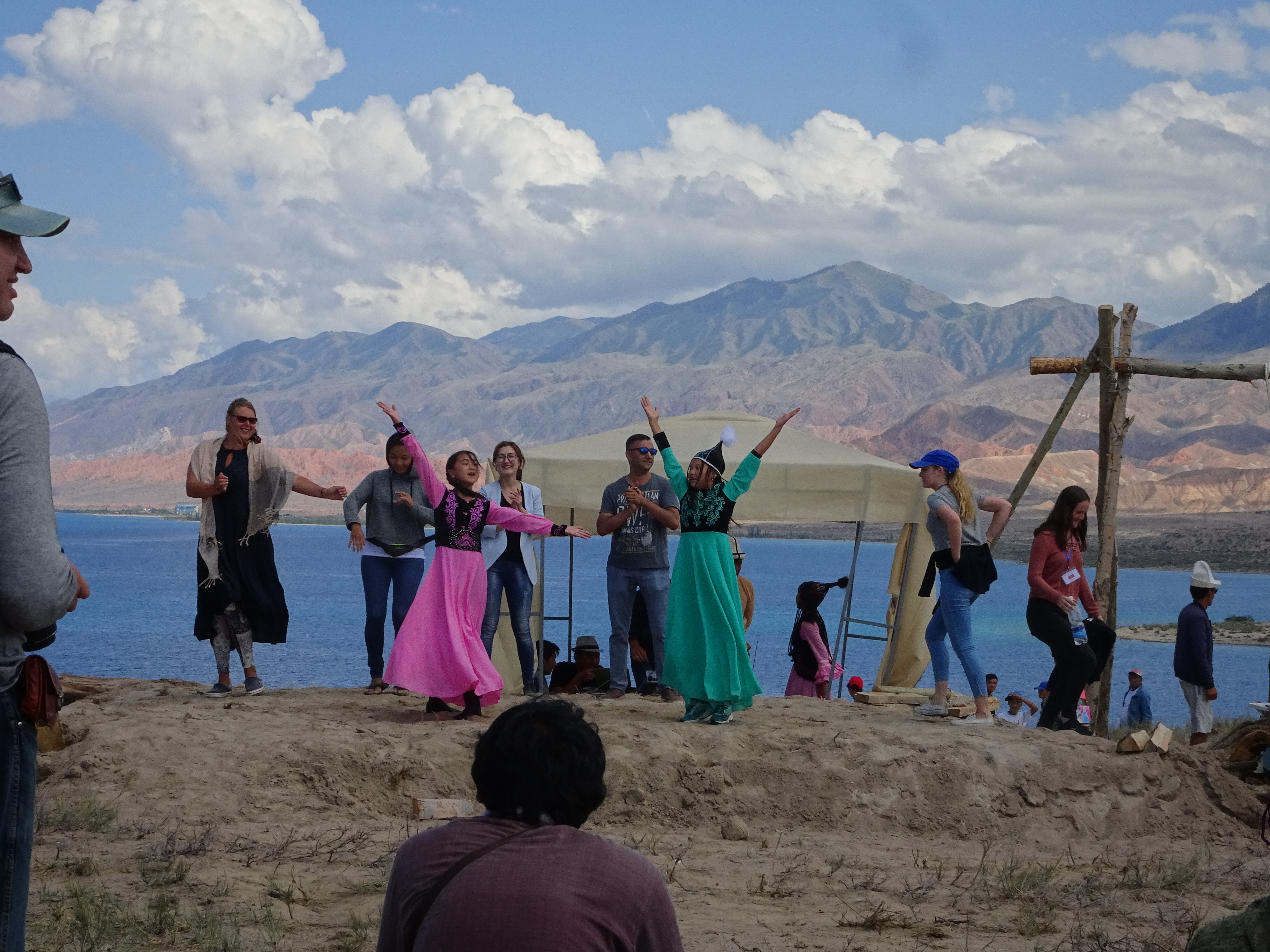 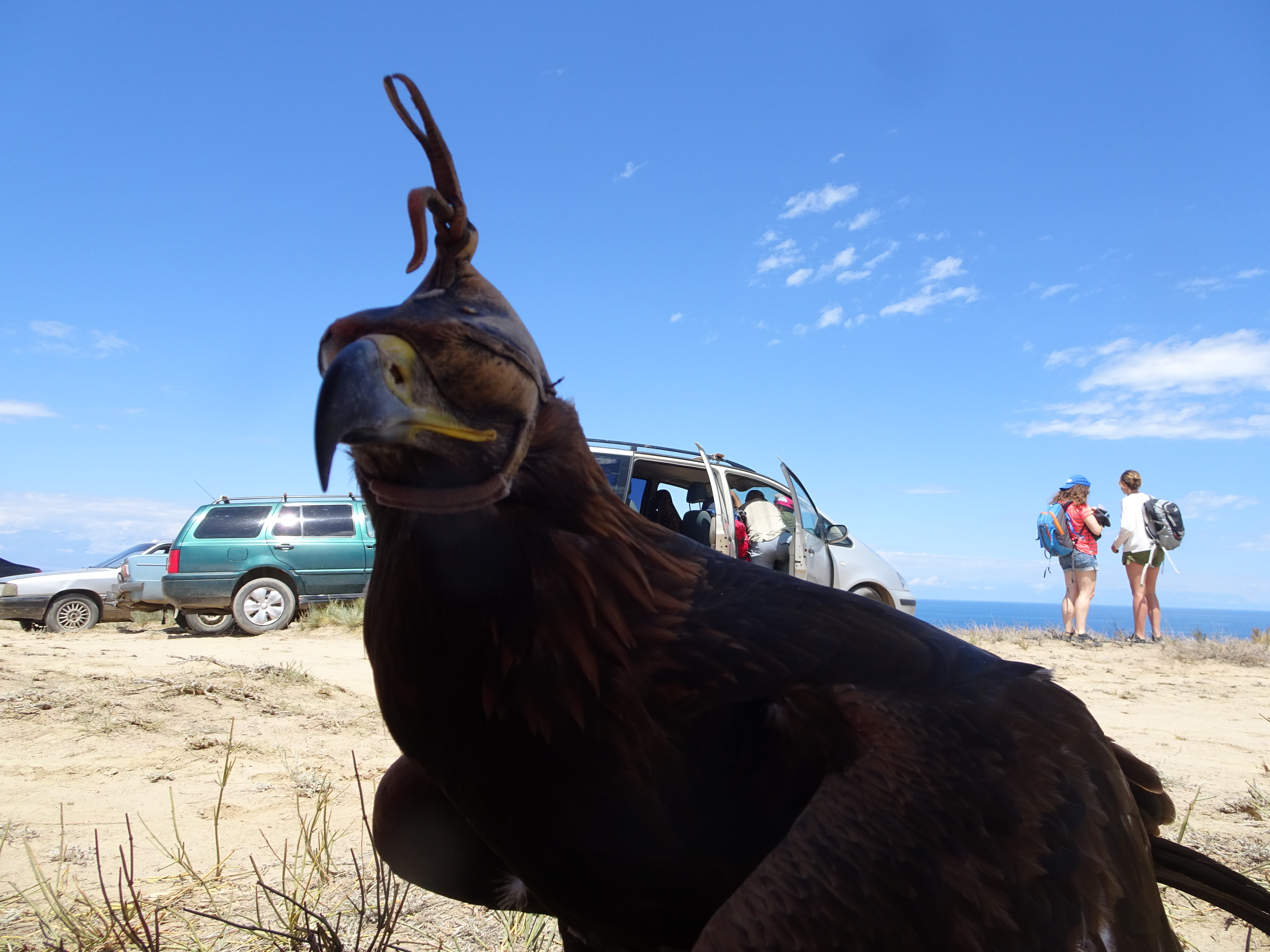 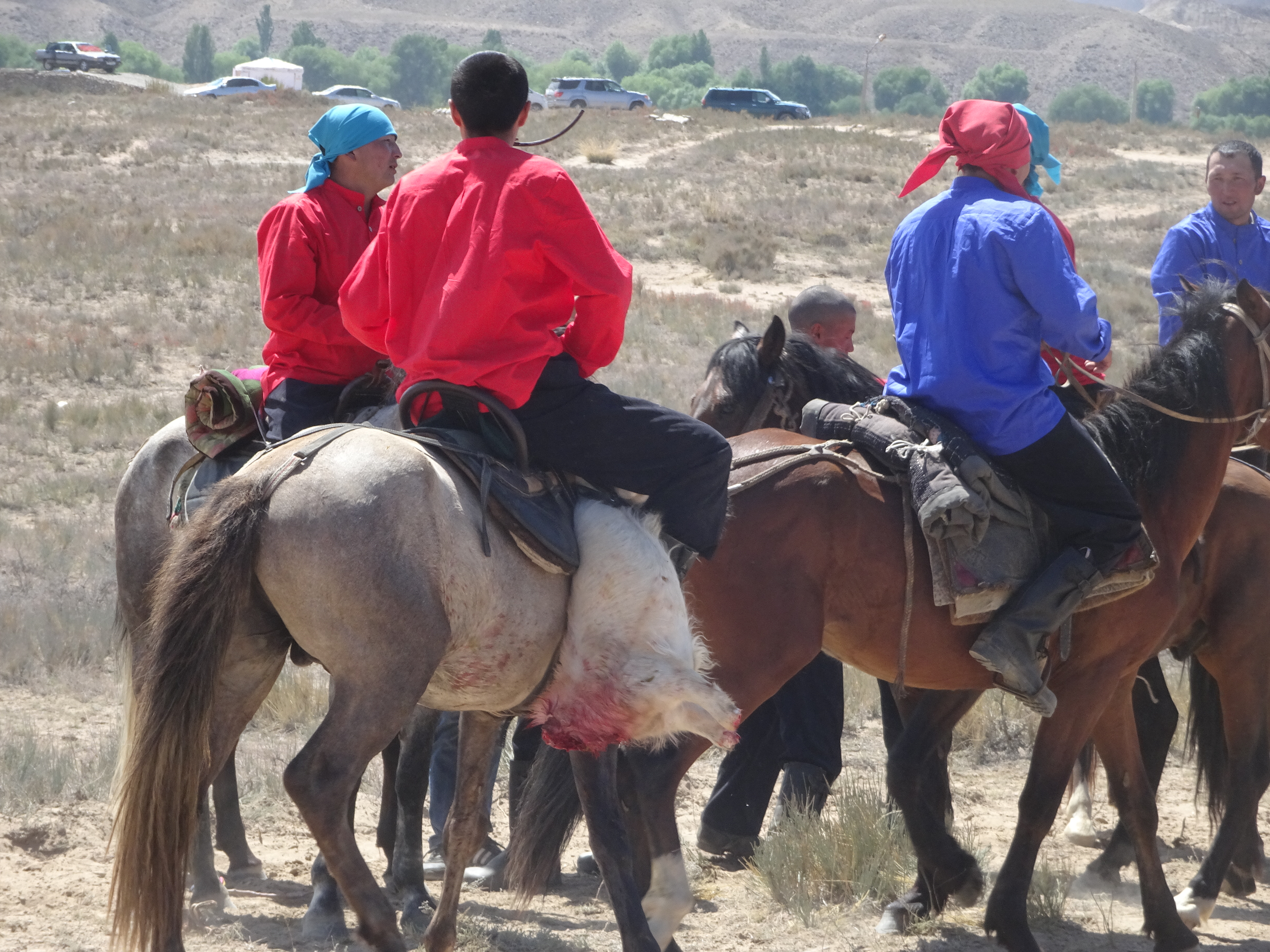 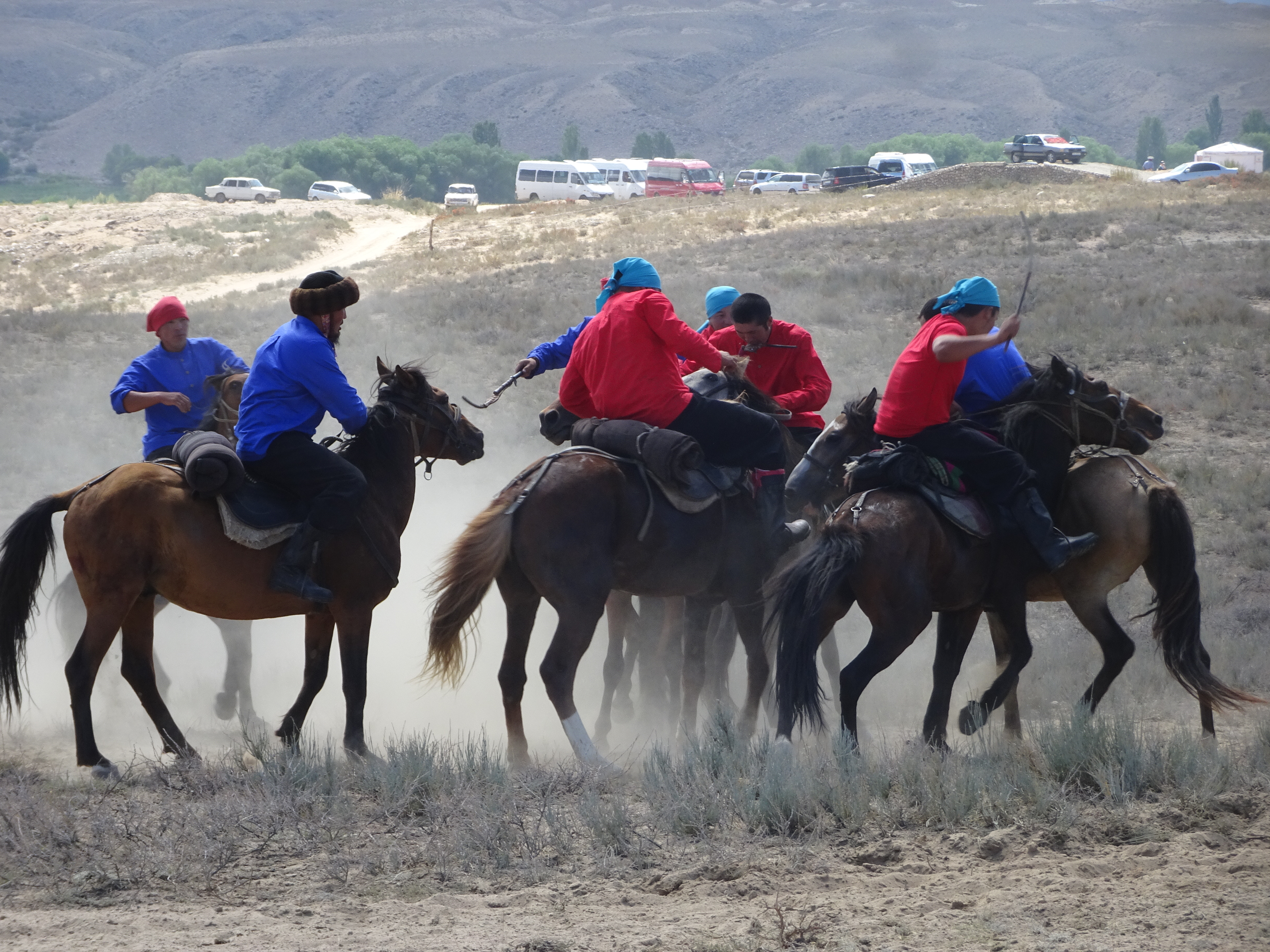 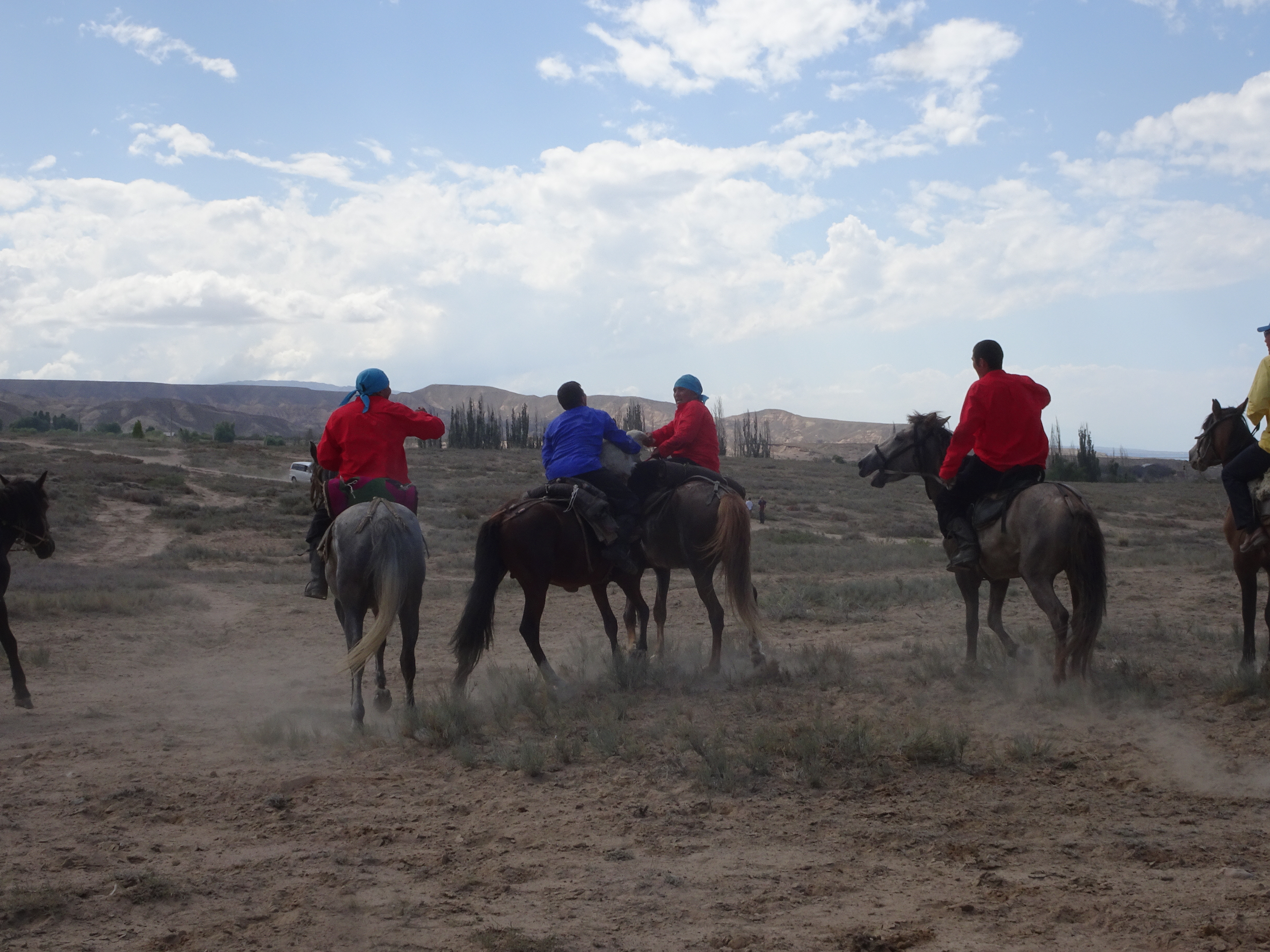