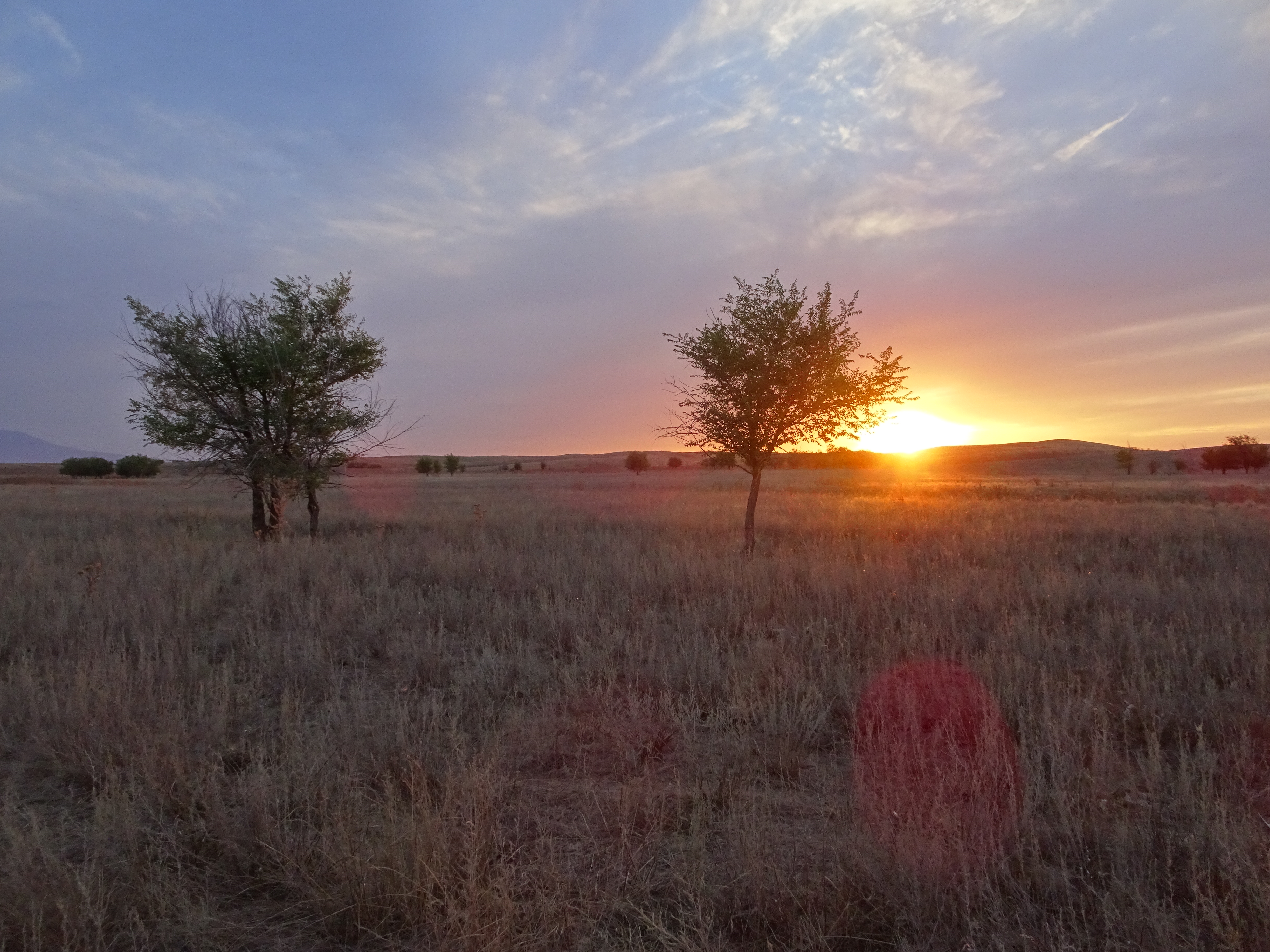 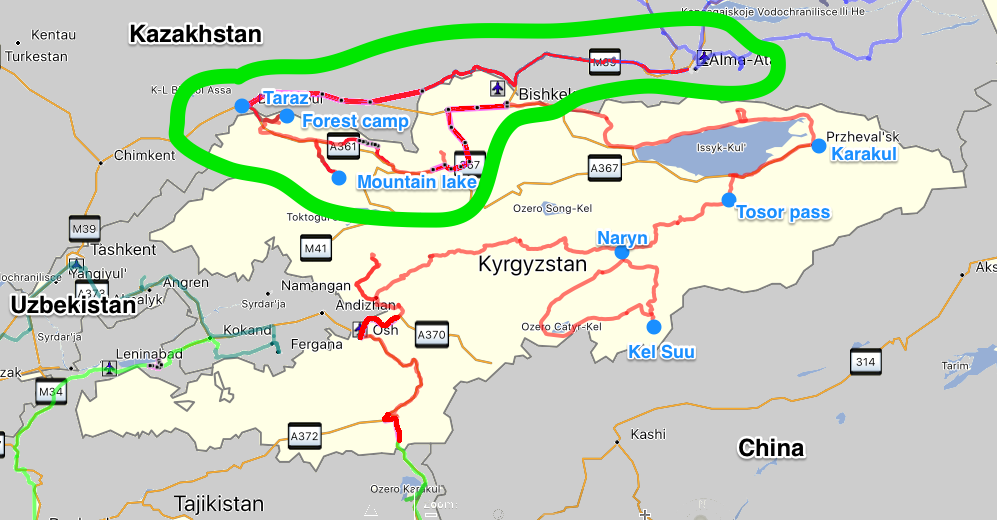 Alone again! But only for like a week because my friend bas decided to book a flight to Astana, and take a train to Almaty to join me for a couple of weeks. In Bishkek I did some shopping at the Osh Bazaar and drove off to the west. I wasn’t quite sure what to find there but on the map I found a small lake at the end of a road that seemed worth checking out. So I started driving and ended up in a field in the middle of nowhere, with a ton of flies and shit around. Not the place to be, so I moved on for an hour or so until I found a clean, quiet spot near a river where I put up the tent and spent the night. The surroundings were again, stunning. 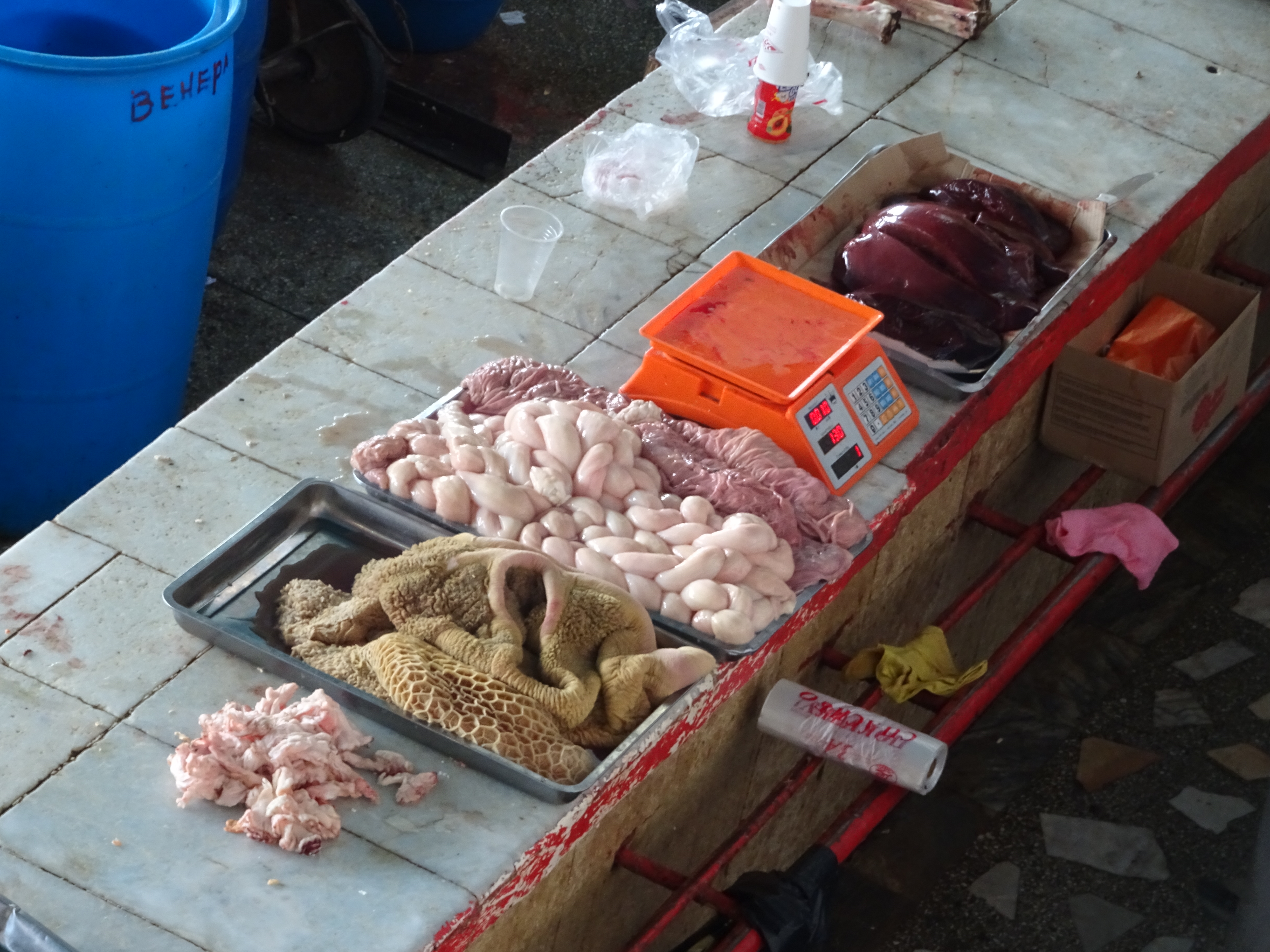 I didn’t buy this 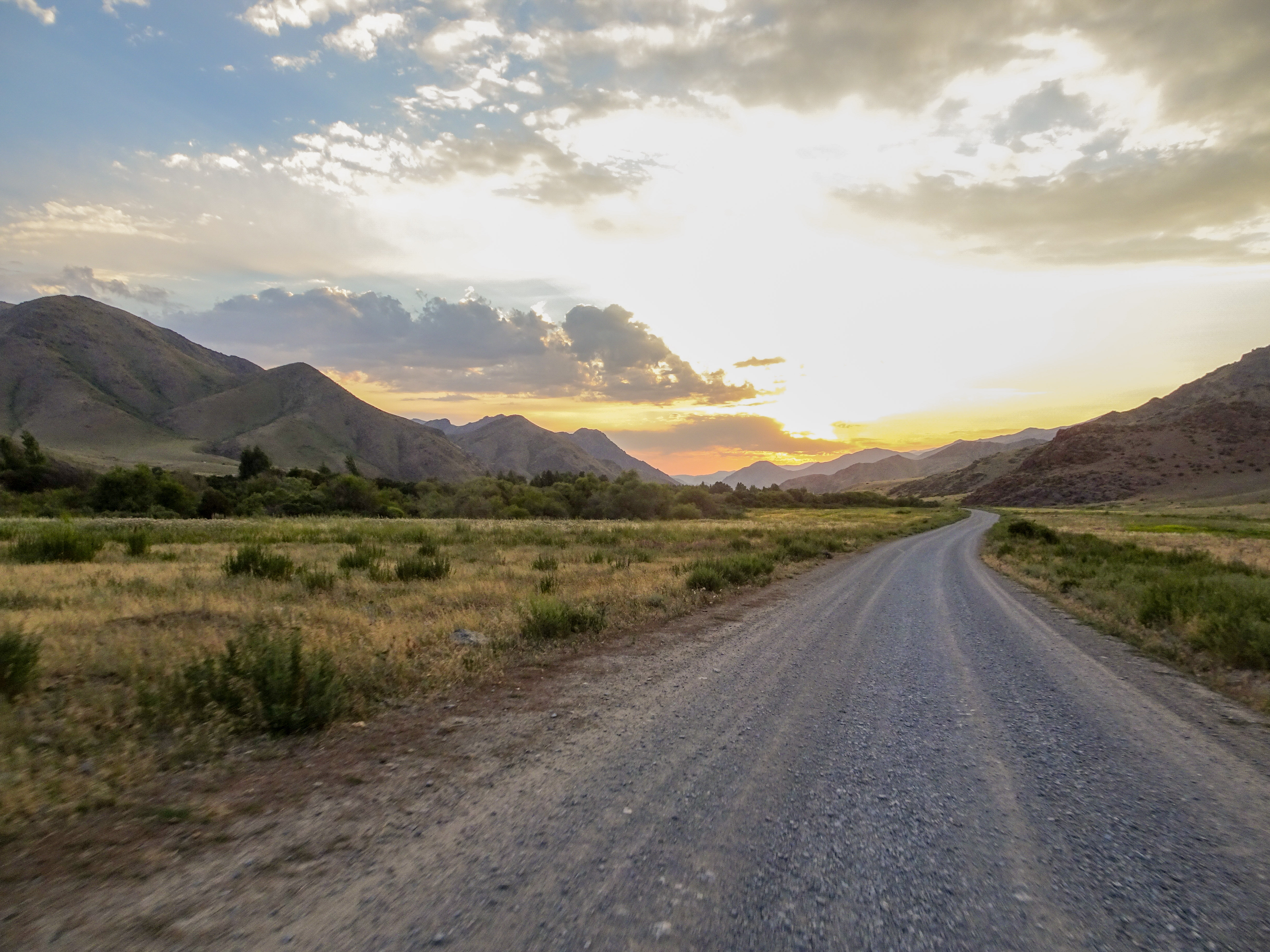 The day after it was time to find the end of the road, where the mountain lake would be. To be allowed into this area, foreigners have to pay a small fee and state how long you want to be there. But it was definitely worth it. The road flowed through a mountain range along a river coming from the lake. It was a terrible road that lasted for about 40 kilometers. When I arrived I took a little walk to check out the lake, and met some Kazakh people who were camping there. It was an interesting bunch and they invited me to join them for some food and a drink in the evening. I joined them a bit later and had some good food, some shots, listened to guitar music and relaxed at the camp fire. I had set up my own tent a bit down the hill and went back there when it got cold. The next morning they asked me if I could help them get some bags and stuff down the valley, so I helped them out. We drove down about 20 kilometers while the rest walked down. We hung out at an (82 year old) farmers place where we had some Kumuz and where I did some repairs to Brutus. When they arrived, I was again invited to join them to their new camp. We had another cosy camp fire night near an abandoned tourist yurt cam. I stayed there until after lunch, and a dip in the freezing river, the next day. Great people! Thanks for the good time! 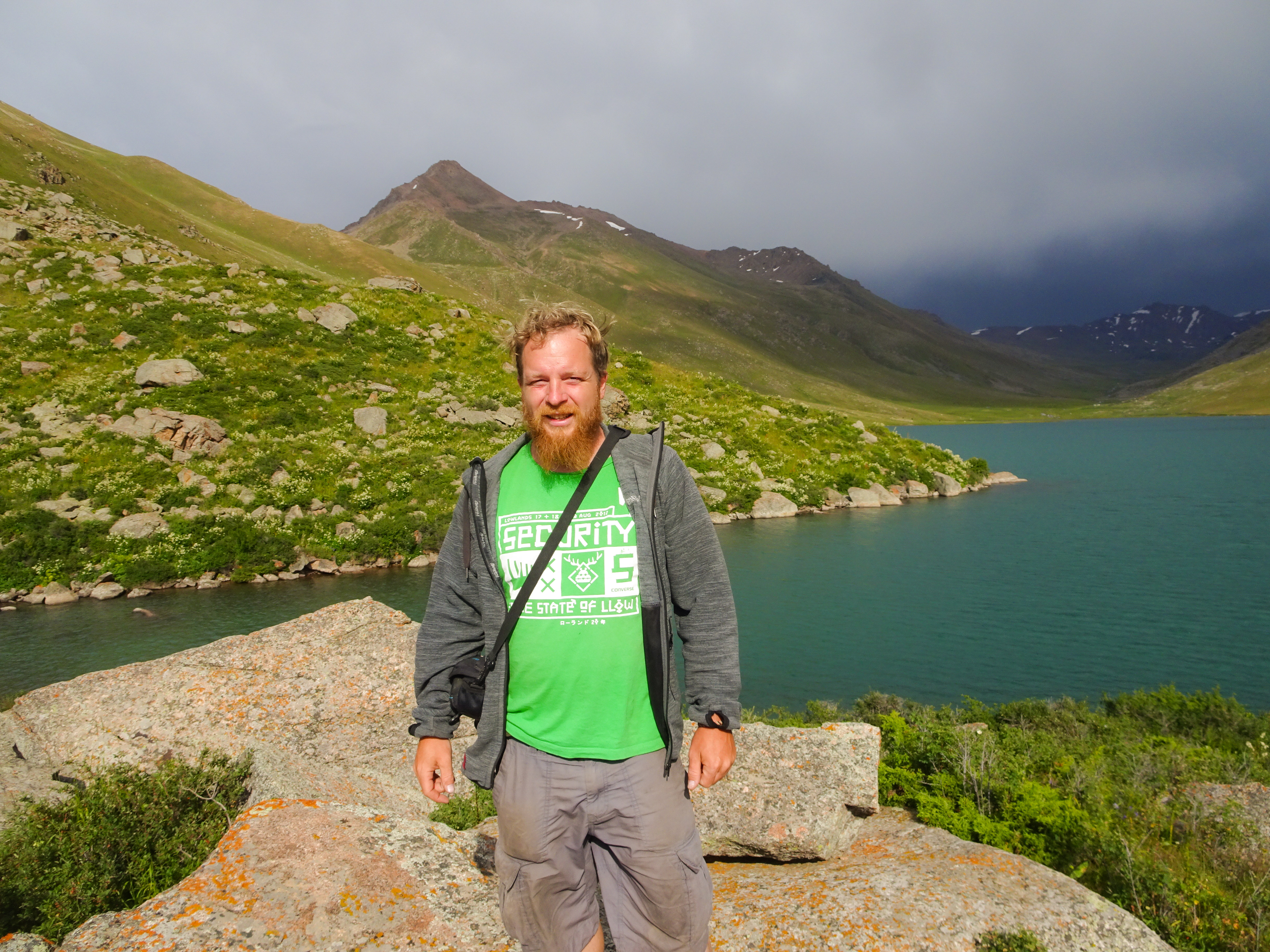 Me at the lake 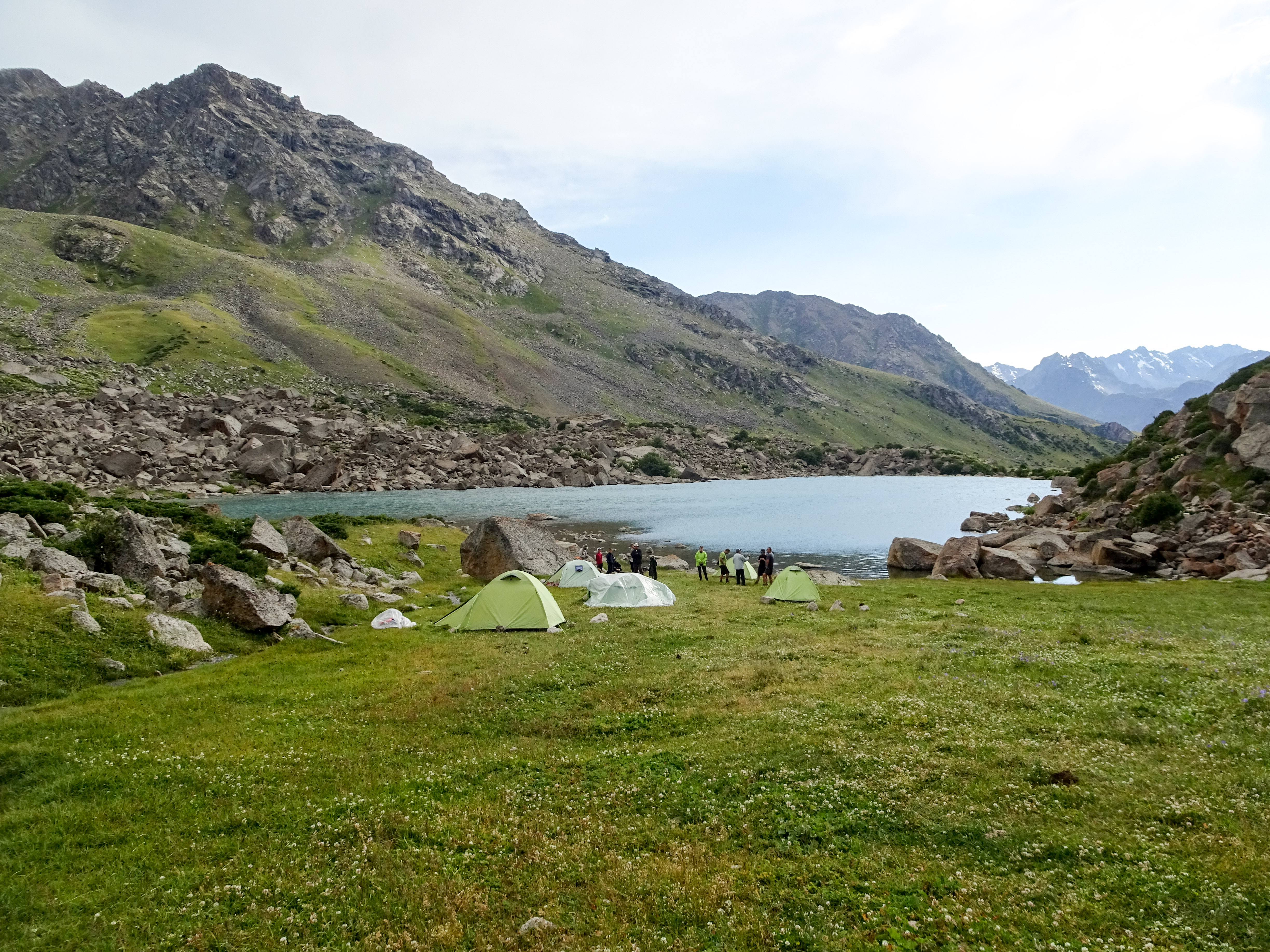 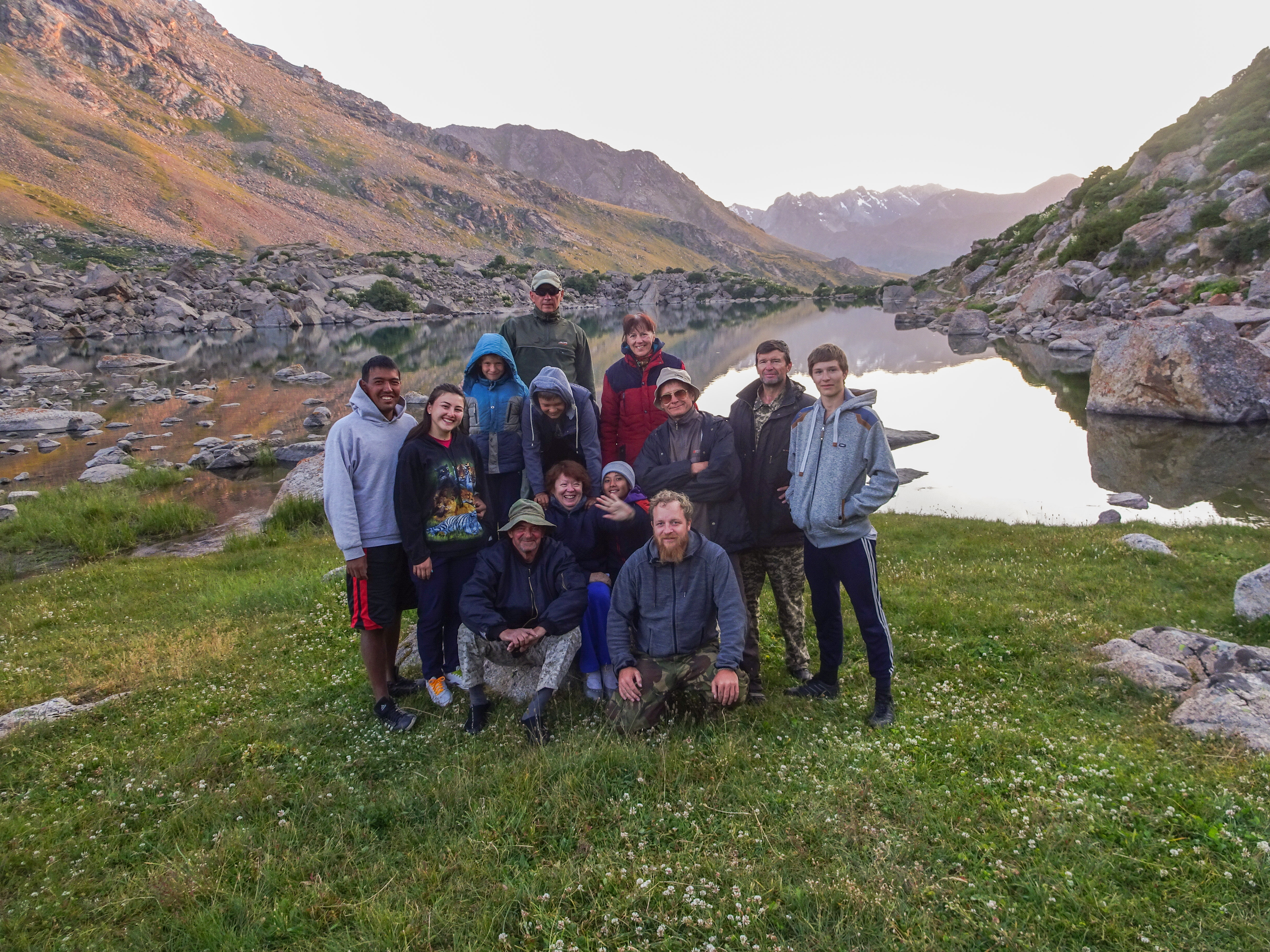 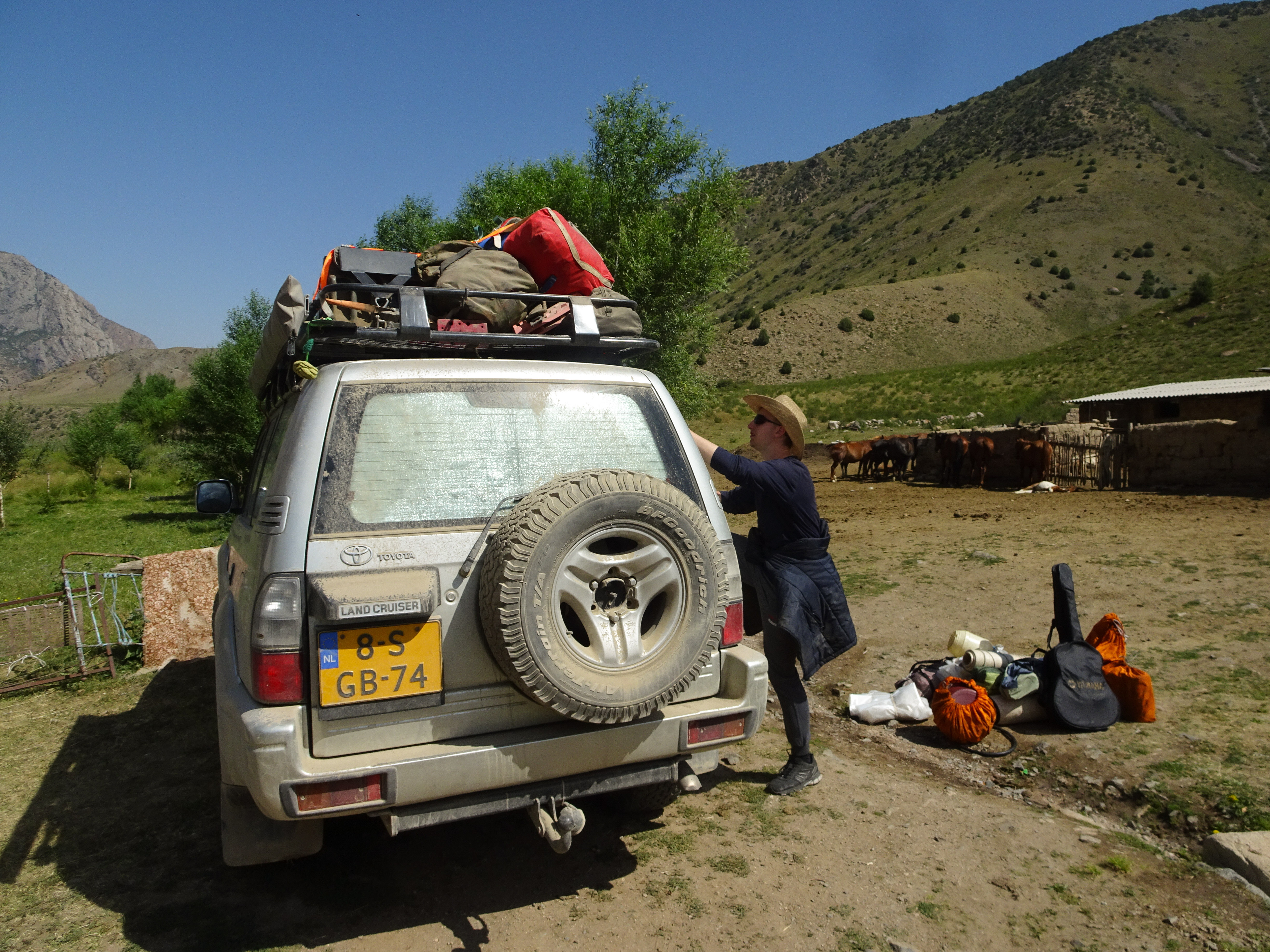 Helping them out a bit 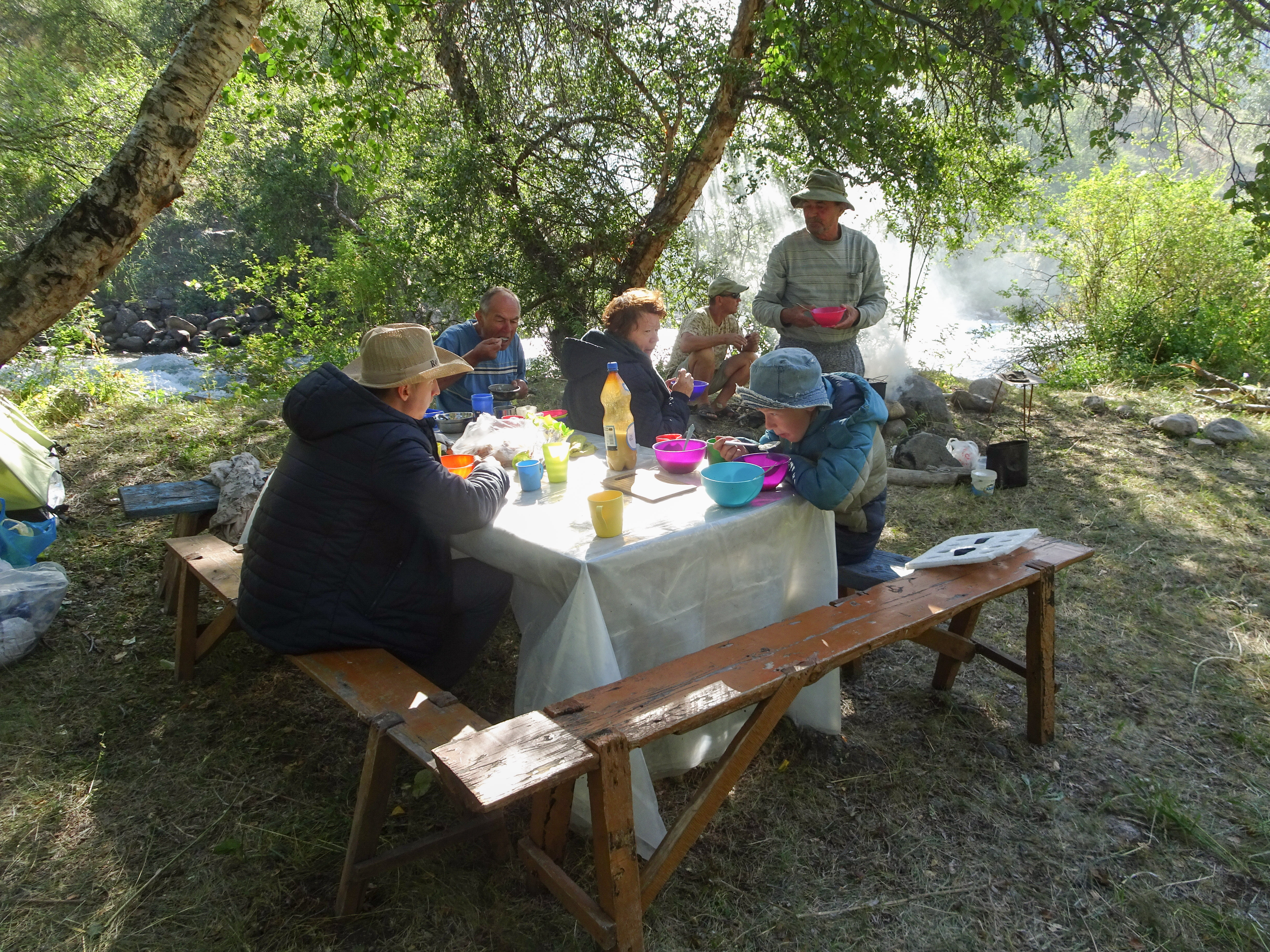 I left in the afternoon towards the north. I passed a huge dam with a massive concrete face of Lenin. Some guy was hitchhiking and I decided to give him a ride. But he turned out to be extremely drunk, and started bragging he was a wrestler. It was hard to get him out of the car so I brought him home, about 5 kilometers in the wrong direction. When he invited me to drink more with him I declined and went looking for yet another end of the road that I found on the map. It was behind a small village, close to the Kazakh border. The whole area was kind of barren, but behind this village I found a nice forrest with good flat spots. It was such a nicely hidden, windless, bugless shaded spot that I stayed for 2 nights to relax, walk around, filter water and read a book.

Bugless means no flies or mosquitoes. But there were some cool dragon flies and beetles. The presence of dragon flies usually means that there are little mosquitoes around. 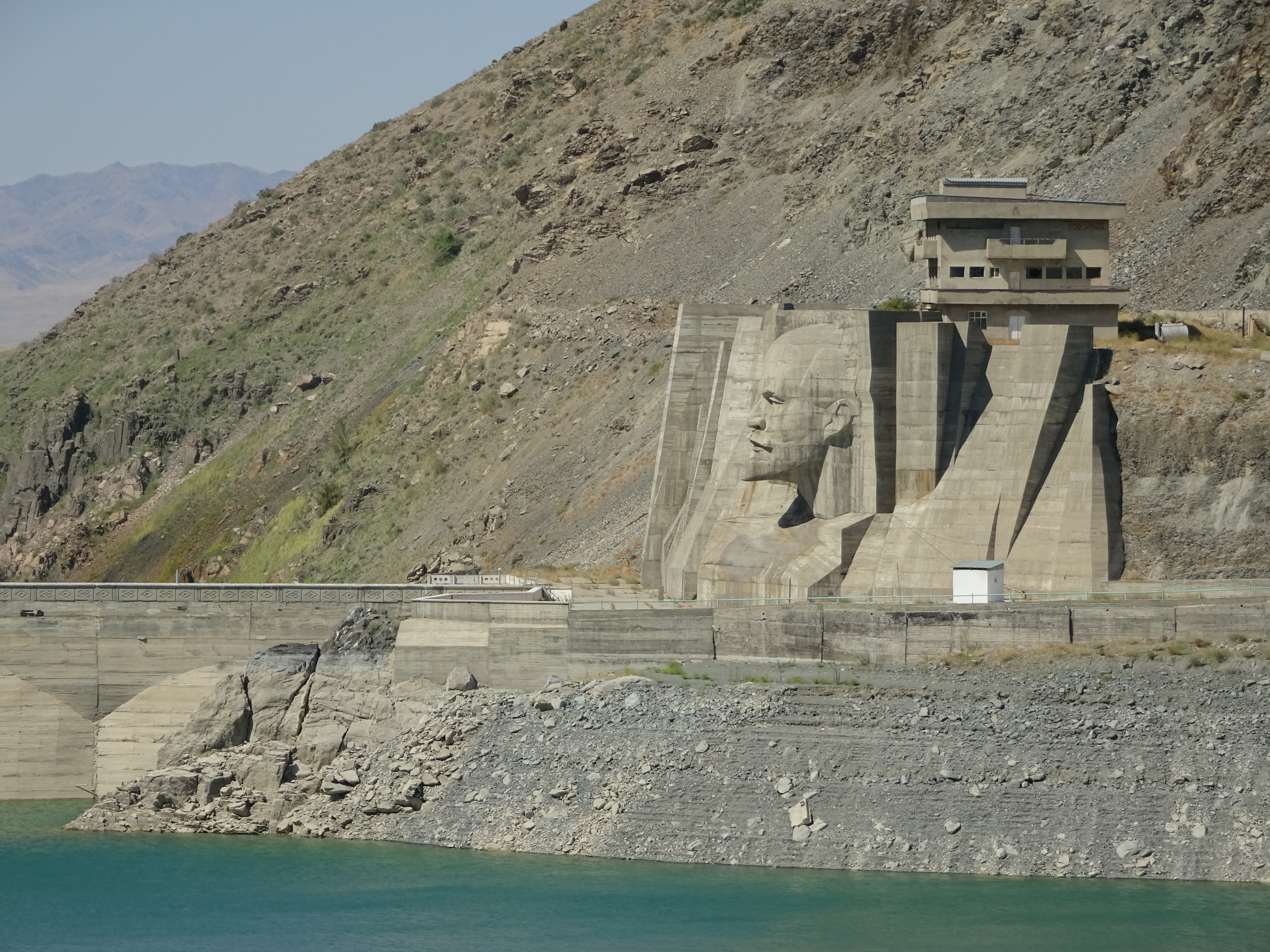 My forest camp in northern Kyrgyzstan 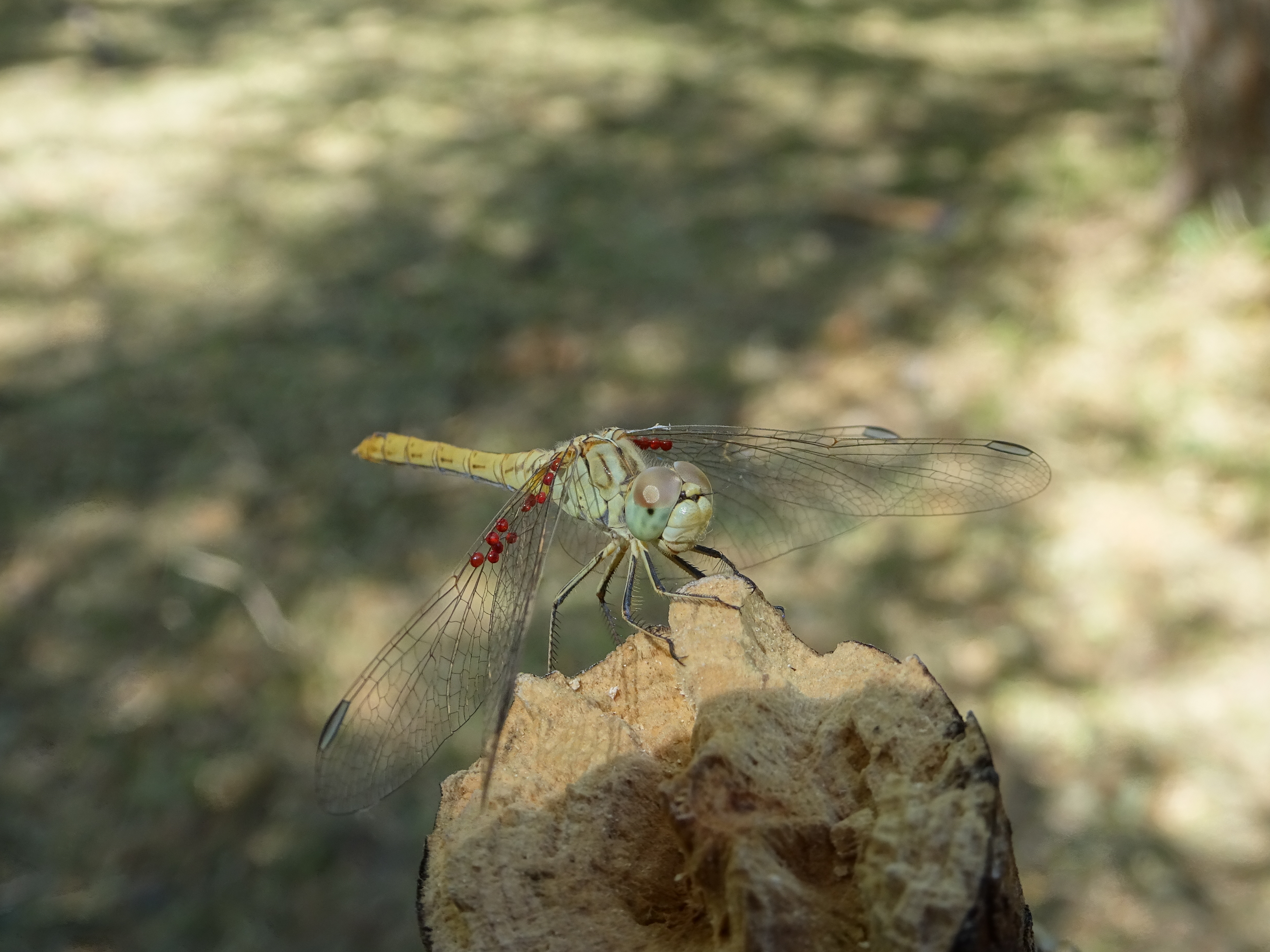 Time to head into Kazachstan! Crossing the border went rather quickly, on a nice and quiet control post. The aim for the day was Taraz, where I planned to arrange insurance, food and maybe spend a night. I found insurance, food and spent a night in a rented flat for about 8 Euros. The next day I started the drive towards Almaty, but because I wouldn’t make it before dark, I set up a camp left of the main road in a field with some trees. A guy on a horse came checking up on me and (I think) asked me if I wanted to stay at his farm. I declined because I had already set up my whole camp and had a relaxed evening with a nice sunset, flocks of birds flying over, a beer and a movie.

View from my tent on the northern Kazakh steppe

From there it was another 100 km or so to Almaty where, after some searching, I found a hostel in the west of town. It was run by 3 guys who almost always playing games in the common room.

This day I picked up Bas form the train station (with a slight hangover from a good night out before, with 2 guys from the hostel). We had some food and went to the hostel to relax. We had to stay there a few days while Brutus was getting repair work done (new lower ball joints). The joints had to be sent from Astana so we had some time to check out town and relax more. We had a good night out with Kirill and Pablo, 2 other travellers from the hostel. Almaty is really a good place for hanging out for a while. It is littered with pubs, clubs, hostels, beer shops, boulevards and nice places to eat. 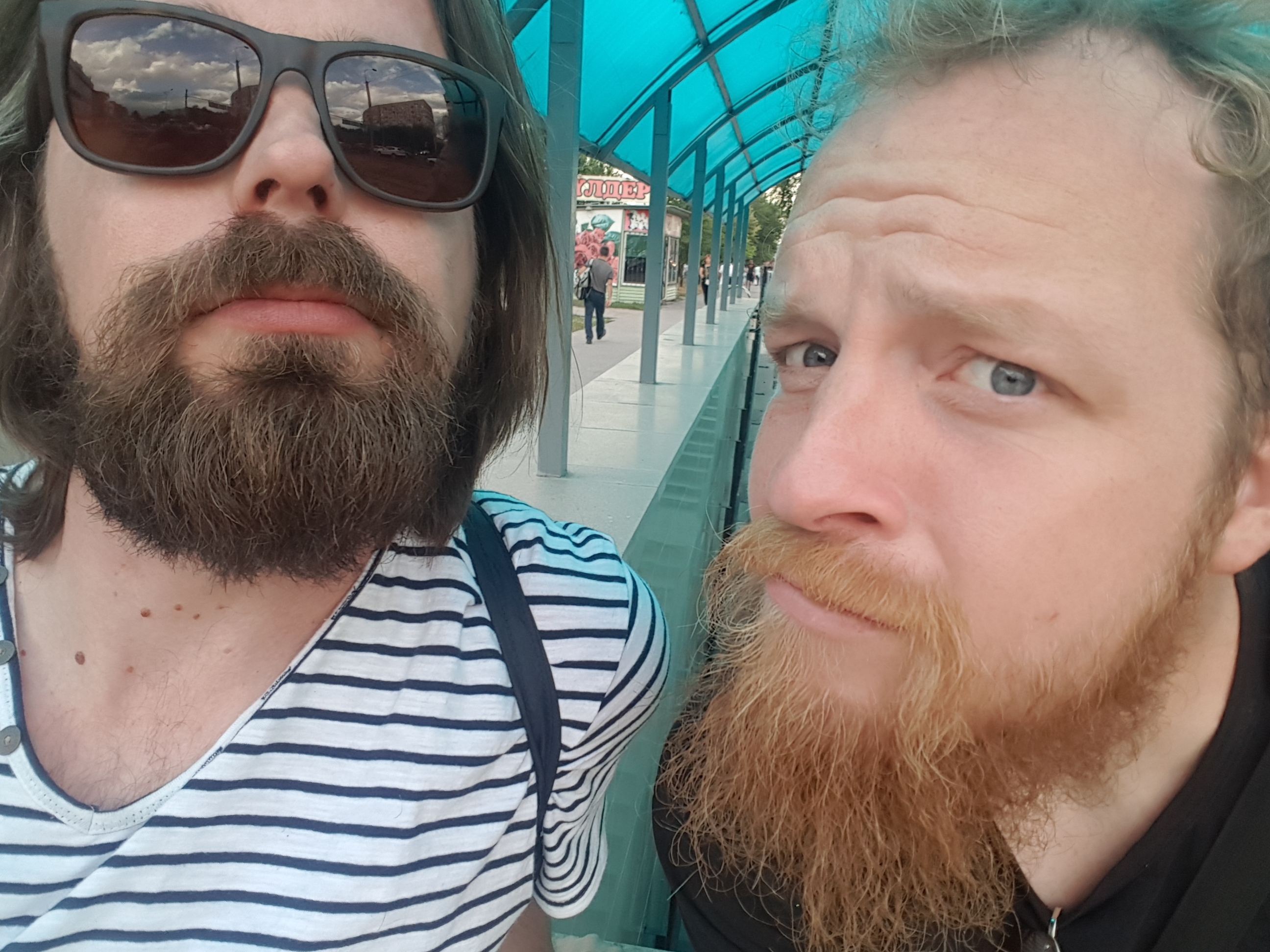 But, when the work was done, it really was time to head out again. So we stocked up on food and drinks, and drove to the south, where we were told there is a beautiful lake. Because it was already dark when we drove out of town, we didn’t get very far, and pitched the tent somewhere on the side of the road, next to a river. 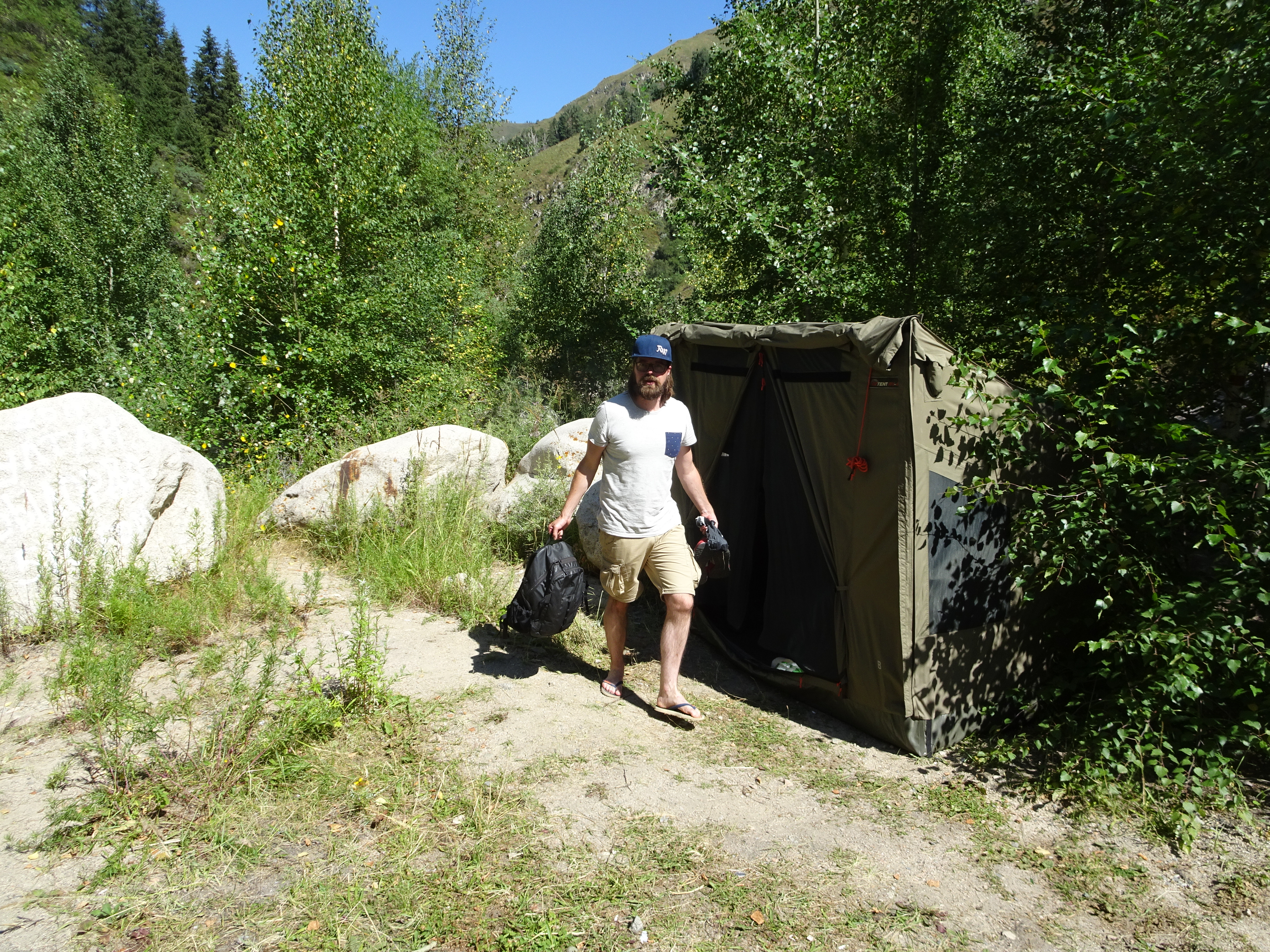