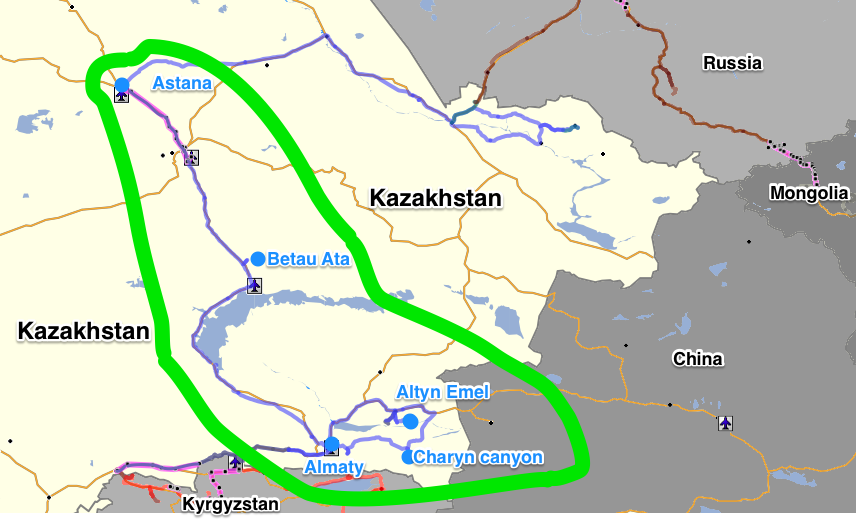 Bas and I woke up in our tent, made breakfast and continued to the little lake, south of Almaty. We took a little walk there among a bunch of other tourists and locals. The lake has a beautiful light blue color and streams ending up in it. Just before we wanted to take a dip, we talked to a woman who told us that wouldn’t be a good idea due to soldiers who wouldn’t approve. So we didn’t. When we drove back towards Almaty, we had to wait a while for road works. There, we talked a bit to Azamat, who was also waiting. When I mentioned that I had trouble with my power steering pump (it was noisy, leaky and made the oil burn), he told me that he had some connections and idea’s, gave me his number and started looking online for second hand pumps. For the night we decided to go to a hostel that is on iOverlander. It was also a climbing hall. We played some ping pong, had a beer and went to bed. The next day, Azamat had found found a guy with a pump, and with some searching and driving around, we found the place. Near the place, we found a workshop with a guy that spoke good English, and they fitted the pump in about an hour while we had lunch. pump, 40 euros, work, about 10. Not bad for what would have cost 800 euros at the Toyota garage. After that, we had lunch with Azamat and went on our way towards the east, where we planned to see a lake, a canyon, a dune, and colorful mountains. We arrived at the lake around dinner time and drove around a bit to find a nice camp spot between the trees. We had hot noodles and made a nice camp fire. Making a fire is always worth it, even if it feels like a drag to set it all up.

This excellent shot by Bas

A watchtower on the way to the lake

When we woke up, we were full of energy to continue. We took a dip in the lake, which was gruesomely cold and therefor hilarious. The next destination was Charyn canyon, about 180 km further east. The way there was interesting. Old towns on route, mountains to the right, meadows to the left. The road to the canyon was good ol’ fashion corrugation terror. We payed the entrance fee to be allowed to drive into the canyon, which was totally worth it. Driving through was beautiful. We met some Dutch people walking the route. After a few kilometers there was a yurt camp where we put up the tent. It was right next to a river. The sunset was epic and we made a pretty good sausage-curry-potato-rice dish, which we ate accompanied by some other guests that were camping out there. The night sky was amazing.

Dip in a friggin cold lake

A strange water contraption we found on the way

Driving through the Charyn canyon

Camp in the canyon

Tight fit driving under some rocks

After we packed up the next day we took a dip in the river, which was strangely warmer (less freezing) than the lake of the previous day. There is also a path leading along the canyon. When we went there the wind had picked up a lot which created a very special atmosphere. I really like wind and somehow this was the first time I missed home, where wind is frequent. The whole way to near the entrance of Altyn Emel national park it was very windy. We found a patch of trees with less wind where we set up camp. The wind picked up even more after that. About 20 meters away a tree broke off and fell to the ground. leaves and branches were everywhere, but the place we chose held up nicely as a sheltered spot. That evening we watched a movie in the tent and were disturbed by the owner of the house nearby. There was some miscommunication, but in the end we think he was just showing us his building project. We were allowed to stay.

Camels in the wind

Our safe spot from the wind

After an unfruitful attempt to start the car the next morning, we walked around to look for locals with a vehicle. We found 2 guys with a Lada, eager to help. After we managed to start the car, we had a shot of vodka, exchanged vodka bottles (cheap for less cheap), and went on our way to the national park office. There, we obtained our permits to enter the park. We found a local mini market and stocked up for a 2 day stay. At the entrance there were 3 other cars waiting to enter. We followed them to the first camp ground, close to the “singing dune”. After setting up the tent, we went with the same group to the singing dune, which was silent because it had been raining. We did manage to get some sounds from it when we jumped into the sand though. Otherwise the surroundings also happens to be stunning, so no worries. They told us to drive back before dark with the lights off to not disturb the animals. That evening we hung out around a camp fire with the people from the 3 cars, some good food, beers and vodka. An excellent evening.

The other teams dog, watching from the dune

To get to the colorful mountains (Katautau and Aktau), we had to drive out of the park, and sort of back in again. A 50 km drive, past a 700 year old willow tree, where we set up our tent. The mountains are absolutely stunning, and totally worth the hellish road to get there. It looks like you’re walking around in a box of Indian herbs. That evening we made the most epic camp fire every, right next to the 700 year old willow tree. We must have put on 50 kilos of wood which we found in the surroundings. We left the willow intact.

But where to go??

Brutus in front of a rock, as you can probably see

These mountains are seasoned

Curry and cinnamon and some Italian herbs, with some pepper in the corner

An ever growing camp fire

Of course, we woke up kind of groggy so when we had cleaned up our camp, we looked up the hot (or lukewarm) spring and had an excellent shower. The water came from a pipe, running through a little building. Apparently they can use this water to predict earthquakes based on the content of some minerals. Whatever. Most important is that it wakes you up after a night of fire and alcohol. Because I had forgotten the spare key at the garage where they installed the power steering pump, we had to drive to Almaty again. Just a few kilometers extra. The pick up went smooth, except for the little driving-over-the-straight-line-right-in-front-of-a-cop-incident. Iwe: “Do you see any police?”. Bas: “no”. The copper thought he had Christmas, his birthday and Chanuka at once because he tried to pull $300 out of me. We just acted stupid for an hour, after which he kind of grudgingly let us go. Good thing because a $100 bribe is common for such an offense. Later, and we stocked up for the trip towards Astana as well. 50 kilometers north of Almaty we drove to the left into the meadows and, after some searching, found a really great camp spot next to a tree line. Some local farmers came to say hi in the morning.

We were moving into the large distance area’s of the world. Endless yellow grass area’s and dusty steppes followed for many kilometers north. So we drove about 360 kilometers to the massive lake Balkhash. The area we chose on the map was kind of polluted and barren, but after trying a few different spots, we found a garbage, dust free patch next to the lake. And there was even some wildlife around while the sun moved under the horizon in a dramatic manner. Pancakes for dinner! At first it was all quite bug free, but the mosquitoes really came out after sunset and we had to hide in the tent quite early. Movie time!

This weirdo, eating his fly

We took it easy the next day, bust still drove for about 300 km, to a national park with a cave/hot spring that we were not able to find on our walkabout into the park. But we did find another great camp spot again, near some interesting rock formations. We made a fire that evening with some wood that Bas stumbled upon. There was also vodka and good stories if I remember correctly

Our camp near Betau Ata

The next day we continued towards Astana. But when we pulled in to get some food at the side of the road, we heard a *clunk*-sound from under the car. And when we wanted to leave, the *clunk*-sound happened a few more times. To me, it really sounded like the rear axle had fucked up. Metal shards in the axle that were being crunched as the gears were turning. When looking and listening under the car, we weren’t able to see the problem so the only thin was to ask someone for the phone number of a wrecker. But eventually we asked Azamat if he could help us out remotely. An hour later there was a wrecker with his truck present. He pulled Brutus on the back and brought us to a hostel in Karaganda, 30 km down the road. The next day he would take us to a garage. Total cost, 50 dollars or so. The hostel was relaxed and clean.

Not a pretty sight

As promised, the wrecker was there at 10 in the morning to take us to a garage. But when we were there, we couldn’t reproduce the sound… After trying a few times, we decided to try and drive off. But after 1 or 2 kilometers, the sound began again. And again I looked under Bruut while Bas was moving it sideways violently and noticed that a stabilizer bar had snapped off and was hitting metal once in a while. So we drove back to the garage where we showed them the problem. They ordered an Toyota OEM stabilizer bar within the hour while we were being showed around town by an interested local. When they had installed it and also pointed me to some other potential problems with the lower ball joints and control arms, the main guy told me that it was his gift to me and my project. I was flabbergasted and amazed by his generosity. After thanking the guys whole heartedly, we drove off with the best mood possible, and an enforced faith in humanity. The final 200 km to Astana was smooth and comfortable. The Nomad 4X4 hostel looked fine, with some other overlander guests to make it interesting. Good nights out and some more car repairs. I start forgetting the details of all the damage

That’s supposed to fit there

World Exposition day! With the frankly shame-inducing Dutch pavilion, that somehow for 4th price or whatever… But the spherical Kazakh pavilion was totally amazing and huge! I didn’t know what to expect there, but it was all great.

Looking down on a glass bridge in the sphere

One thought on “Kazakhstan Part I (Almaty – Astana)”