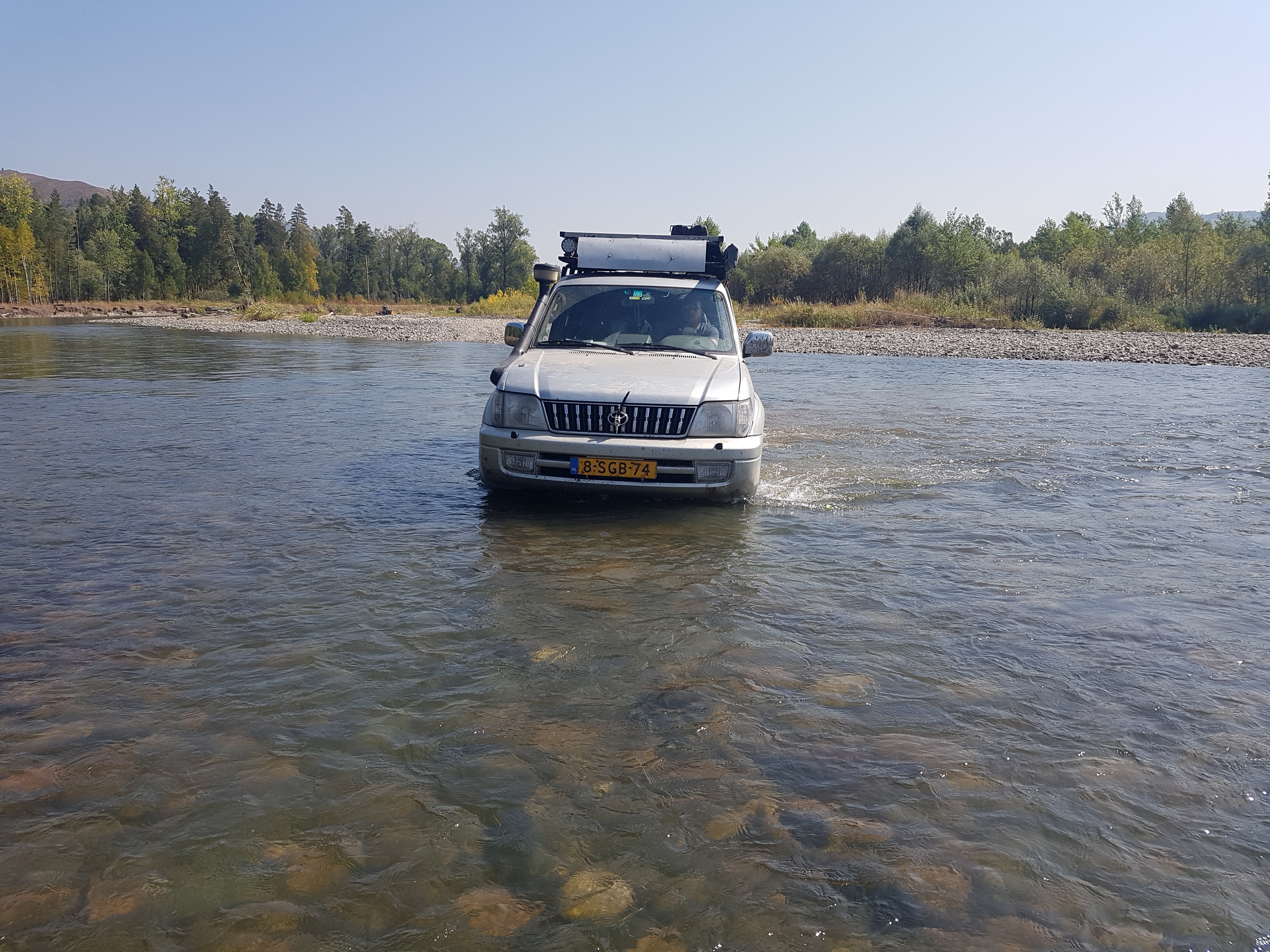 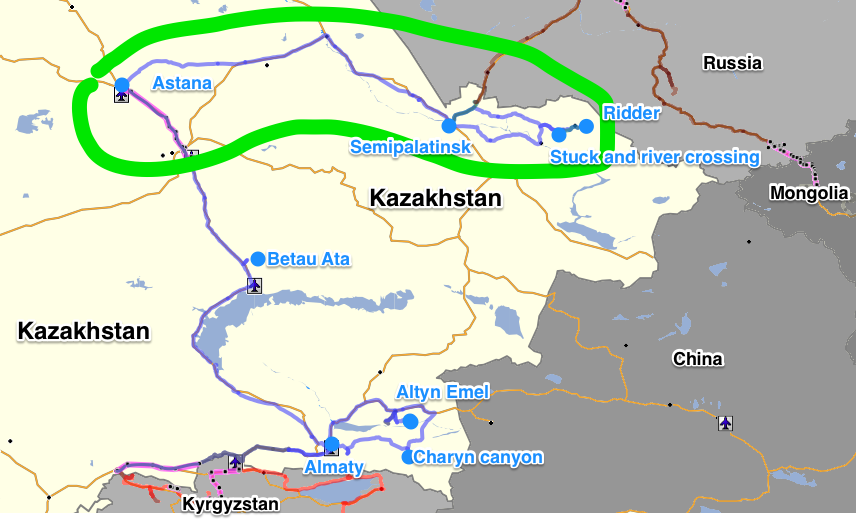 We had a good time in Astana, but it was time to get a move on again. Bas had booked a train from Semipalatinsk back to Astana to fly home from there. We found a place on the map called Ridder which we found funny and eastern enough to be feasible for Bas to be able to make it back. The road to the east was under construction, so about 80% of the time we drove on a path next to the road. Pretty tiring stuff but nice surroundings. The dusty yellowness slowly turned much more green and less flat and eventually green trees and rock formations. Our first camp was on the steppe, just over a slight slope so that people from all sides couldn’t see us. 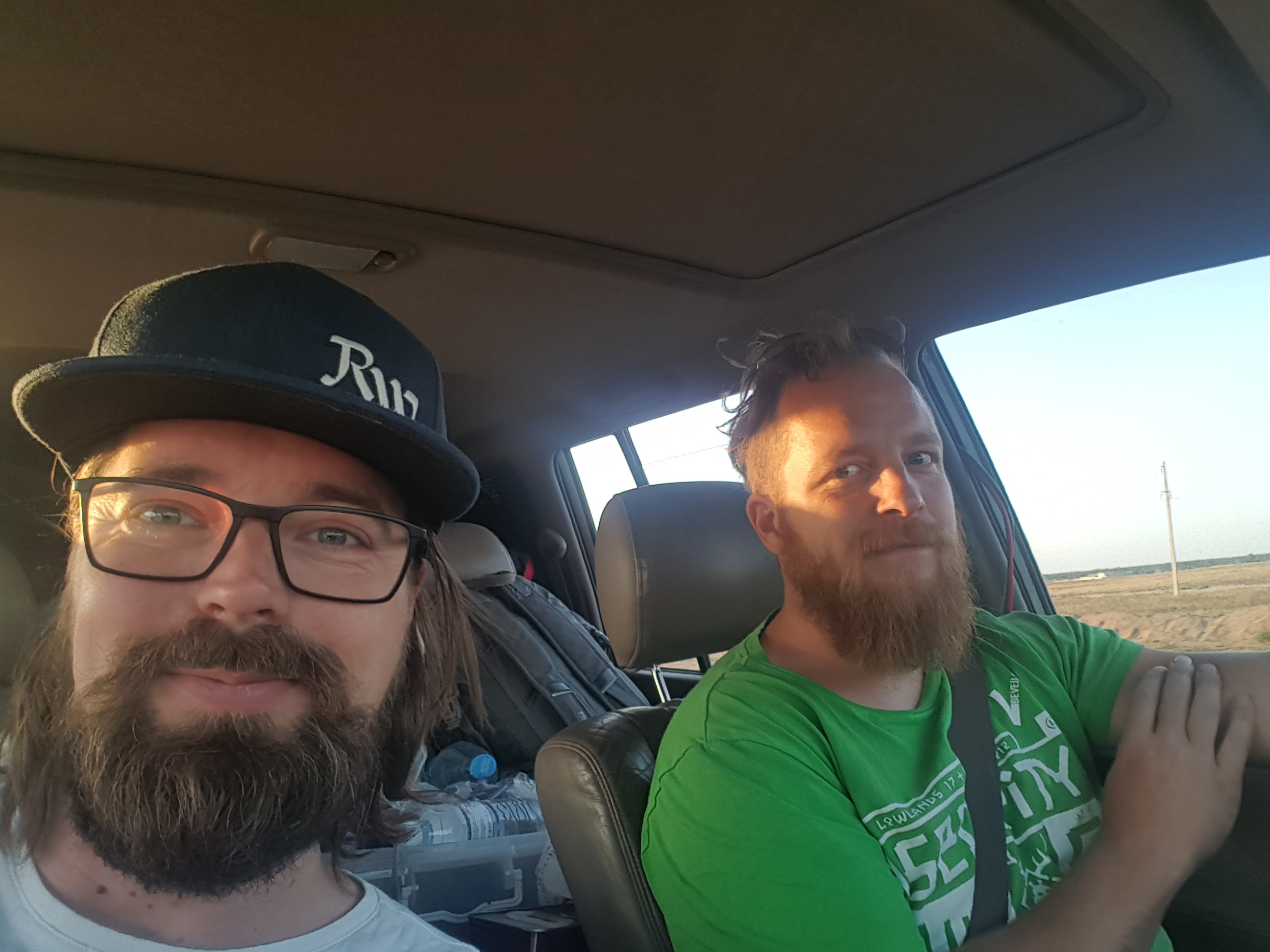 Back on the road 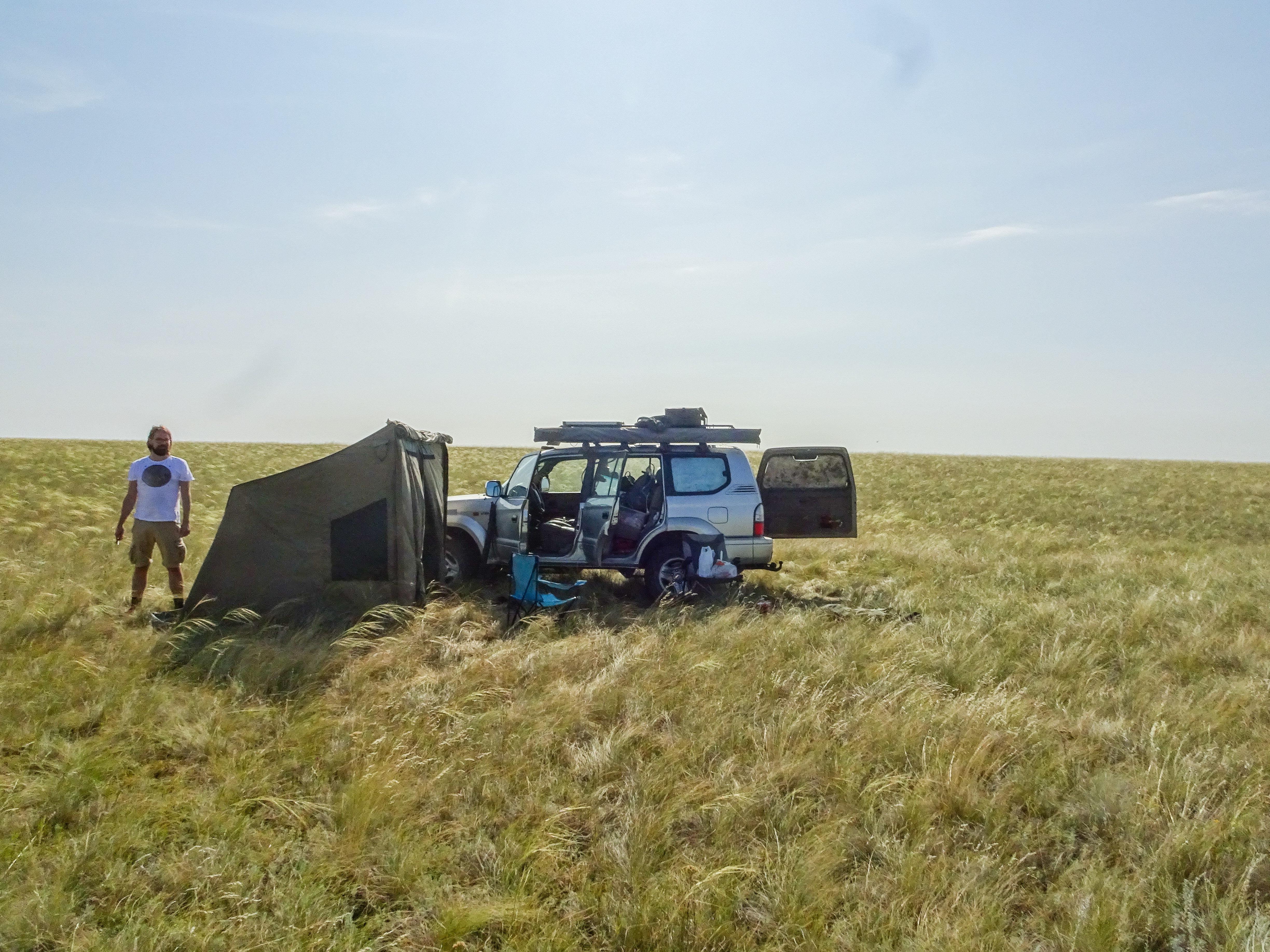 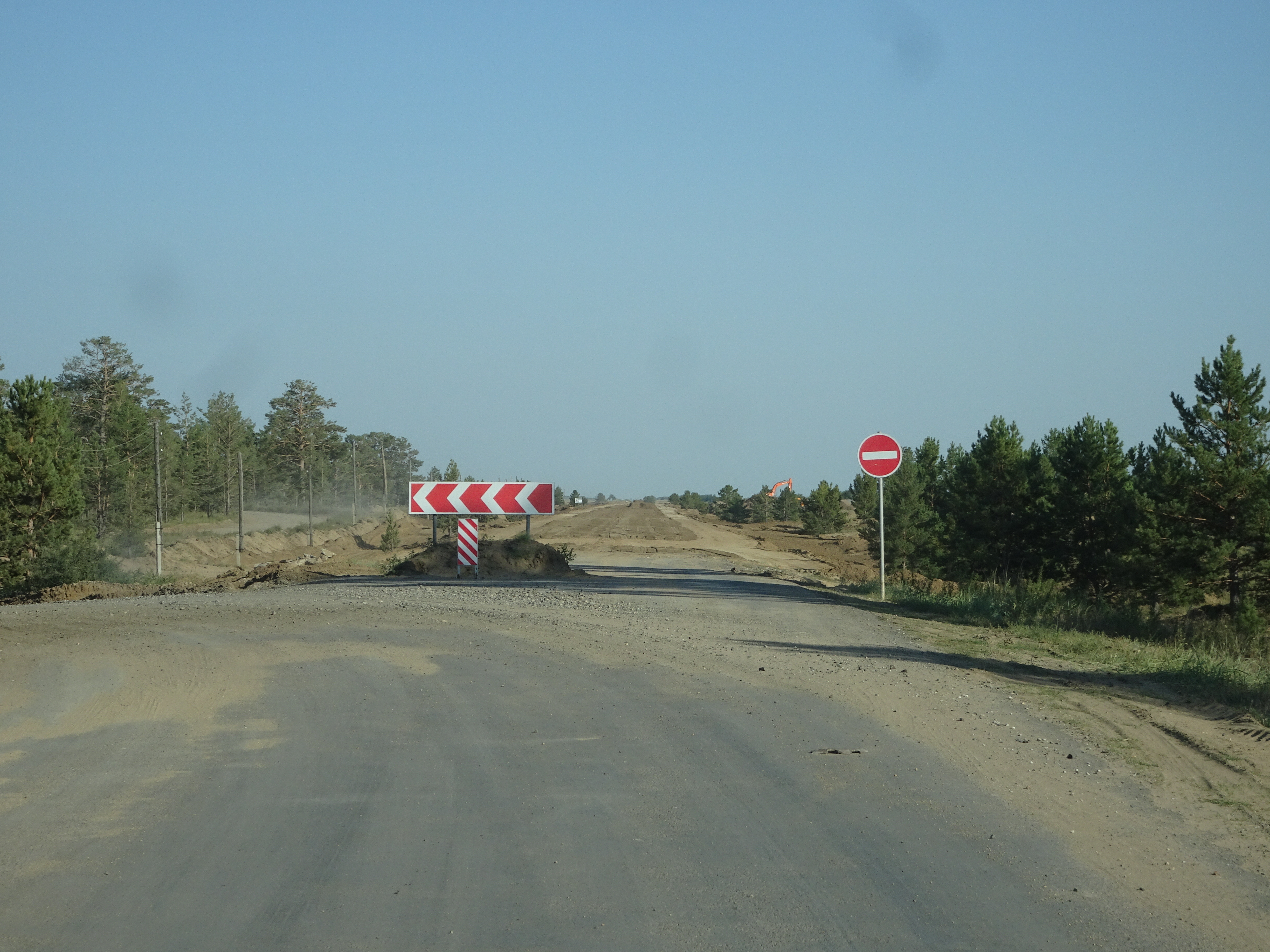 A looooot of this 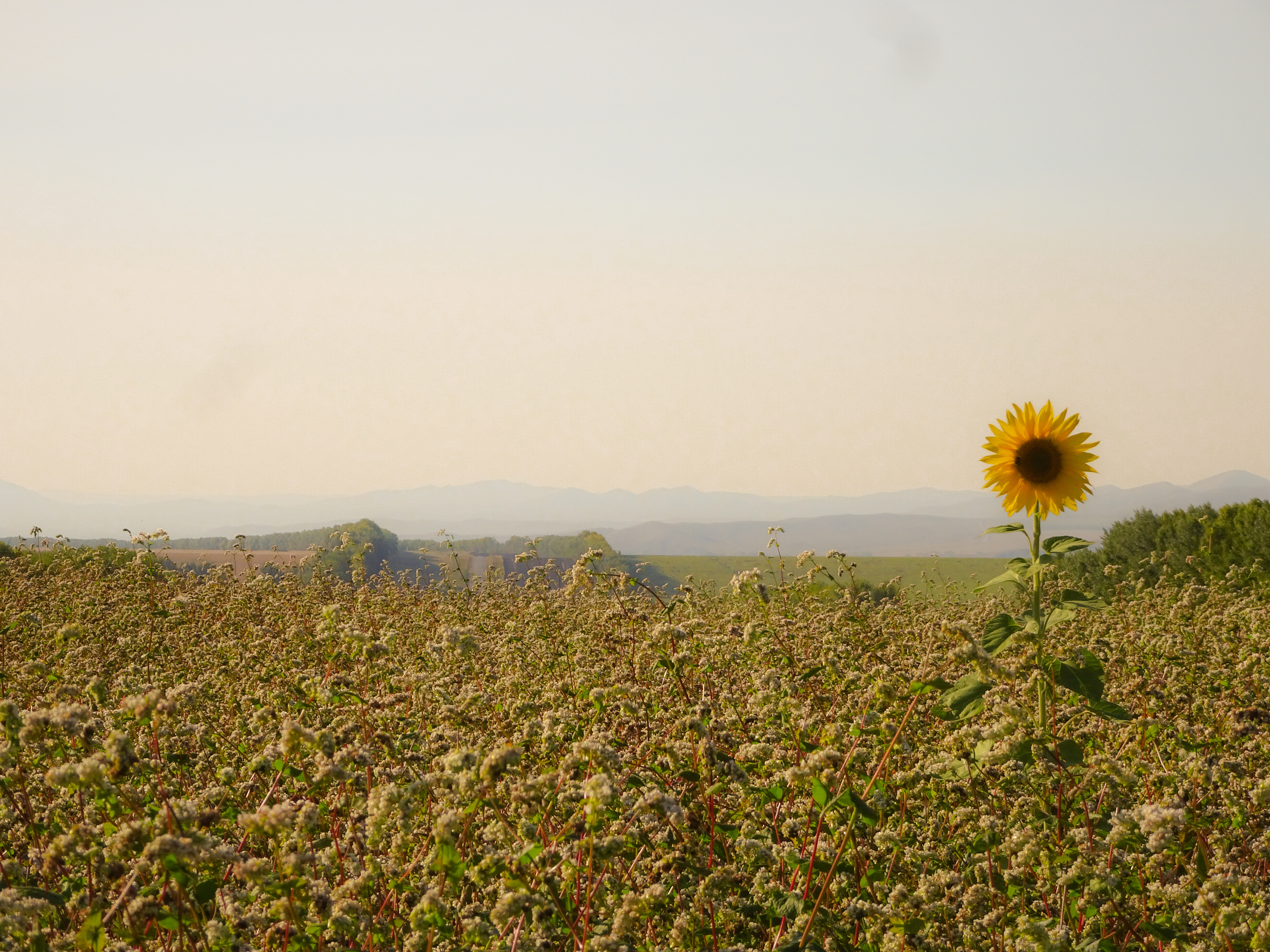 When we entered Ridder, after a 2 day drive, we didn’t like it that much and searched around a bit for a place to camp. We filled up water at a natural source and drove up, into the hills. It was really hard to find a flat spot on the slope, but eventually we found an irregularity in the shape of the tent. We were tired, but luckily still made the choice to start a search for firewood. And we found a nice amount to make a nice sizable fire with. Comfort! 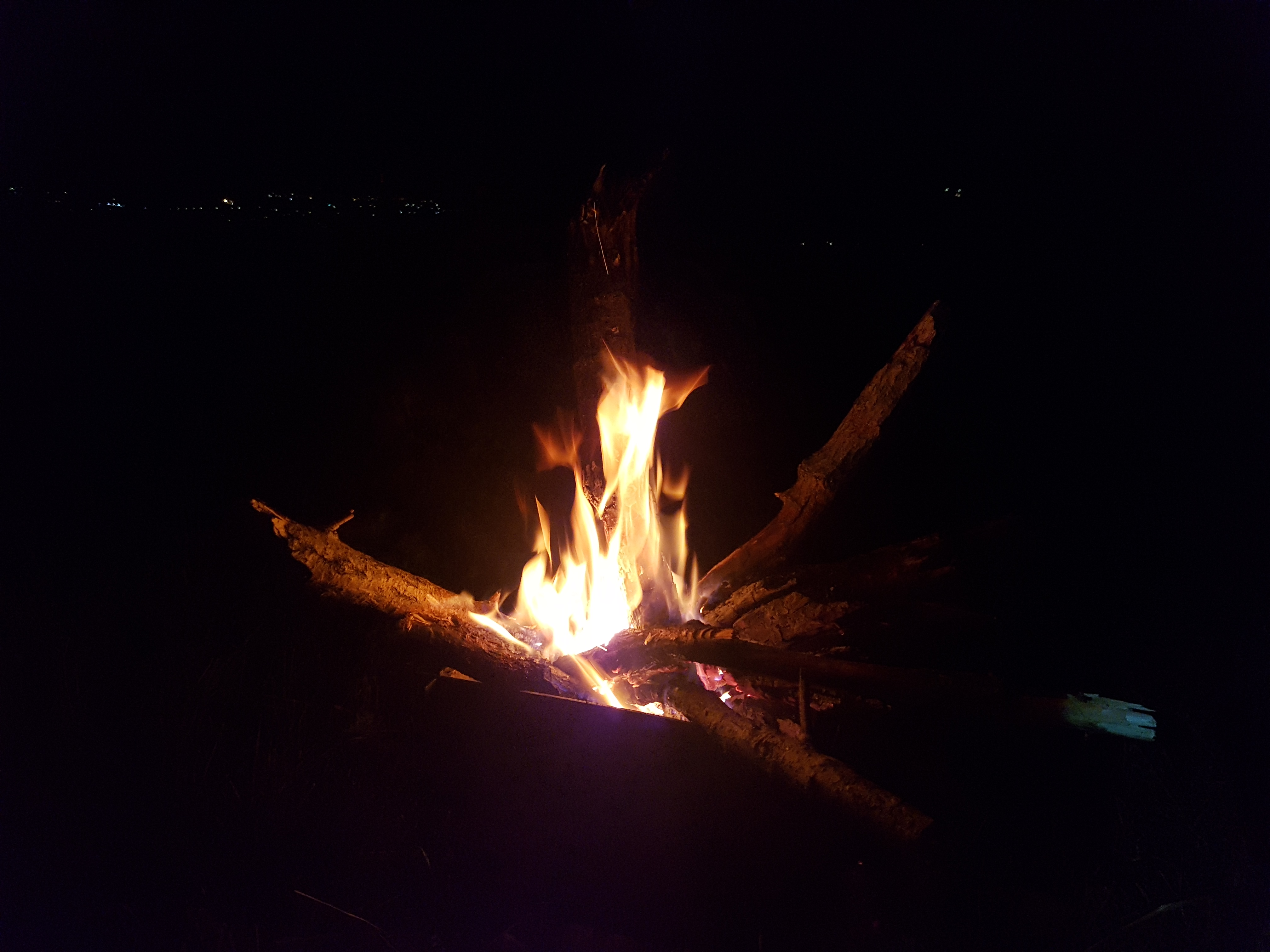 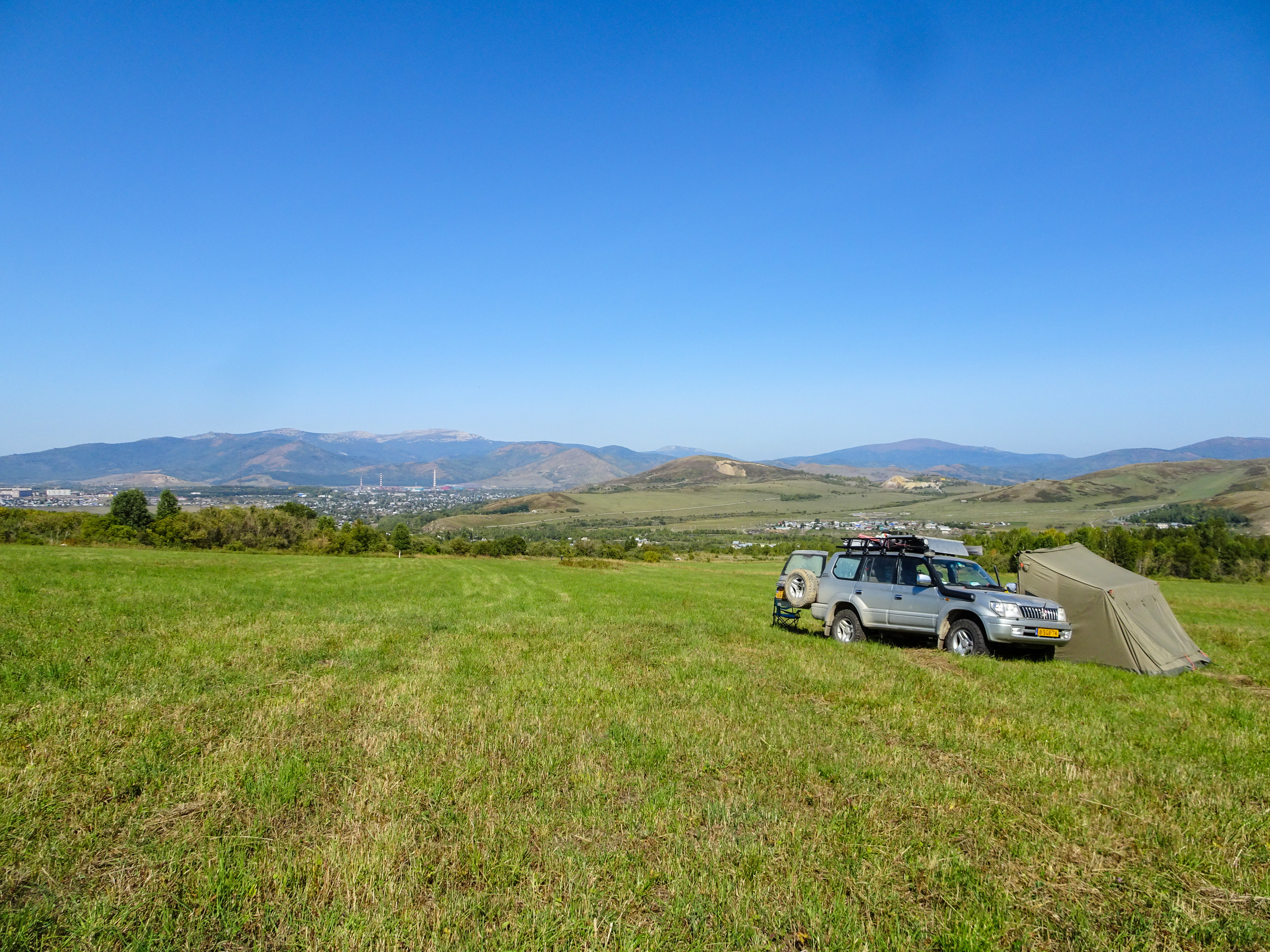 The next morning we drove back into Ridder to find a place to eat, but were not able to find something open, or suitable. So we drove on towards Semipalatinsk. On the way we found a “camping” on the map. It turned out to be a resort of some kind, with a restaurant which was very hard to find, even with directions from the reception lady. But we found it and asked for a lunch. We got a ton of food. Soup, meat balls, Mashed potatoes, bread, salad, pancakes, kompot and tea. Everything for 2100 Tenge (which is about 5 EUR). 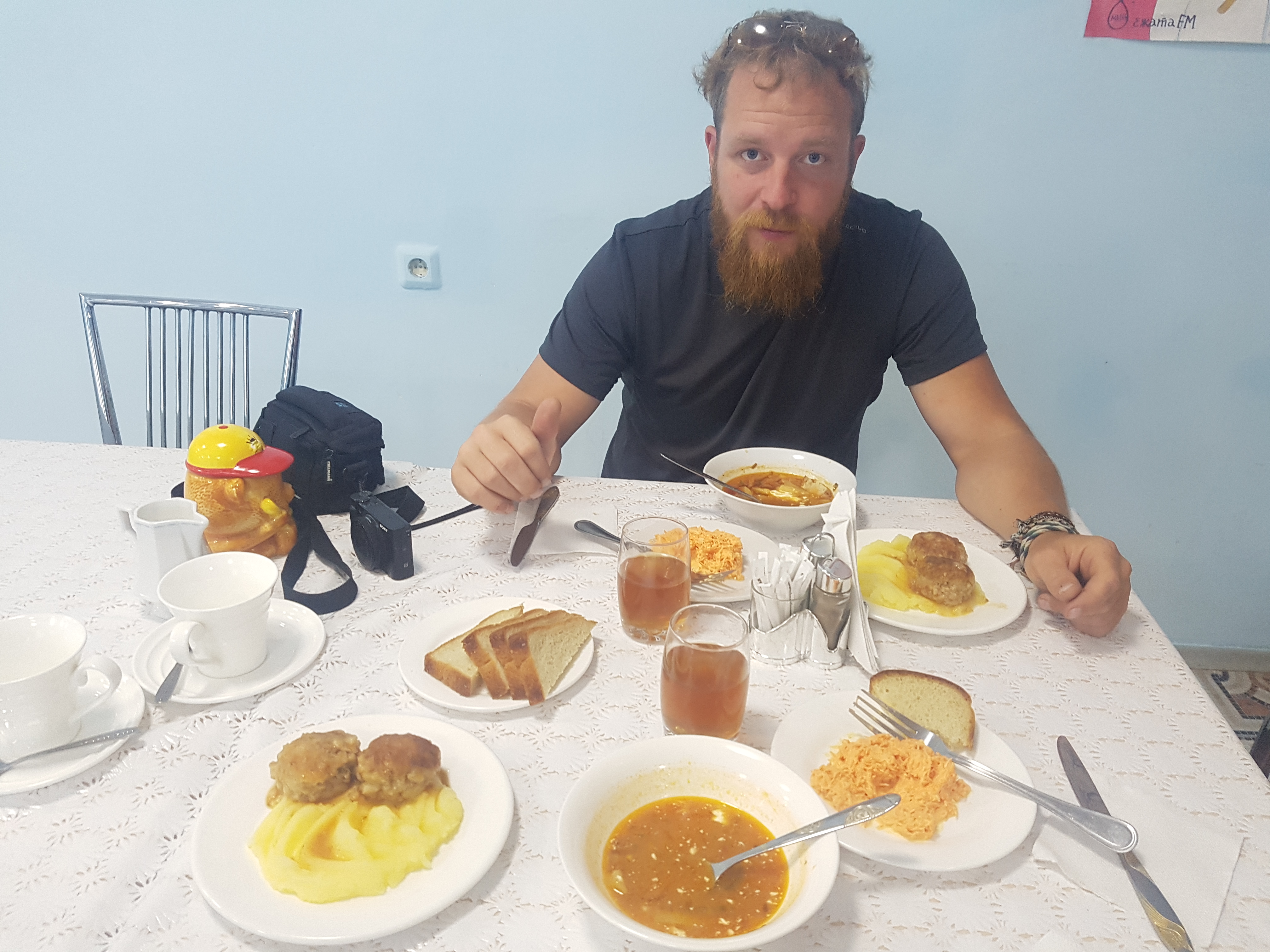 Absolutely stuffed, we went back on the road, looking for some off road action, which we found. We drove left and ended up in a forest. We looked for places to camp, but weren’t able to find cosy spots. So we continued for a while, taking different routes, eventually ending up on a logging path. After we passed some loggers, I managed to get the car stuck in a deep muddy tire track. We took a while to get out, blowing the front tire in the process. Tip: don’t use the trax plates upside down. The plastic protrusions are too large. Eventually Bas managed to wiggle the trax plates under the front wheels, and with engaging the center differential lock we got out. Then we had to replace the wheel, which was as little difficult on uneven terrain, with a half broken jack. But after some time, digging a hole for the jack, and positioning it under the control arm, it worked out. The path up to where we got stuck was bad, and there were no good places to camp. But right after the first corner there was a beautiful flat area surrounded by multi colored trees where we happily set up camp and watched a movie in the tent. 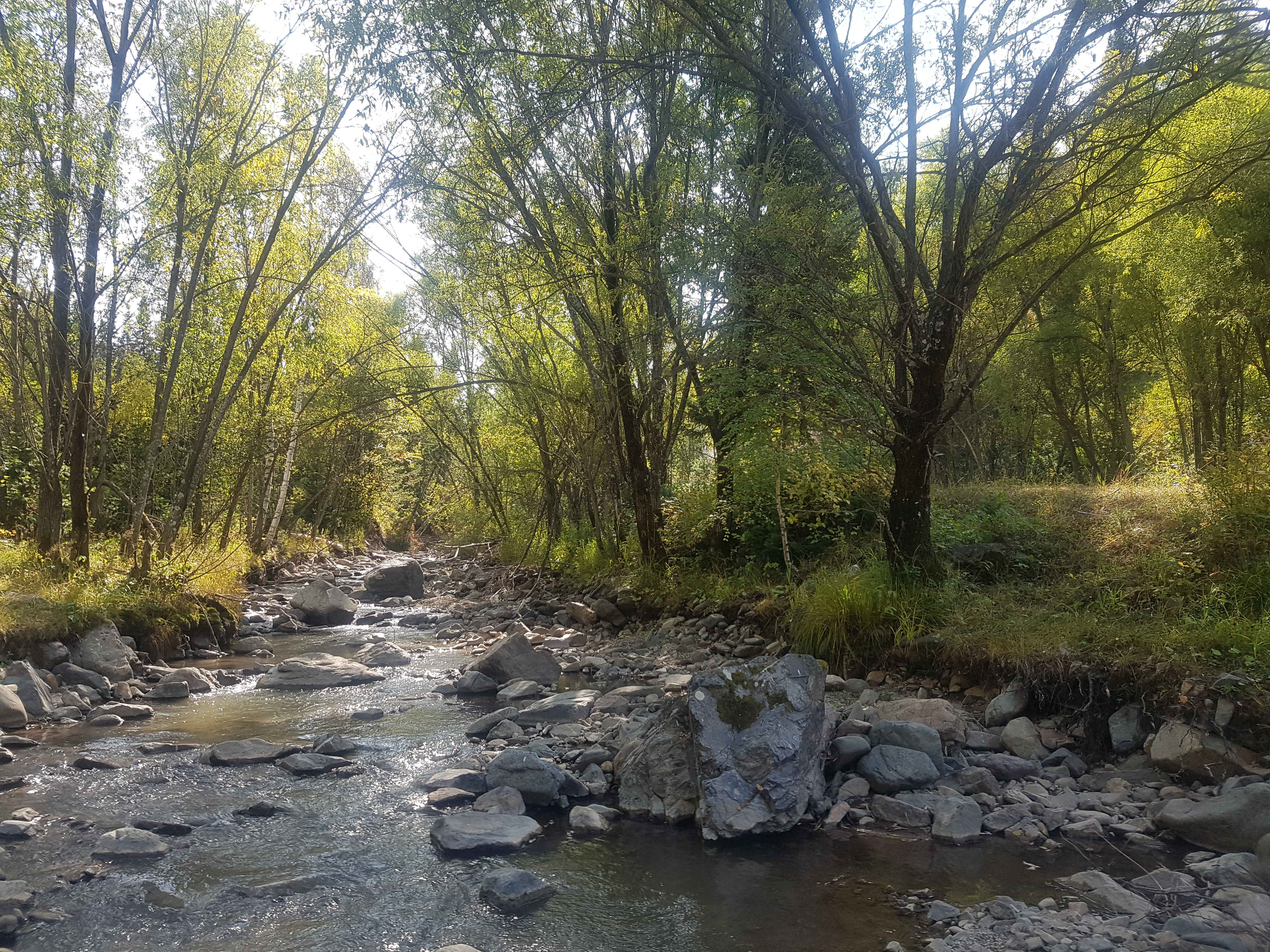 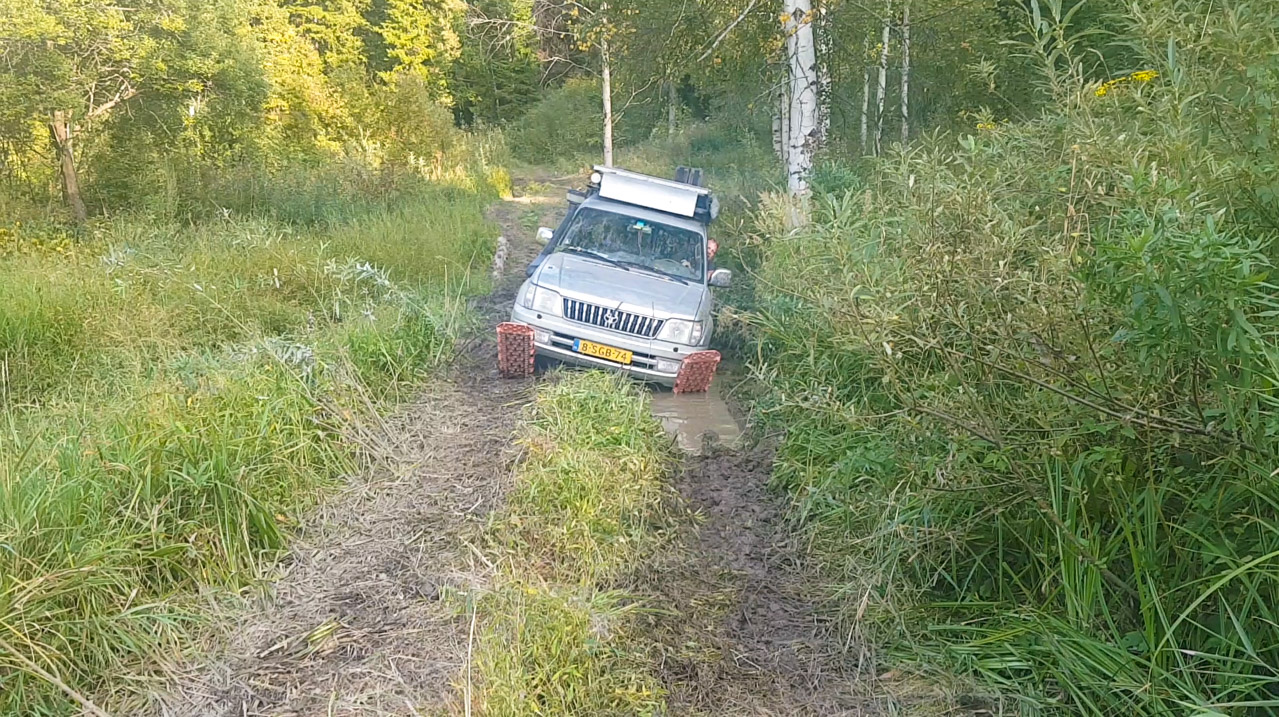 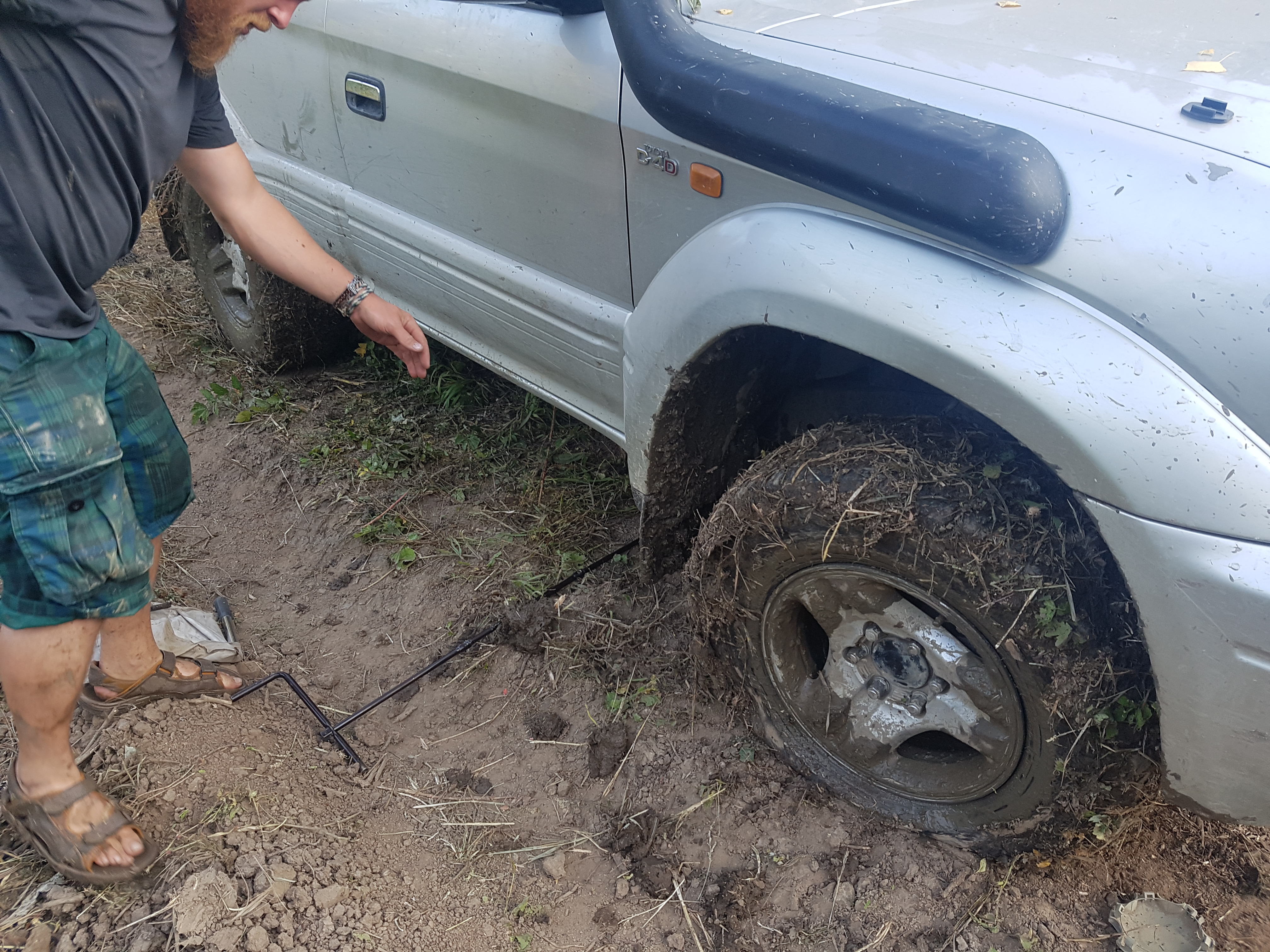 Got out with a blown tire 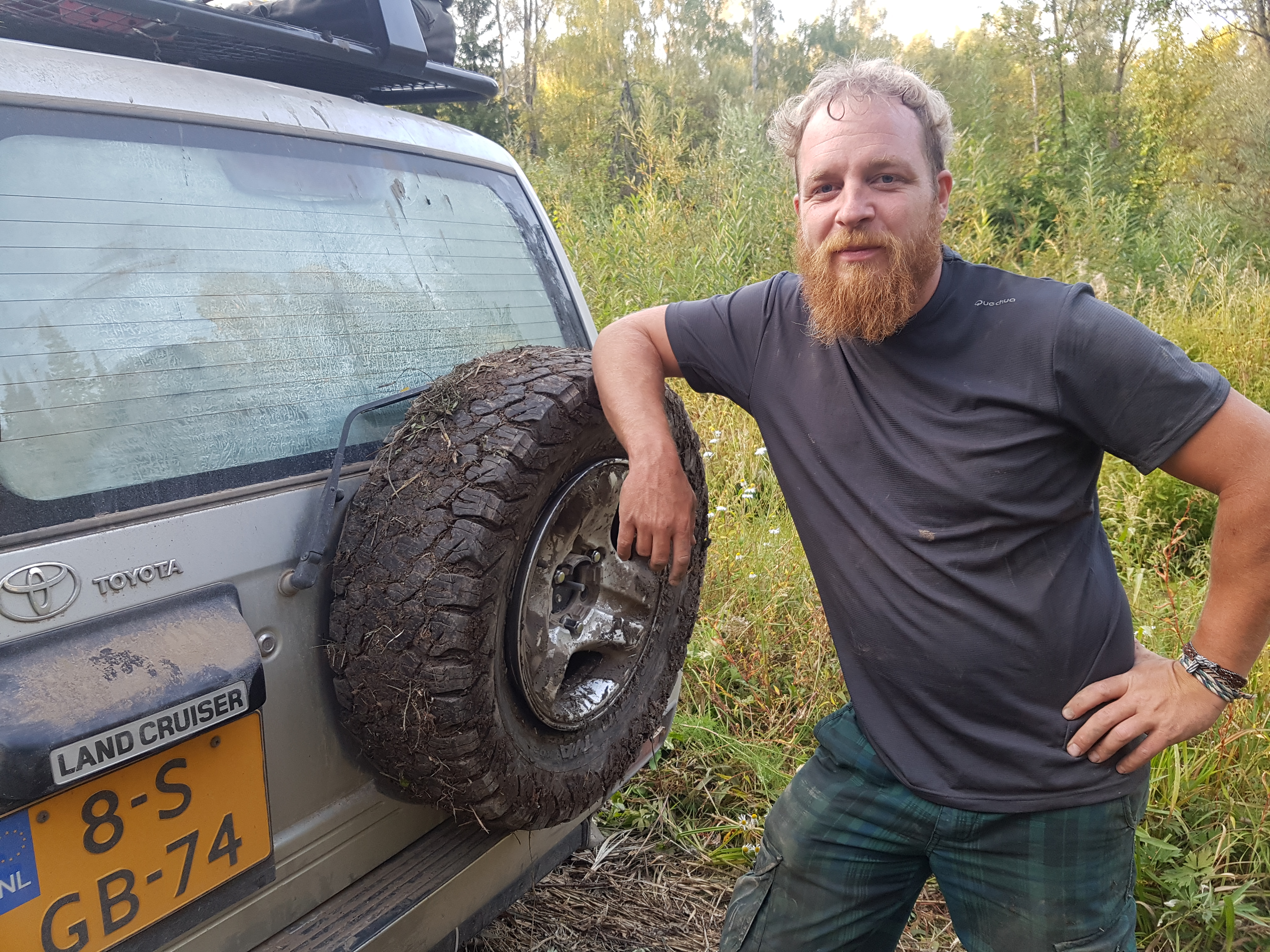 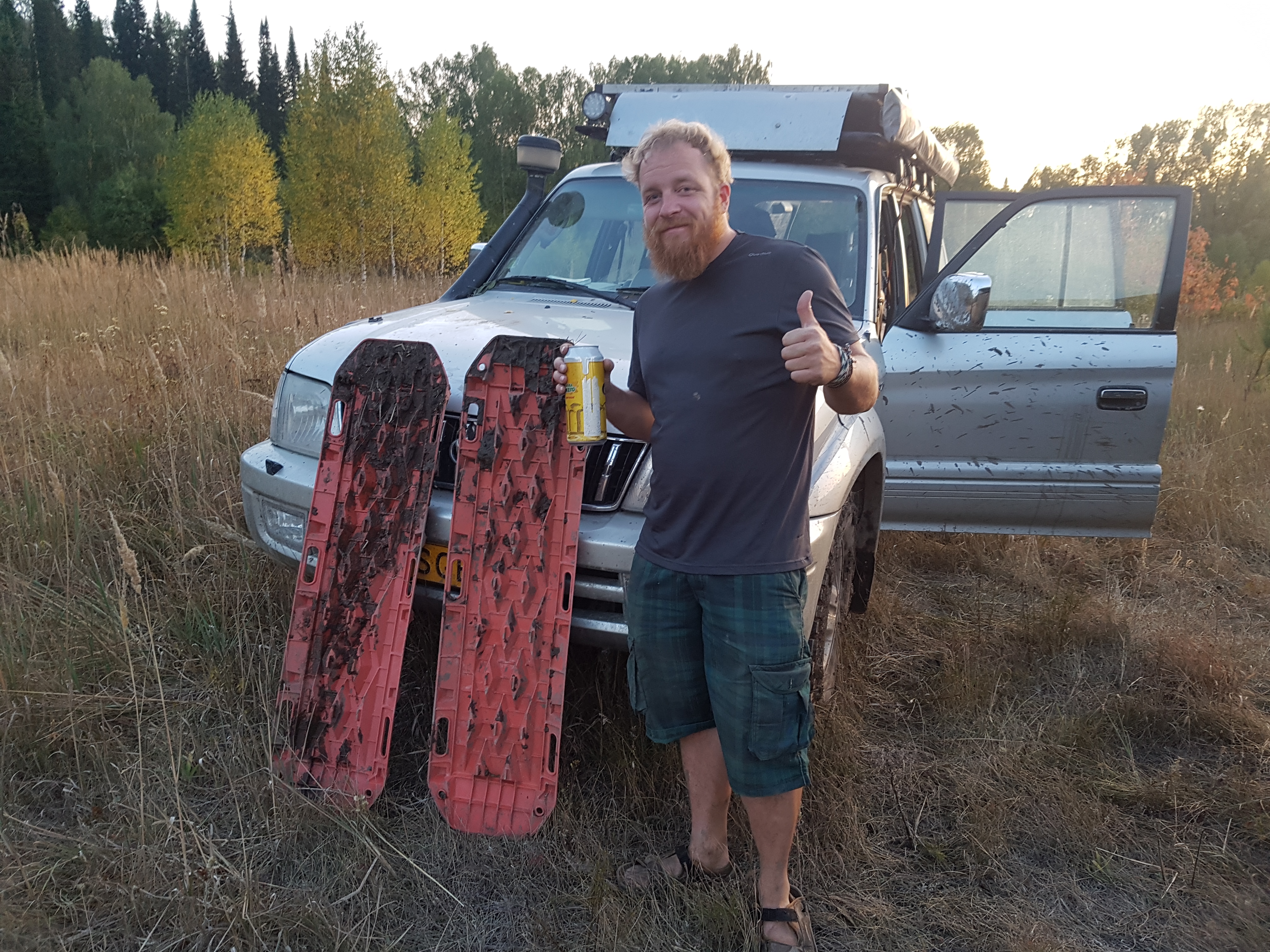 Our serene camp after getting stuck

We were not out of the woods yet. With no idea where the path lead (it wasn’t on the map), and a possible river crossing, it was hard to say how much time we would still need. So we started driving quite early and bumped into a rather wide river about an hour later. Big vehicles had crossed before so there were some deeper, irregular areas so we walked through first, trying to find a good route for the car. We got to the other side without any problems, and the main road was a few kilometers further down the path. We followed it to Semipalatinsk and stopped a few times on the way when we saw interesting rocks. 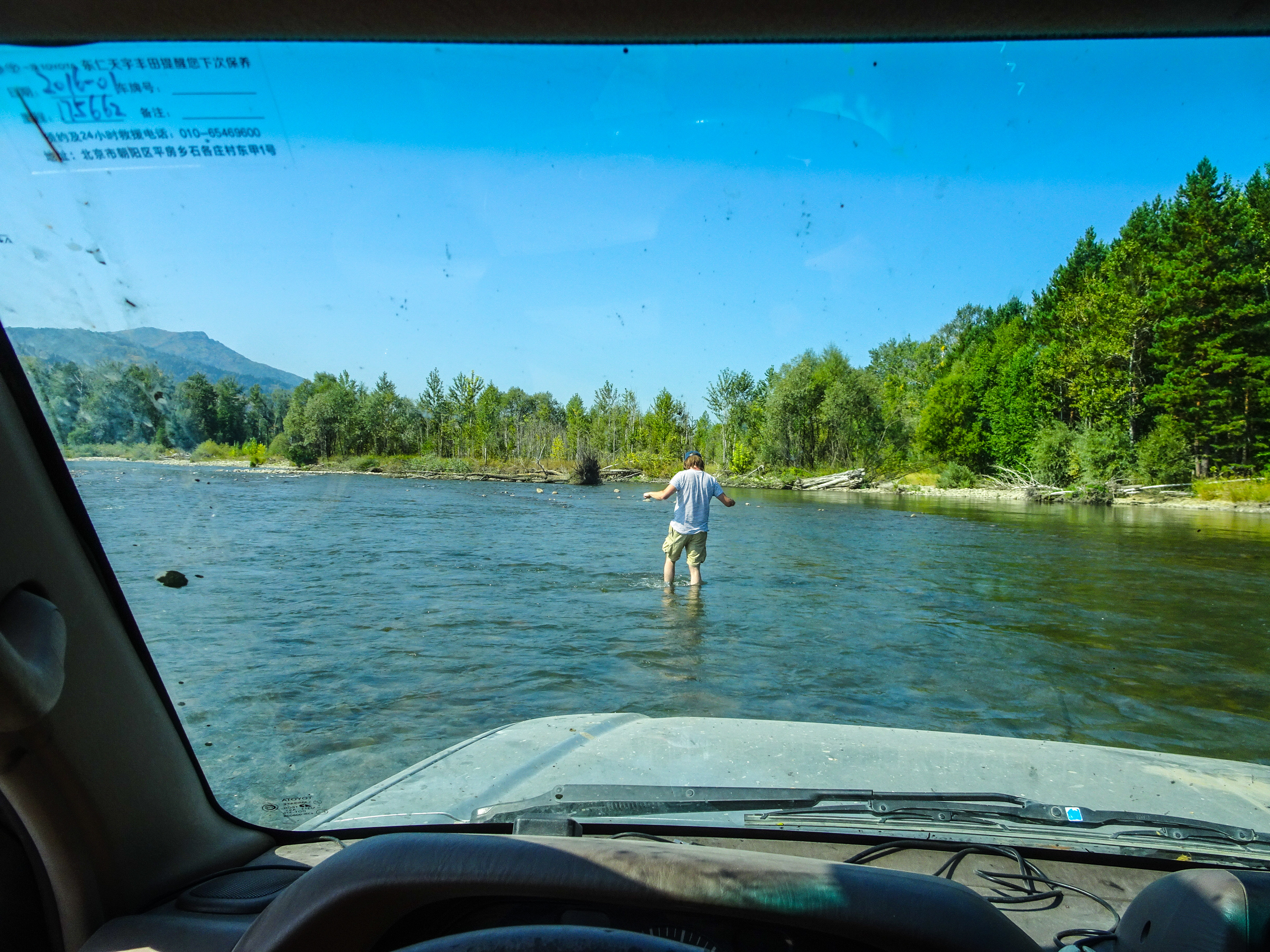 Following Bas through the river 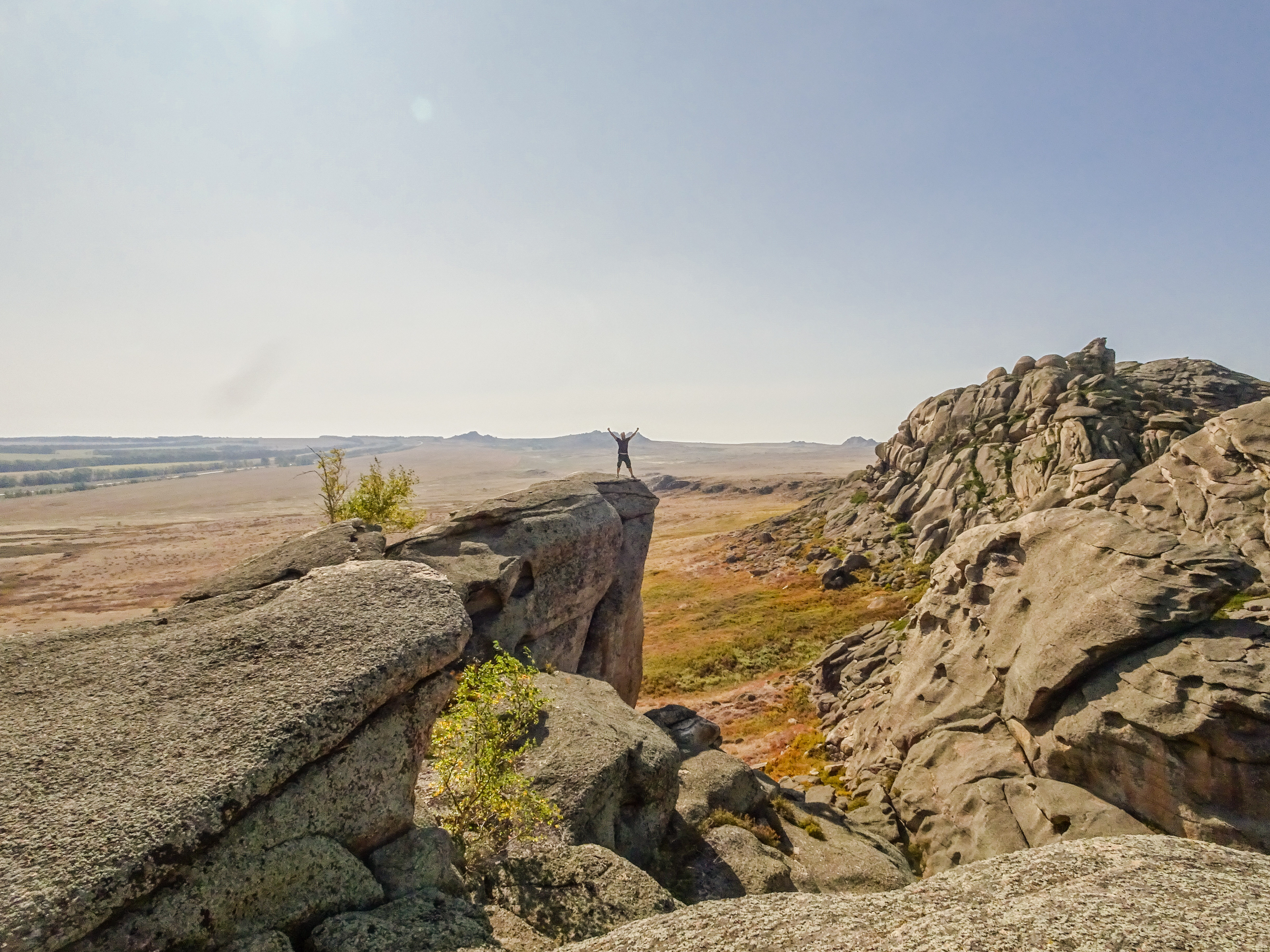 Rock formations on the way back to Semipalatinsk 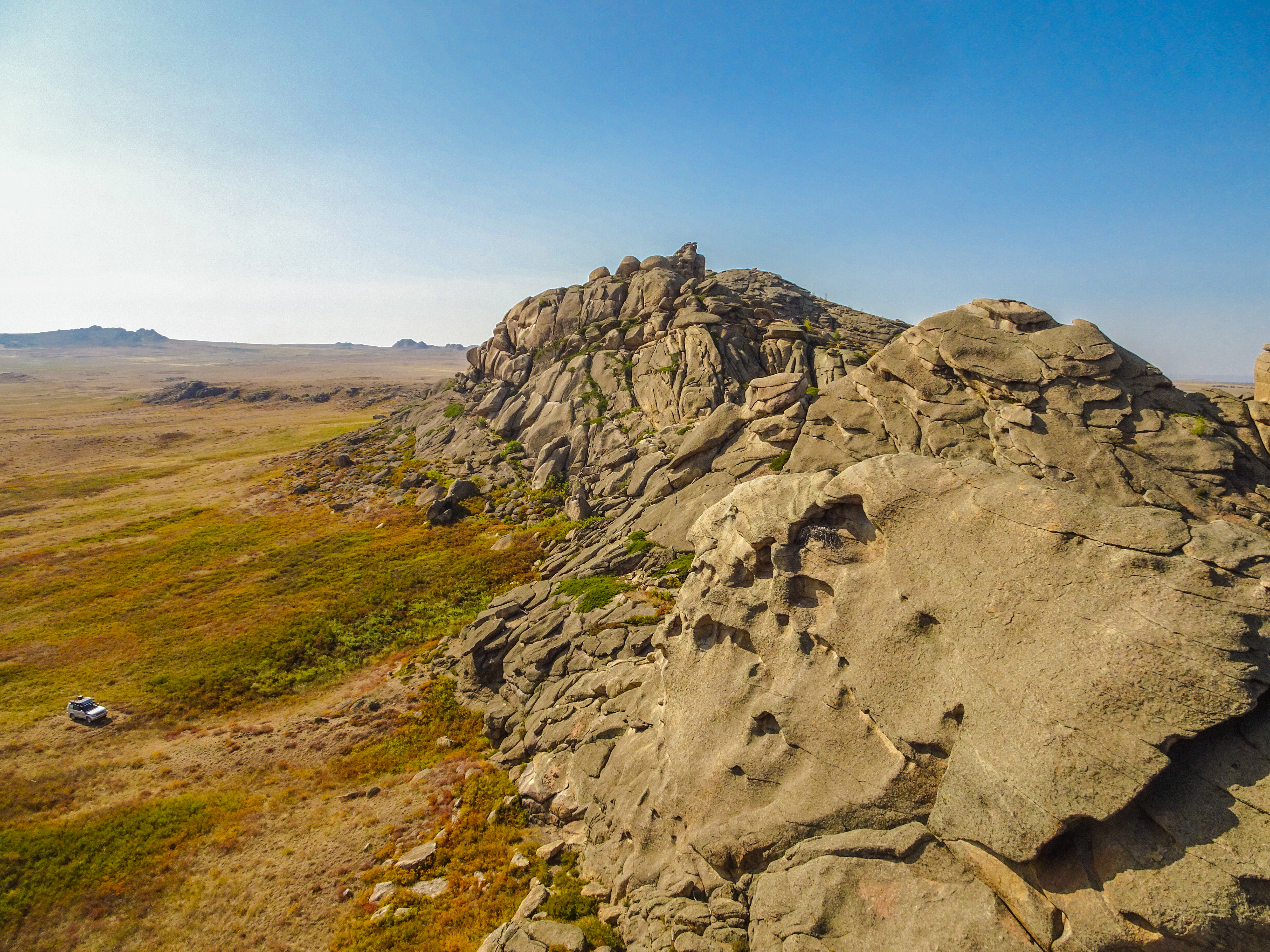 In Semipalatinsk we checked into a hotel and found a place to have our last meal together. The next day Bas was going to take a train to Astana and our ways would separate again.

We drove to the train station and said goodbye. After that I went to a tire shop to get the left front wheel patched. Luckily the hole was small and in a good position so the fix was quick and easy. I did some shopping before heading north, towards the border of Russia. 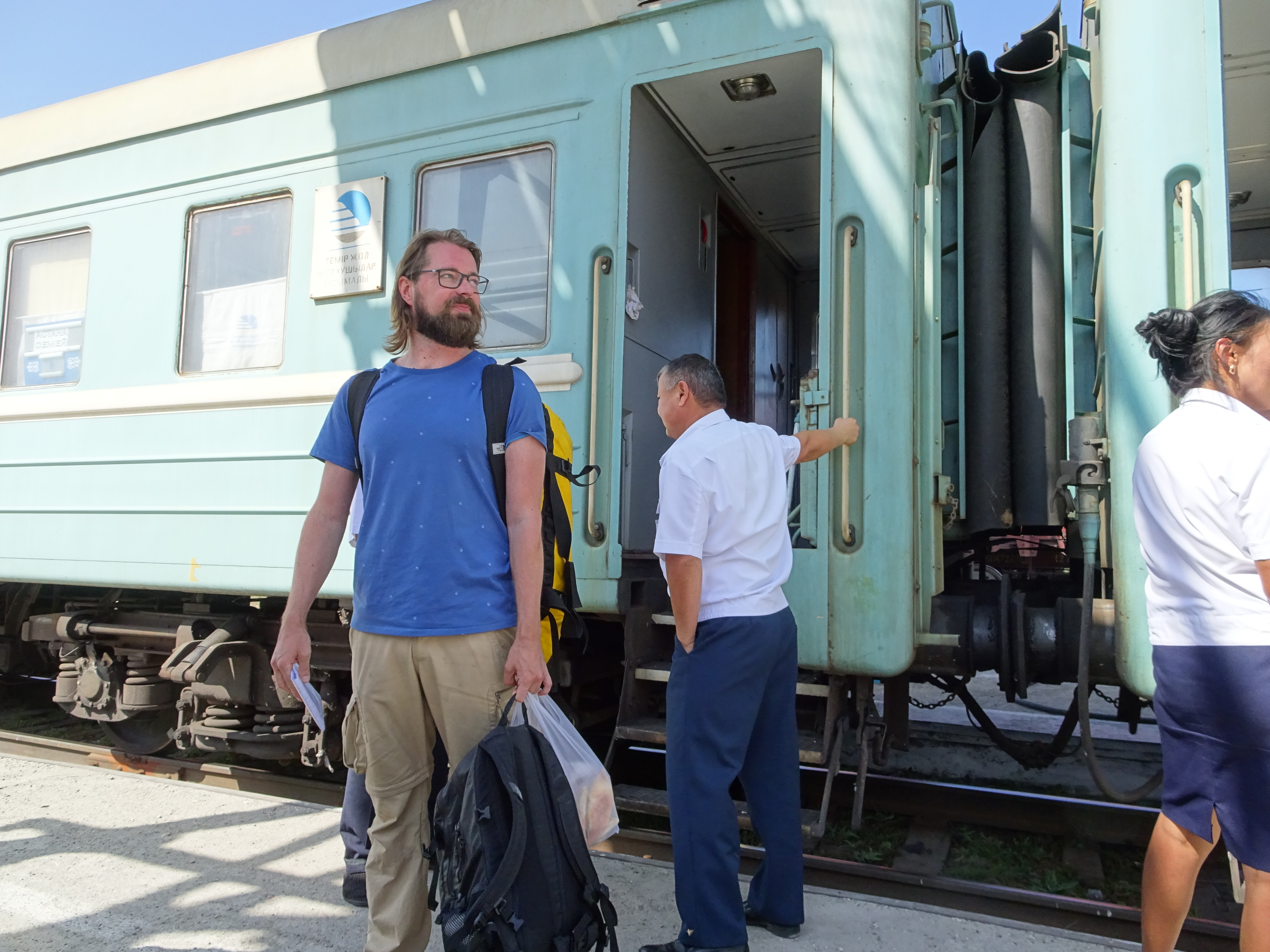 An epic joint venture came to an end.

Finding a good last camp spot in Kazakhstan took a bit of time. A few spots that I tried were full of mosquitoes and flies. But somehow, a few kilometers into the fields I found a spot near a tree line with relatively little insects. I was only 20 minutes to the border from there