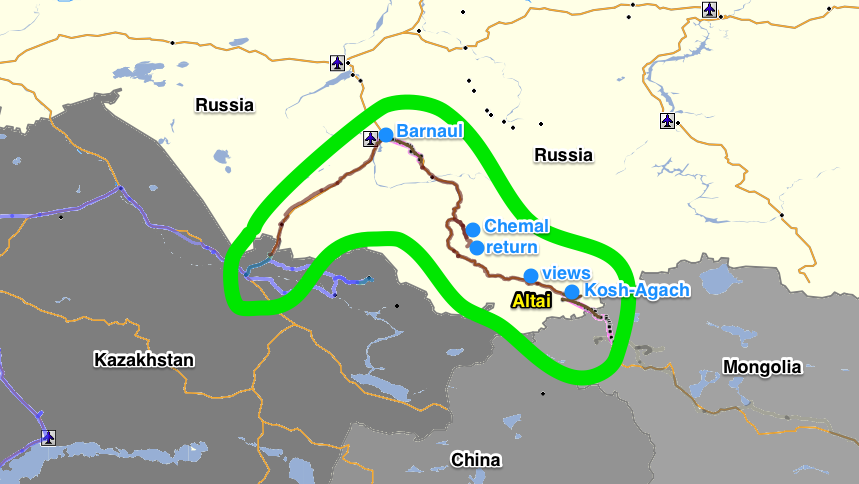 The border between Kazakhstan and Russia went super efficient and all officials were very friendly. I was through the whole thing in about 2 hours, which, I think, is a record. The plan was to go to Barnaul, to get some more work done to Brutus, and after that continue towards Mongolia. It was possible to drive all the way to Barnaul, but I found a promising spot on iOverlander, and didn’t feel like driving anymore. It was a good spot between two tree lines close to the main road. I set up my solar shower in a tree and two hours later had an amazing warm shower.

Time to go to Barnaul and find a mechanic. Things in the steering were ticking and klicking, the left front wheel feels loose and I had to keep putting oil in the steering mechanism. Toyota’s are awesome cars but they do break a little at some point, after a lot of torture. First I went to Hostel Izba, which was suggested on iOverlander. I wasn’t allowed to put the car behind the hostel because of the angry neighbor, but there was a secure parking lot around the corner. The owner of the hostel knew a mechanic and I could go there the day after. That day I made a little walk through town and went to bed not too late to meet the mechanic in the morning.

After a fast breakfast I drove to the place where the mechanic would be, and after some smsses we managed to find each other. We jacked up the car and found a few problems. A steering rod was bent, the main wheel bearing of the left wheel had play, front and rear stabilizer bushes were worn out, and the joints of the front suspension arms were worn out. Maksim could order all parts original and have them an hour later. He started fitting them when they arrived. When I came back from a supermarket, Maksim said “problem”. He had taken off the steering column rubbers and oil fell out. The steering rack had seen its best days and there was rust on the cylinder. It couldn’t be repaired which meant that I needed a new one. In Barnaul there were only original right hand drive steering racks, so Maksim ordered an alternative. This saved me about $700. It would come in the next day and he could fit it right away. So, I spent almost 2 days in the garage with Maksim and his friend. They fit everything (with some small mistakes) and Brutus was back in business! At the end of the second day, a guy from the hostel who was doing the Mongol rally with a Lada Samara, came in to fit a make-shift snorkel. Funny stuff 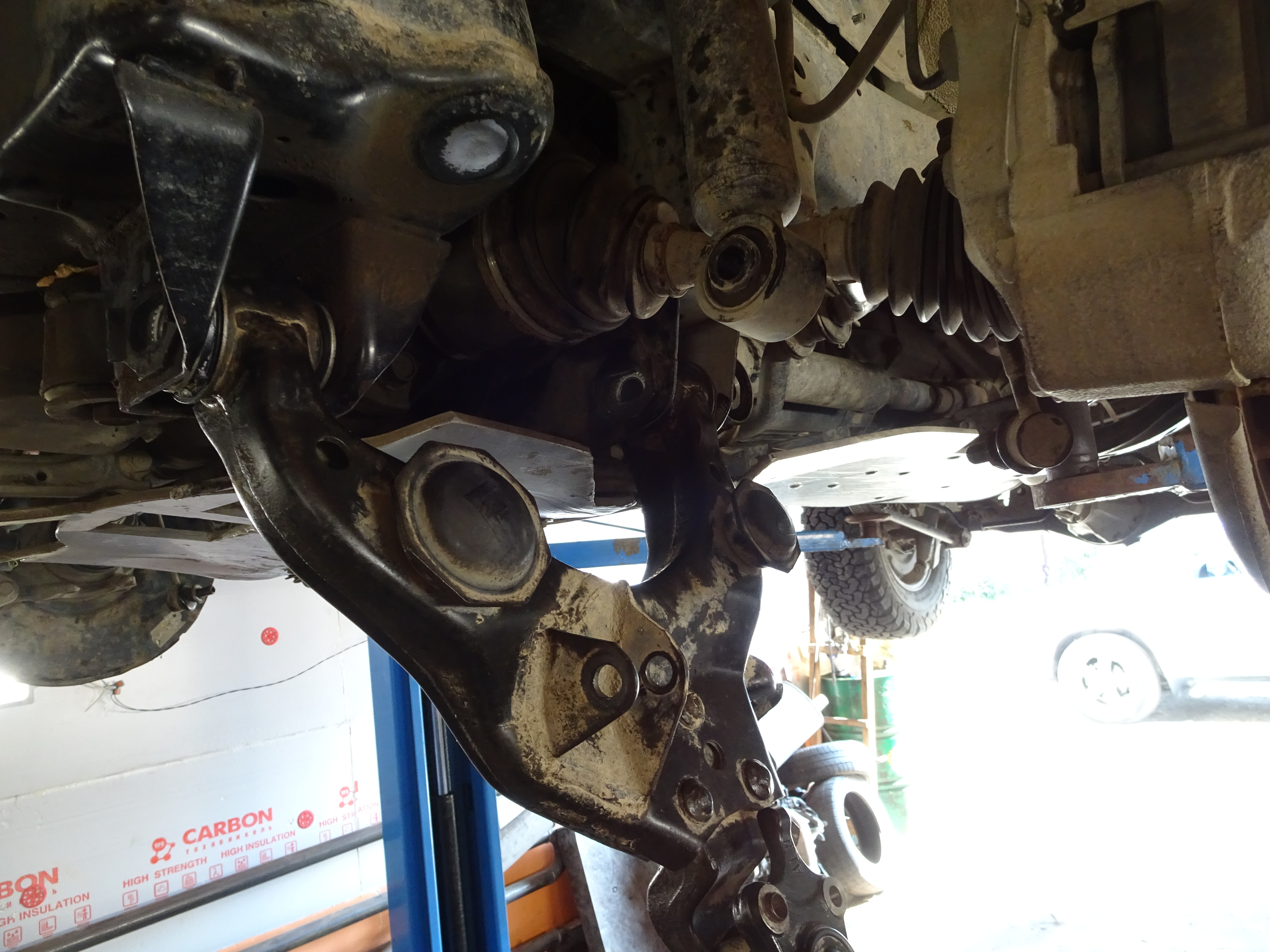 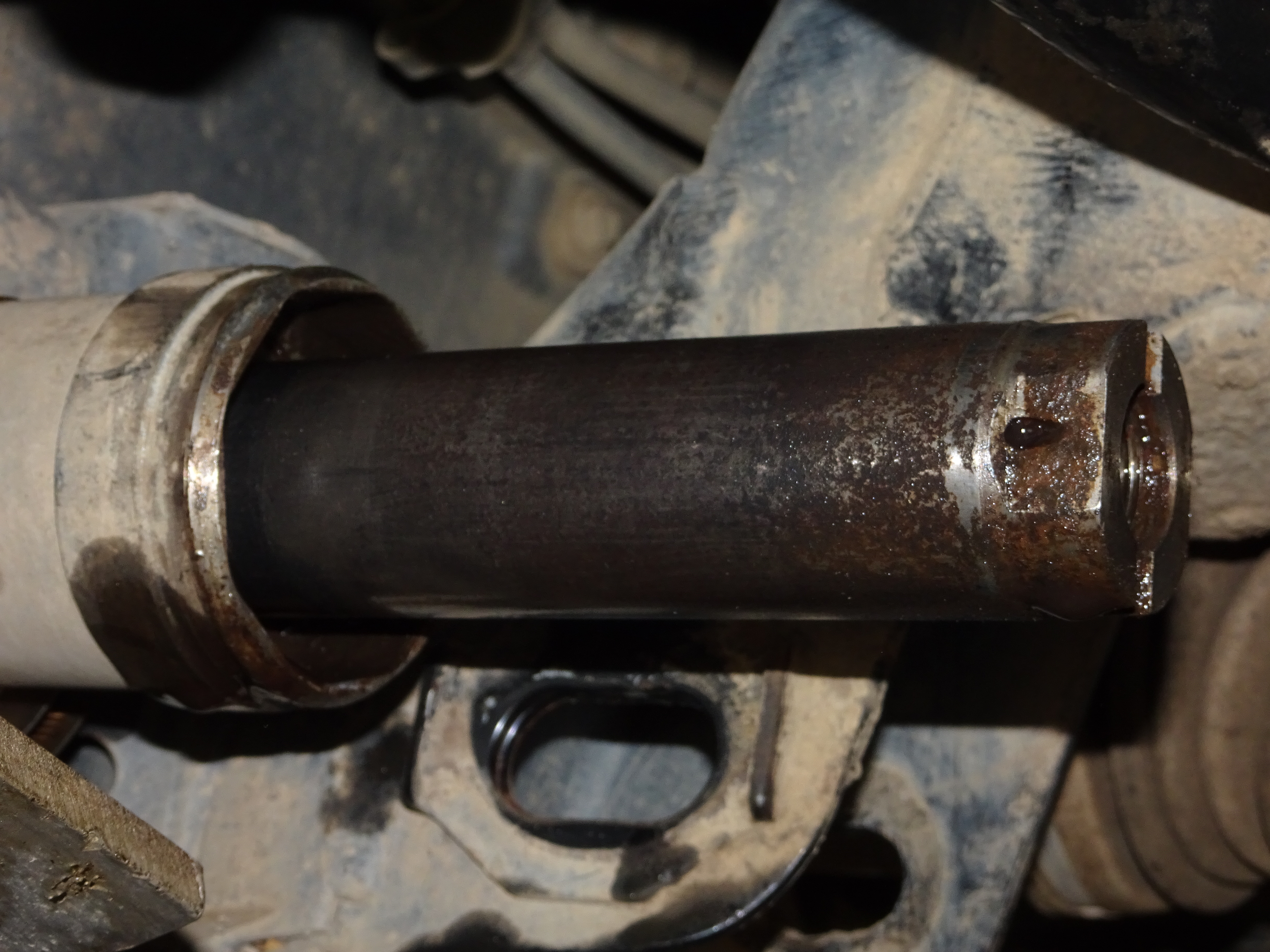 Corrosion on the power steering column 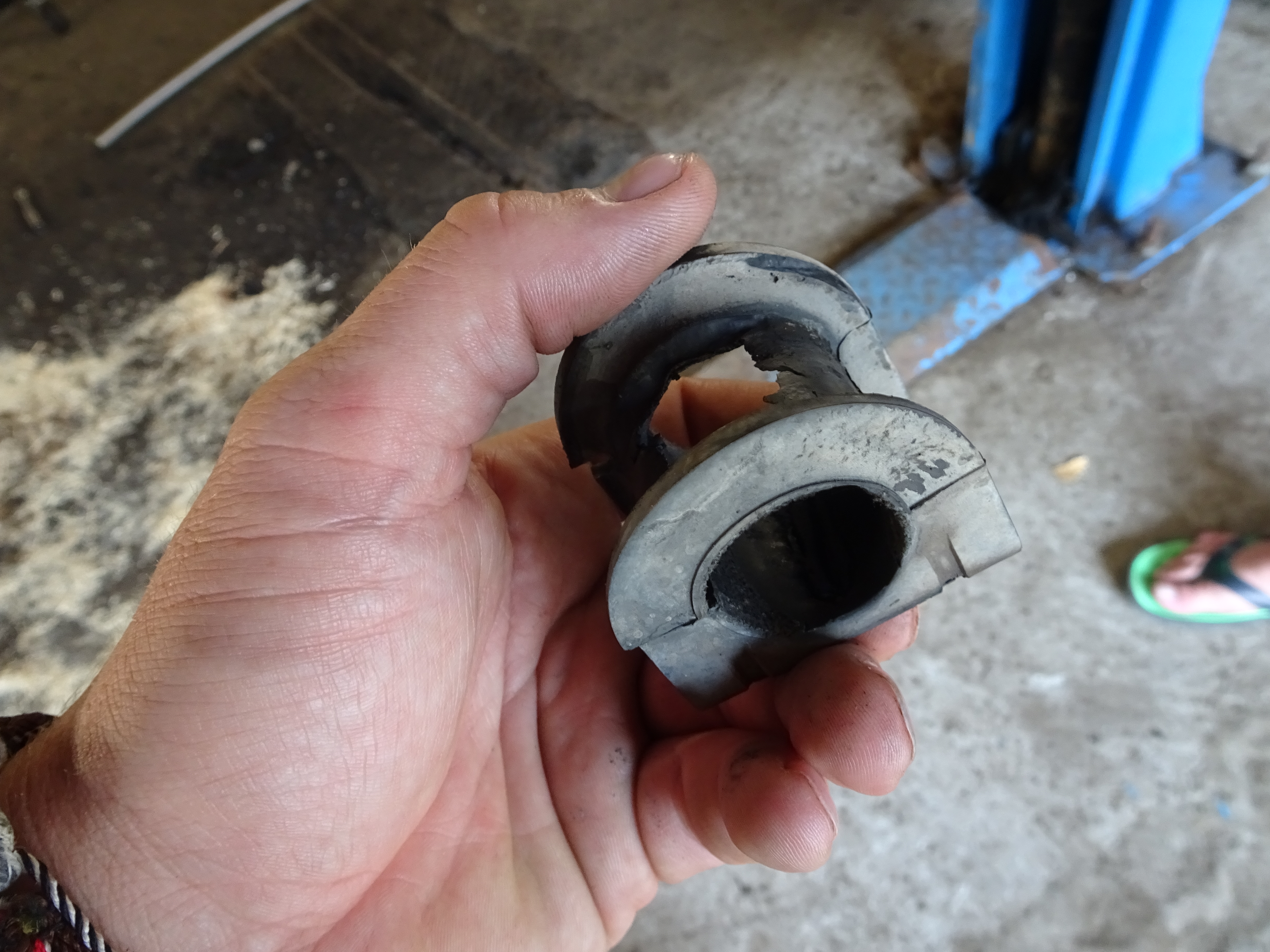 Collection of ripped out stuff

Taking out the power steering rack

Installing a snorkel on a Lada Samara

So, Brutus was fixed and it was weekend. That evening I got some food and drinks with people from the hostel. I asked some people if they knew a supermarket nearby and they helped me out. Joel, another guy from the hostel was planning a night out into town, and I decided to join him. When we walked in town, we met the same people (with family) that helped me get to the supermarket. They invited us to bring us to a night club. We went in and they got a big bottle of tequila for us, and than left, telling us it was their gift to us! So we had a proper drinking night in a club that evening. 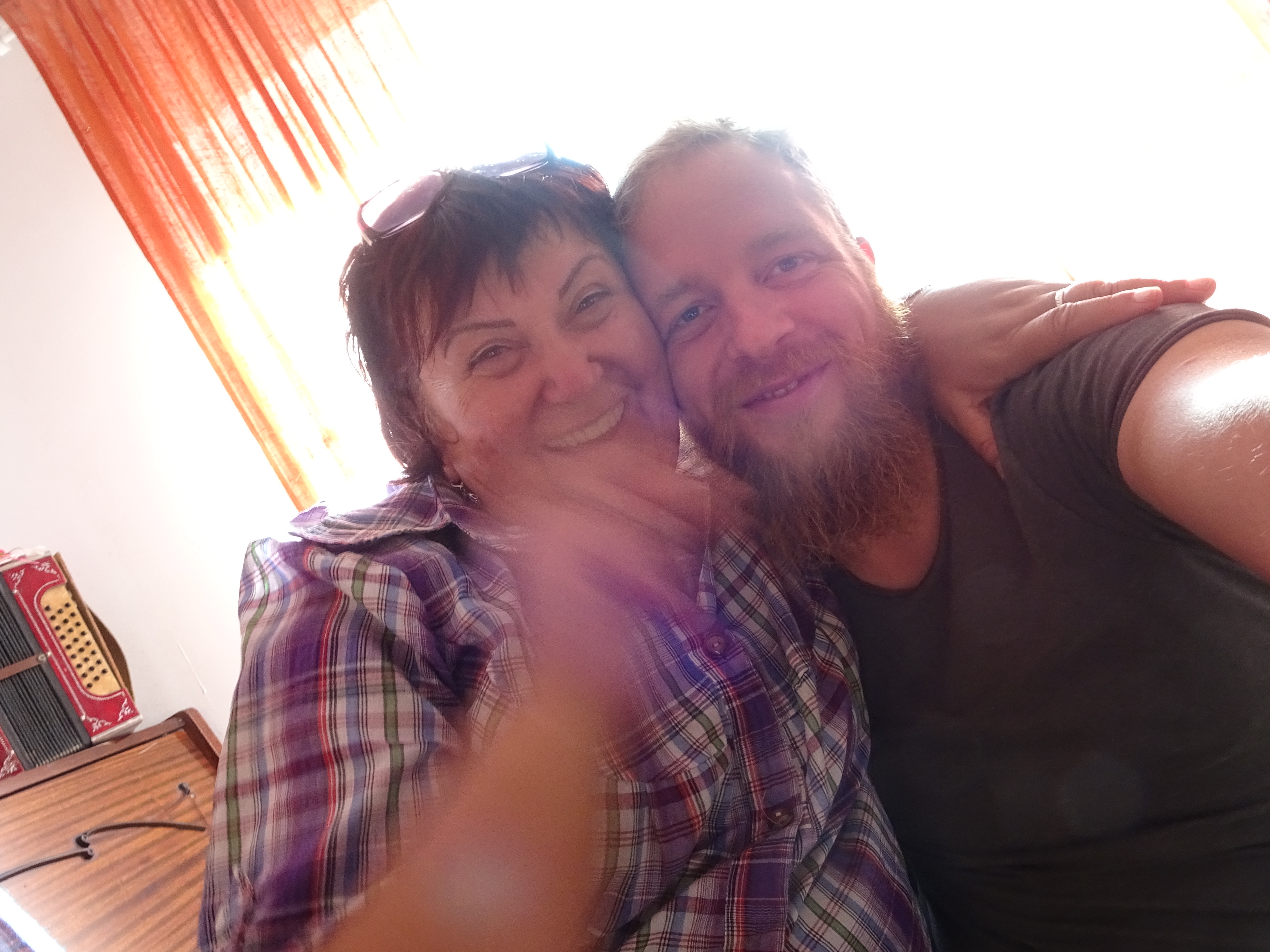 The mother of hostel Izba. The nicest woman in Russia

A relaxed day, and another good night out with Angelika and Julia. Barnaul is the place to be! The next day Joel and I were invited to Angelika’s place and help her settle in again. Brutus and I helped a little moving stuff, and that evening we went for a drive and walk into town. We had a great few days there, making food, relaxing, walking around and going to a trampoline hall. My neck hurt for weeks after :P. Thanks for inviting us to your house Angelika! 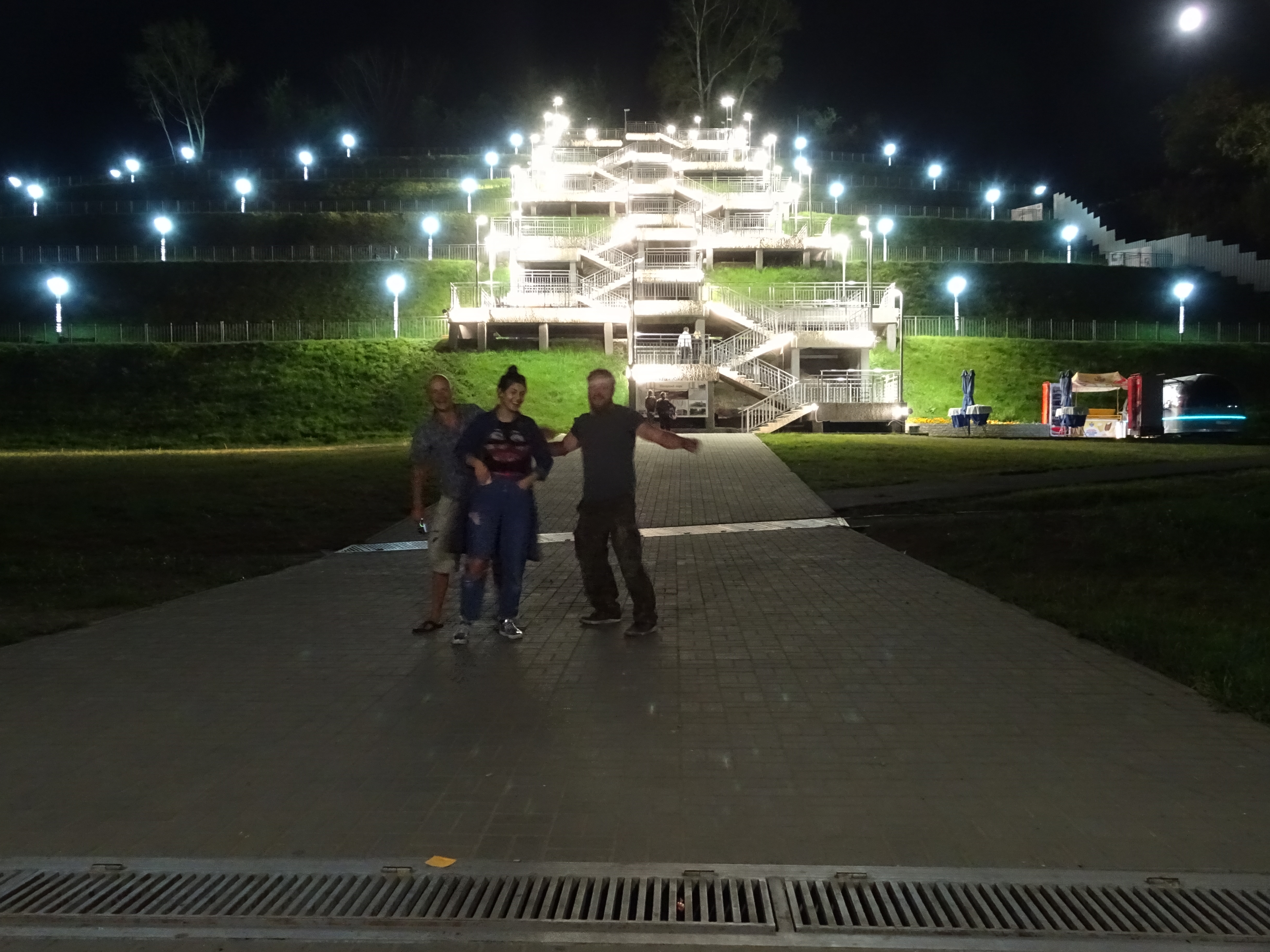 Joel, Angelika, and me on an evening walk

It was time to drive to Mongolia! But first there was some more Russia to explore. The road to Mongolia goes through the Russian part if the Altai, which is an amazing nature area with rivers, mountains, forests and rural towns. This day I didn’t get very far (about 140 km) and had to find a spot near the main road in the dark. I found a nice patch of grass, set up the tent, made some noodles and watched a movie. It was getting noticeably colder in the nights, bur still manageable. The next day I picked up a hitchhiking military man on the side of the road. No English, but my 10 Russian words and gestures were enough for the hour. He even took some pictures of me when we crossed the border to the republic of Altai. I dropped him off and continued to Chemal to check a church on a rock, and a house-for-everybody. The surroundings were stunning. And even though the weather was a bit sad, the church was being renovated and the house-for-everybody was closed for the winter season, there was a cosy feeling in town. But after I checked town, I continued down the road to find another camping spot, right next to the river with a fire pit. That evening I made a nice fire and had a tasty pasta with some beer. It felt kind of primal on my own. 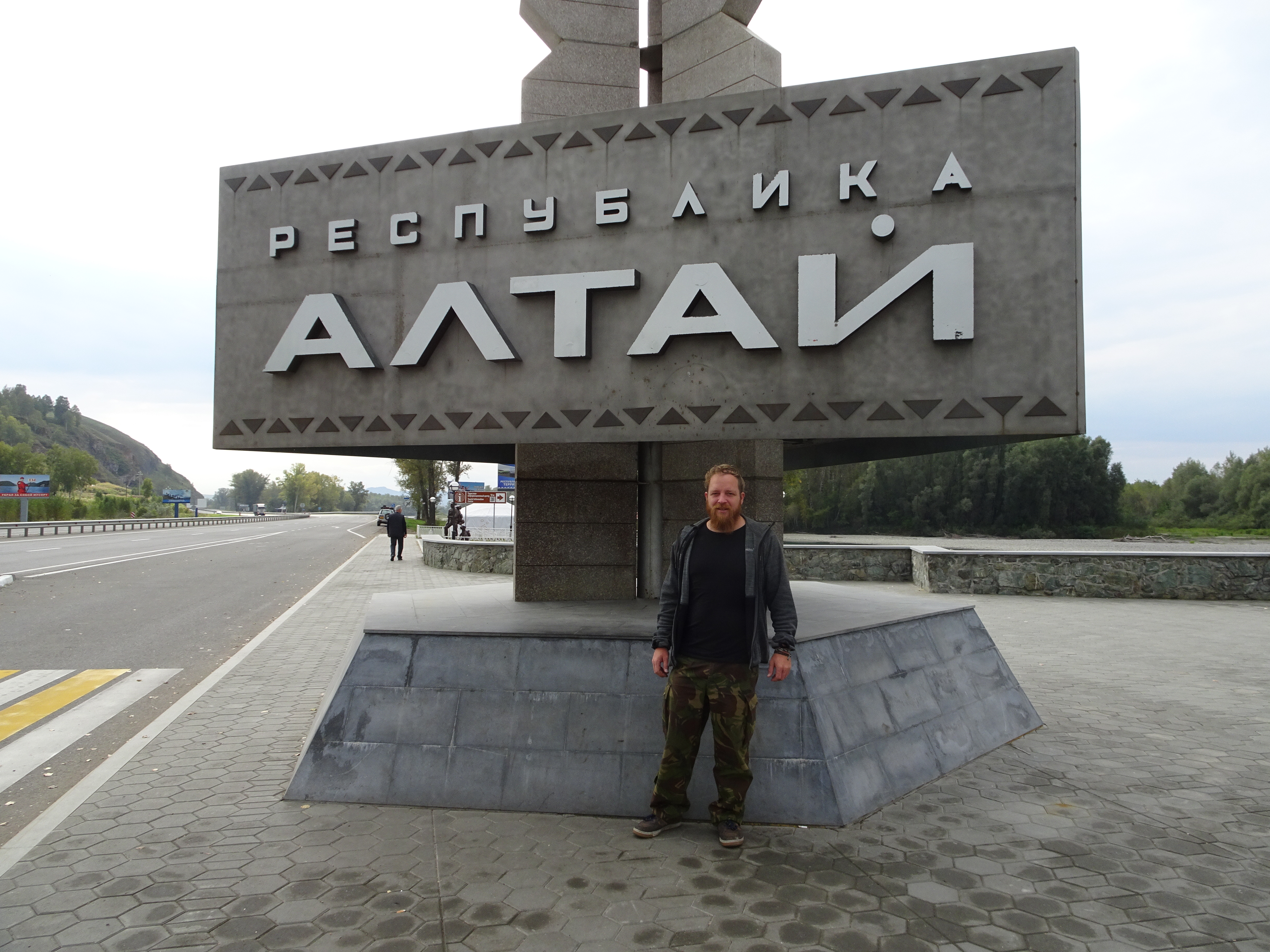 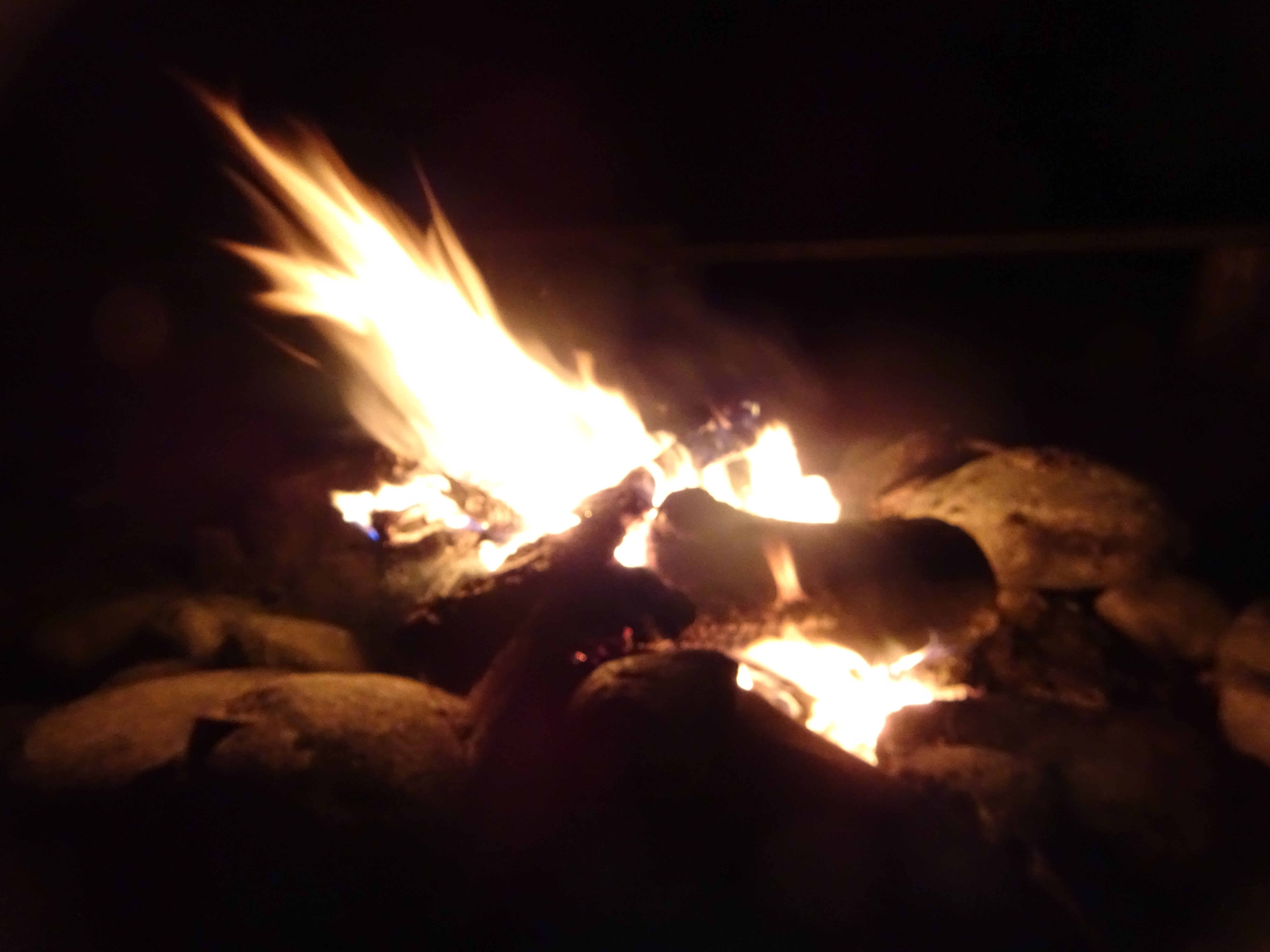 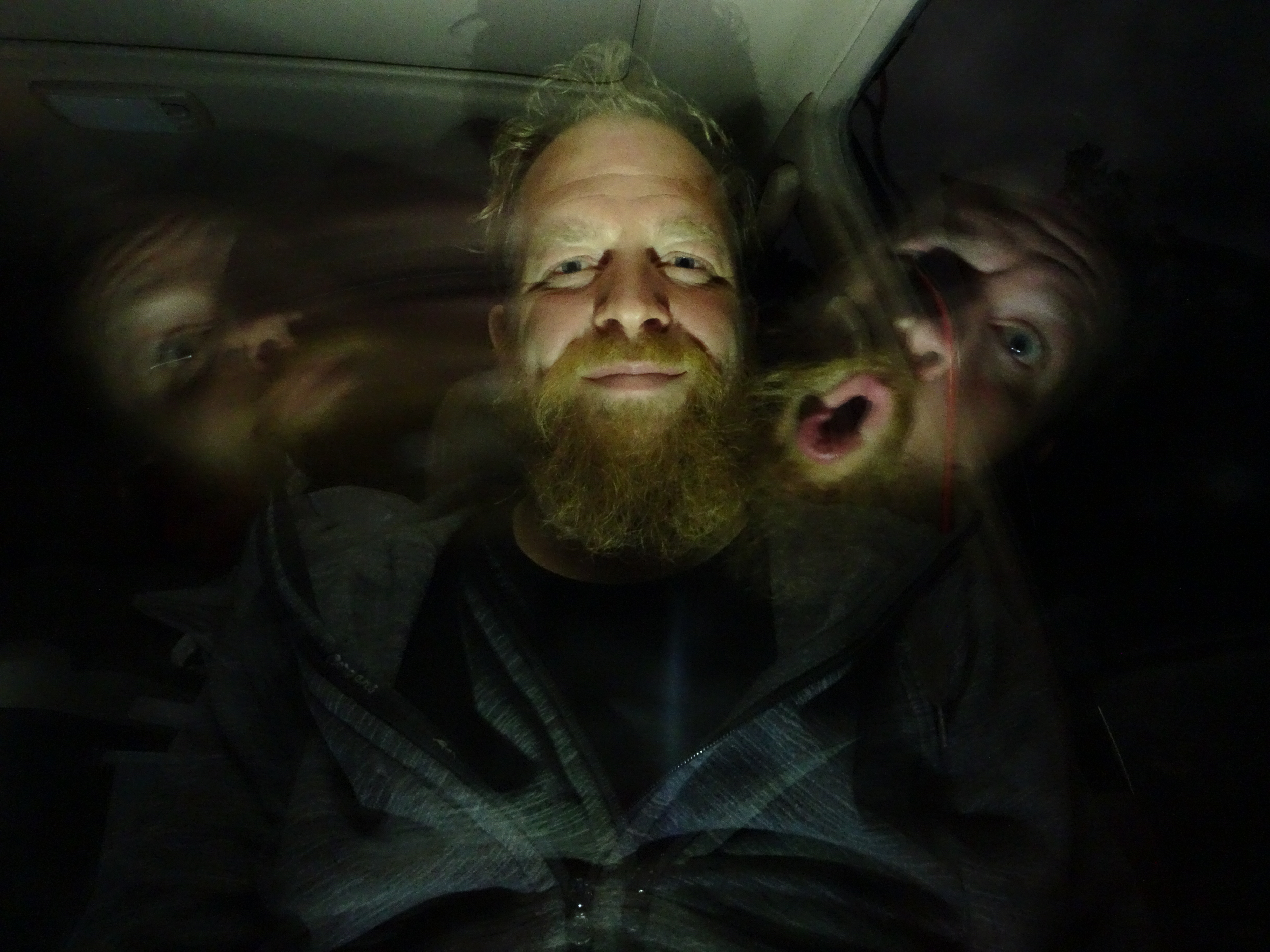 Camp next to the river

I found a path on the map, leading back to the main road that leads to Mongolia. When I went there, I met some people who asked around for me if it was possible to drive that off road path. some of them said yes, and some said no. The ones saying no were locals, living very near. Of course I went looking, but when I saw the type of vehicles they use there, I decided not to do it. I drove all the way back to the main road, a 270 km detour and camped very close to where I would have ended up, would I have taken the off road path. On the way back, the sun came out, and made the surroundings truly spectacular. There are also interesting caves and bridges on the way.

Rock wall with a special echo, according to some Russian tourists

This made me turn around

Camp on a slope

The next day of driving was epic. I was more or less celebrating behind the steering wheel. Amazing rivers, mountains getting larger and larger, snowy peaks and more old and new bridges. It’s really one of the most beautiful roads in the world. And suddenly, right before Kosh-Agach… it was kind of over. This village is situated in a dry, dusty depression. I decided to check into a guesthouse there, and do some writing. There I shortly met a Czech motor cyclist who just came from Mongolia. This guy had been on many trips before and just passed over 1.5 million kilometers in more than 30 years. Relaxed evening. We took a few pictures the next day.

Some guy offered to take a picture of me and the landscape. Golden hands

Luckily I didn’t have to cross this one

One of the many great views, with Brutus and me in it

After the guesthouse, one more night in nature. It looked like there wasn’t much in the neighborhood to camp at, but after a bit of driving I found a village near a small river. Behind the village were a bunch of trees and green grass, perfect for a tent.

Finally! To the Mongolian border! From my camp it was a one hour drive. I parked behind a row of cars and trucks, and got talking to some other people who were waiting. About half an hour later, 2 other non-Russian cars parked behind me. A British Land Rover Defender and a British Toyota Land Cruiser (pretty much a mirror image of Brutus). We got talking and decided to team up towards Ölgii, the first big town with an overlander guesthouse. The border crossing was a little sluggish. The Russians wanted to check the British’ car quite thoroughly, my car medium thoroughly and the Germans loosely, and there was a bit of paperwork to do. The Mongolian part was a bit more chaotic. We lined up before the border fence and had to walk towards a little cabin to get some paperwork and pay a bit for sanitation (which didn’t happen of course). When I was at the little cabin, many people just passed my car and parked in front of me. No queues here :). But when I had my papers done I just drove to the front of the queue and with a little complaining and laughing, I got through first. There was some more simple paperwork and a 2 second check of the car, and we were in!

3 thoughts on “Russia I”