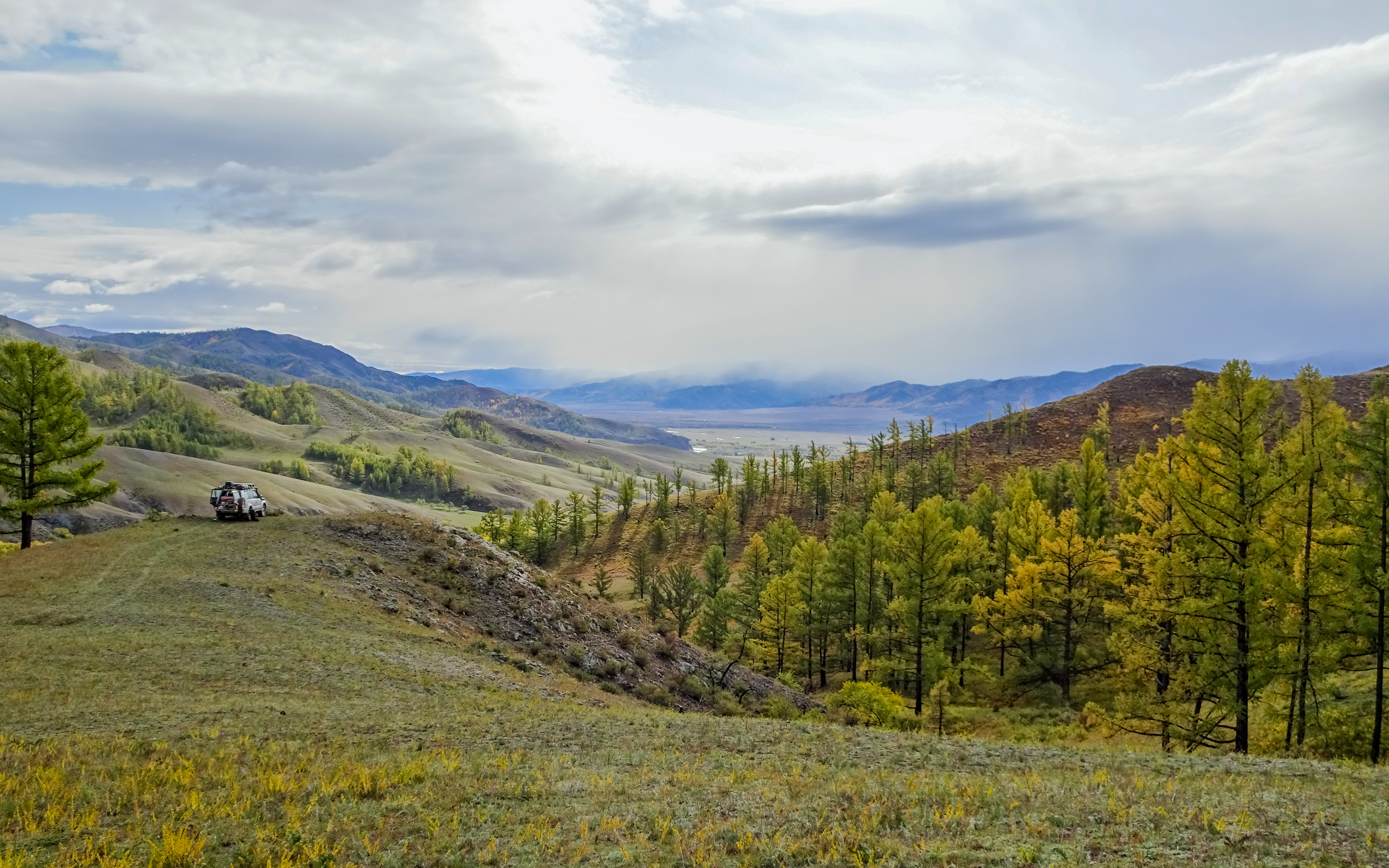 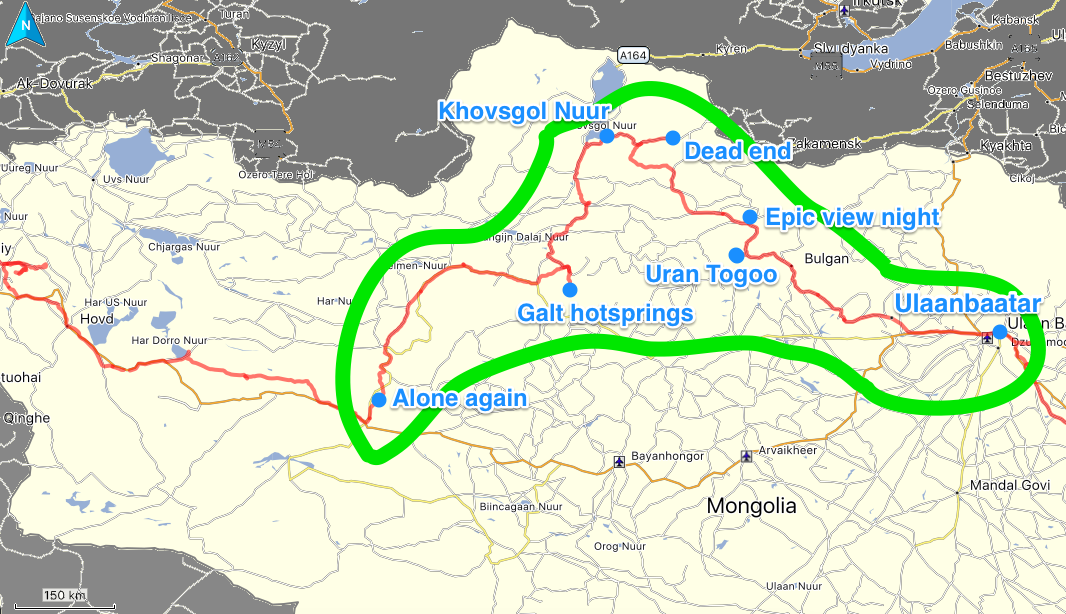 The engines of the Germans and British fired up early. This woke me up to a slow morning. I made a standard yoghurt/oats/egg/tea breakfast, checked out the scenery for a bit and fired up my engine too. From there on the world was mine again. A lot of lonely driving through epic landscapes lay ahead. In the first few hours, a clunky noise from under the car became worse and worse. When I took a peek, I saw that the (brand new) stabilizer bushing on the right side was worn out. Rubber poking out on all sides. With some plastic which I got from a local family I tried to make a temporary fix. They stopped when they saw me laying under the car. While I was fixing the bushing, they found my file and fixed up their massive saw. About 100 km down the road, the noise started again, but not too intense. I arrived in a colorful-roofed town with a Buddhist monument and took a few snapshots. After filling up the tank again, there was another 4 hours of sand track and road work combinations before I started looking for a suitable place for a camp. I found a straight place on a kind of ridge to put the tent, next to a dead horse and a scary forest. Autumn was visibly setting in here. Perfect creepiness. That night I made a nice camp fire combined with some vodka mix drinks, feeling utterly alone, even though I was close to a “main road”. 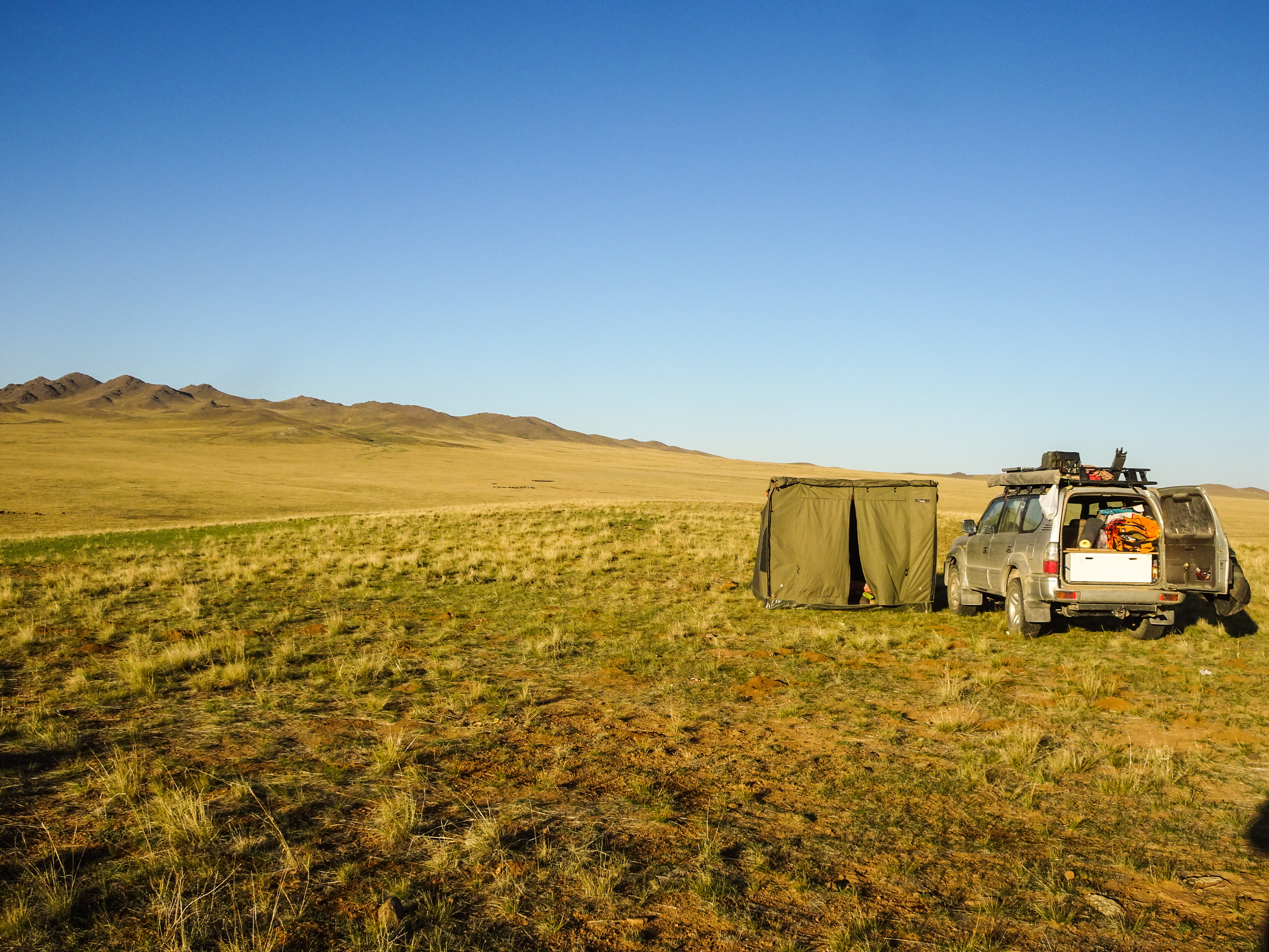 Waking up slow on the plains 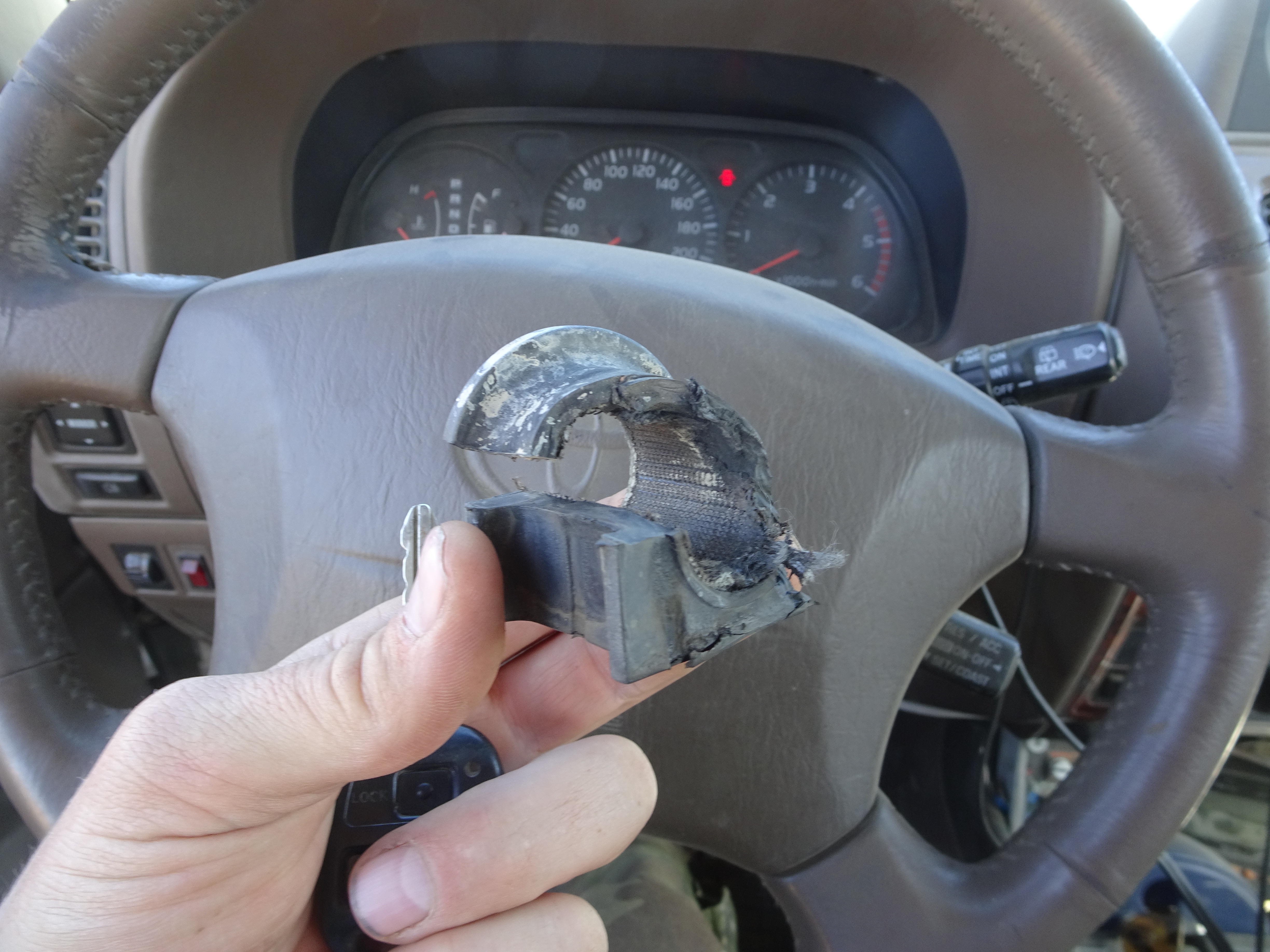 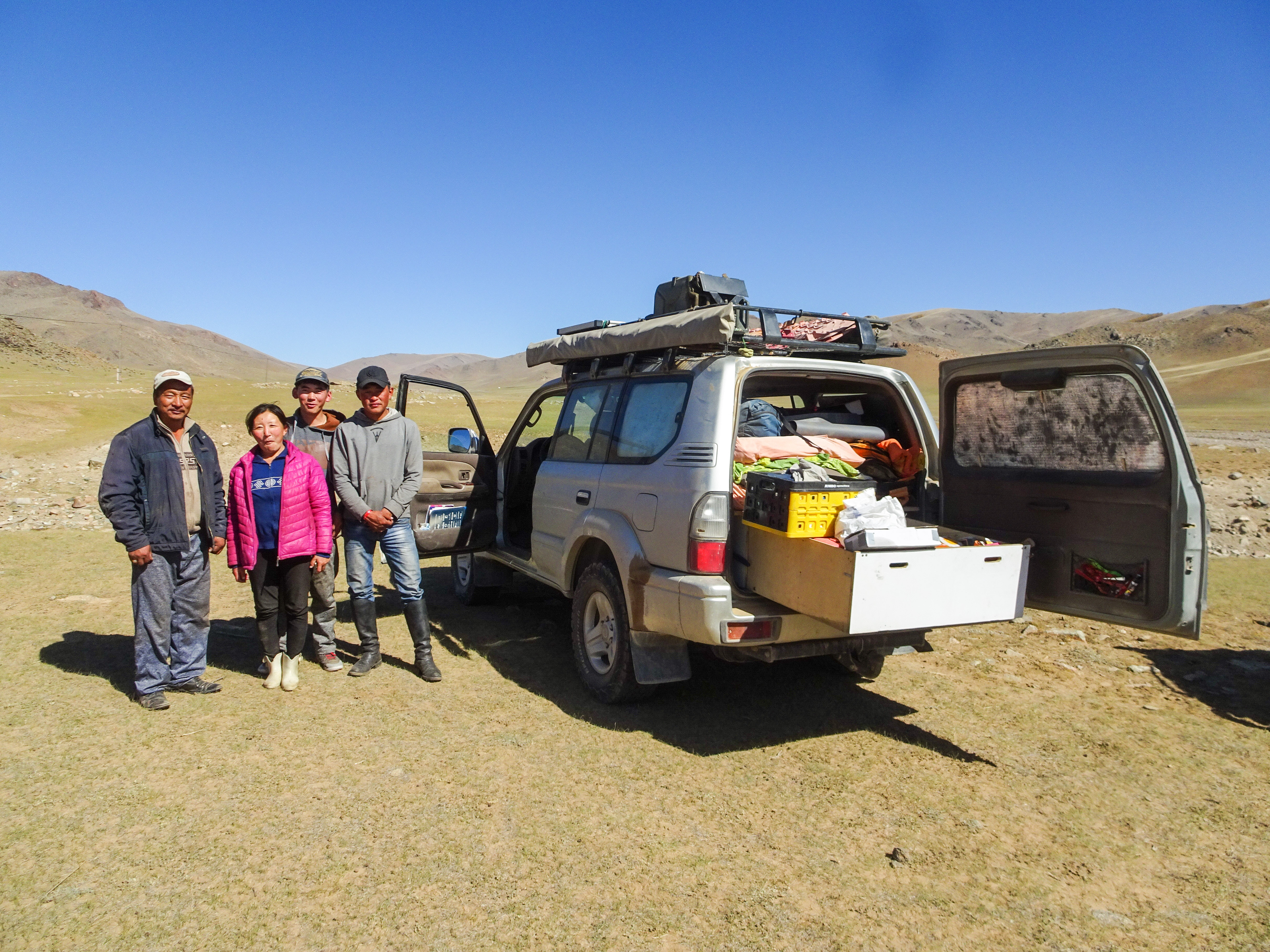 Family helping me out a bit (and themselves ) 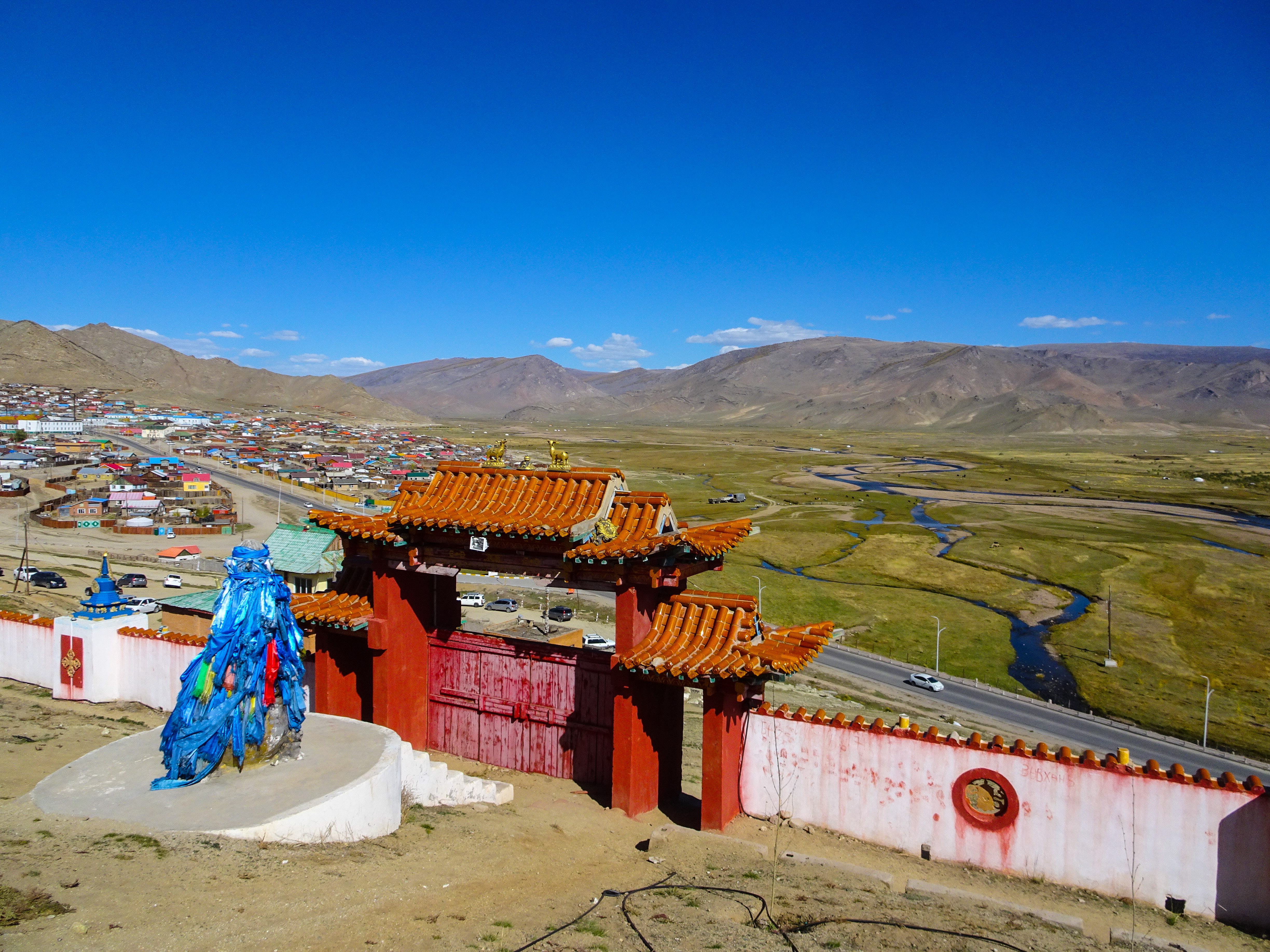 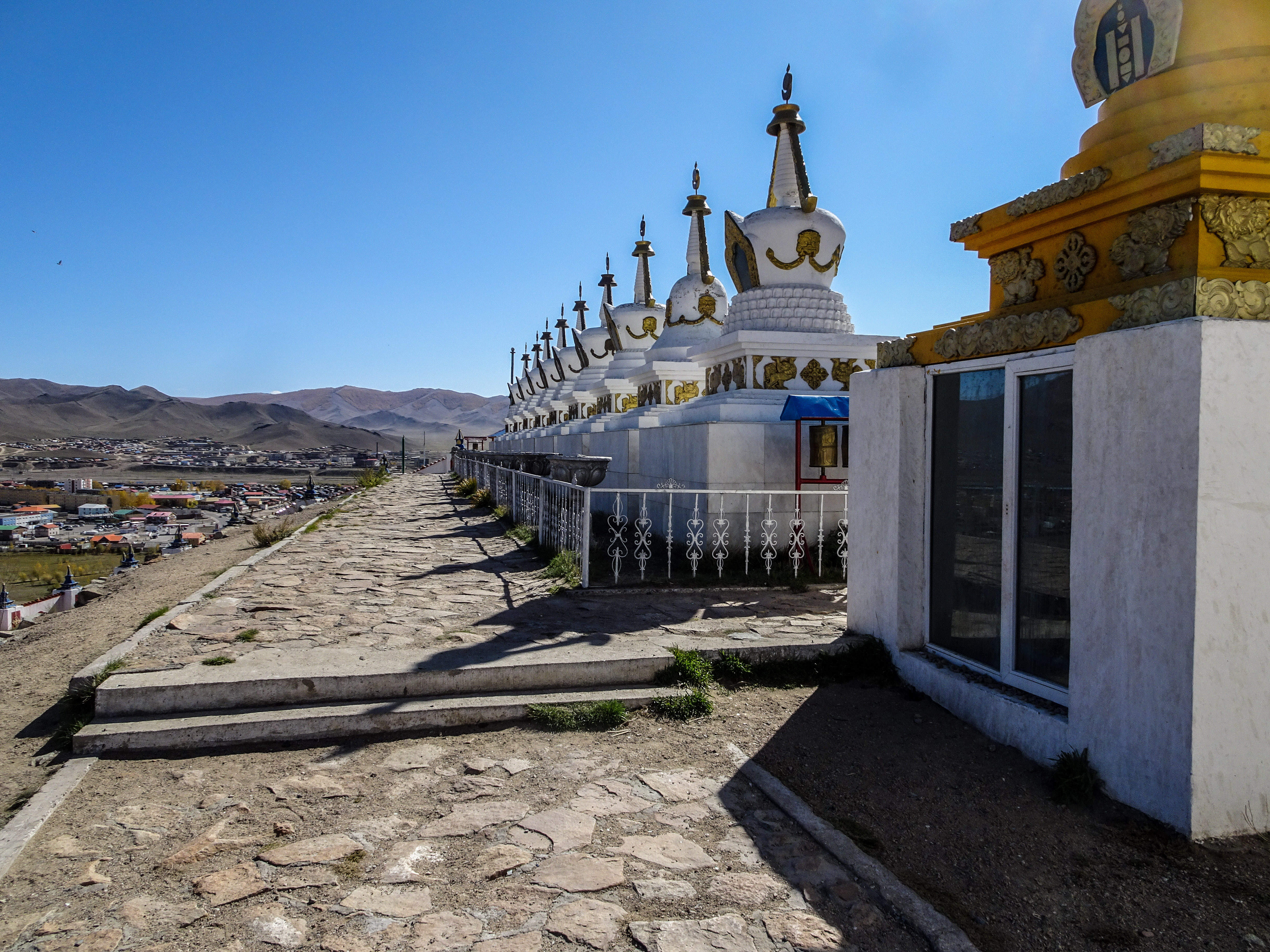 Once back on the road, I was soon on a real patch of tarmac! Oh so comfortable The goal for the day was the Galt hot spring, which I found a few days before on Maps.me. Sometimes a random goal turns out great. And the route there was great for sure. Very windy, very off-roady, with very diverse landscapes and a few minor river crossings. When I arrived at the Galt hot springs, everything looked empty and deserted. But after driving round the premises, and walking over the bridge to, what seemed to be, the main entrance, a woman who spoke some English opened the door. She told me that the resort was closed 2 days before and that they were preparing the place for winter. But for 10.000 tugrik they allowed me to take a shower and a dip in the hot spring. It was really relaxing and slowed me right down. When I was done, the women were nowhere to be found so I left a note for them. I hope they found it. It was dark when I tried to find a place to camp. So about half an hour from the hot springs, I just parked Brutus in the hills and set up the bed in the car. When I woke up it was all white around me. Winter was slowly moving into the higher areas. 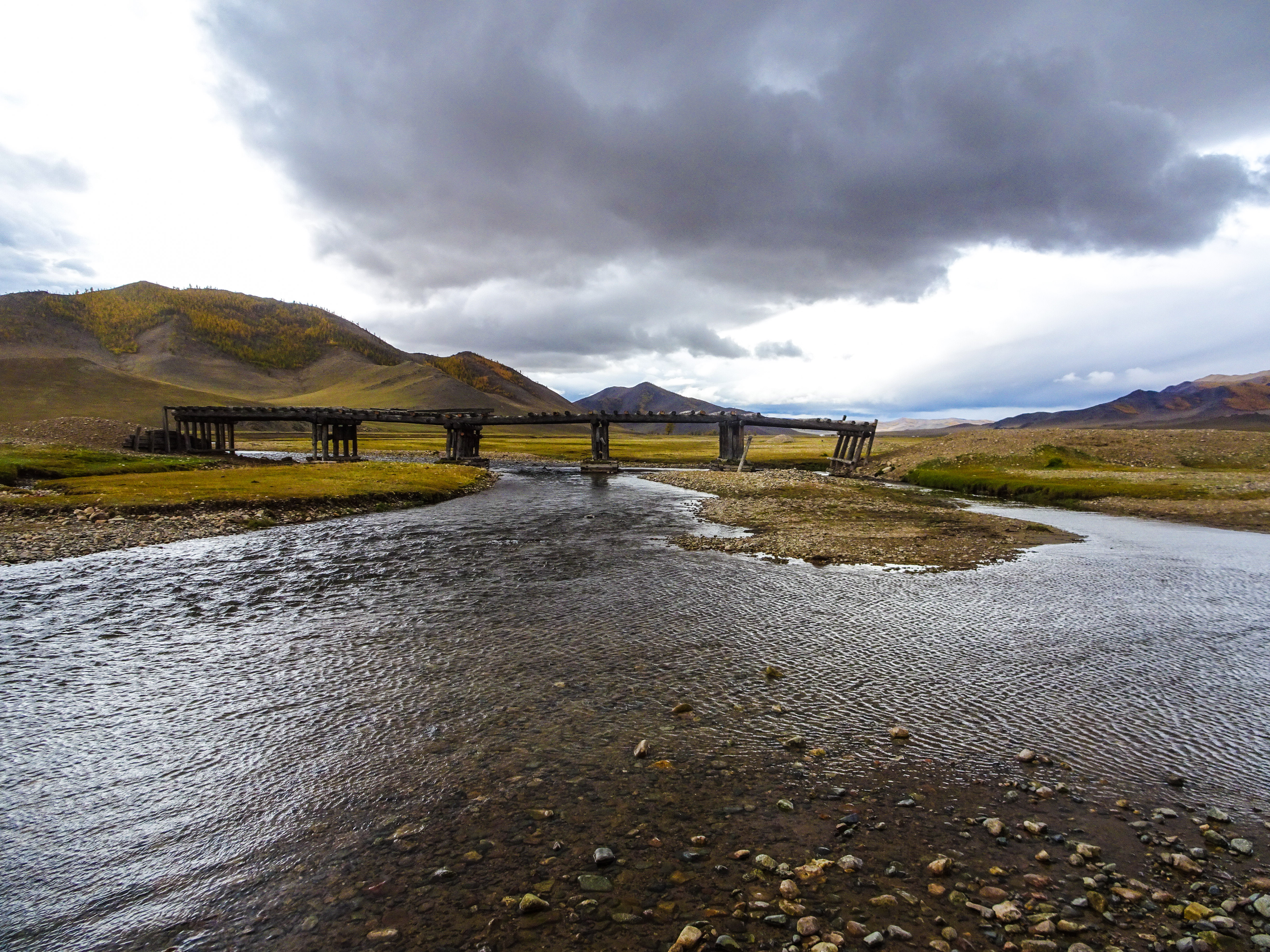 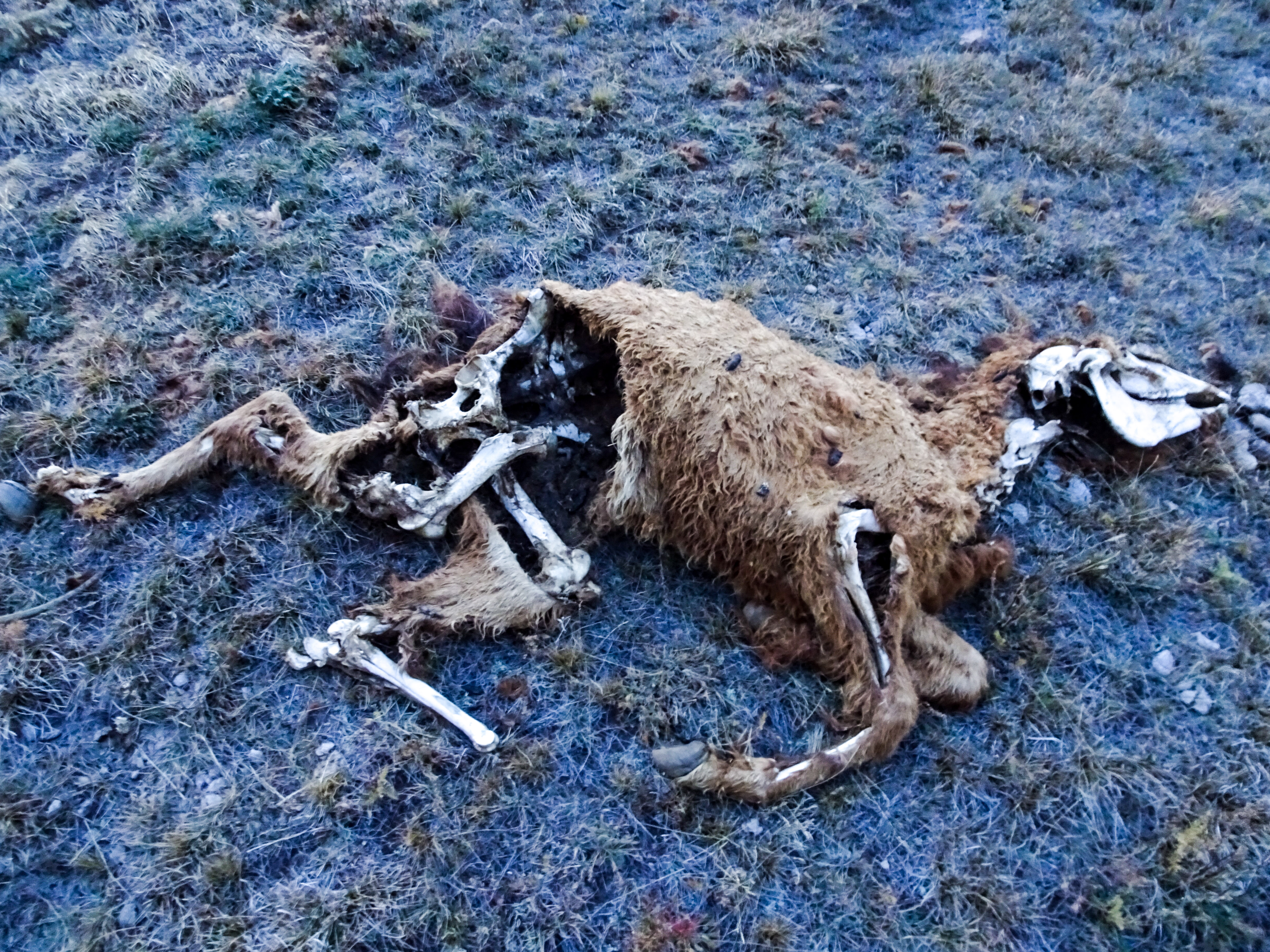 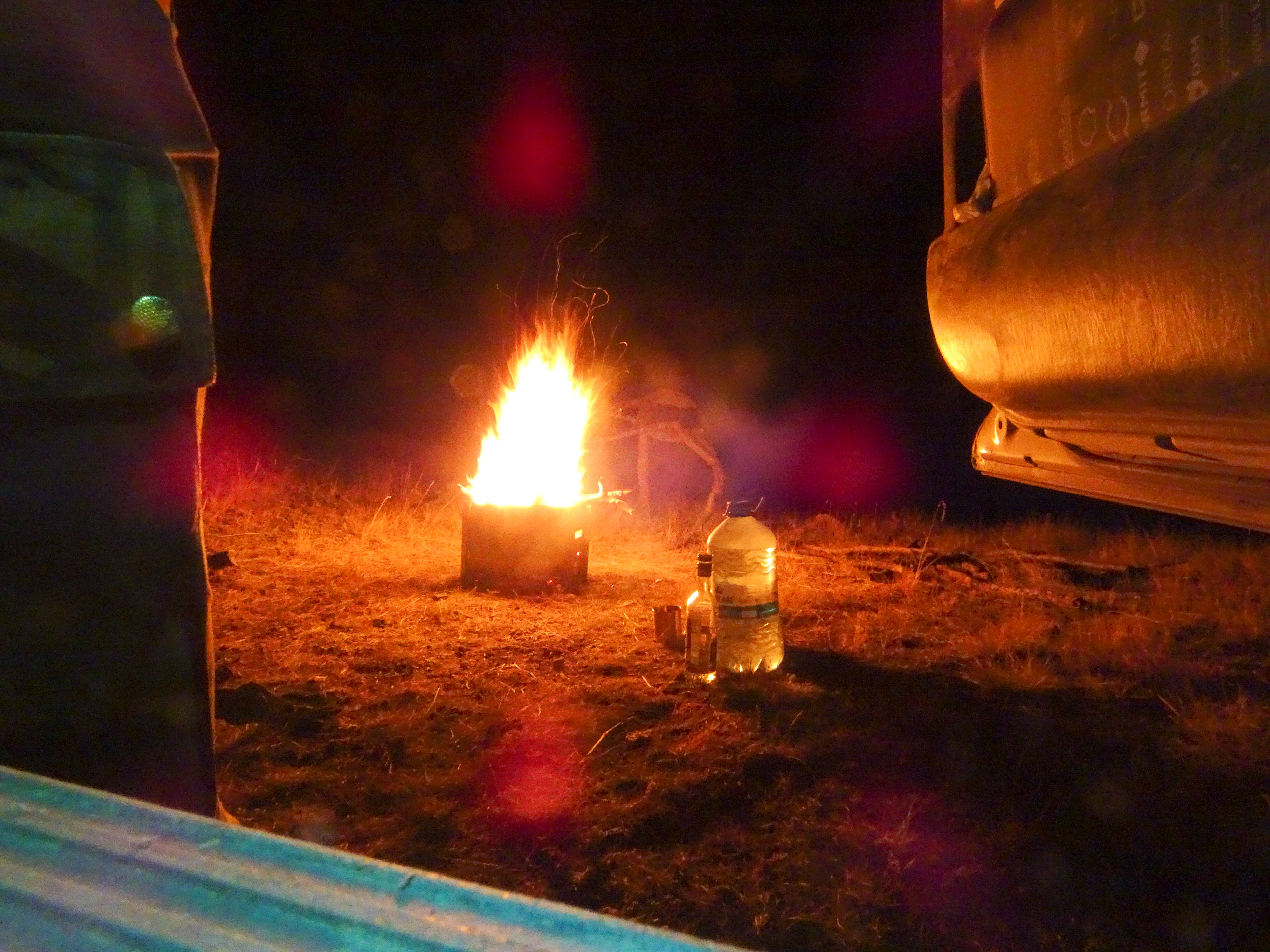 My scary camp was not so scary in the morning 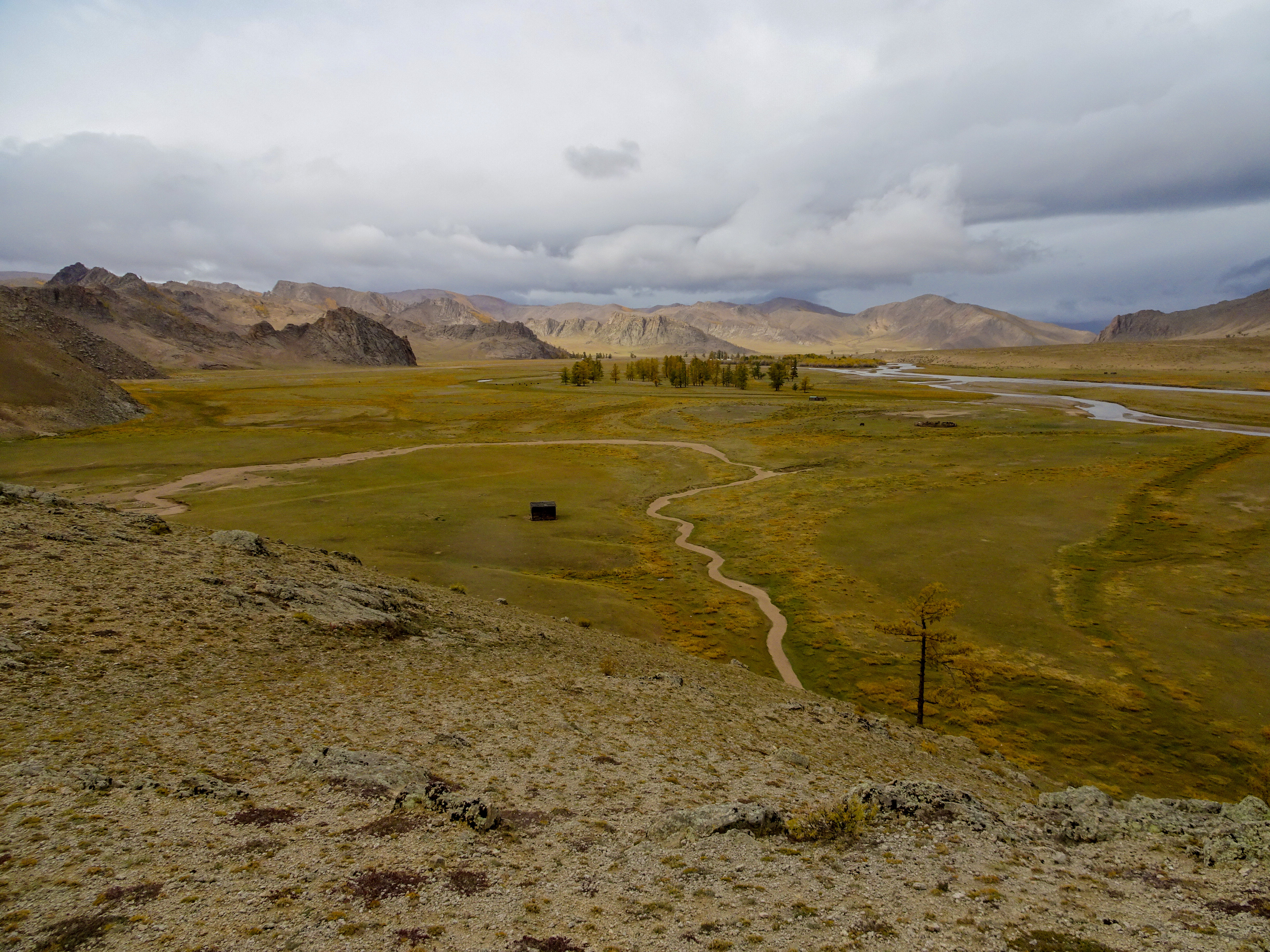 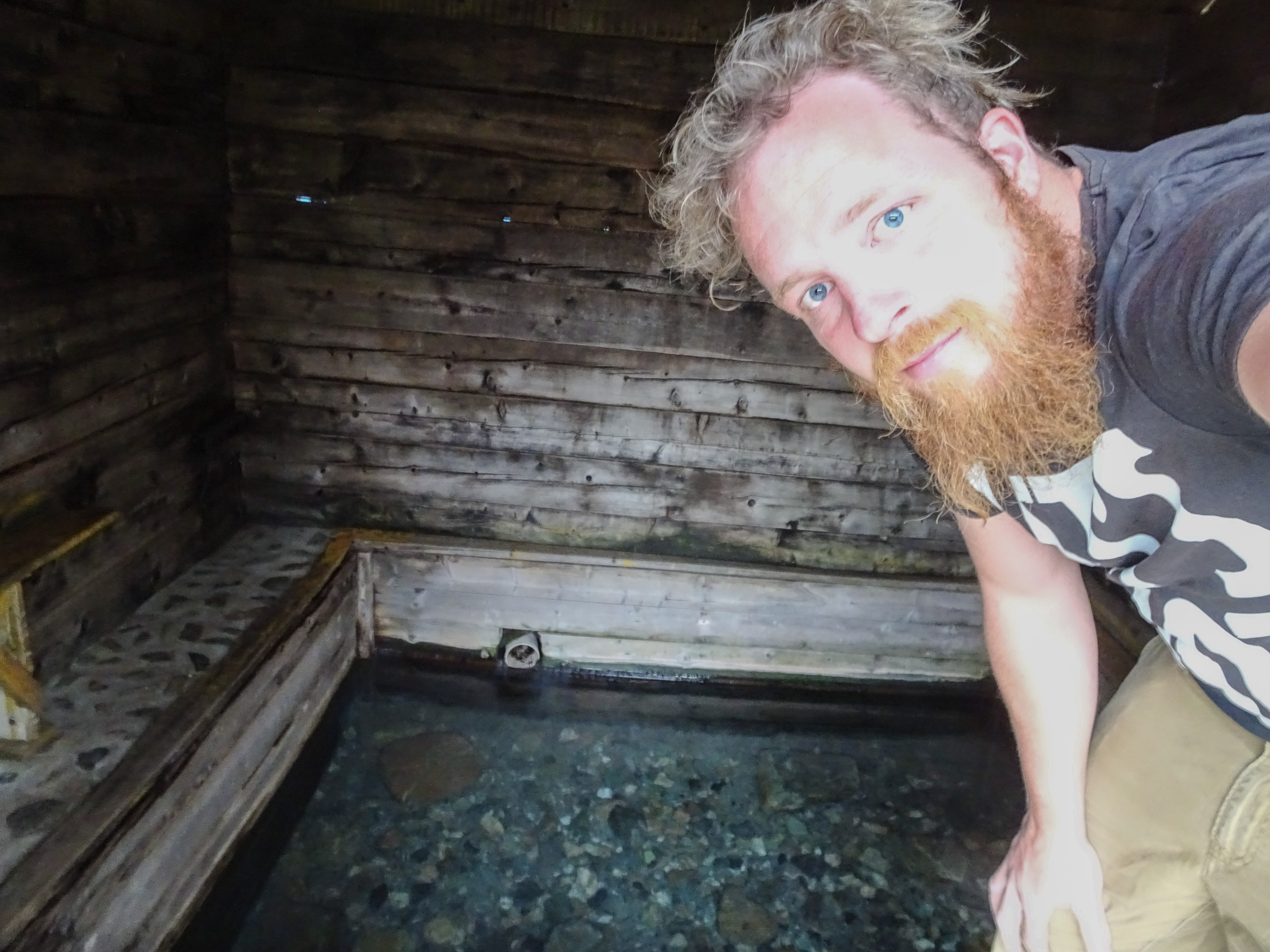 Ready to get in the hot spring 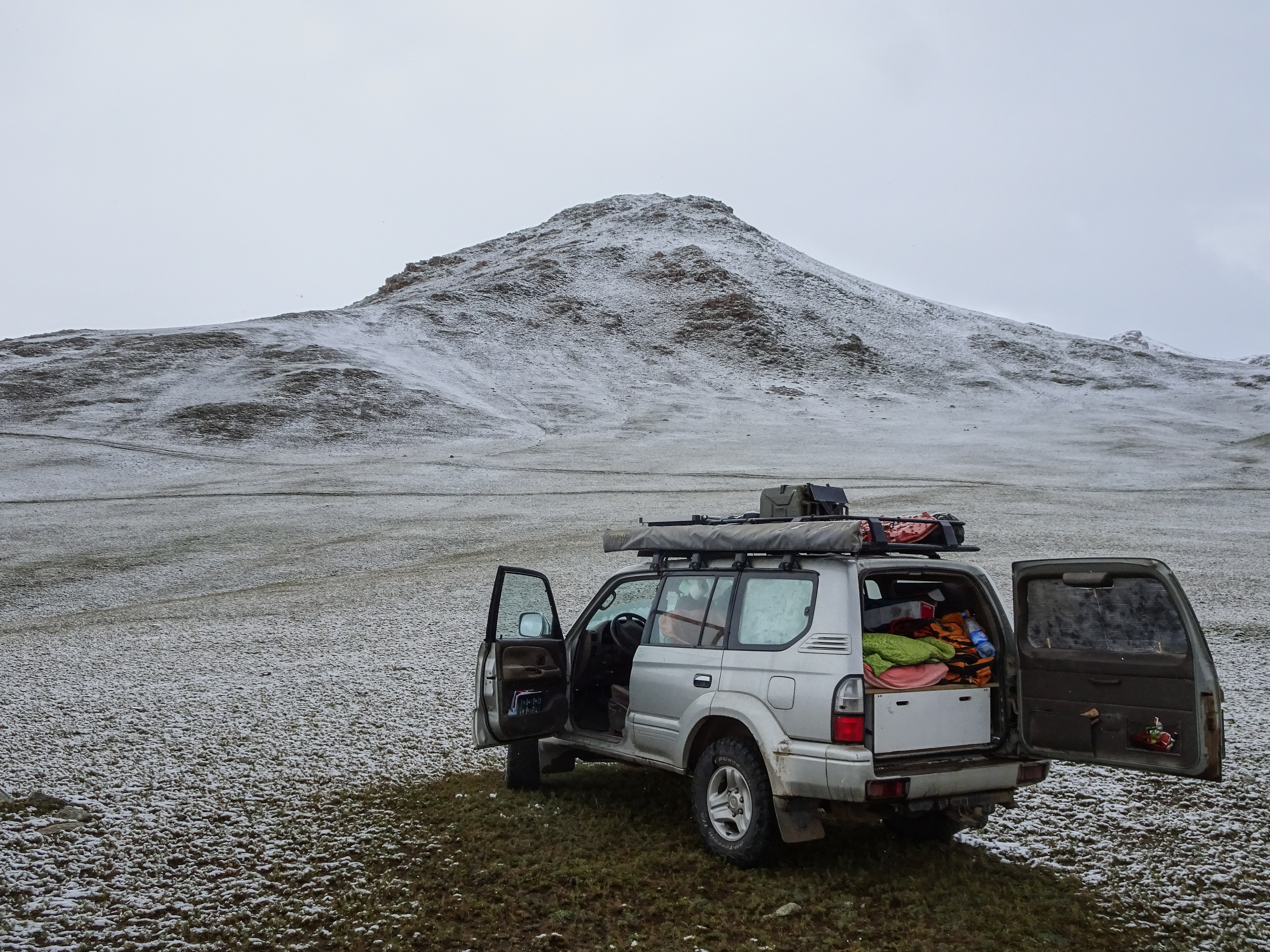 Waking up in snow

Brutus ate another stabilizer bar bushings this day. I installed a shitty Chinese one that I found in a villages on the way, in a very cold and windy town. That took about 2 hours because they were the wrong size so I used my file to make it bigger. There were a lot of people walking by but no one seemed interested in anything. Luckily there was an Austrian motorcyclist who stopped to say hi, which kept my spirit up. The combination of amazingly epic landscapes and crummy wild west style towns is quite. After getting some supplies, I left this crummy little town and ended up in the mountains again. There was snow scattered around. After a few hours I arrived in Moron, a medium sized town in the middle of nowhere. There, I went to a hotel and had a reasonably tasty dinner with a beer. I didn’t like the price of the roomsand decided to find a spot in the hills near town. 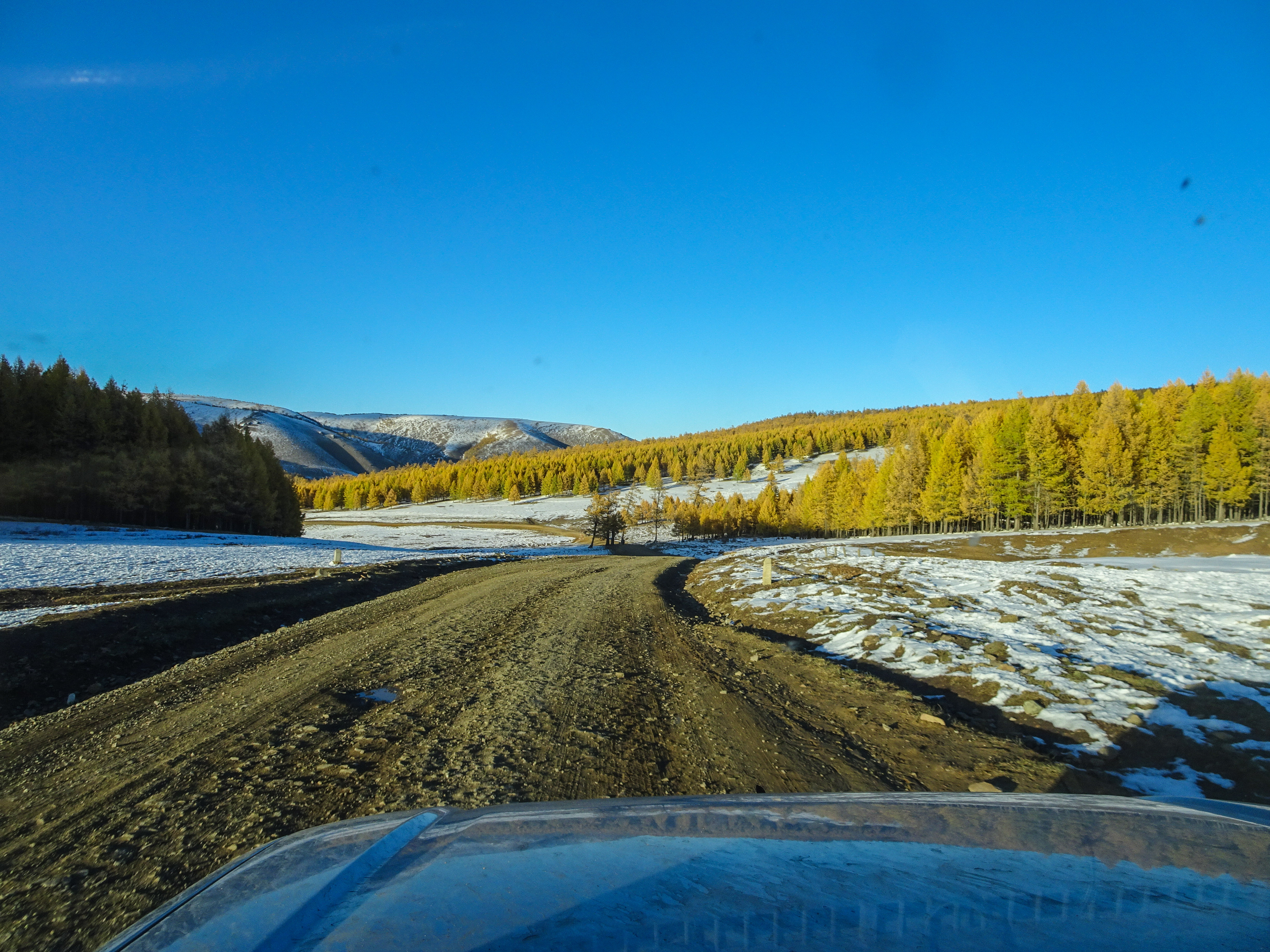 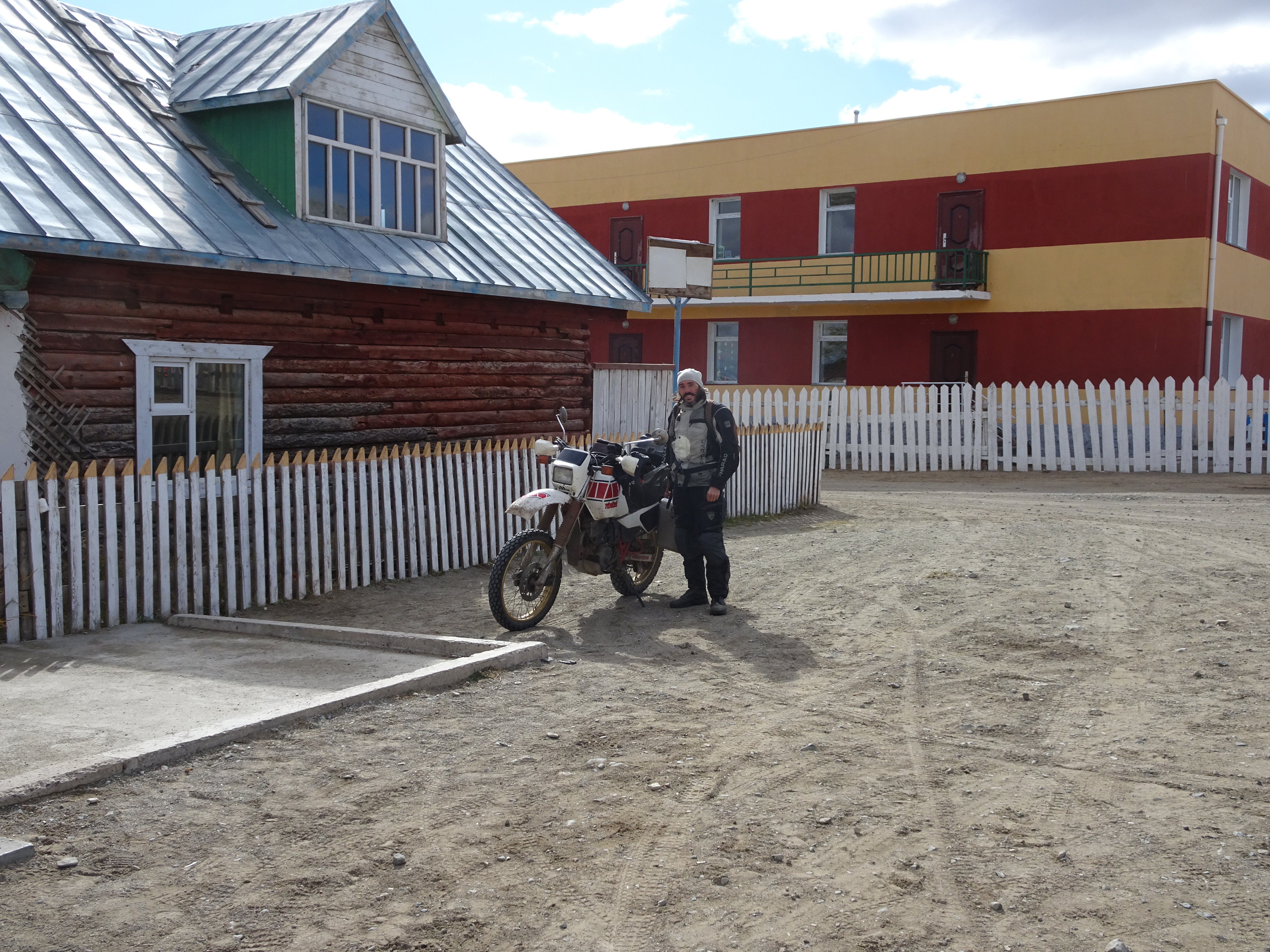 I found some more Chinese quality bushings in Moron to install later. There were roadworks near the town, and to get onto the main road, I had to drive all the way around to the other side to get on a dirt road that looped around town. Strange! In a few hours I drove to the south shores of lake Khuvsgul (Khatgal village), where I found an empty tourist town. Even the tourist information cabin was locked down. It was clearly not the main season anymore. But I got some cool pictures out of it. Since there wasn’t anything in Khatgal town, I drove to the east side of the lake to find a camp spot. This was probably the worst track of the whole trip until then. there were huge holes, mud and sludge and some mirky river crossings. Right after finding a nice level spot, a couple on a motorcycle drove up to me and asked me to help them out with something near their yurt. The batteries of their pickup truck were dead so they asked me to tow it until it started. I was invited inside to have some milky tea and cheese, until the couple left for town. 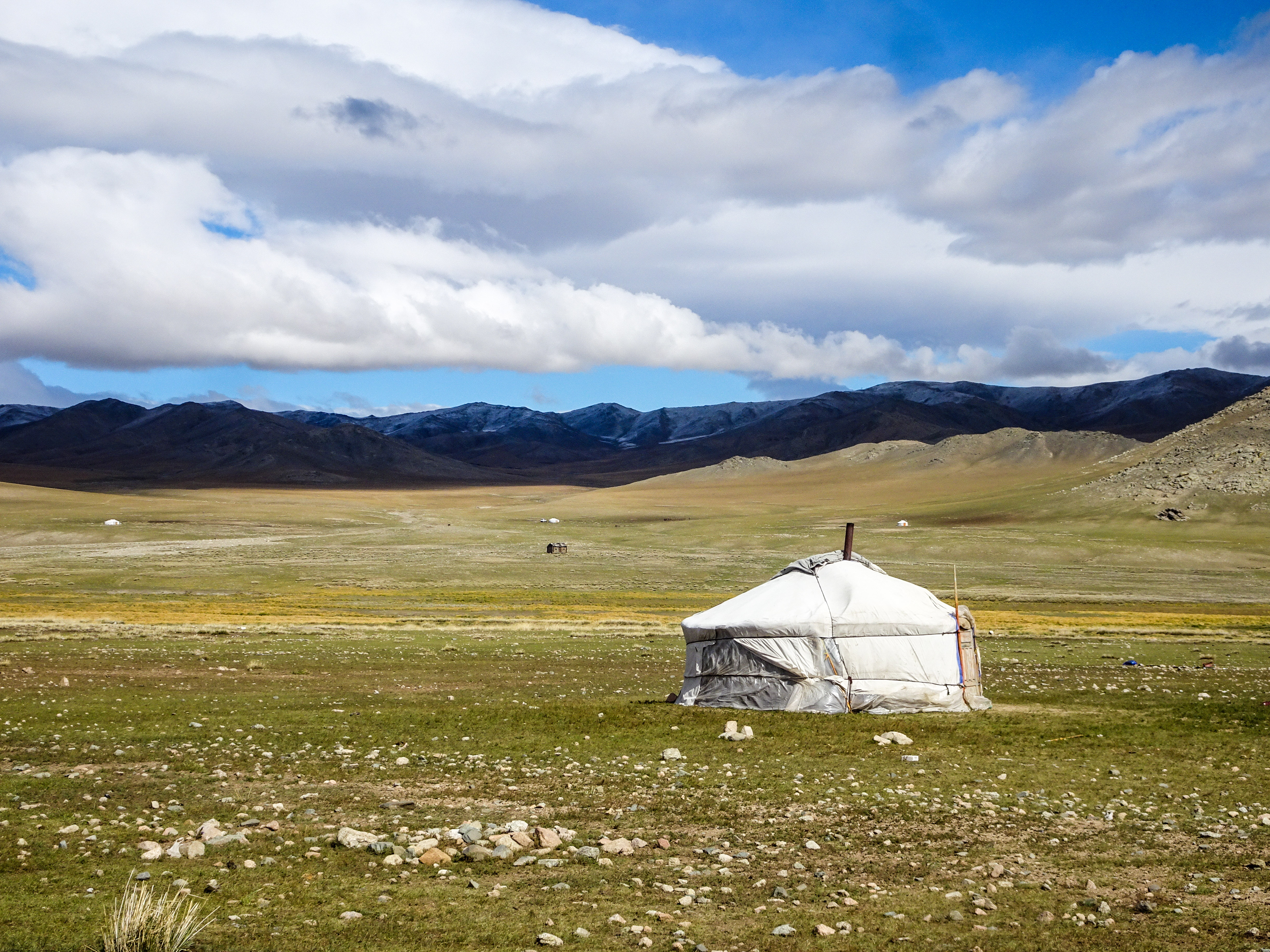 One of the thousands of sparsely scattered around yurts 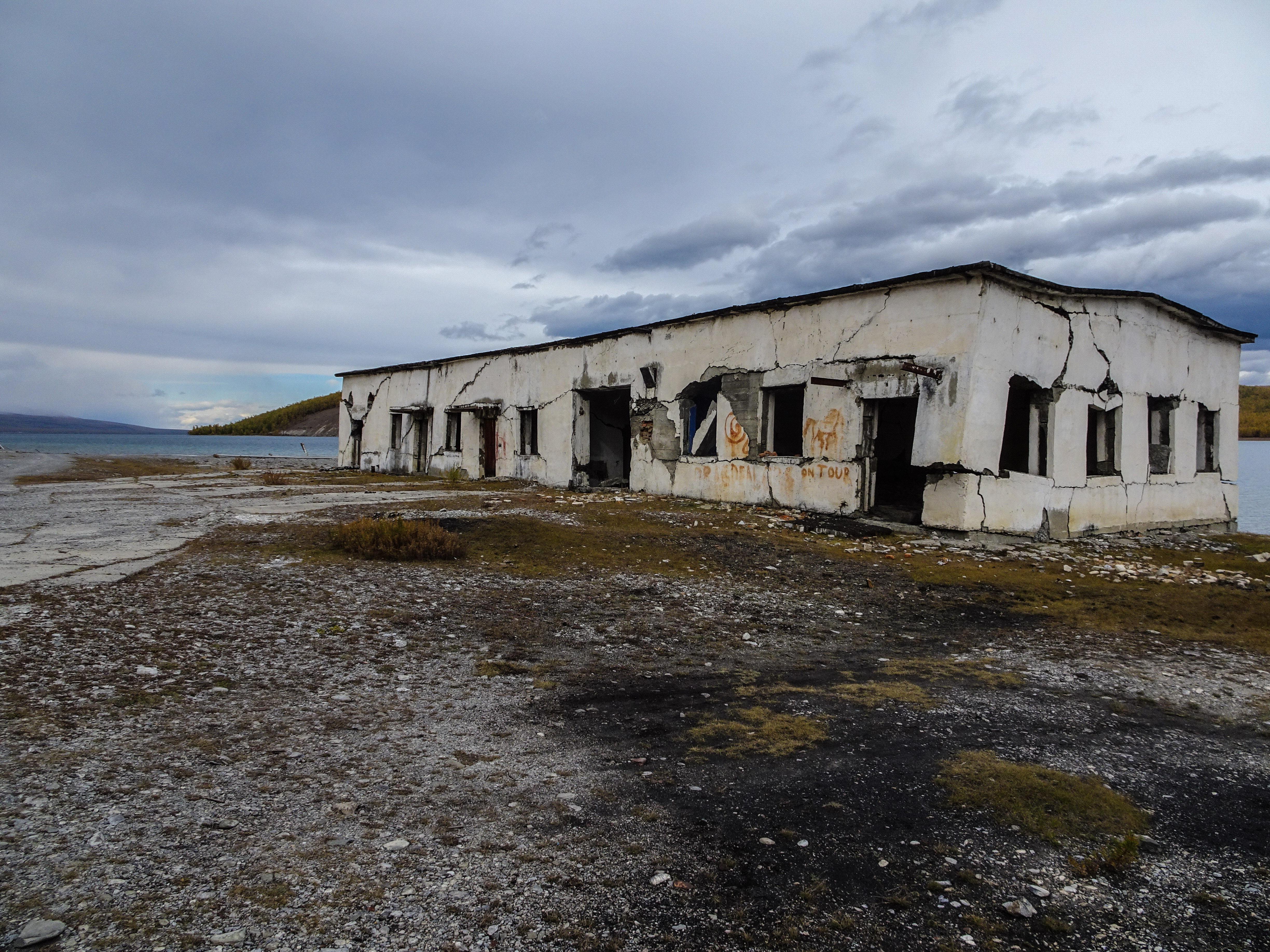 A creepy run down building next to the lake 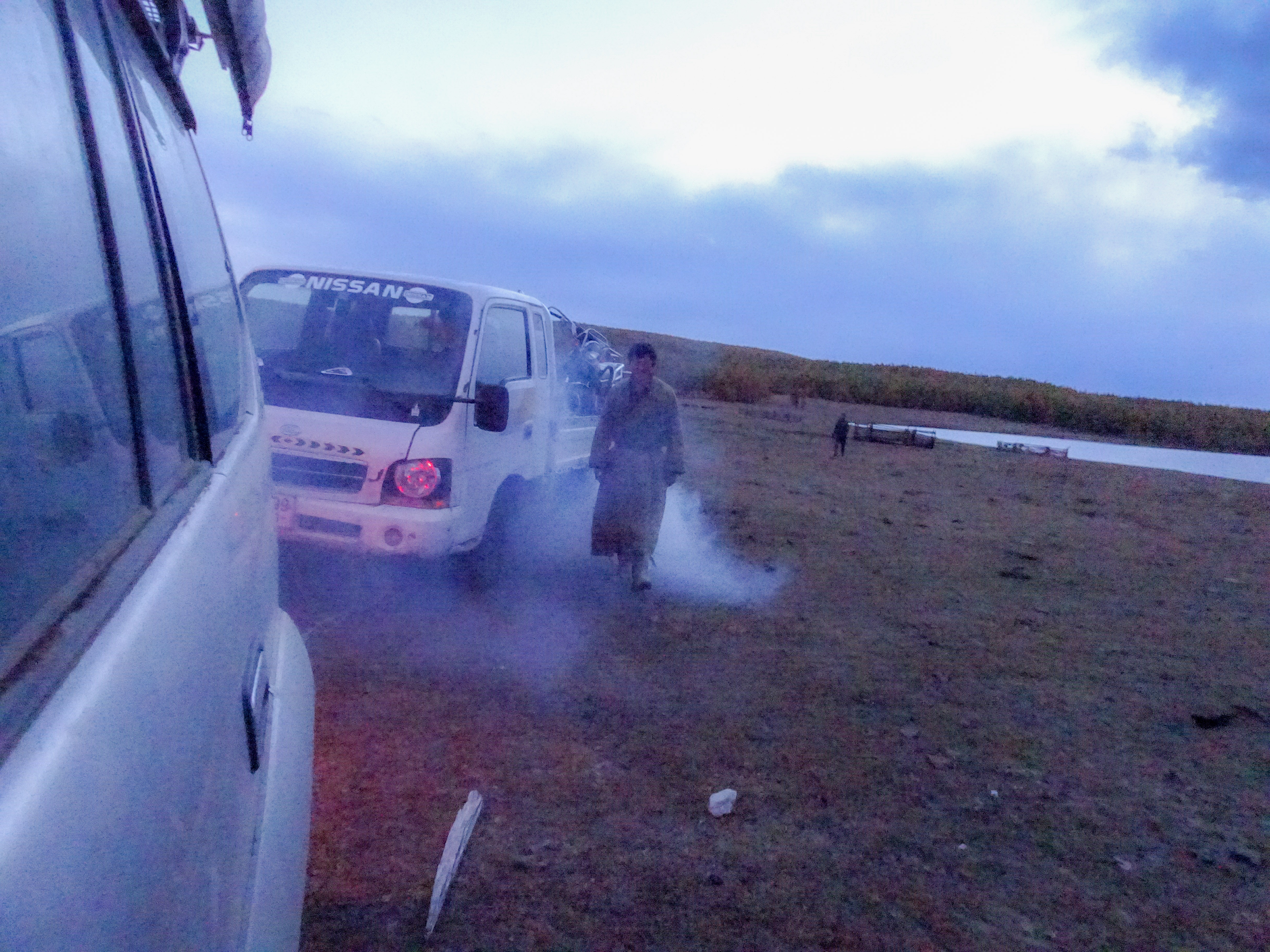 Helping this guy out

It was a cold and beautiful sunny morning with a very nice view of the lake. The plan was to drive to a small town called Tsagaan-Uur and continue from there to a bigger road via a connecting track. After a couple of hours driving I reached the village and fueled up. But when I wanted to continue I noticed there was a river in the way. When I asked a local guy, he said it wasn’t possible to cross with a car. So drove back part of the way and took another path to the main road, sleeping another night in the car on the way. It was about 200 km from there on to the main road, and 50 more to another place to sleep (near Khutag Undur). The whole way from the lake to this camp is full of pine trees. A beautiful area, and my parking spot was ridiculous. 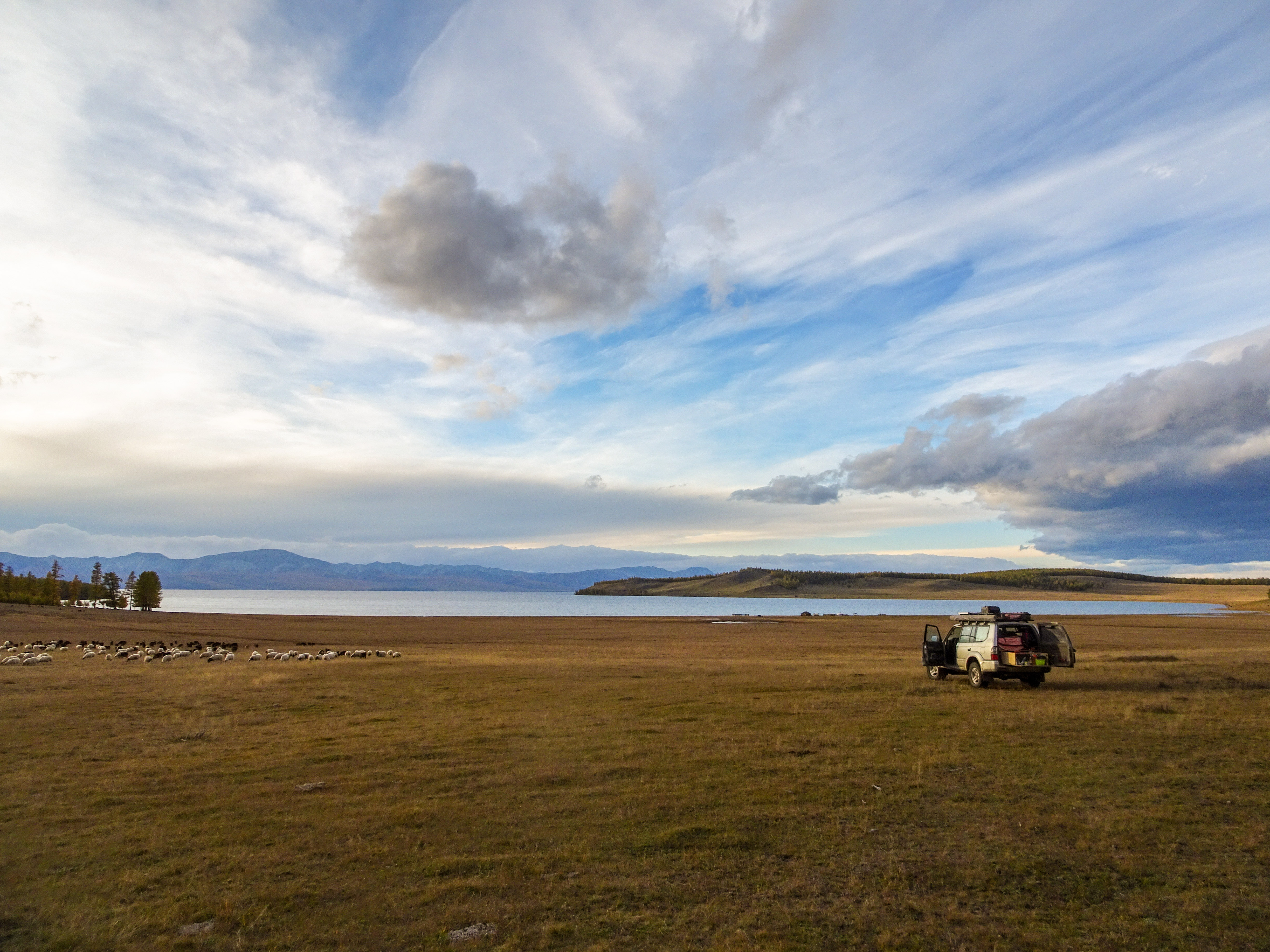 Waking up in a Bob Ross painting 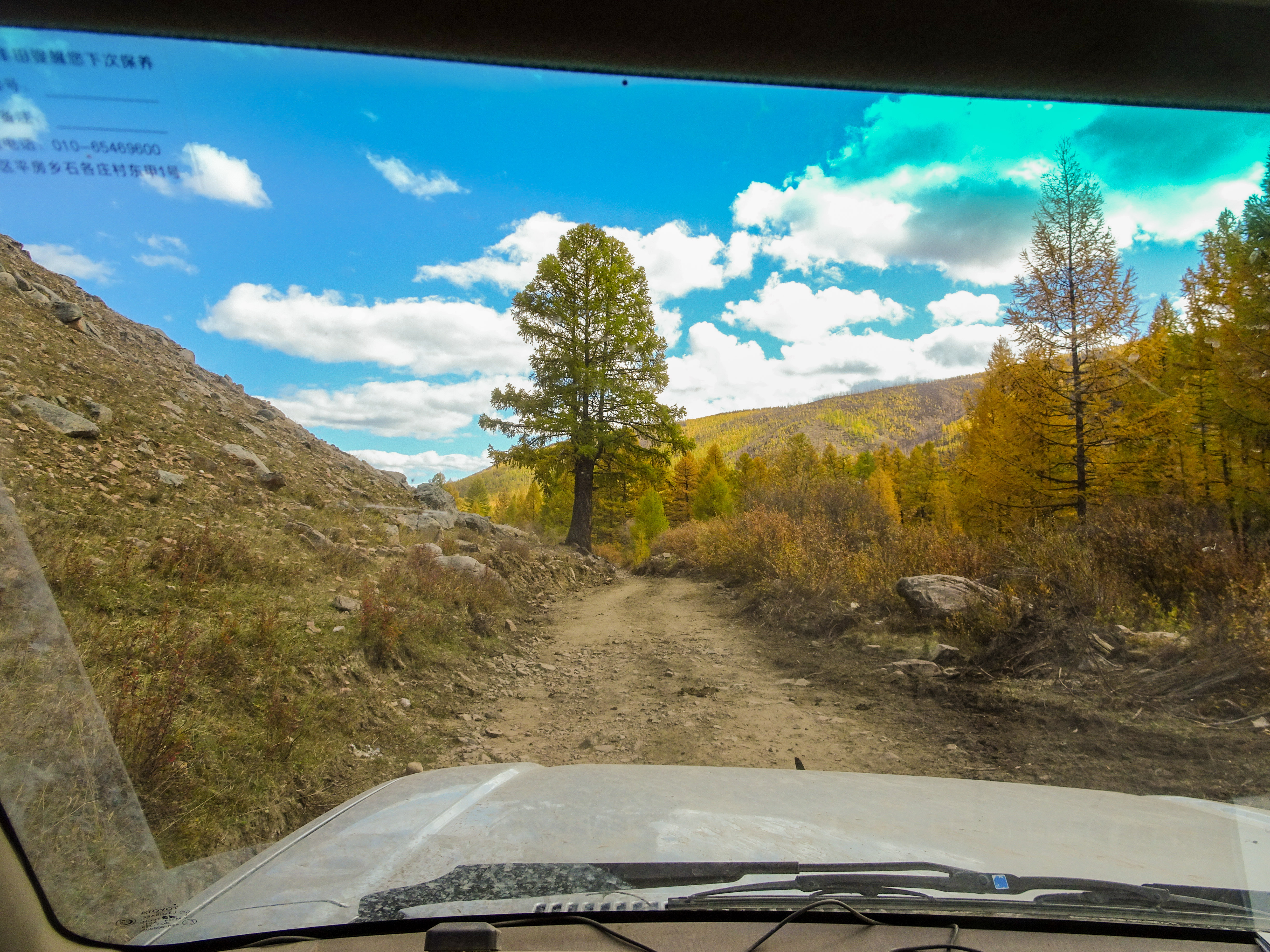 Many kilometers of this 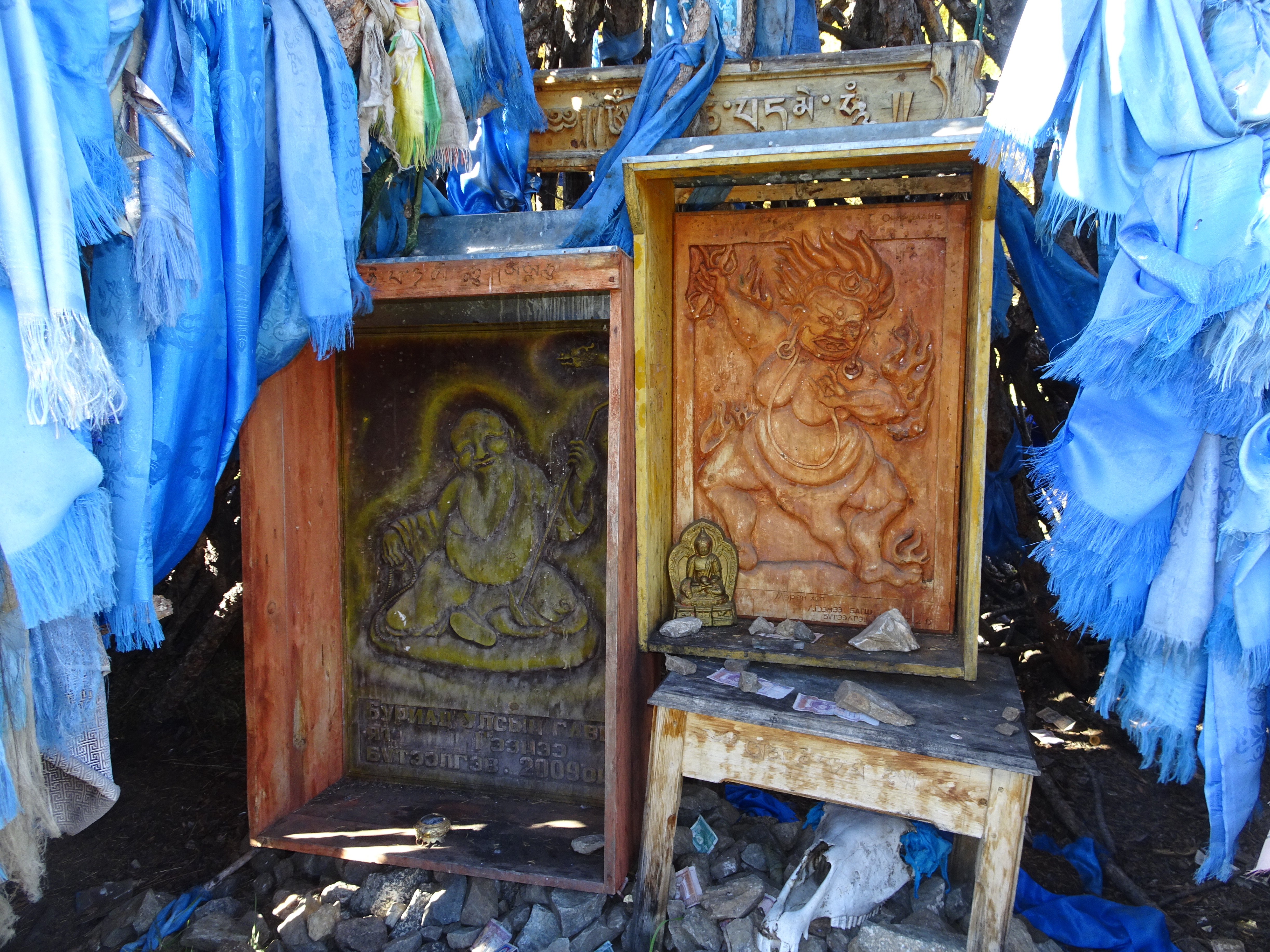 Some of this stuff along the way

Ridiculously awesome spot to wake up at

On the map (I started using Osmand mapping app) I saw that there was an old volcano on the way to Ulaanbaatar named Uran Togoo. 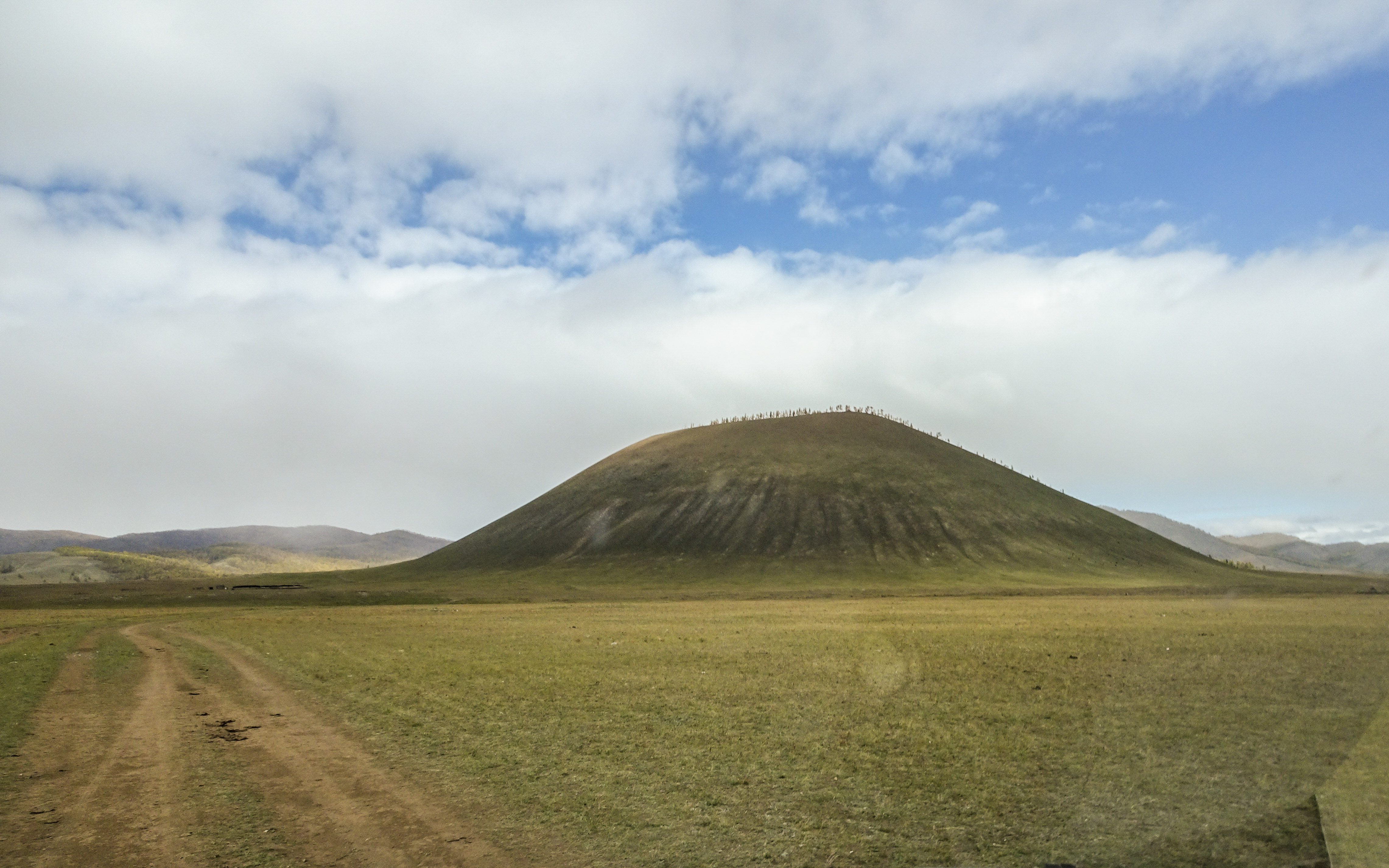 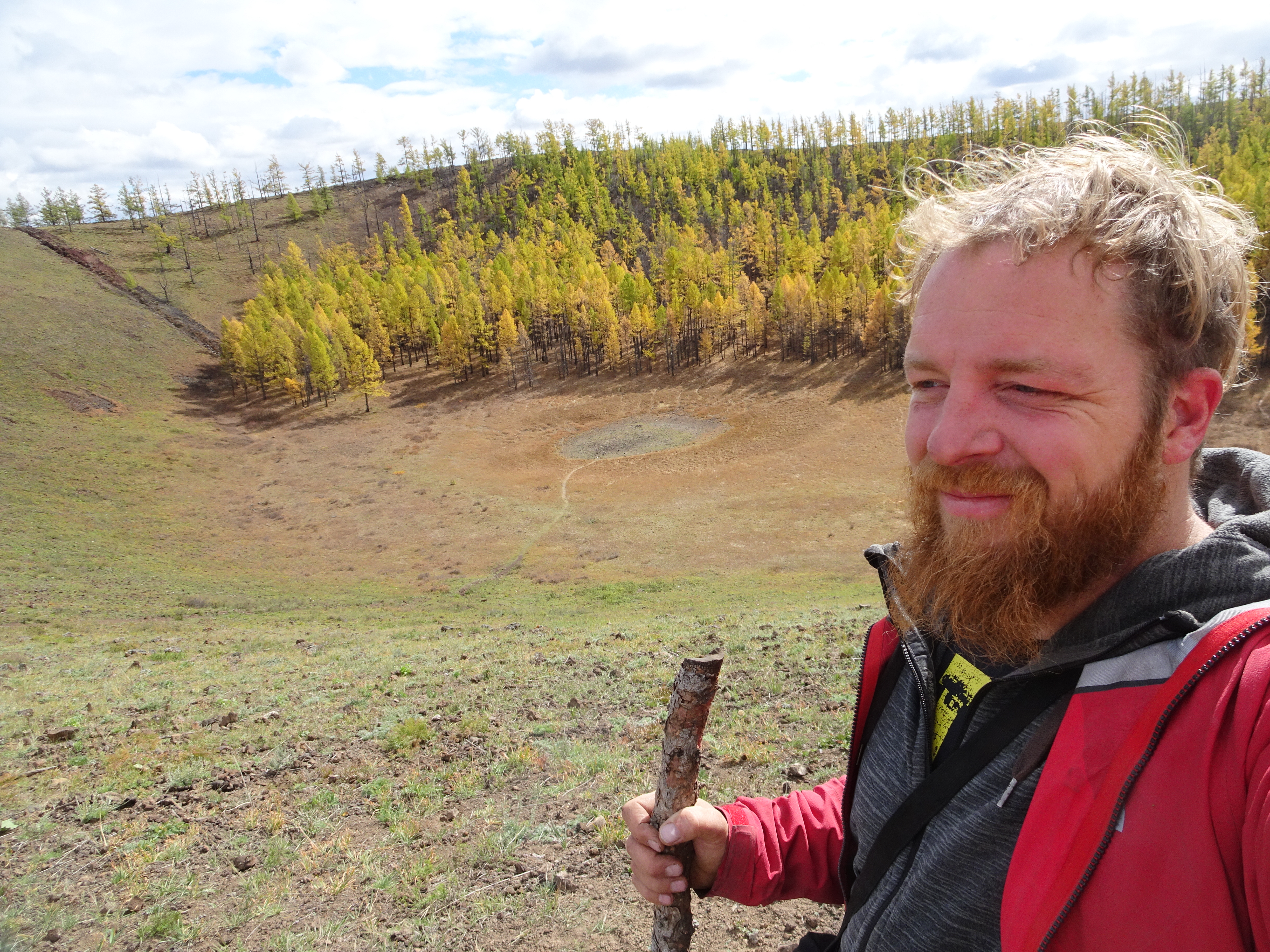 On the rim of the volcano

From there I drove straight over mainly tarmac to Ulaanbaatar, to the famous overlander hostel Oasis. Here, Pete and Jen had also arrived a bunch of days earlier. And perhaps half an hour later, also Charlotte and Frederik walked in. We went out to dinner that night in a nice Indian restaurant on the other side of town.